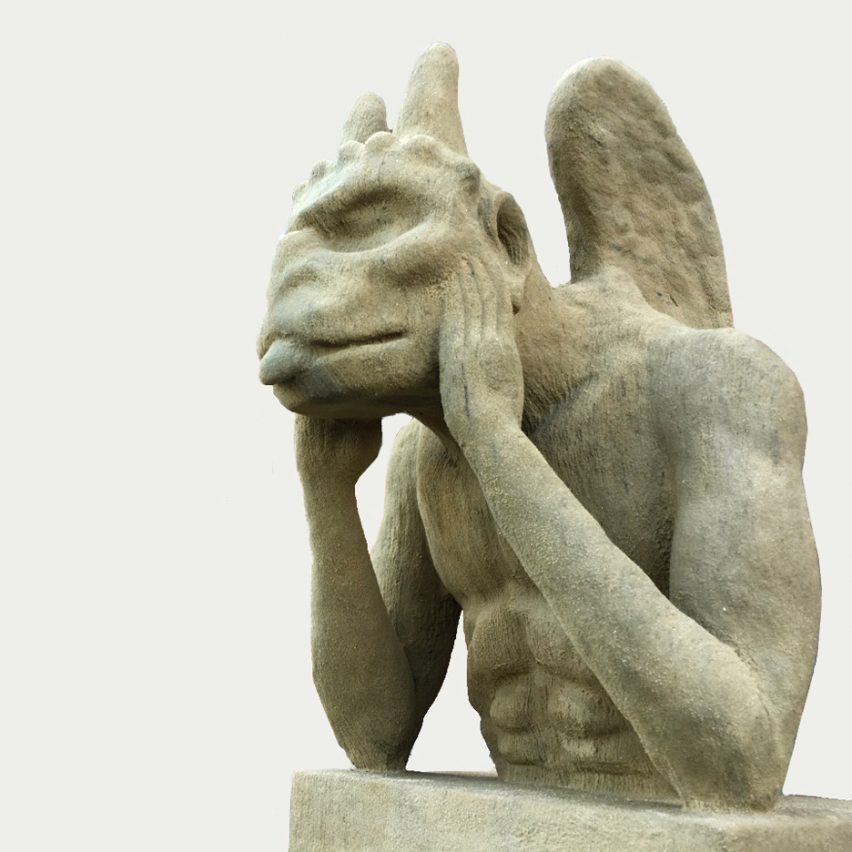 Dutch company Concr3de has proposed rebuilding parts of Notre-Dame Cathedral from the ashes of the fire using 3D printing, and has already printed a replacement gargoyle.

Concr3de, which was founded by architects Eric Geboers and Matteo Baldassari in 2016, used 3D scans to reproduce Le Stryge, a demon statue that sits on the roof of the gothic cathedral in Paris that was severely damaged in a fire last week.

A mixture of limestone and ash – similar to the materials found after the fire – was used as the material to replicate the iconic gargoyle, which was added to the cathedral’s roof during the 19th century restoration by architect Eugène Viollet-le-Duc.

“We saw the spire collapse and thought we could propose a way to combine the old materials with new technology to help speed up the reconstruction and make a cathedral that is not simply a copy of the original but rather a cathedral that would show its layered history proudly,” Geboers told Dezeen.

Geboers believes using the materials left behind after the fire would address some philosophical problems posed by rebuilding Notre-Dame to the original design while using new materials.

“Isn’t a copy just a fake? Simply copying, pretending there never was a fire, would be a historical forgery,” he said.

The Lutetian Limestone that was originally used to build Notre-Dame, along with much of Paris, was taken from mines that have now been buried under the expanding city. Large oak beams that made up the now-destroyed timber roof of the cathedral were made from trees felled in the 13th century.

Concr3de’s proposal would allow the original material of the damaged building to be used in its reconstruction. Even the limestone damaged by the high temperatures of the blaze could be used in the  process.

“We would break down the limestone to the right grade and the fire damage would not have an effect,” explained Geboers.

Concr3de used scans of the stature that were readily available on the internet and printed it using an Armadillo White, a small 30 x 30 x 30 centimetre printer.

“It’s a custom inkjet 3D printer that is fine tuned to work with stone and stone-like materials,” he said. “It prints with 0.1 millimetre precision and the cool thing about these printers is that any geometry is possible without the need for supports. It also allows for significant material customisation.”

Goebers believes this technique could even be hypothetically used to print replacement stone vaults to replace those that were damaged when the collapsed spire crashed through the roof to the nave below.

“It would most likely be cheaper to print the lost pieces than to cut new stone,” he said.

This technique, says Concr3de, could be used to rebuild Notre-Dame in the tight timeframe of five years promised by the French president, despite experts predicting it could take decades.

The secretary general of France’s manual trades organisation, Les Compagnons du Devoir, warned in a column for La Croix that it would take years to hire and train the hundreds of stonecutters and masons required to work on a project of this magnitude.

With over €1 billion (£866 million) pledged to rebuild Notre-Dame the restoration won’t be short of funds. The issue facing architects now will be which version of the cathedral is rebuilt.

French prime minister Edouard Philippe has suggested holding an international competition to potentially design a more modern version of the 19th century spire that was lost in the fire.