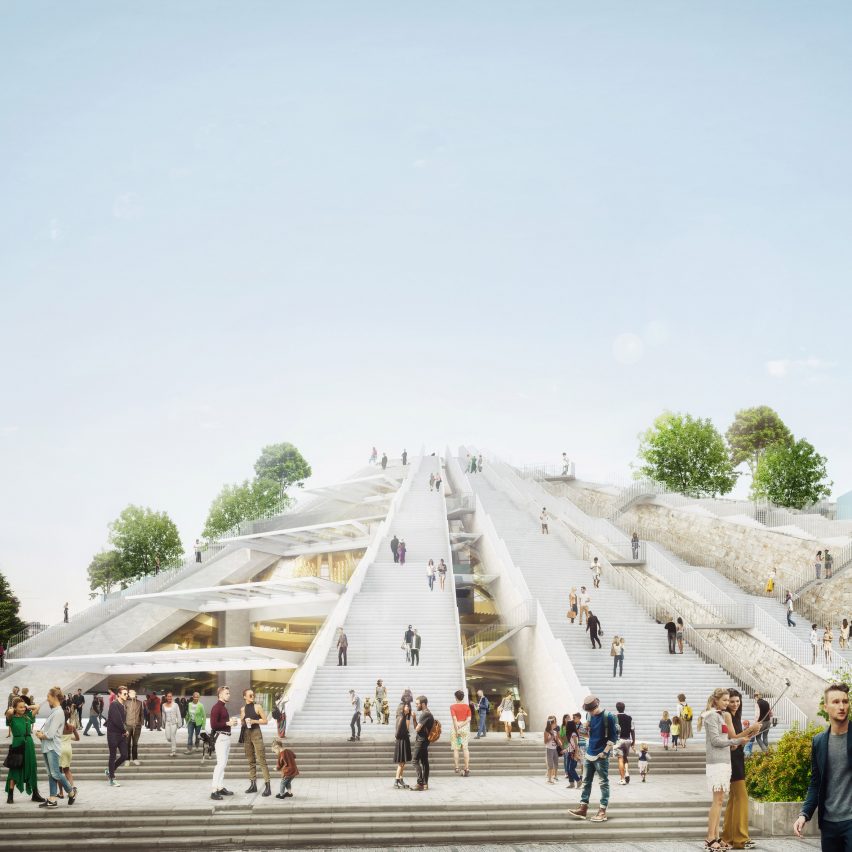 Work has begun on the conversion of the 1980s brutalist Pyramid of Tirana in the Albanian capital into a youth-focused cultural hub.

Dutch-architecture studio MVRDV is set to convert the 11,835-square-metre pyramid in central Tirana into a “peoples monument” that contains cafes, studios, workshops and classrooms where free lessons will be available to young Albanians.

Built as a museum dedicated to former communist leader Enver Hoxha, the Pyramid of Tirana opened in 1988 but closed three years later following the collapse of Communism in the country.

It was subsequently used as a temporary NATO base and a nightclub before being left to deteriorate being used as a canvas for graffiti, a place for socialising and a large slide.

“It is striking and interesting to see how the country struggled with the future of the building, which on one hand is a controversial chapter in the country’s history, and on the other hand has already been partly reclaimed by the residents of Tirana” MVRDV‘s founding partner, Winy Maas said.

MVRDV will strip the structure back to its robust concrete shell with a plaza created alongside stacked climate-controlled classrooms within the building, which will be renamed the Pyramid.

This plaza will be accessed by numerous passageways on the ground floor that will be left open to invite the public to engage with its programmes.

The original glass facade at the front of the structure will be replaced by large glass awnings that can be closed during bad weather.

The sloped facade and roof of the pyramid will be lined with steps constructed using aggregate from the original stone tiles that covered the facade. Several additional enclosed classrooms will also be built on the roof.

One of the original sloping roof beams will be preserved so that the building can continue being used as a slide by visitors.

“The challenging part is to create a new relationship between the building and its surroundings,” Maas said.

“I am confident our design establishes this. I am looking forward to seeing young people and for the first time older people climbing the steps to the rooftop!”

MVRDV is also constructing Albania’s tallest building in the city, which will have a pixelated facade when it completes.

As part of the city’s development Danish studio BIG has designed a “bow-tie-shaped” theatre for the capital. However, the demolition of the previous theatre to make way for it became the focus of protests in the city.