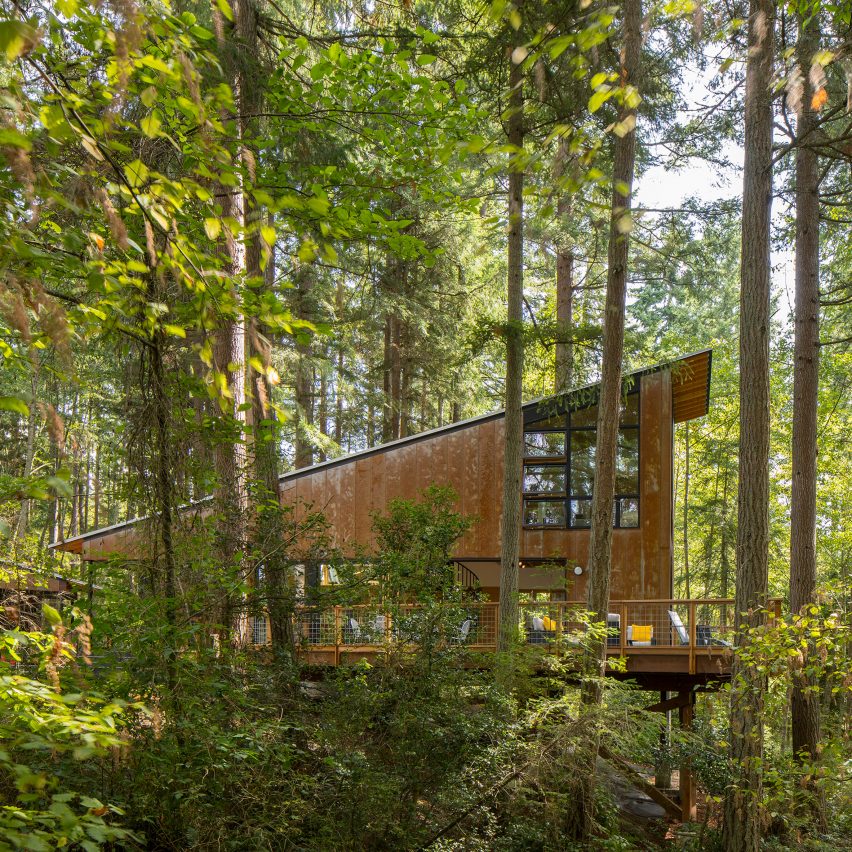 A pair of Corten-clad dwellings with sloped roofs form a nature retreat in the Pacific Northwest designed by US architect David Van Galen for himself and his wife.

Called Little House/Big Shed, the project is located on Whidbey Island in the Puget Sound, just north of Seattle.

Per the name, the project consists of the main cabin and a smaller structure, used as a studio and guest quarters.

Architect David Van Galen designed the retreat for himself and his wife, who have been visiting the forested island for decades. Years ago, they began hunting for property there and ended up purchasing a five-acre site filled with alder and Douglas fir trees.

Van Galen then set out to create a cosy home that made the most of its tranquil setting.

“The program was simple: a secluded, small home for a couple who sought a place to prepare and enjoy meals, to read by the fire, to write and paint, to lodge guests and to sleep among the trees,” he said.

“This reduced the overall mass of the House, and allowed the siting of House and Shed to etch a place in the woods, pivoting at the remains of an old-growth fir and a younger tree,” the architect said.

The home is approached via a new gravel drive that follows an old tractor path. The dwellings are located at the edge of a ravine and are connected by an outdoor patio.

A portion of the larger building extends over a hillside, where it is supported by wooden pillars.

Both buildings are roughly rectangular in plan and are topped with sloped roofs clad in standing seam metal.

Facades consist of Corten steel panels, aluminium-clad windows and cedar trim. The steel siding was left to weather over time.

“While architectural applications of Corten are typically pre-oxidised to provide a uniform patina, the steel in this project has been left to naturally rust, bringing the House and Shed into dialogue with their surroundings,” the architect said.

“Much like the trees themselves, each building surface uniquely responds to time, wind, water and sun.”

Inside the main dwelling, the ground level holds an open-plan space for cooking, dining, and lounging. A spiral staircase leads to a bedroom on the upper floor.

The secondary building contains a single large room and a bathroom.

Wooden flooring and cabinetry are among the earthy finishes that help tie the home to its context. Neutral hues are paired with pops of colour, such as a plush red sofa.

The architect incorporated a number of sustainable elements into the project, including a 9.3-kilowatt solar array with battery backup that enables the home to be net-zero.

The retreat also has low-flow fixtures, high-efficiency appliances, and an air-source heat pump with an in-floor hydronic loop. LED lighting is used throughout the buildings.

While designing the project, careful attention was paid to the surrounding forest.

One of the site’s oldest trees lies to the south, while a row of firs is found on the north. A small number of alders were removed during construction and will be used in a high-efficiency, wood-burning stove for several seasons.

“Disturbed portions of the site are being replenished with native plantings including salal, vine maples and ferns,” the architect added.

Located about two hours by car from Seattle, Whidbey Island is a popular destination for city dwellers seeking time in nature.

Other projects there include a historic inn that was updated by brothers Mike and Matt French with contemporary elements, and a family retreat by MW Works that features walls made of cedar, stone and glass.

Photography is by Lara Swimmer.