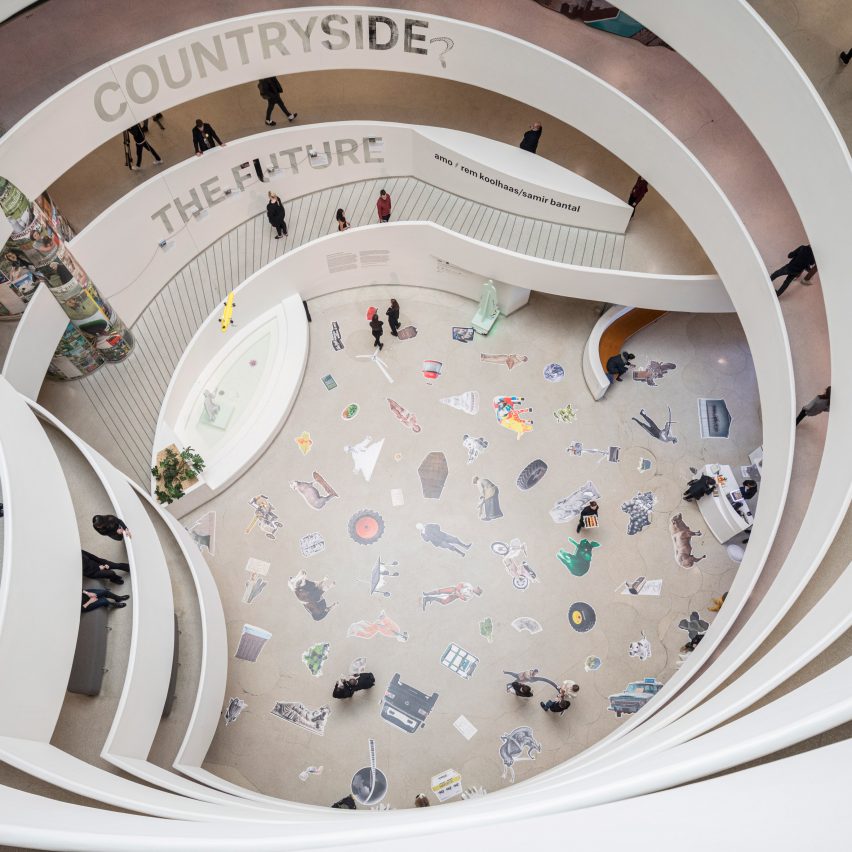 Koolhaas developed the Countryside, The Future exhibit with his research studio AMO, its director Samir Bantalm and a series of collaborators. The aim is to highlight advancements in rural areas through a series of case studies. 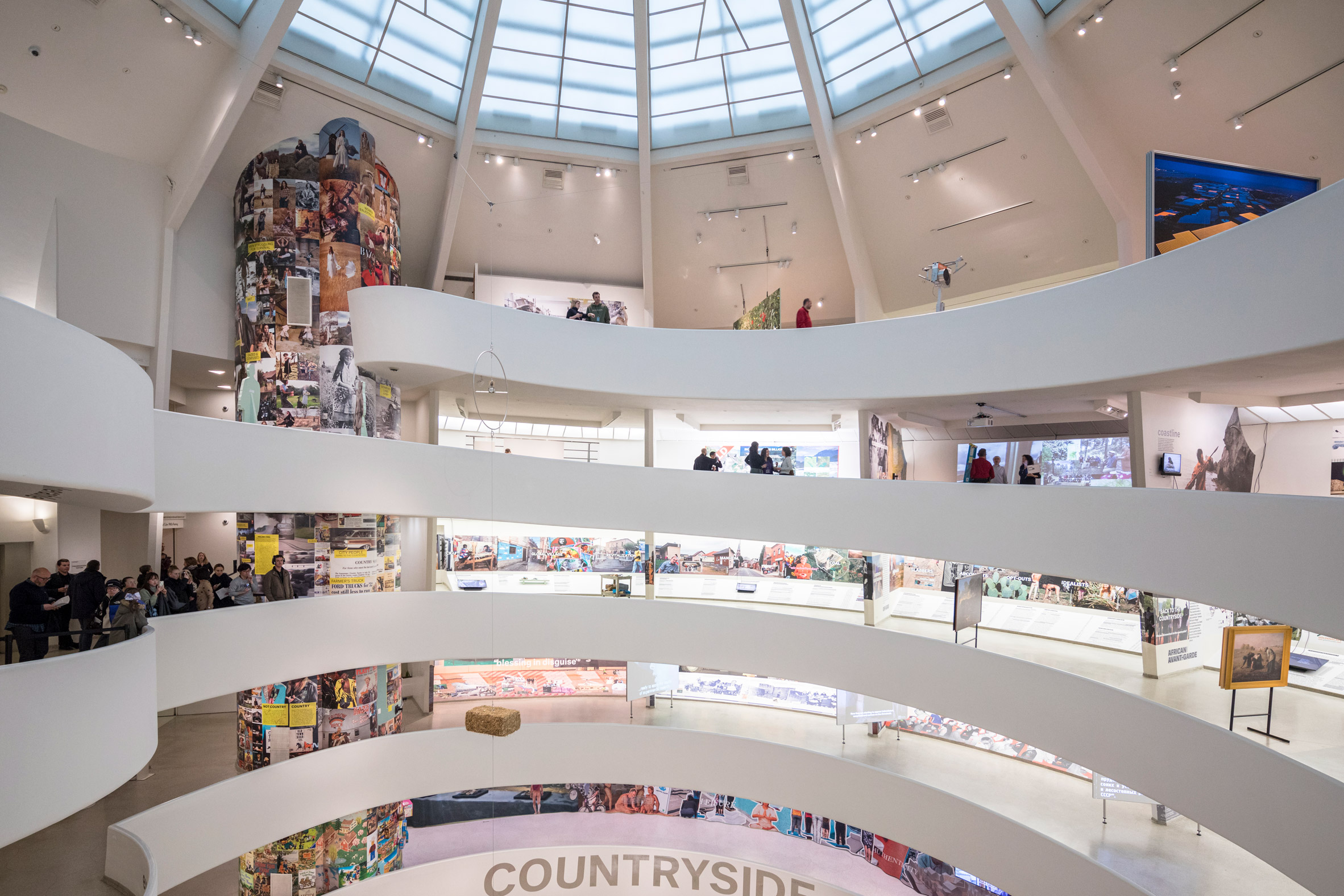 “It’s a show about sociality, anthropology and politics.”

Koolhaas’ talk took place in the Guggenheim‘s lecture theatre ahead of the exhibit’s opening, which marks 40 years since he launched his city-focused book Delirious New York in the same space, and a drastic switch in topics. 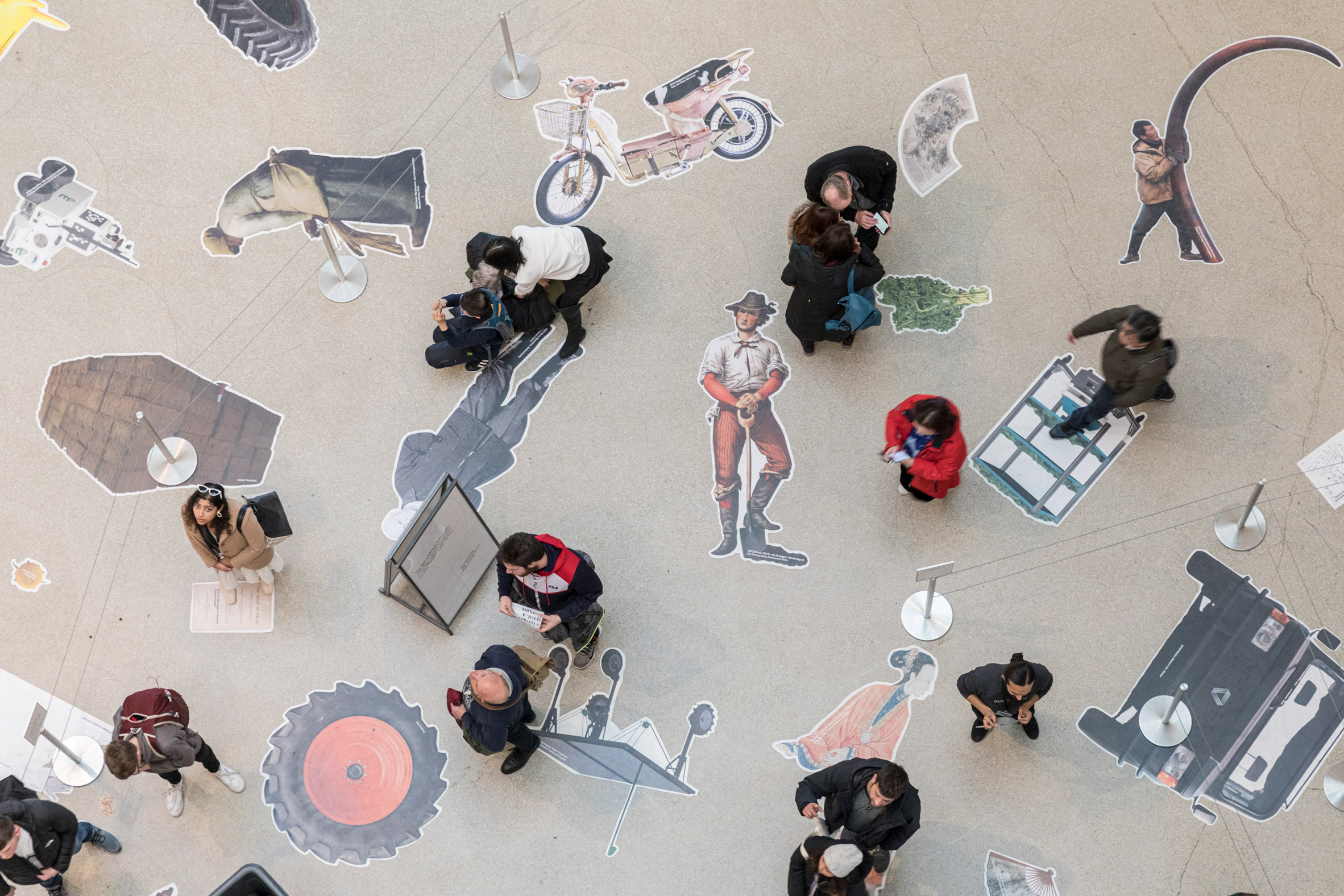 He said he chose to move his focus away from cities as the “massive neglect of the countryside” had made him “nervous” and “dissatisfied” in the past 10 years. The Guggenheim exhibit aims to rectify this.

“This show’s explicit agenda is to put the countryside on the agenda again,” he said. 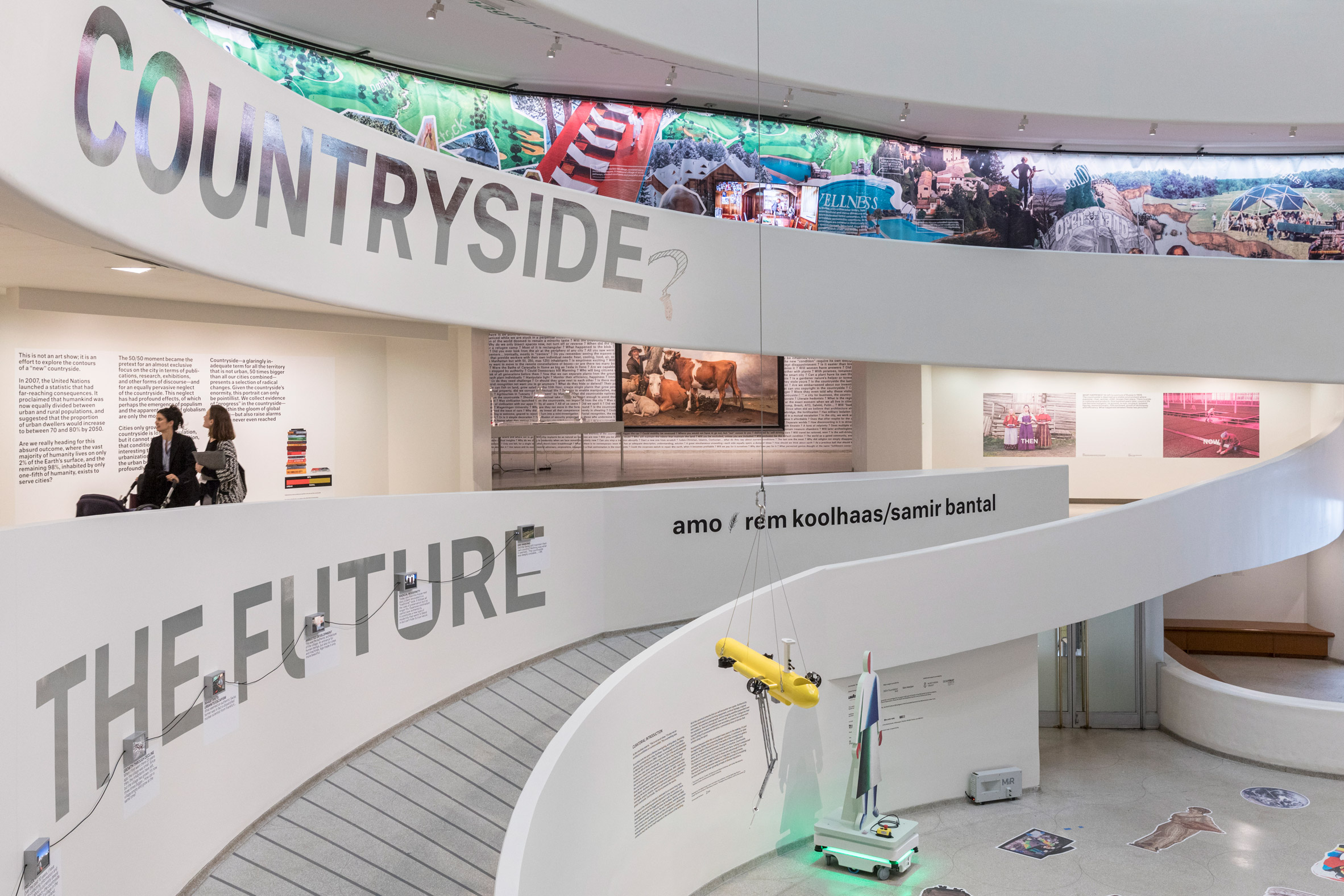 Koolhaas had previously spoken about his concerns in a 2013 video interview with Dezeen, in which he said that the attention of his firm OMA had shifted away from “cliche” cities to non-urban areas.

He later argued in a 2017 interview that the neglect of rural areas contributed to the election of Donald Trump as US president.

Countryside, The Future aims to offer an overview of rural areas from its historical importance, its importance in the 20th century, to its current state and how it can be used in the future. “The museum is a wonderful tool for any author to present a narrative,” Koolhaas said. 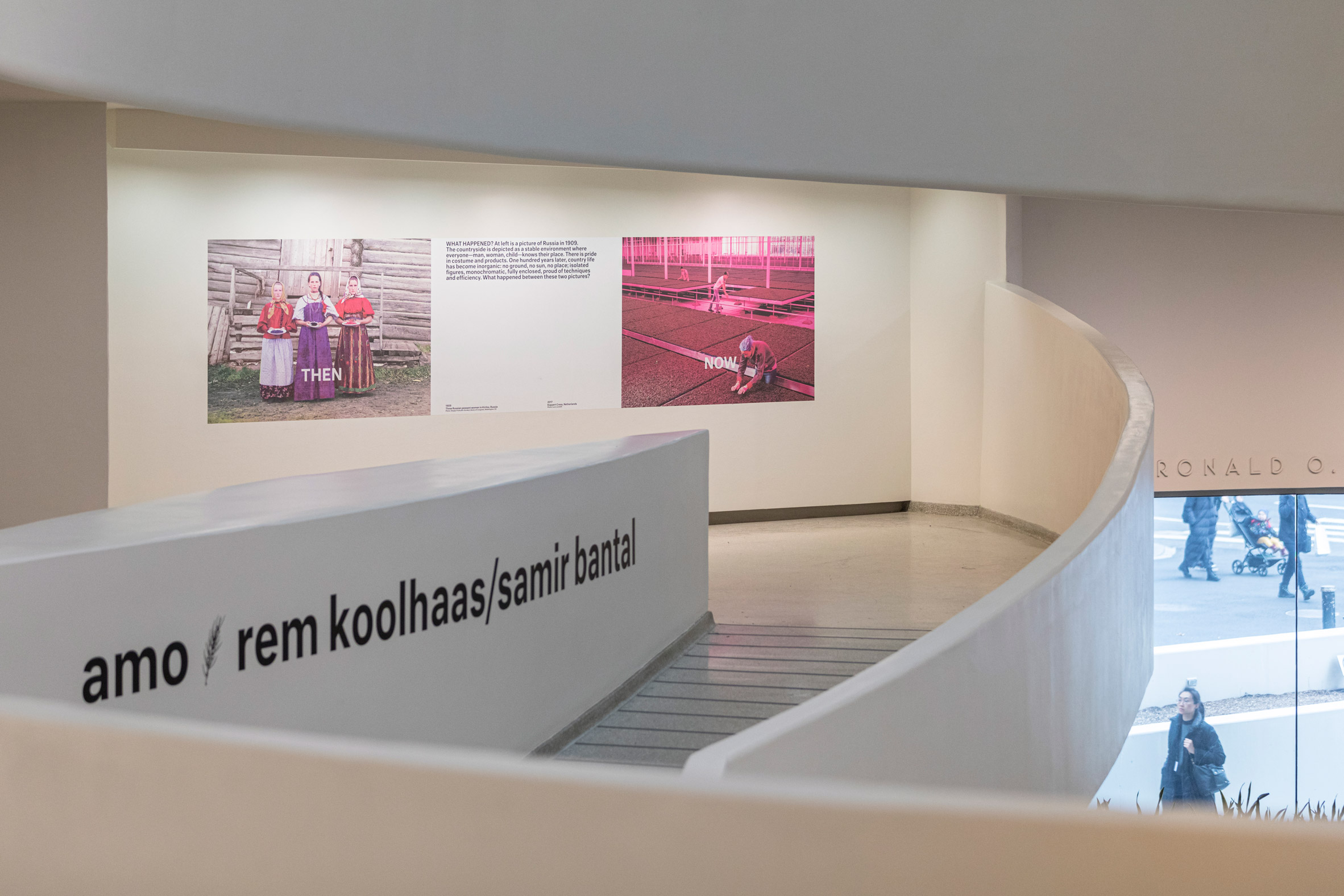 Visitors are first made aware of the exhibition by a huge Deutz-Fahr tractor parked outside. “We were happy to announce it with the brutal and rare presence in New York of a massive tractor,” he said.

Inside, the showcase aims to make use of the Frank Lloyd Wright-designed spiralling gallery. Each level is dedicated to a different theme and are covered in large images and texts that act like a continuous wallpaper – an idea that Koolhaas came to late in the process. 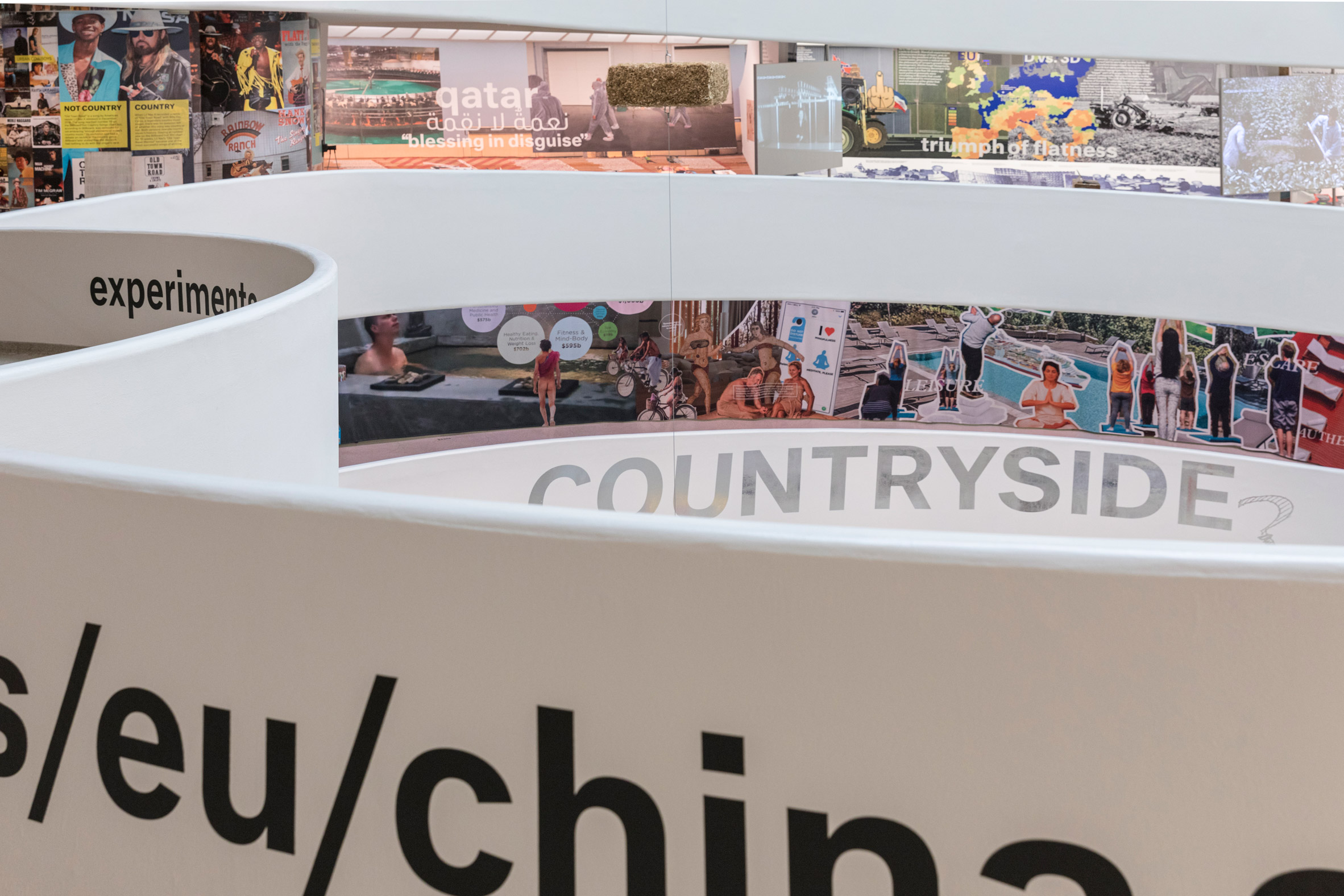 “Out of the blue, I get a phone call from work from Rem a year and a half ago and he says: ‘I’ve had a brainwave. Trash everything, we’re going to cover the whole museum in wallpaper’,” Troy Conrad Therrien, Guggenheim’s curator of architecture and digital initiatives, told Dezeen.

Journalist Niklas Maak and Harvard Graduate School of Design students have also wallpapered the large column that rises through the museum with images that address the theme in topics like fashion, women’s land army, cars, country music and toys.

The first level of the exhibit is adorned with Koolhaas’ essay titled ?, which poses many questions about rural areas. 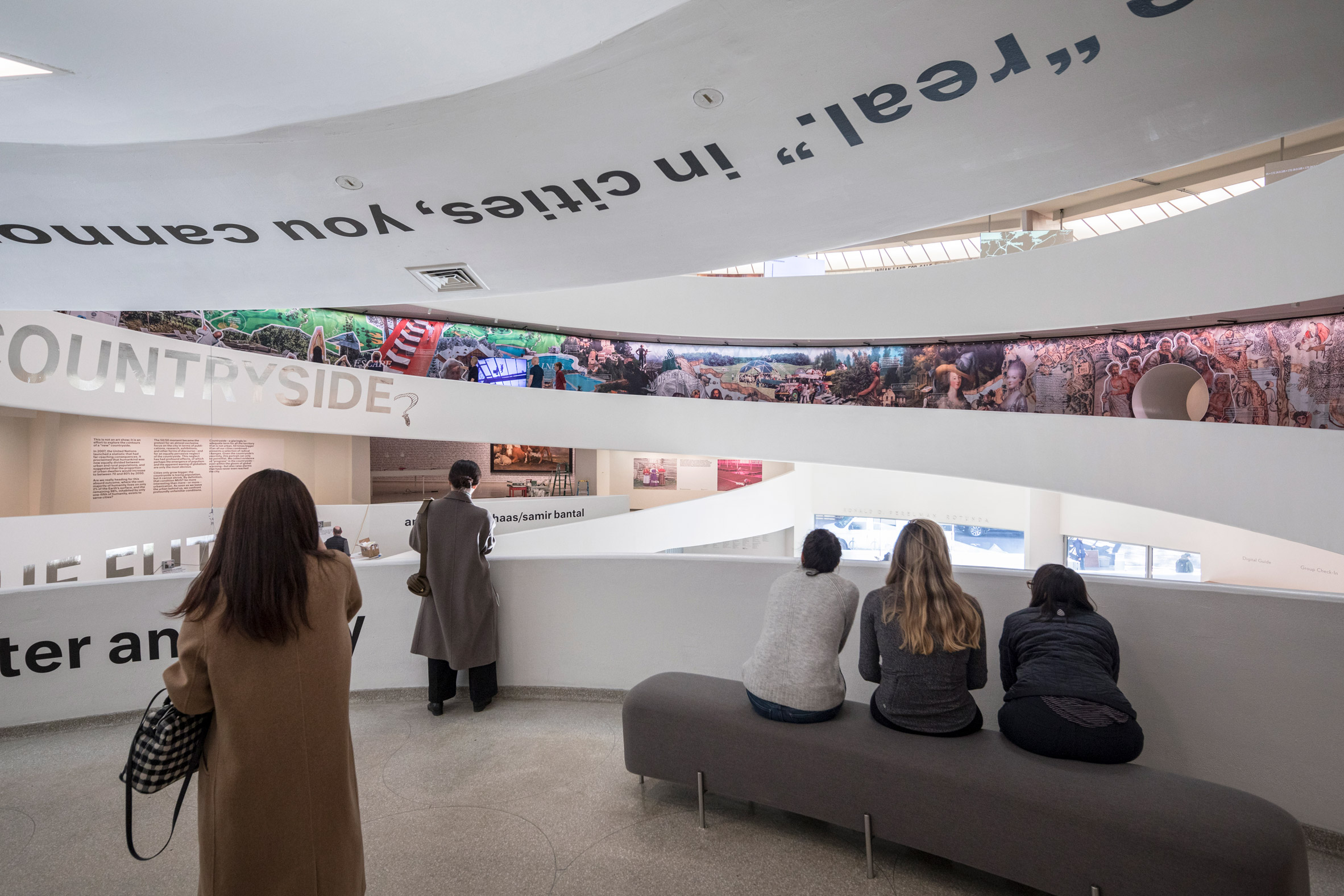 Level two, called Leisure and Escapism, is lined with a decorated curtain that traces the history of the countryside from Roman and Chinese cultures up to the way that the contemporary wellness industry is capitalising on it.

The “political redesign” of the countryside is addressed in eight case studies on level three that include examples of change in rural areas in the Soviet Union and Qatar.

Therrien said that although the exhibit features large passages of text, the experience remains “fundamentally different” to reading a book. “It’s closer to an opera or a film where you have an incredibly dense playbill, or a series of subtitles as you go,” he added. 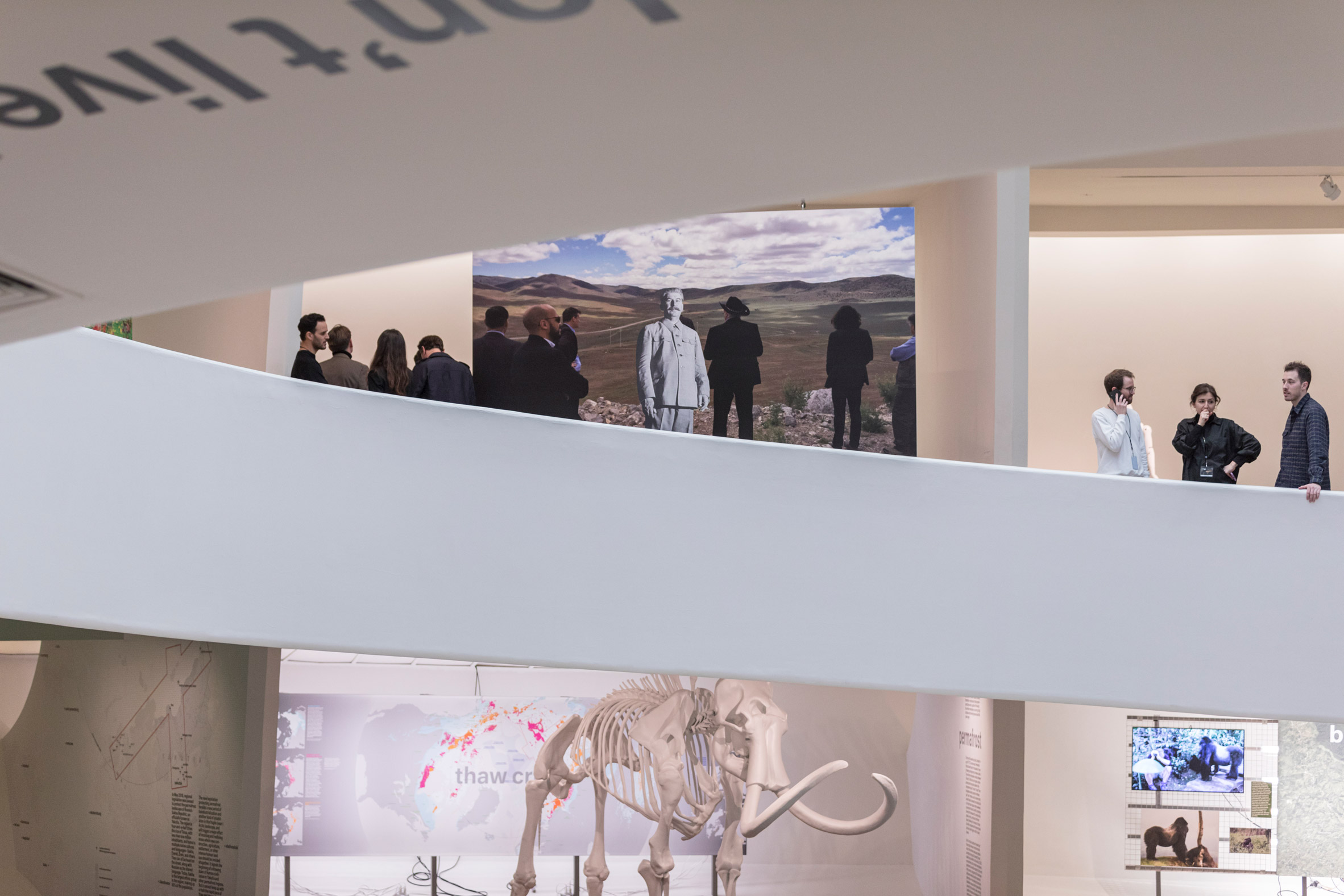 On the fourth level, the focus turns to examples of contemporary ways that the countryside is used in various areas in the world.

China is studied through an example of a high-rise occupied by farmers and the development of rural e-commerce villages known as Taobao. It provides an important example of the ways that the countryside can be used, according to Koolhaas.

“China is the only country that has an official policy on what to do with the countryside,” said Koolhaas. “The state is seriously involved in maintaining the countryside but also creating new possibilities in the countryside.”

Other countries explored include Kenya – which was developed through a partnership with the University of Nairobi – as well as Germany, France, Italy and the US.

The fifth level turns attention to the effects of the climate crisis, which Koolhaas said is much more prevalent than in cities. “Our concentration on cities is itself a handicap in understanding global warming,” added the architect. 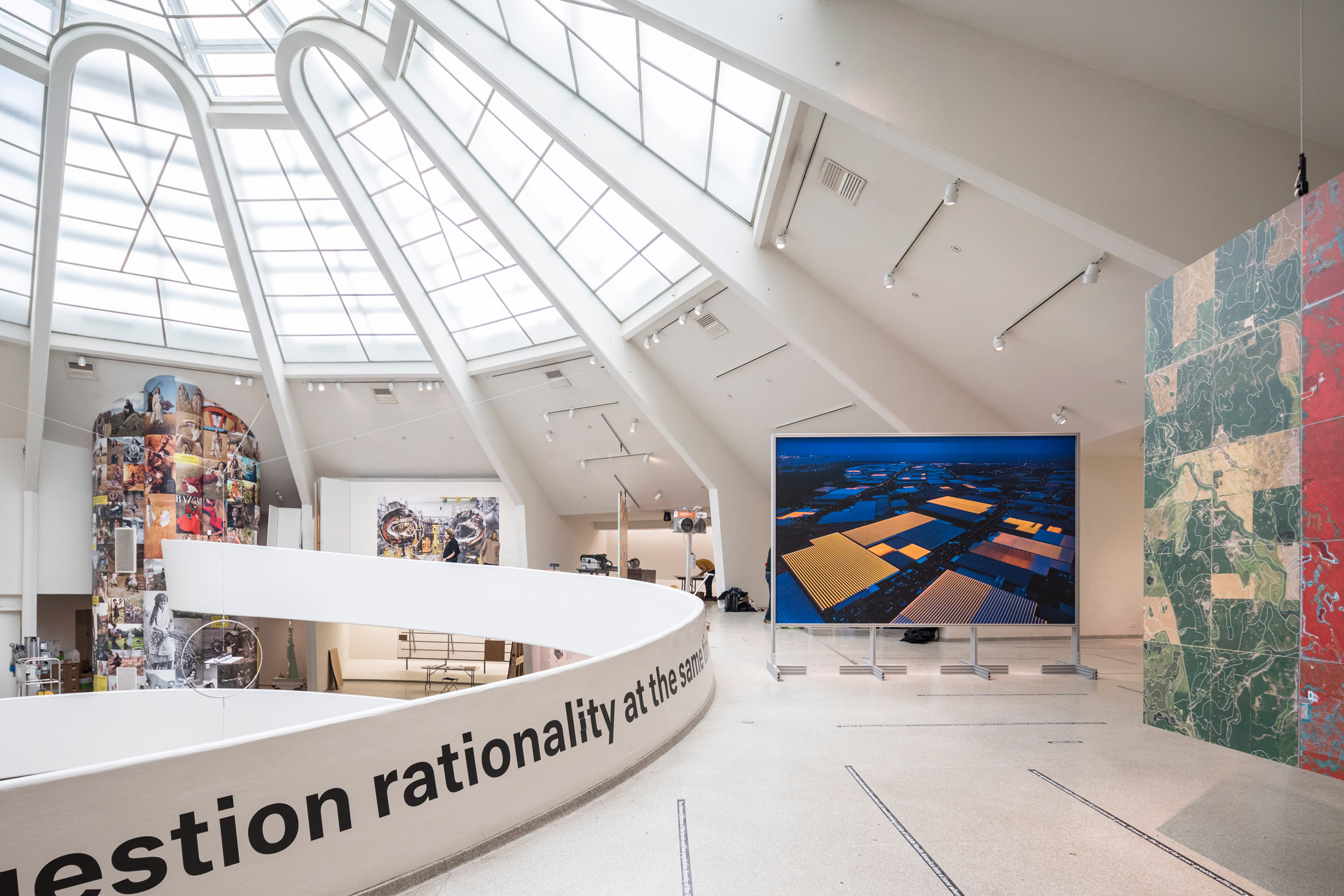 The key feature of this storey are two world maps called Half Earth and Shared Planet. They show the differing ways that greenery could be integrated in the earth in order to meet the carbon reduction targets of the Paris Agreement.

Called Nature/Preservation, this section also comprises studies exploring the current effects on rural areas due to climate change, such as thawing permafrost, and the impact of major preservation efforts to save gorillas.

The final floor, which is laid out to follow Wright’s regular grid, showcases technologies that could be implemented, such as high-tech indoor farming and on-land fish farming. 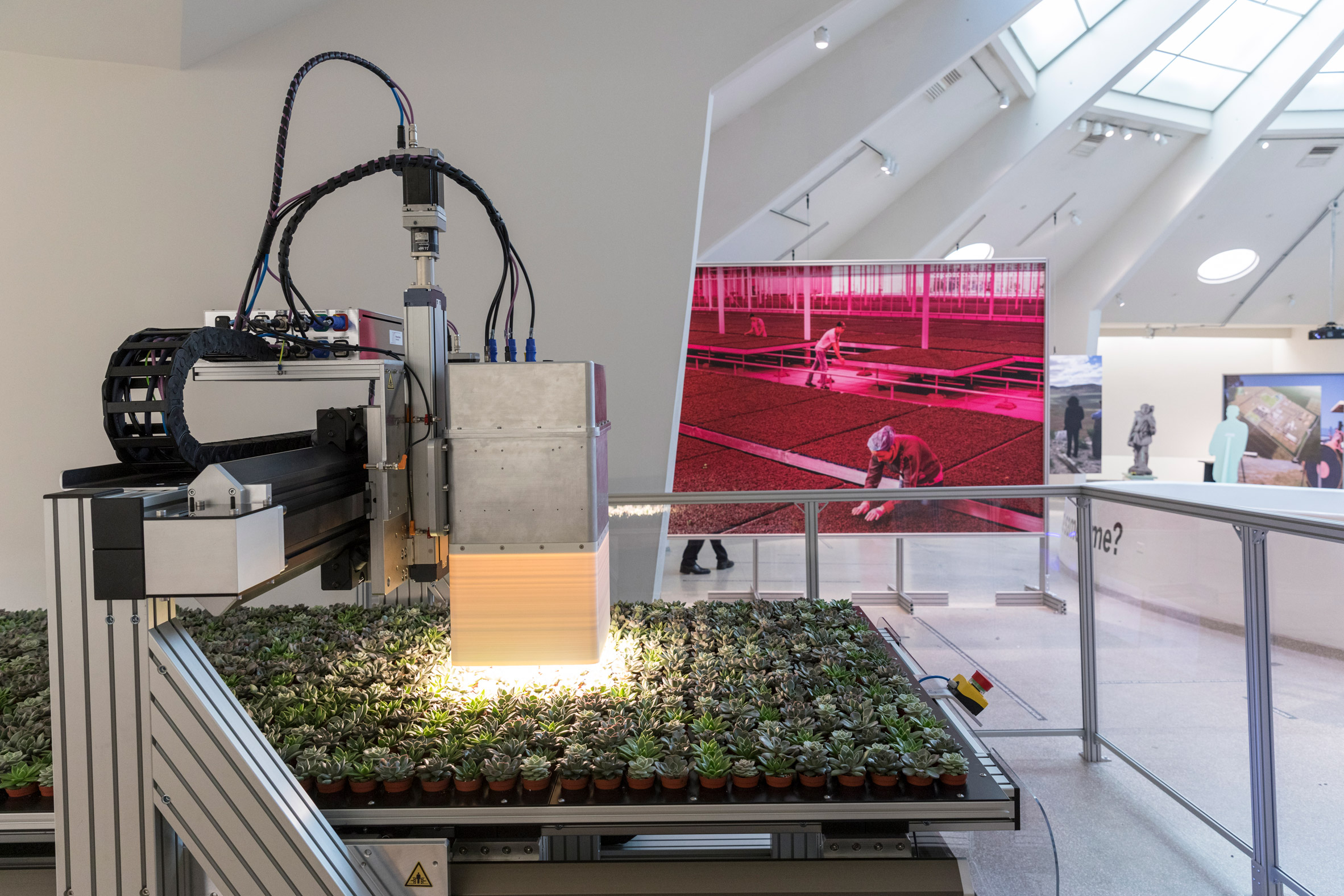 Countryside, The Future opened 20 February and will be on show for six months until the 14 August. Koolhaas said the length of time is intended to give ample opportunity for it to be seen by both locals and tourists alike.

The architect also heads the sister organisation AMO, which conducts research and gathers intelligence that feeds into the firm’s project.  The studio is known for more experimental projects like catwalks for fashion brands Prada and Miu Miu.

Photography is by Laurian Ghinitoiu, courtesy of AMO.

The post Countryside, The Future exhibit has "nothing to do with architecture" says Rem Koolhaas appeared first on Dezeen.