A Japanese-style reading nook and a sculptural wooden staircase feature in this 1970s Los Angeles house, which has been overhauled by local studio Dan Brunn Architecture to “pay homage” to its original architect Frank Gehry.

Gehry was commissioned to design the residence in the 1970s for art collectors Edwin and Ann Janss, but the couple slightly modified the plans during construction and lost some of his signature details. 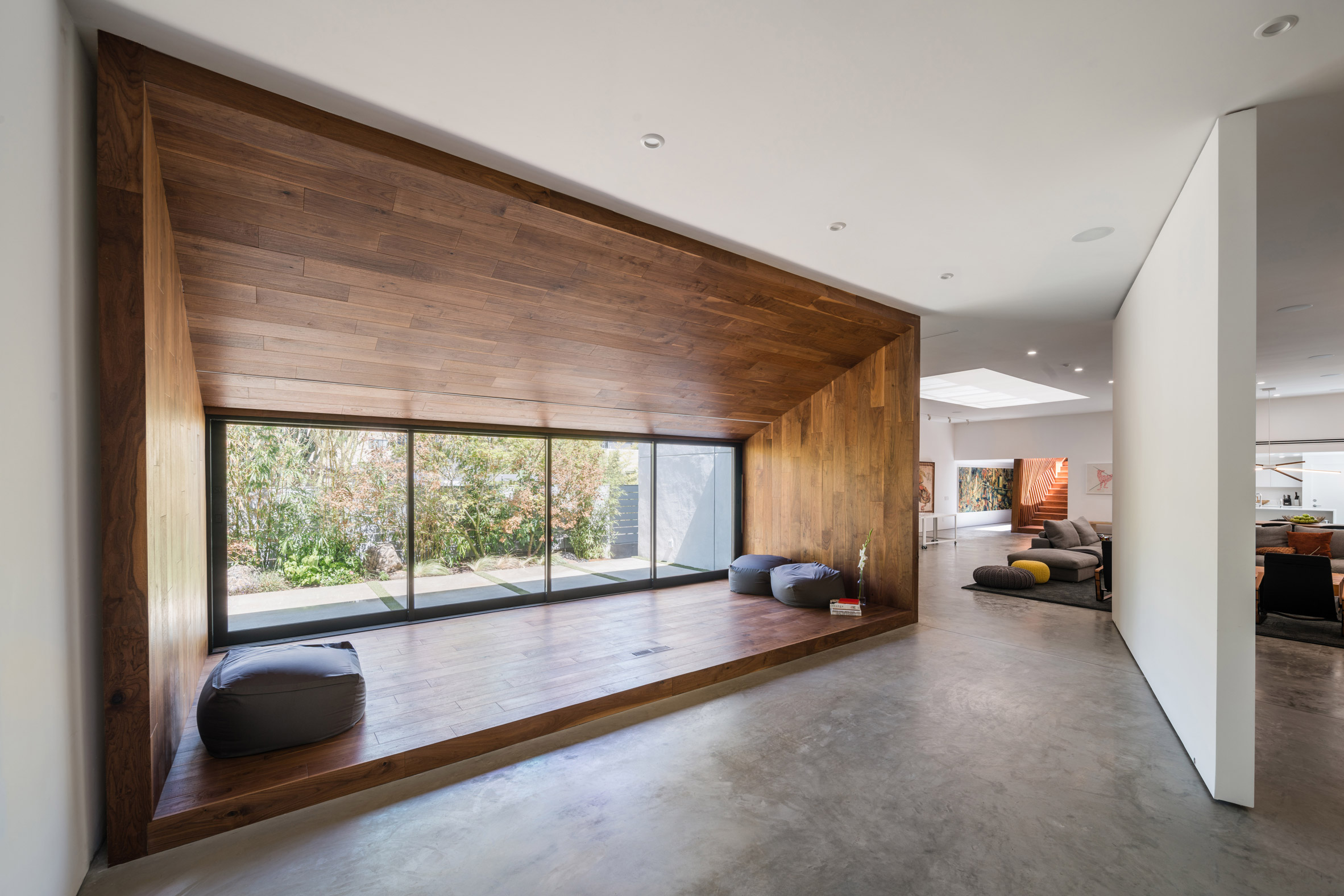 Tasked by illustrator James Jean to renovate the 3,600‐square‐foot (334-square-metre) residence for his family, Dan Brunn Architecture took cues from the work of the Pritzker Prize-winning Canadian-American architect.

Called The Hide Out, the residence is completed in a simple material palette of walnut, concrete and glass inspired by Gehry’s work in the 1970s. 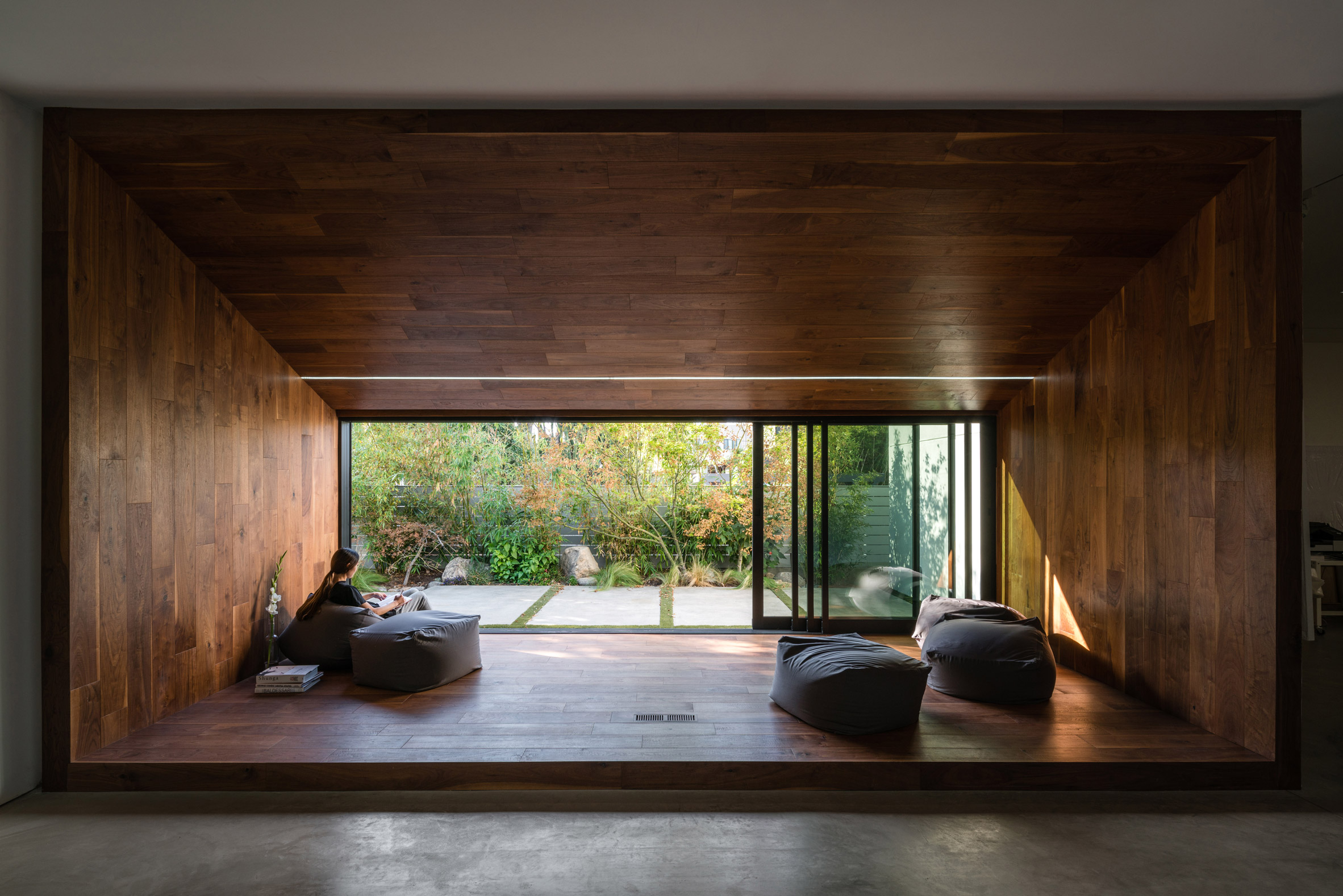 The staircase, which features an angular slatted balustrade shifted in different directions, is intended to reference to his overtly sculptural structures. Examples include the Walt Disney Concert Hall, Guggenheim Museum Bilbao and Fondation Louis Vuitton.

“I took inspiration from current and past Gehry,” studio founder Dan Brunn told Dezeen. “The stair form with its undulating geometry pays homage to works we know Gehry by, such as the Guggenheim or Disney Concert Hall.” 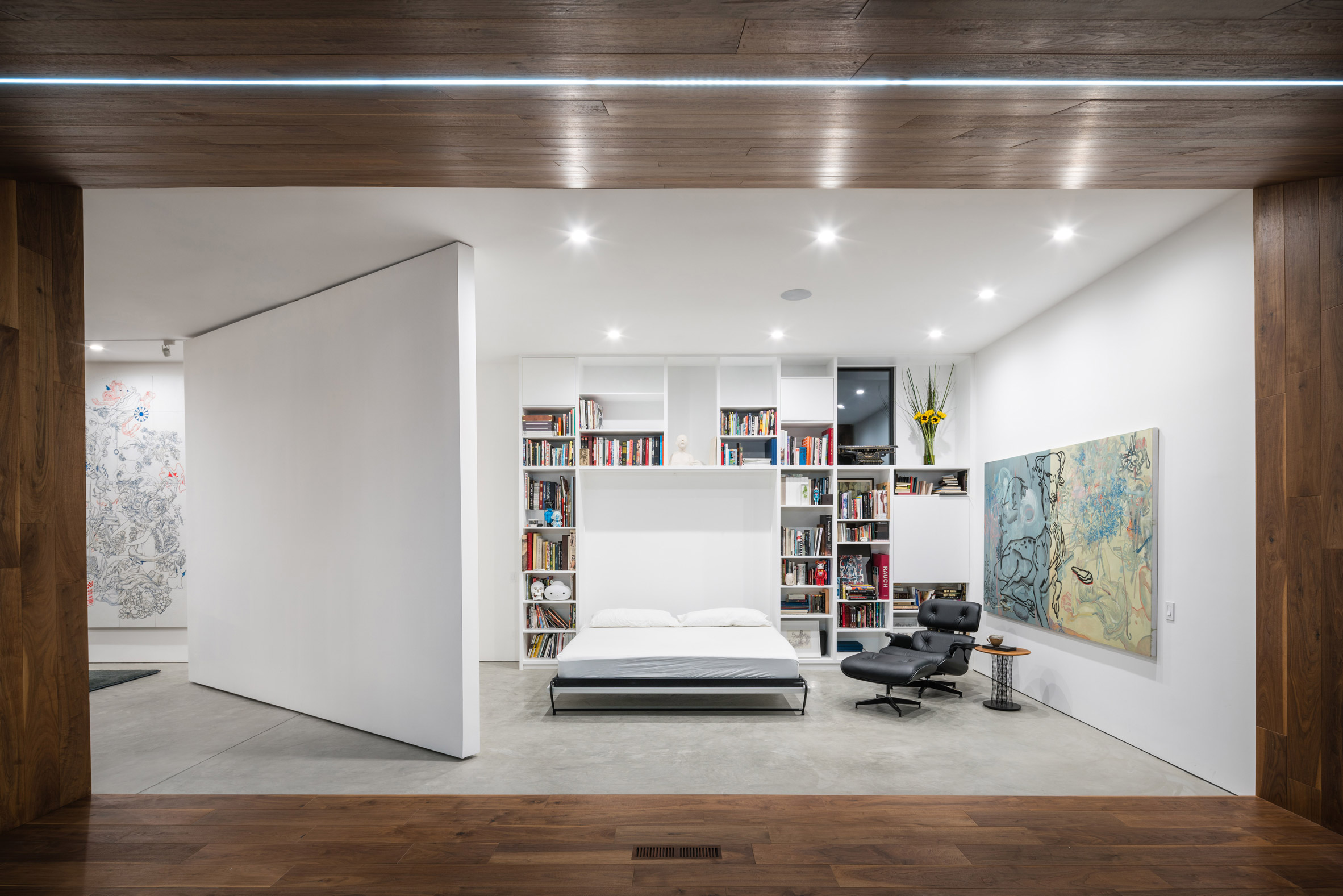 “The construction means and methods reflect more of the handmade nature of where he got his roots,” he continued.

At the top of the stairs on the first floor, Brunn has also created a meditation garden enclosed by glass to realise Gehry’s original intention of creating a greenhouse. 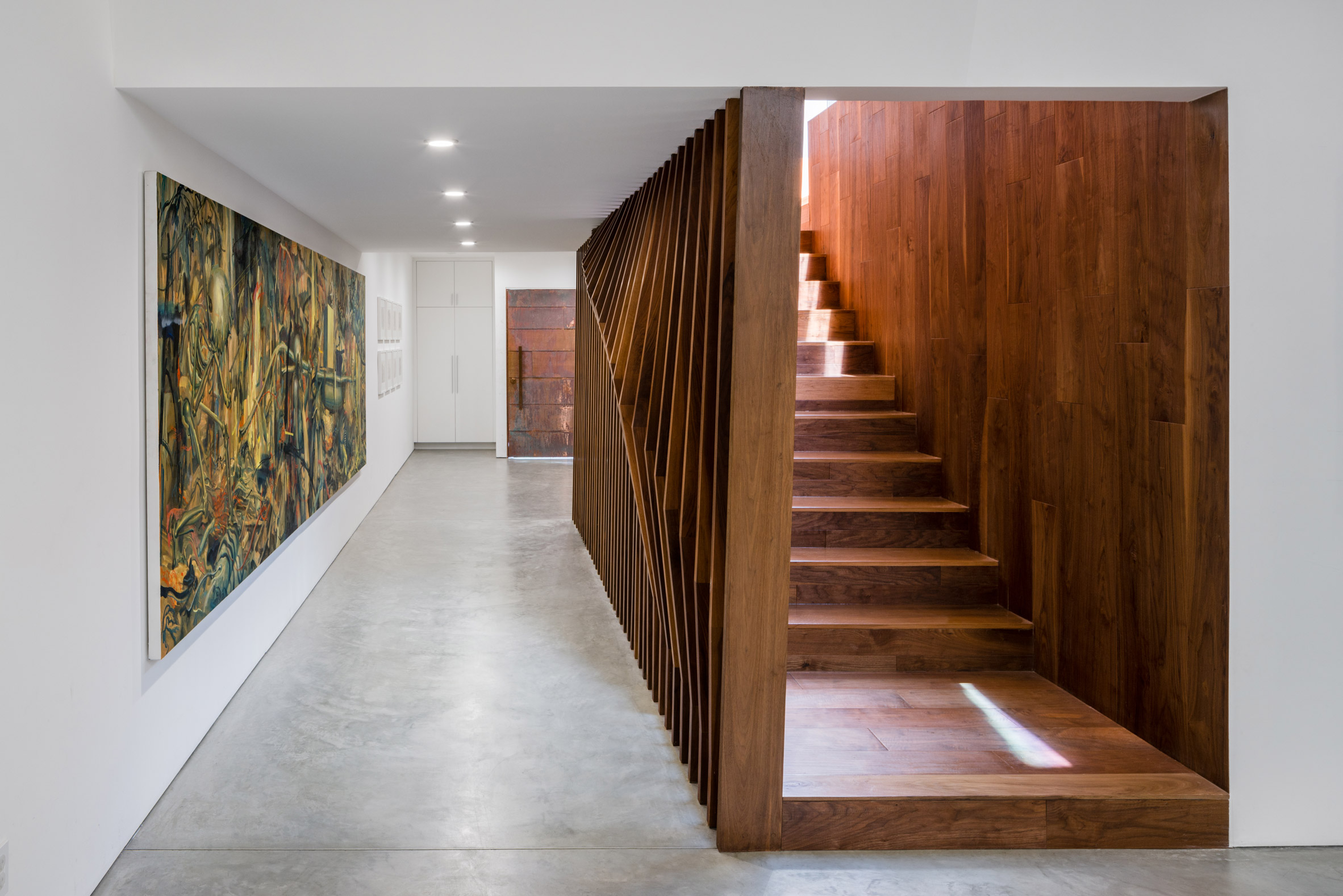 The house is located in Los Angeles’ Sawtelle Japantown, or Little Osaka neighbourhood, known for its Japanese-American cultural and historical significance.

At the back of the ground floor, which Brunn completely stripped back, there is a wooden volume with a sloped roof detailed with a thin strip of light. 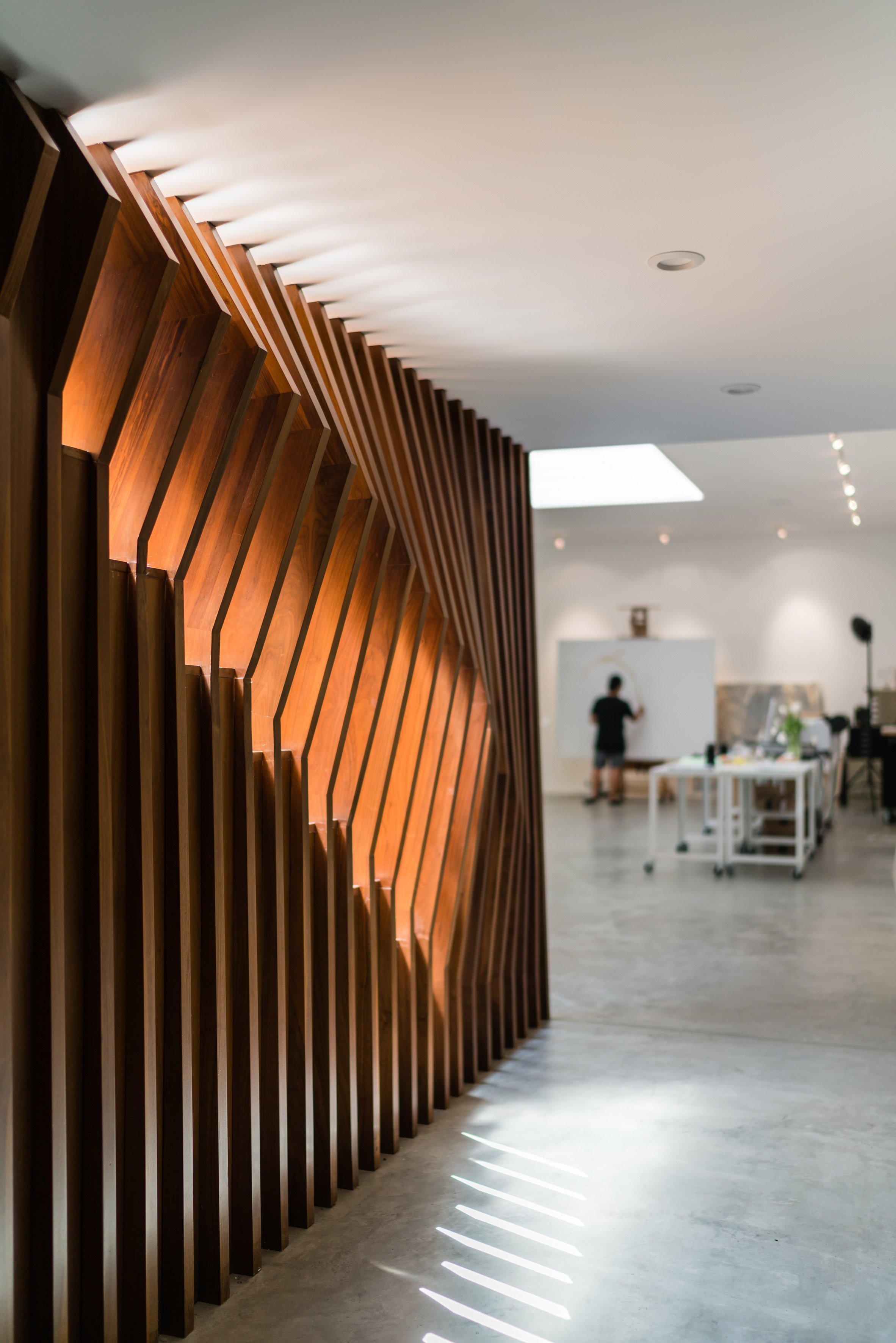 Designed as a reference Japanese tea houses, the volumes offers the resident a place for socialising, meditation and musical performances, and is furnished with grey bean bags.

“It’s inspired by a traditional Japanese tea room and made out of walnut wood, matching the stairs,” Brunn said. 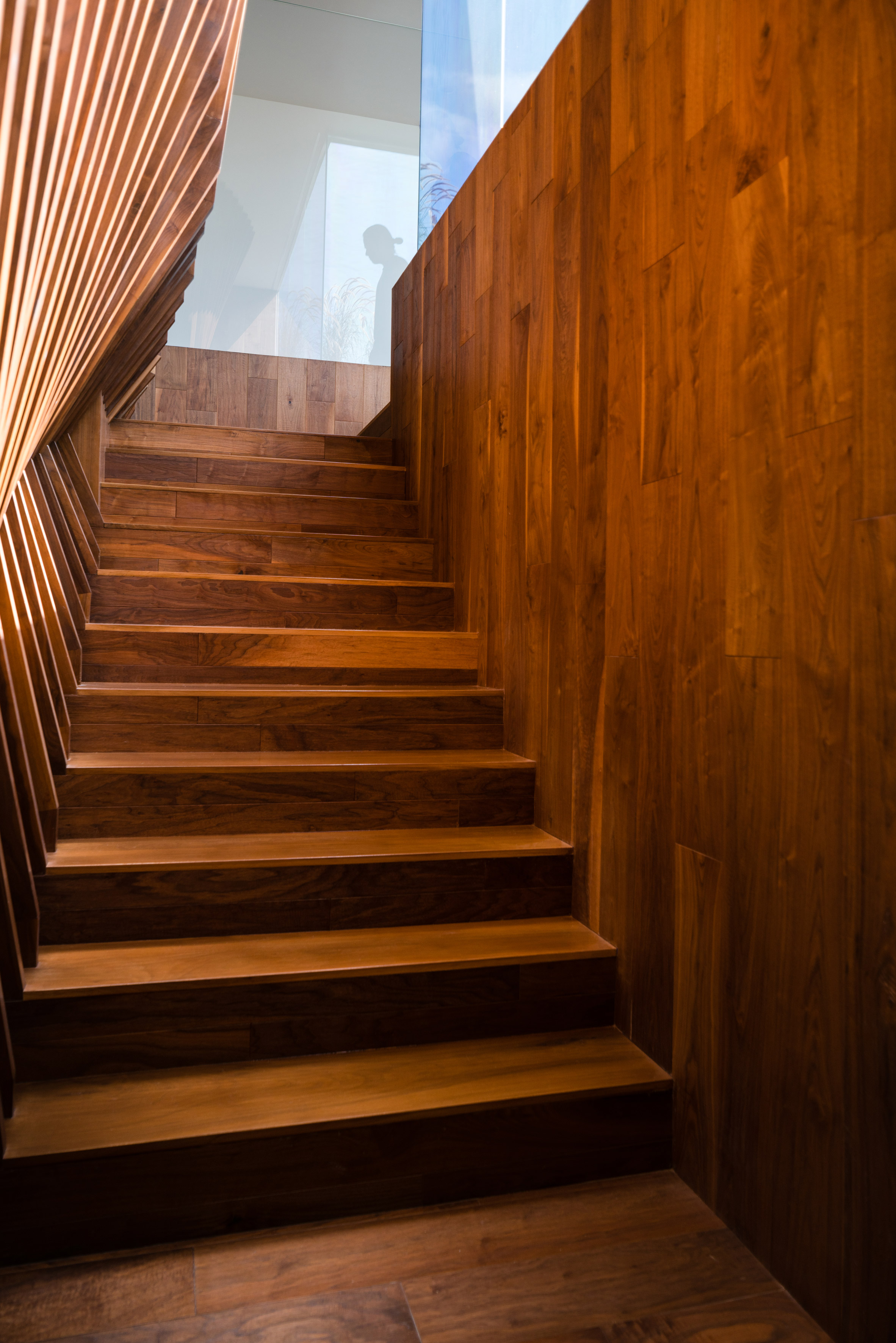 Large, sliding glass doors open onto the garden where Jean’s son can play. It is landscaped with traditional Japanese species of bamboo, gingko, and maple, and features a wall for outdoor painting, a concrete bench with wood slats and a bubbling rock fountain.

This space also incorporates a library, which can be used as a guest bedroom, and can be separated from the rest of the ground floor by a pivoting, white doorway. 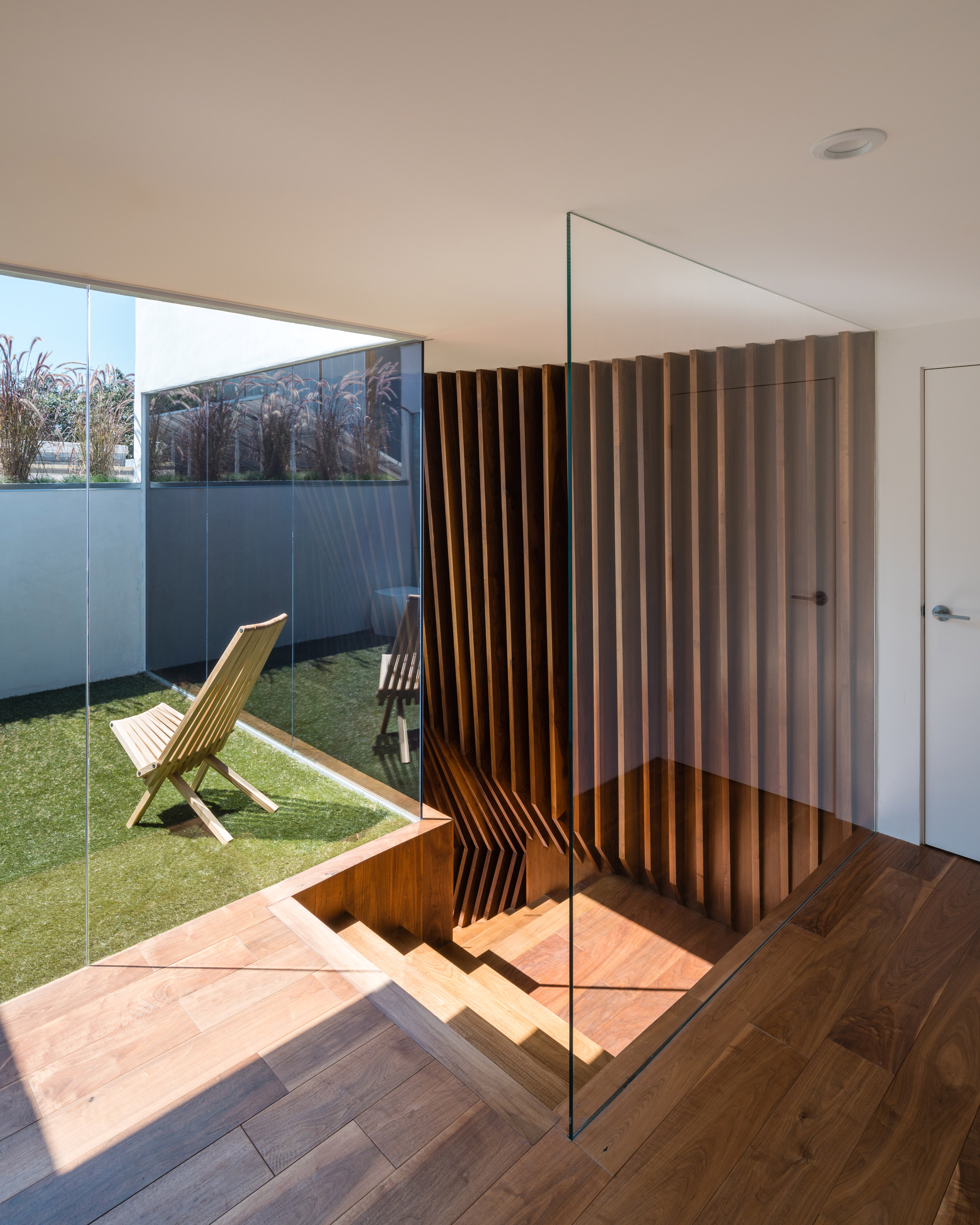 The kitchen, living room, dining room and Jean’s studio are all arranged around an existing large rectangular skylight, the only architectural detail that was executed from Gehry’s original plan.

The skylight is now covered with fabric to create a diffused lighting, along with LEDs. New windows were also created to bring plenty of natural light into the space. 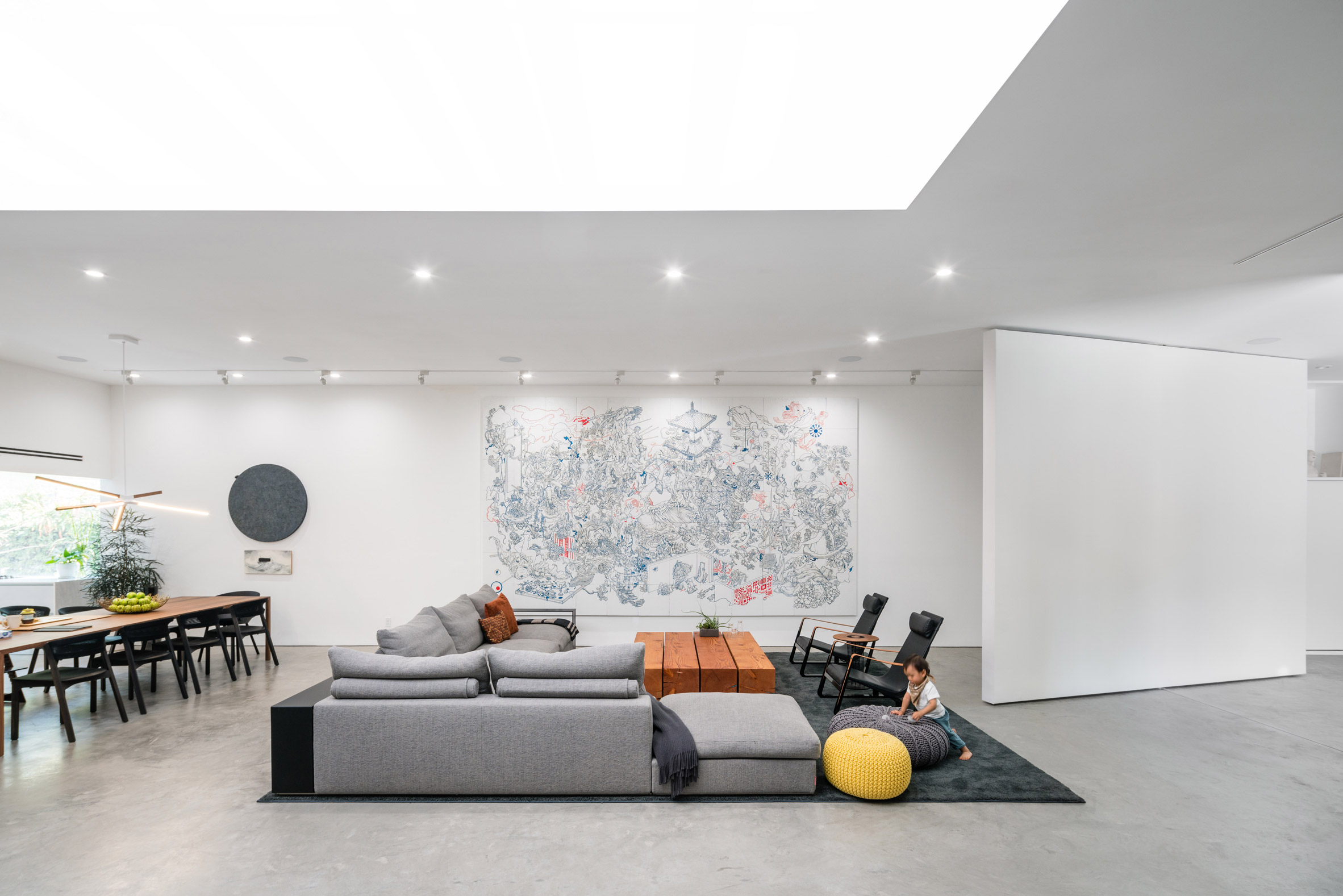 Interiors are kept simple, like a gallery, in order to accommodate changing art displays. They also hark back to when the Janss’ used the home as a contemporary art hub for parties during the 1970s. 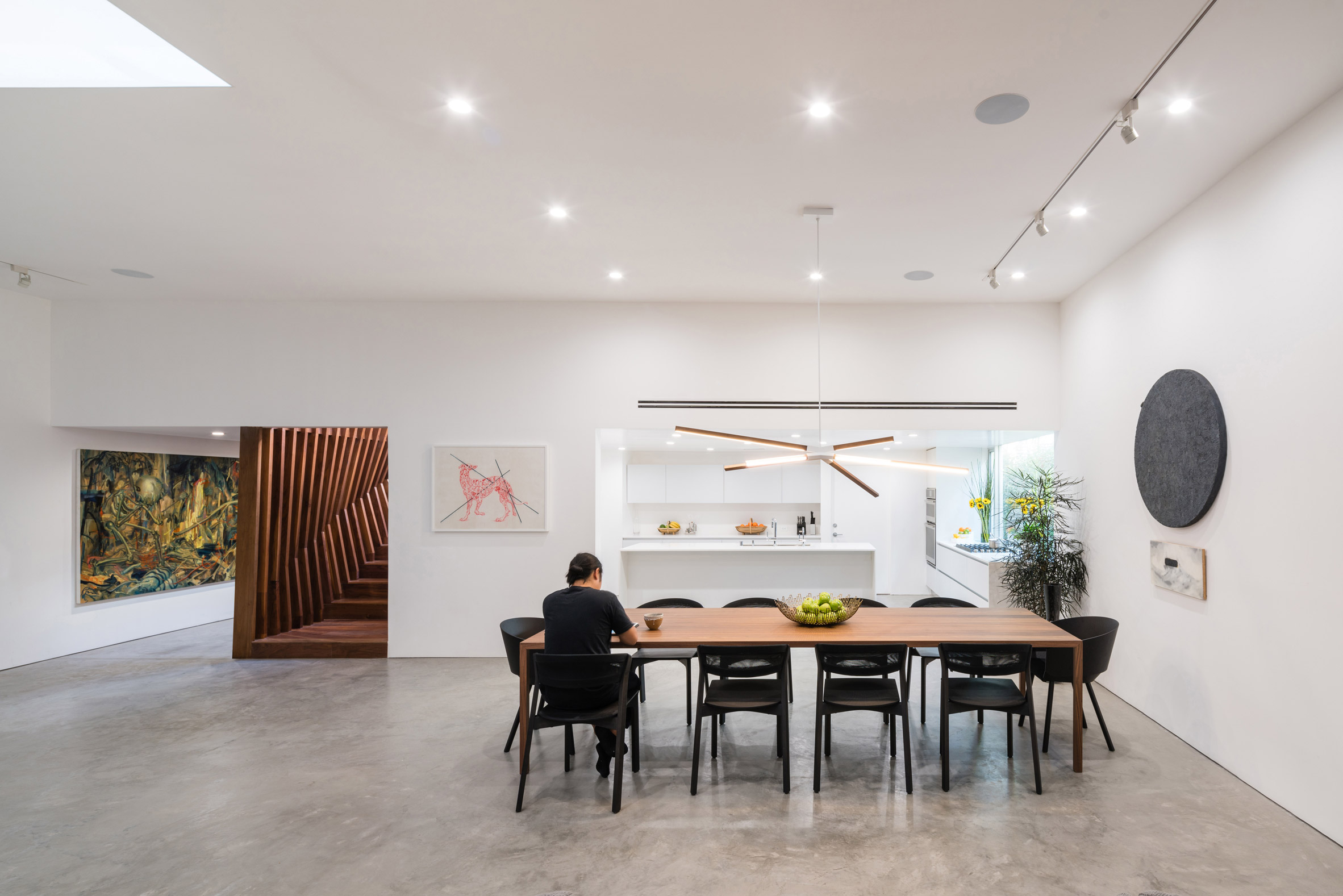 Minimal furnishes, include a charcoal-coloured rug, a sofa with built-in shelving and a pair of black‐and‐tan leather sling chairs that Jean Prouvé designed in 1930.

Gehry ranked at number 34 on Dezeen’s Hot List of the most searched names in architecture and design. 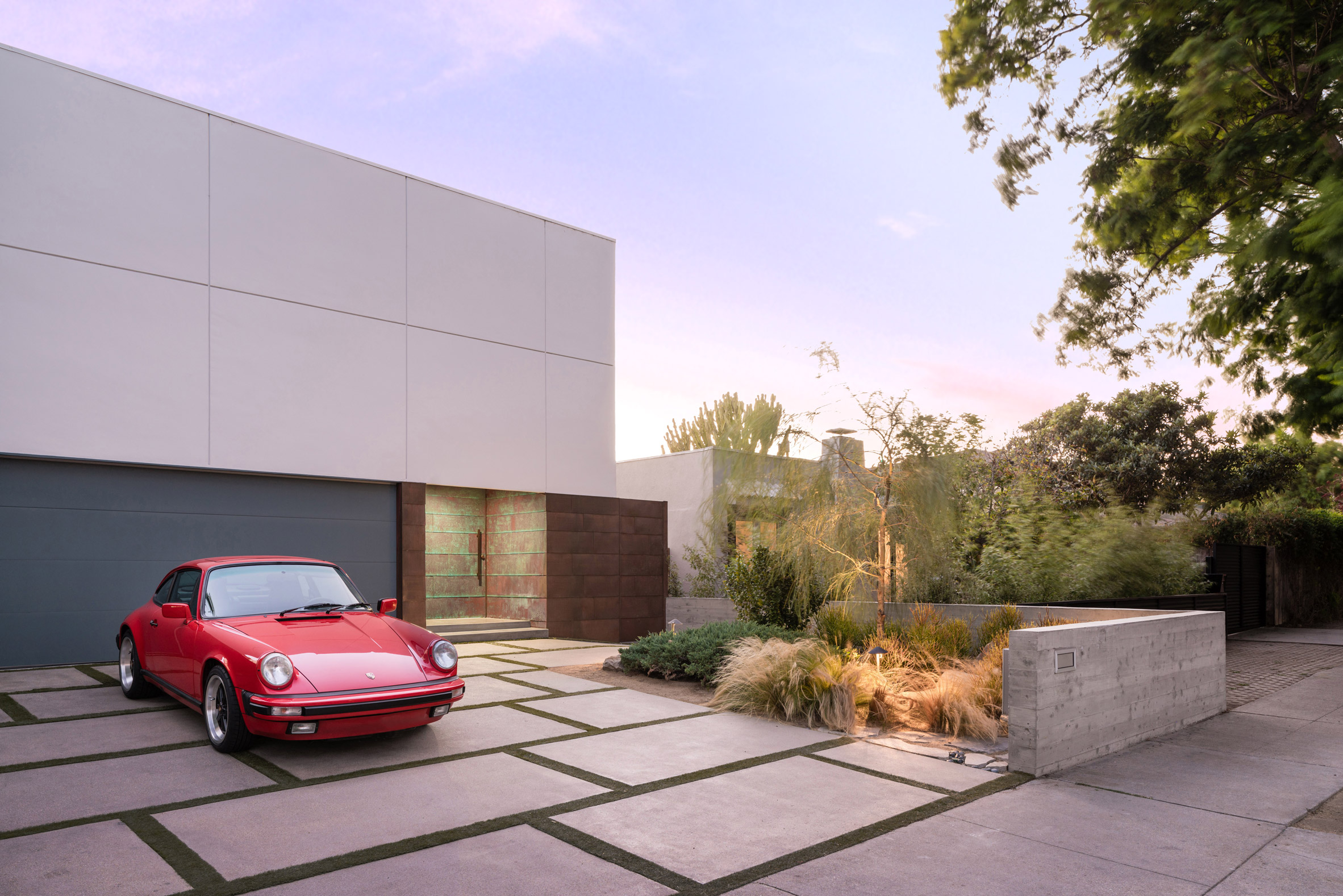 The 88-year-old architect’s recent projects include a masterplan for the revitalisation of the Los Angeles River, which was fiercely criticised by a local landscape architect, and a huge development along LA’s famous Sunset Strip.

Earlier this year, he said he could easily swap his signature style for designs more akin to 20th-century modernism in the future. 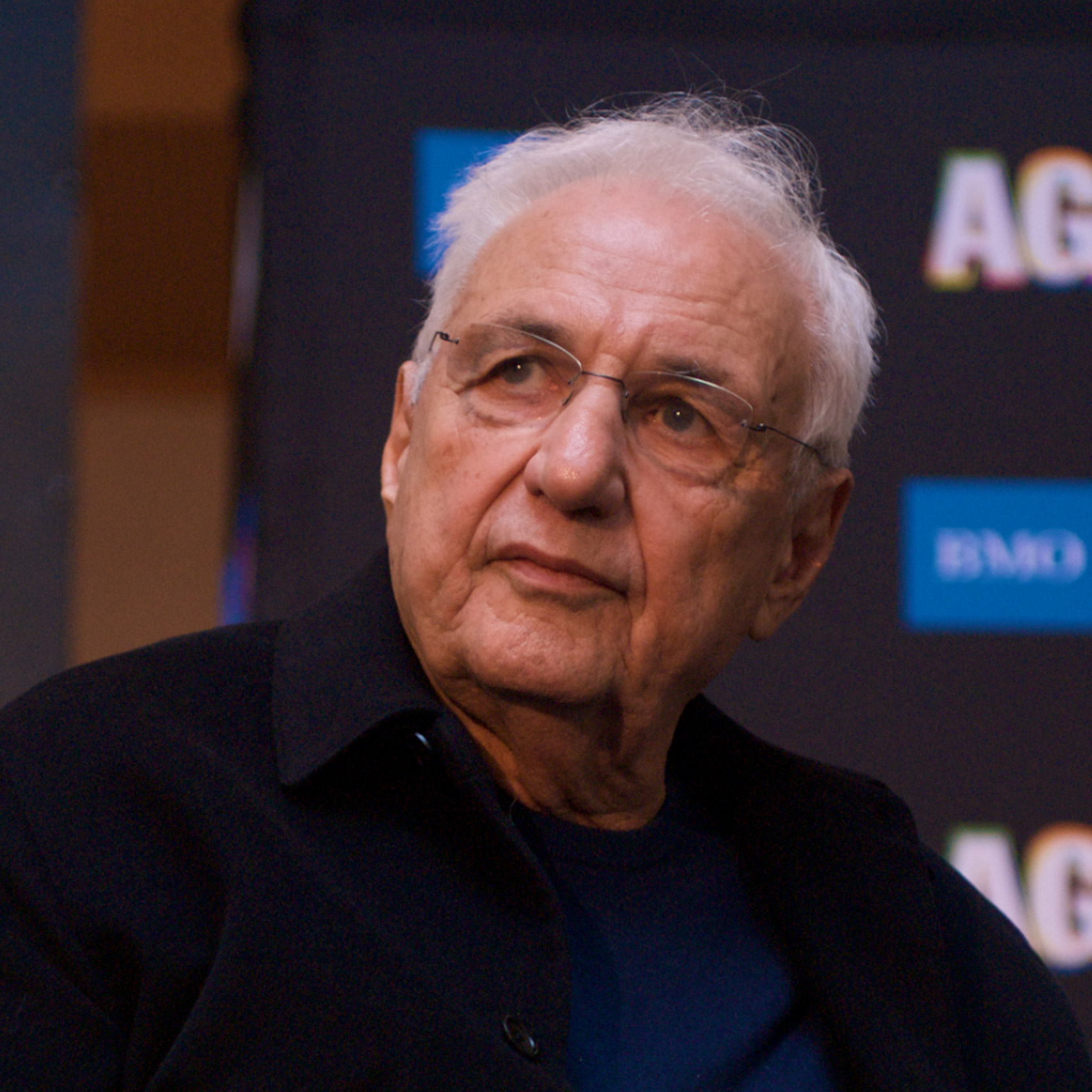 Photography is by Brandon Shigeta.