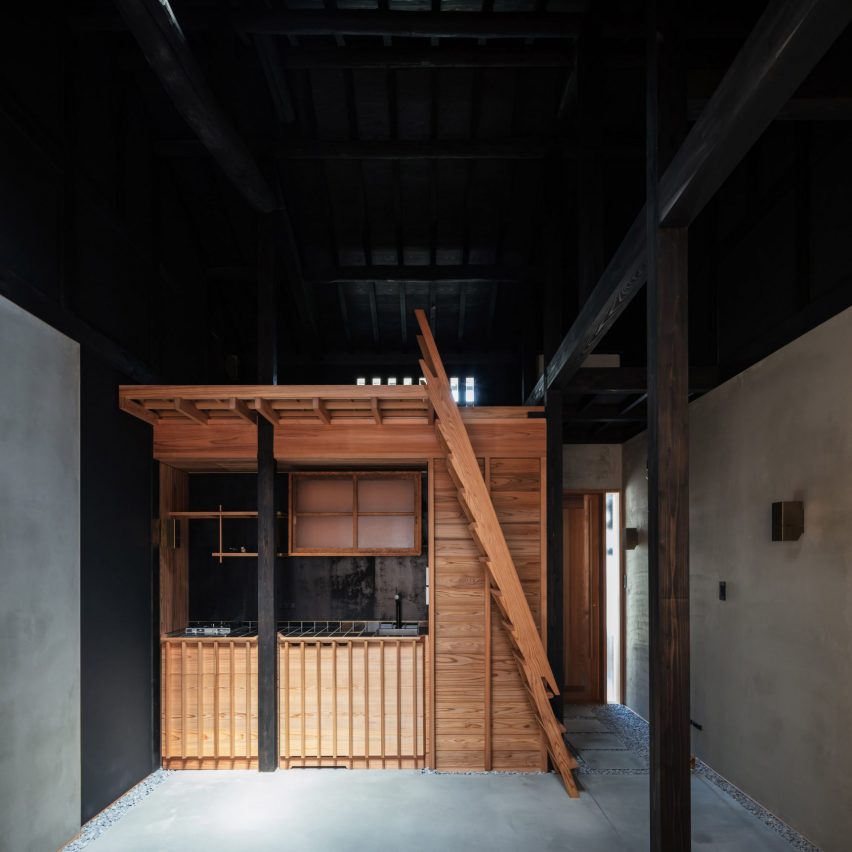 Named Terrace House near Demachiyanagi, the home has a historic facade that Atelier Luke restored while bringing contemporary Japanese and Australian design sensibilities into the interior.

The studio started the project by stripping the house back to its structure, revealing previously hidden roof beams that they chose to make into a feature.

Perhaps counterintuitively, they did so by staining the timber of the upper storey and ceiling black.

“Spaciousness is created within this small home through darkness as well as light,” said Atelier Luke.

“Internally the black-stained timber skeleton, including previously concealed roof beams, creates a spacious void of shadows within which the new home is formed,” it continued.

“Shadows extend almost infinitely above whilst the ground plane extends into the street, blurring the bounds of the small plot.”

Within this structure, the studio inserted two prominent cedar boxes, “almost as furniture”. The front box contains the bathroom and the kitchen with an elevated sleeping loft above.

The rear box functions to provide a connection to the outdoors, with layered screens and doors that allow the interior to be opened to the public street beyond, or closed around a small internal garden.

Internally, much of the structure had to be replaced or altered to comply with contemporary fire and earthquake safety requirements.

Atelier Luke used the same Yoshino cedar from the managed forests of nearby Nara throughout, including on the structure, joinery, cabinetry, linings and external cladding.

While the timber of the roof is stained black, on the ground level it has a natural finish of linseed oil.

Externally, Terrace House near Demachiyanagi’s front facade was the focus for restoration work in collaboration with local craftspeople. They restored elements such as the “mushikomado” plaster lattice window on the second floor using traditional techniques.

The rear facade is clearly contemporary, with a black steel perimeter frame that provides a material contrast to the timber screens.

Atelier Luke believes that the project stands out against other homes in the area because of its respectful approach to the past.

“The quality of real trades and materials is evident when contrasted with the palette of prefabricated and plasticised finishes that dominate this typical Japanese suburb,” said the studio.

“The diminutive scale and fine permeability almost present the home as a historical artefact within the street, demonstrating an alternative to the towering and impregnable neighbours.”

Atelier Luke is led by Australian architect Luke Hayward and Japanese interior designer Junko Nakatsuka, who founded the studio in 2013.

Many architects in high-density Japanese cities have had to work with the constrictions of narrow houses, such as Apollo Architects & Associates’ recent 1.4-metre-wide Jewel house.

Photography is by Yohei Sasakura.