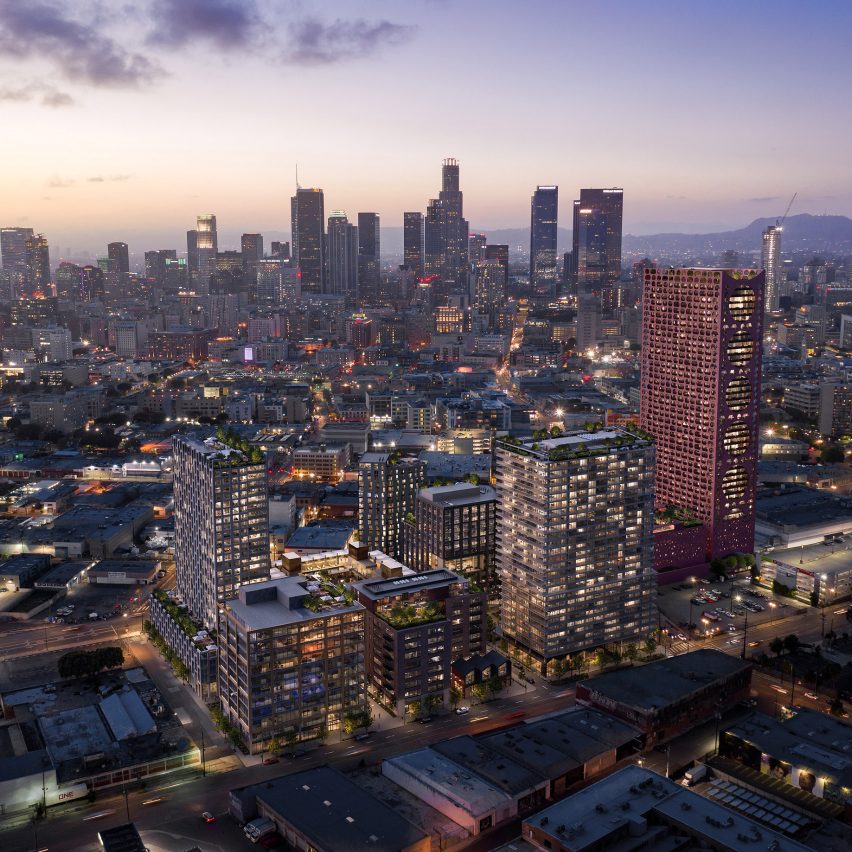 British-Ghanaian architect David Adjaye has designed two buildings for the upcoming Fourth and Central mixed-use development in Los Angeles, which is being master-planned by Studio One Eleven.

The project, which has been submitted for a development application, would see ten buildings built on a 7.6-acre site in downtown Los Angeles between Fourth Street and Central Avenue.

If approved, construction would begin in 2024.

Fourth and Central is being developed by Denver-based Continuum Partners and Los Angeles Cold Storage – a frozen food warehouse company that has owned the site for almost half a century.

Los Angeles-based architecture office Studio One Eleven has designed a mixed-use development for the site that would range in height from two to 42 storeys.

Adjaye designed two buildings for the project. The founder of Adjaye Associates has previously designed a pink concrete shop for fashion retailer The Webster in Los Angeles, but this would be his first ground-up project in the city.

“Working with David Adjaye and his team, we’ve designed an open, street-level plan that incrementally connects with the neighbourhood, providing diverse buildings, a rich mix of uses, and abundant green space – all human-scaled and accessible,” said Studio One Eleven founder Alan Pullman.

Studio One Eleven plans to make the development walkable and cycle-friendly.

“Fourth and Central provides an unmatched opportunity to leverage major transit improvements in a way that responsibly uplifts the community with increased housing and commercial opportunities,” he added.

Continuum Partners also said it intended to make sure the residential units would be priced for a range of incomes, in response to the city’s escalating homelessness crisis fuelled by high rents and lack of affordable homes.

“We’re encouraged that community-minded developers like Continuum Partners are looking to invest in responsible development that creates living wage jobs and housing opportunities for a mixture of income levels, said Weingart Center CEO Kevin Murray. The Weingart Center is a non-profit that provides services for homeless people in Los Angeles.

In response to the crisis, Leher Architects has been working with the City on a trio of village-style sites filled with cabin-style prefabricated shelters and amenities for homeless people in Los Angeles.

Images courtesy of Studio One Eleven and Adjaye Associates.

The post David Adjaye and Studio One Eleven reveal Fourth and Central development in LA appeared first on Dezeen.