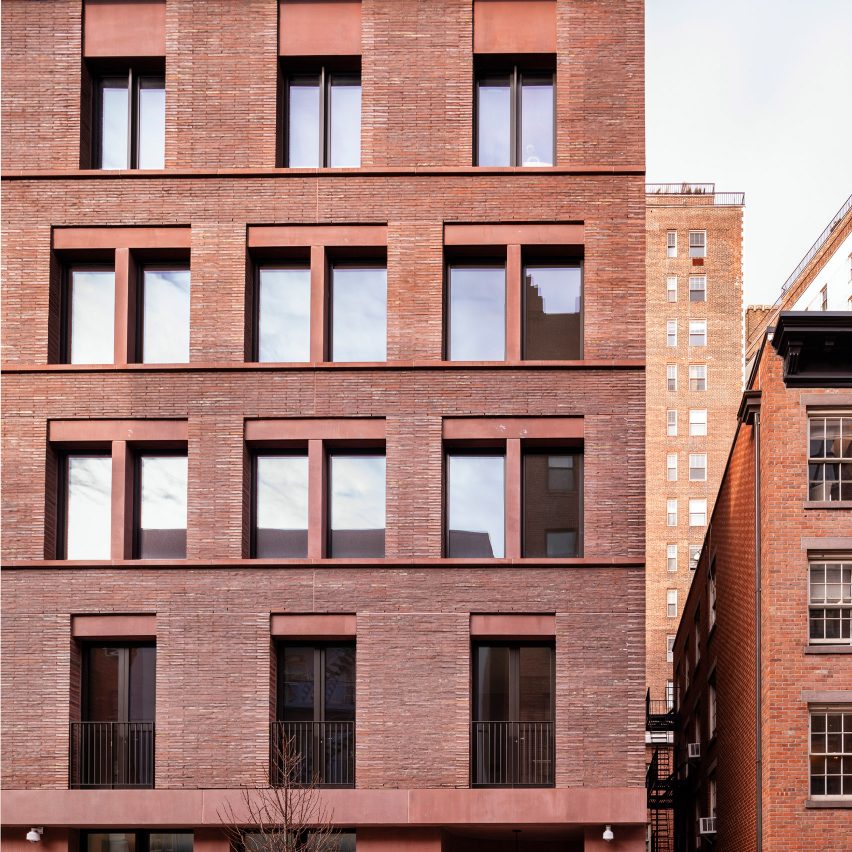 The new six-storey building, which replaces a parking garage that dated from the 1920s, is located in the city’s Greenwich Village neighbourhood.

To complement the mix of 19th and 20th-century buildings that bracket it, David Chipperfield Architects designed a twist on traditional townhouse facades for 11-19 Jane Street.

At ground level, the block is given a bold and contemporary feel with a wall of red-pigmented concrete. The same red concrete appears on lintels and mullions on the upper levels.

The modern concrete is tempered by the more traditional Roman bricks that clad the upper floors. These long, narrow bricks create texture and bands of striated colour across the building’s face.

At ground level, recessed entrances at both ends lead to the duplex townhouses that occupy the lower floors. A central opening provides access to the other apartments and the basement parking garage.

Different window and door styles denote the mix of apartment types within the block. The two-storey townhouses have balconied French windows, while the lateral apartments above have broader windows defined by the red concrete mullions.

A red concrete penthouse occupies the top floor, slightly set back from the street, with large windows overlooking a garden.

Balcony and door railings are made from dark bronze, to complement the ruddy exterior materials. Inside, the communal areas have floors made of terrazzo.

Belgian landscape architect Peter Wirtz designed both the roof terrace and a garden space behind the apartment block.

David Chipperfield founded his architecture practice in 1985. Recent projects in New York City by his firm include the Rolex headquarters on the corner of 5th Avenue and a residential tower in midtown Manhattan called The Byrant.

Photography is by James Ewing / JBSA.