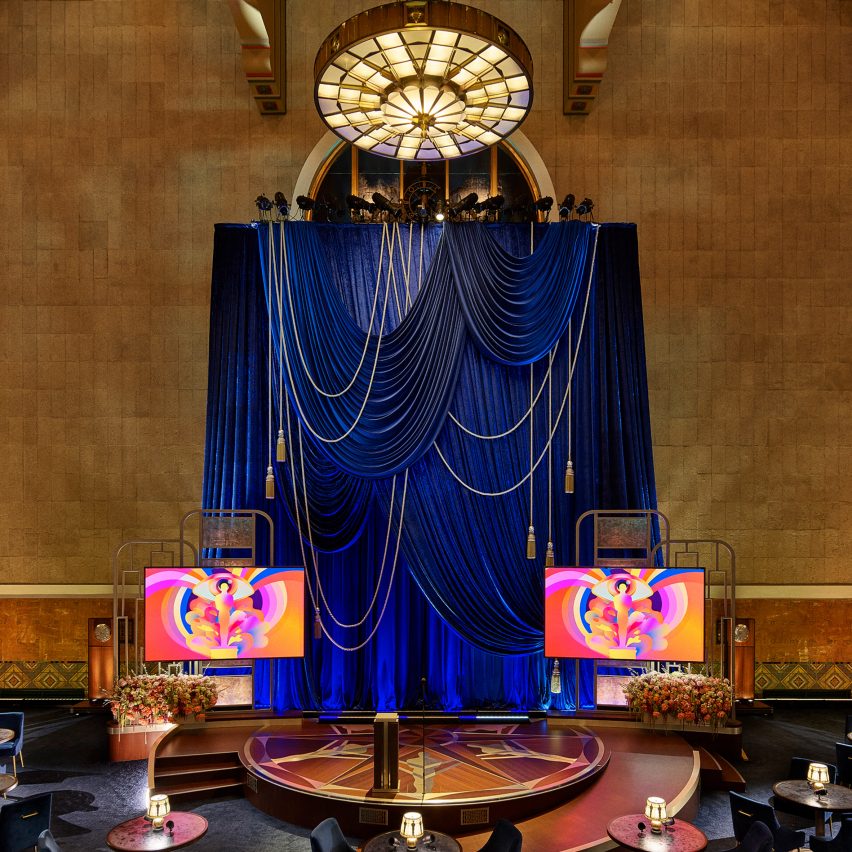 Rockwell transformed Union Station’s main ticket hall into the venue for the 91st Academy Awards main ceremony, which was delayed by two months due to the coronavirus pandemic.

The architect, who also created the sets for the Oscars’ 81st and 82nd events, based his design on the idea of creating an intimate supper club for nominees and their guests.

Referencing old Hollywood glamour, the set was informed by early Oscars ceremonies including the first event which was a private dinner held at Los Angeles’ Hollywood Roosevelt Hotel in 1929.

“The Oscars ceremony is always intimate and grand at the same time, more so this year with Union Station’s soaring and historic details,” said Rockwell.

Custom tables and chairs were installed in the ticket hall to create a curved multi-layered seating area facing a circular wooden thrust stage.

The spaced-out seating was designed so that attendees could remain in small groups in order to minimise unnecessary mixing in line with social distancing measures. Many presenters also spoke from their respective tables.

On the lower tiers, intimate wooden banquettes and individual chairs were lined with plush blue velvet and finished with elegant silver rails. Each table featured a small lamp decorated with gold Oscars statuettes.

Oversized draped curtains matching the seating’s upholstery defined the stage’s backdrop, which was flanked by a pair of geometric screens that showed the event.

Around the space, a scattering of similar screens served as digital picture frames displaying retro black and white photographs from past Oscars nights, which switched to live footage of the stage during the ceremony.

“We conceived a room within a room that made circulation intuitive, enveloped the audience in an intimate embrace and created a space in which the action happens everywhere, not just on stage,” explained Rockwell.

Alongside the main venue, Union Station’s north patio was turned into an outdoor seating area with teak, multi-layered decking.

Open to attendees throughout the ceremony, monitors were placed at regular intervals across the patio in order to live stream the events happening inside.

David Rockwell is an American architect and designer who founded architecture practice The Rockwell Group in 1984.

The firm recently unveiled a kit of parts designed to turn New York City’s streets into socially distanced outdoor restaurants, as well as an elevated wooden walkway that connects various amenities within a residents-only leisure club in Manhattan.

Photography is by Spencer Lowell unless stated.