Architecture studio DCPP has slotted huge windows between the concrete walls of this long, low house in Mexico to offer residents views of a golf course and mountains. 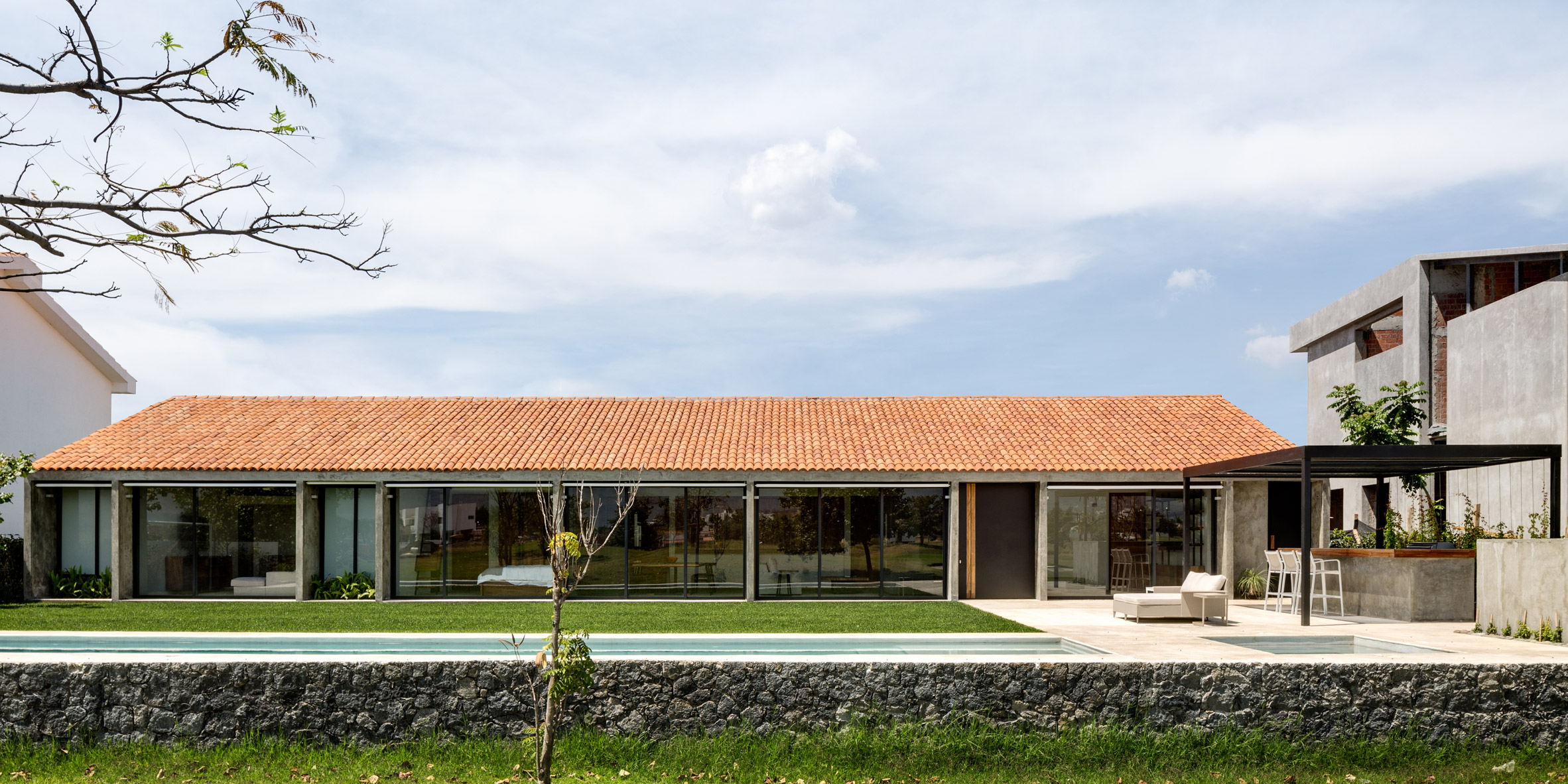 Casa Paraíso is located near the Cuernavaca – the capital city of Mexican state Morelos – at the Paraíso Country Club, providing a city lawyer with a weekend retreat.

Mexico City-based DCPP designed the 350-square-metre, one-storey residence with a rectangular plan. Large expanses of glazing run along both the street-facing and rear facades, giving expansive views of the country club’s golf course and the mountains beyond. 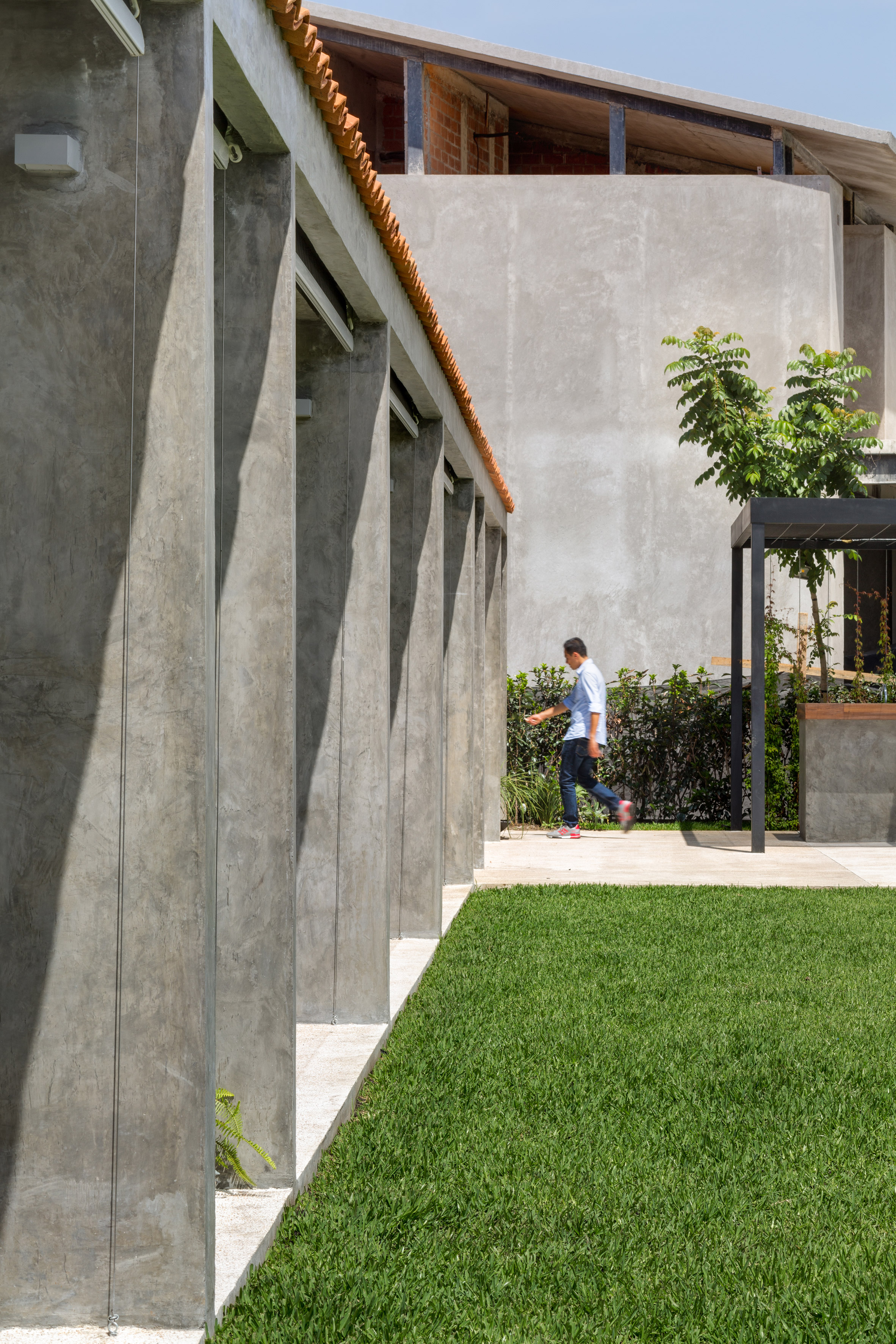 Native vegetation planted in front of the residence on the south-facing side is intended to grow over the windows, and hide the house and its tiled roof from street views. 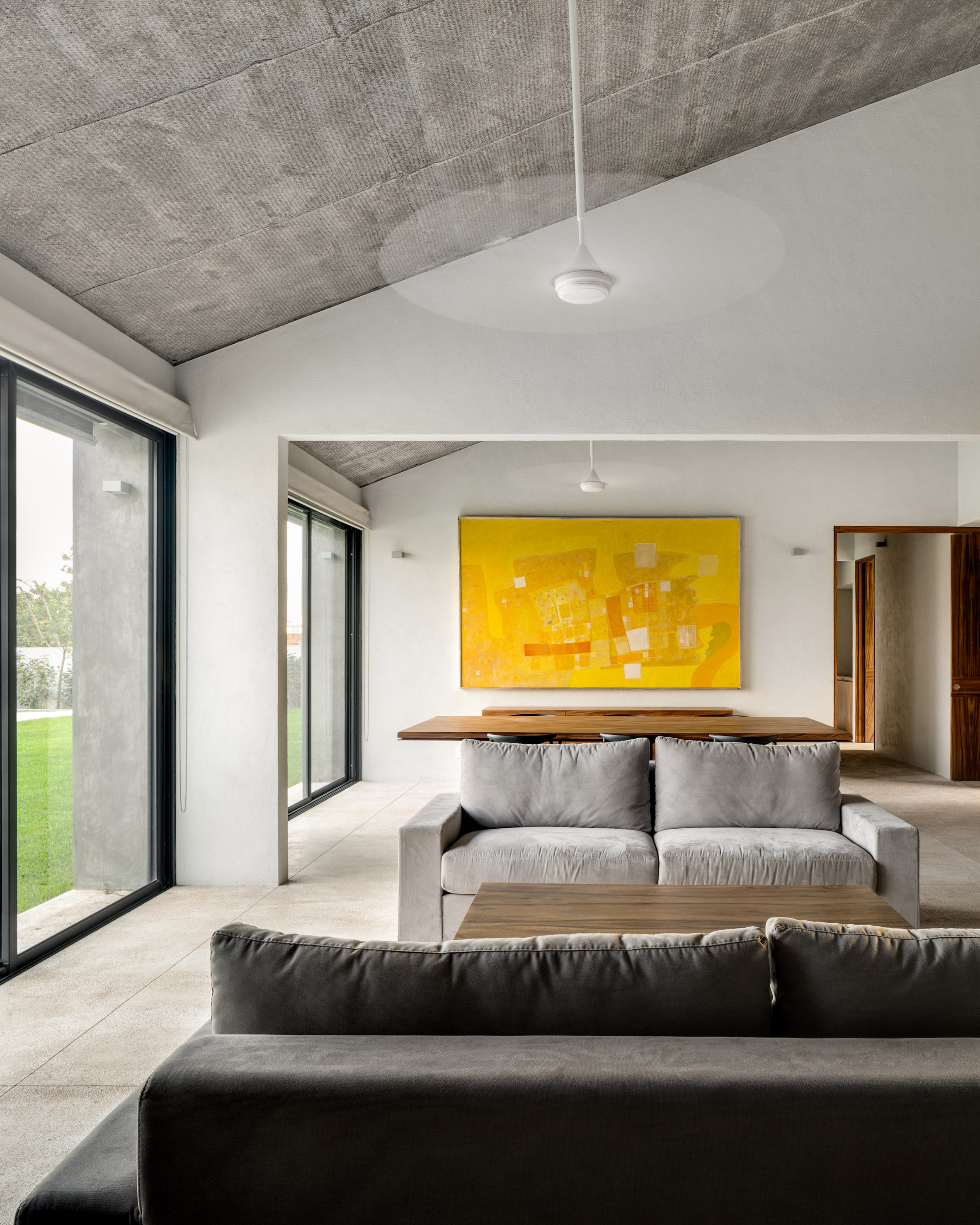 “We aimed to design a house that felt that it wasn’t there at all,” architect Jorge Quiroga Fuentes told Dezeen, “[that is] so open to the site on both ends that just walls and a single concrete slab could be recognisable between the planted vegetation and trees native of the region, with the intention that in time nature would gain ground on the project.” 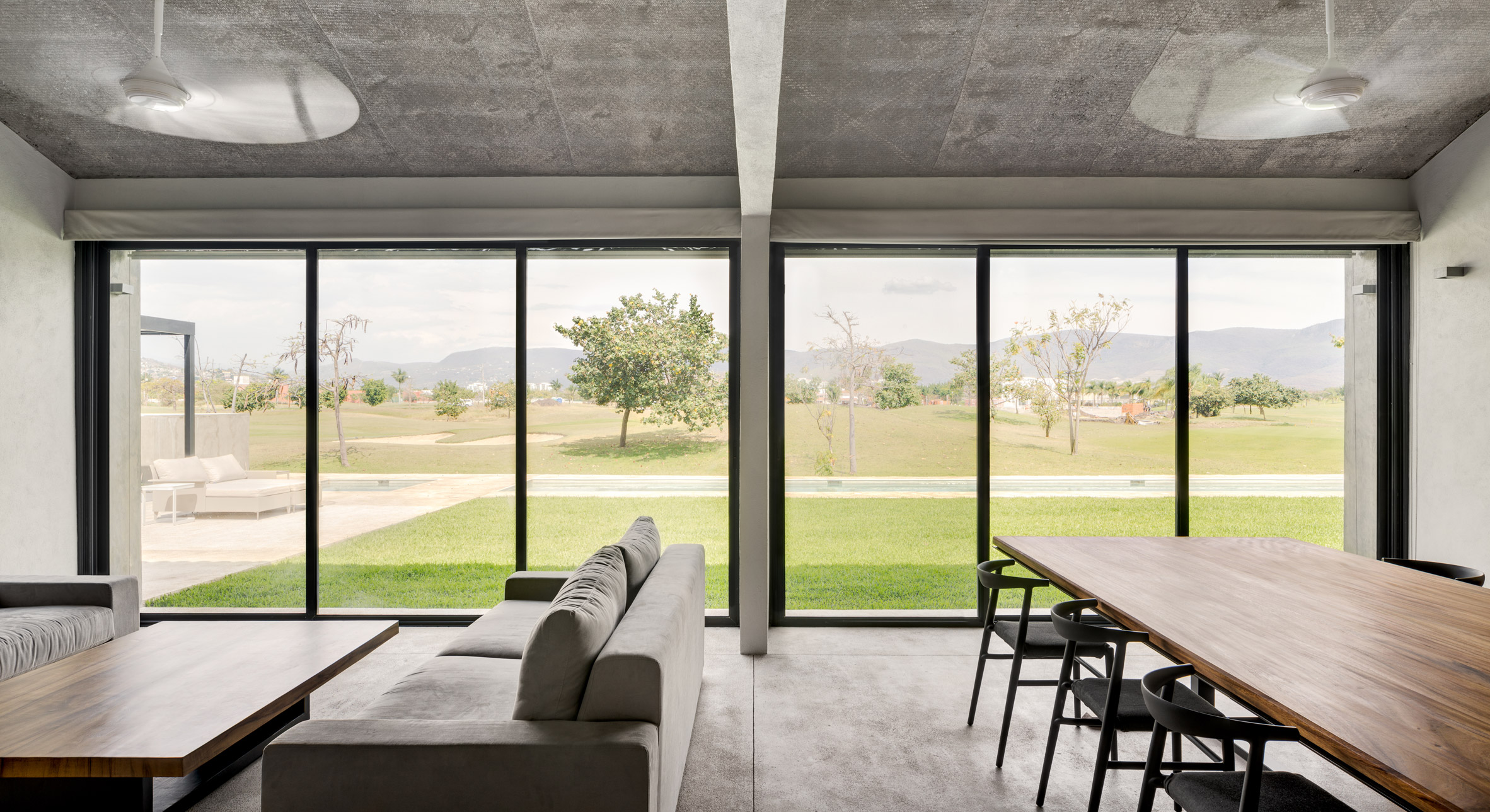 Windows at the rear were also created at the resident’s request to have a strong connection to the outdoor areas, including a swimming pool and a grassy patch for playing football.

A patio wrapping the corner of the pool provides a sunbathing deck and features a jacuzzi, while a black pergola provides shade to a concrete bar and a barbecue area. 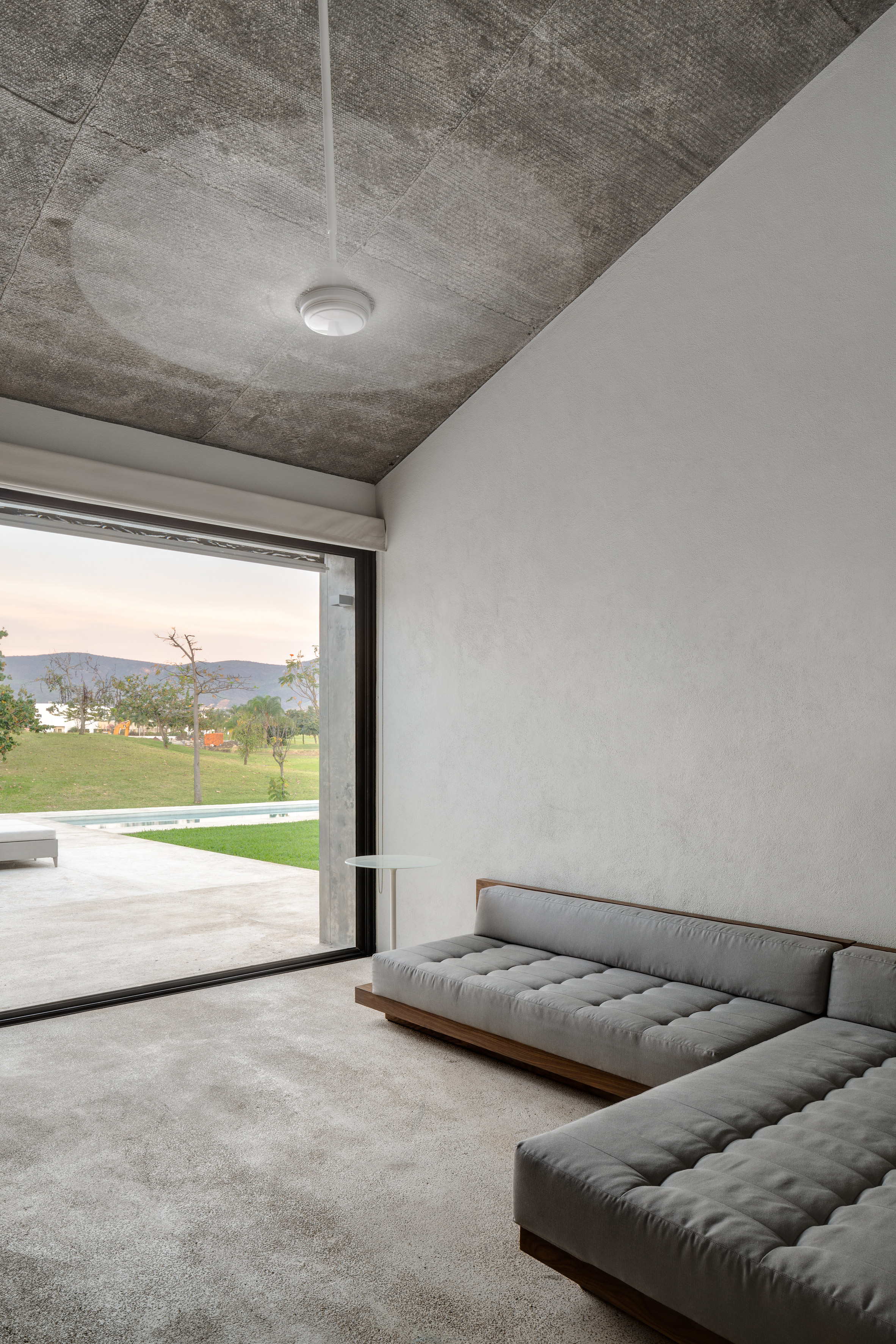 Different spaces inside the residence are divided by a series walls, which run front-to-back to maintain the views outside. A long corridor across the middle cuts through both the rooms at the front and those at the rear. 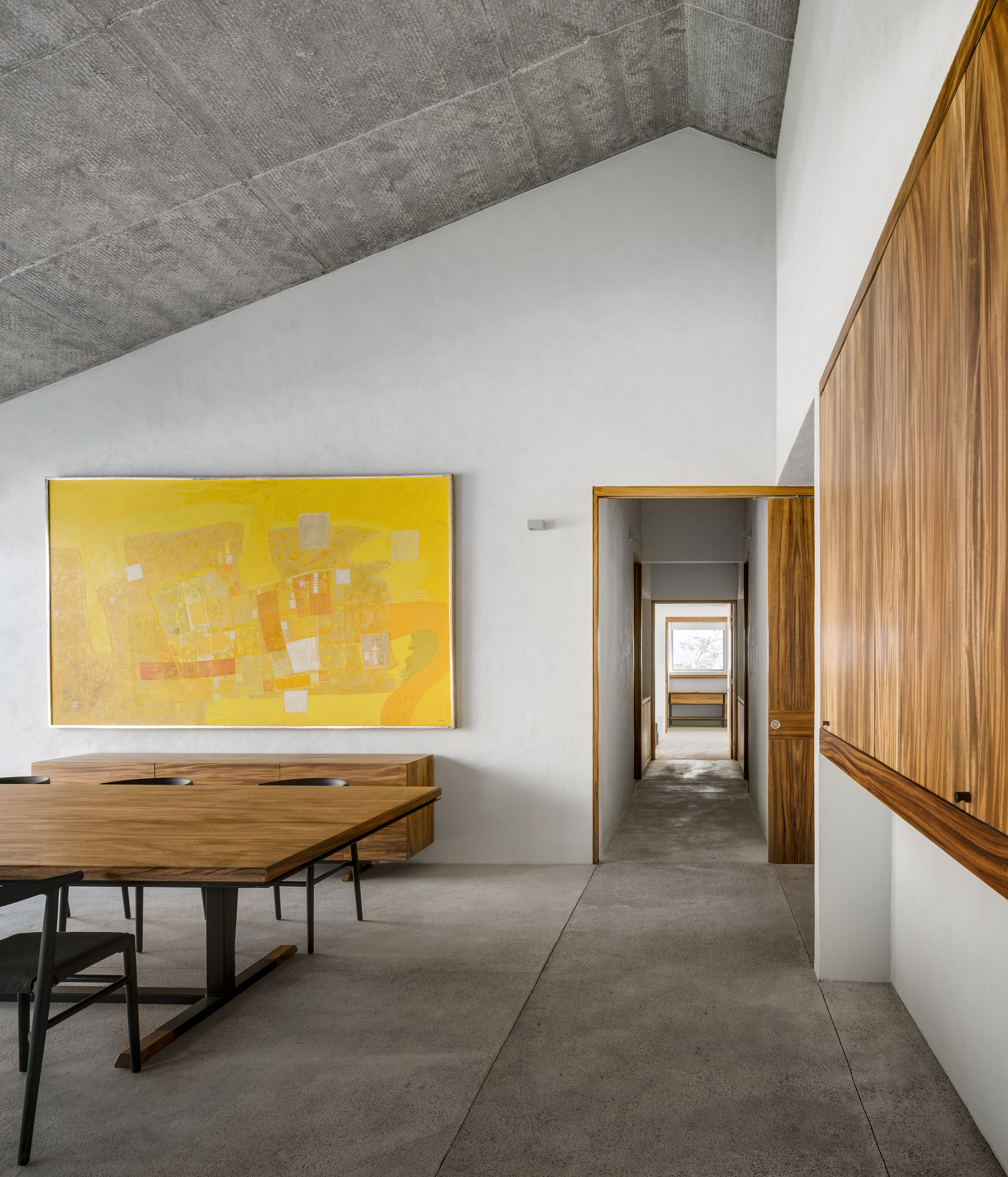 The open-plan lounge, kitchen and dining room occupies the central portion of the residence. Another bedroom and a lounge are set on the western side, while two bedrooms with en-suite bathrooms are placed on the east.

This portion of the building also includes a bedroom with its own lounge and a mezzanine floor accessed by a wooden ladder. 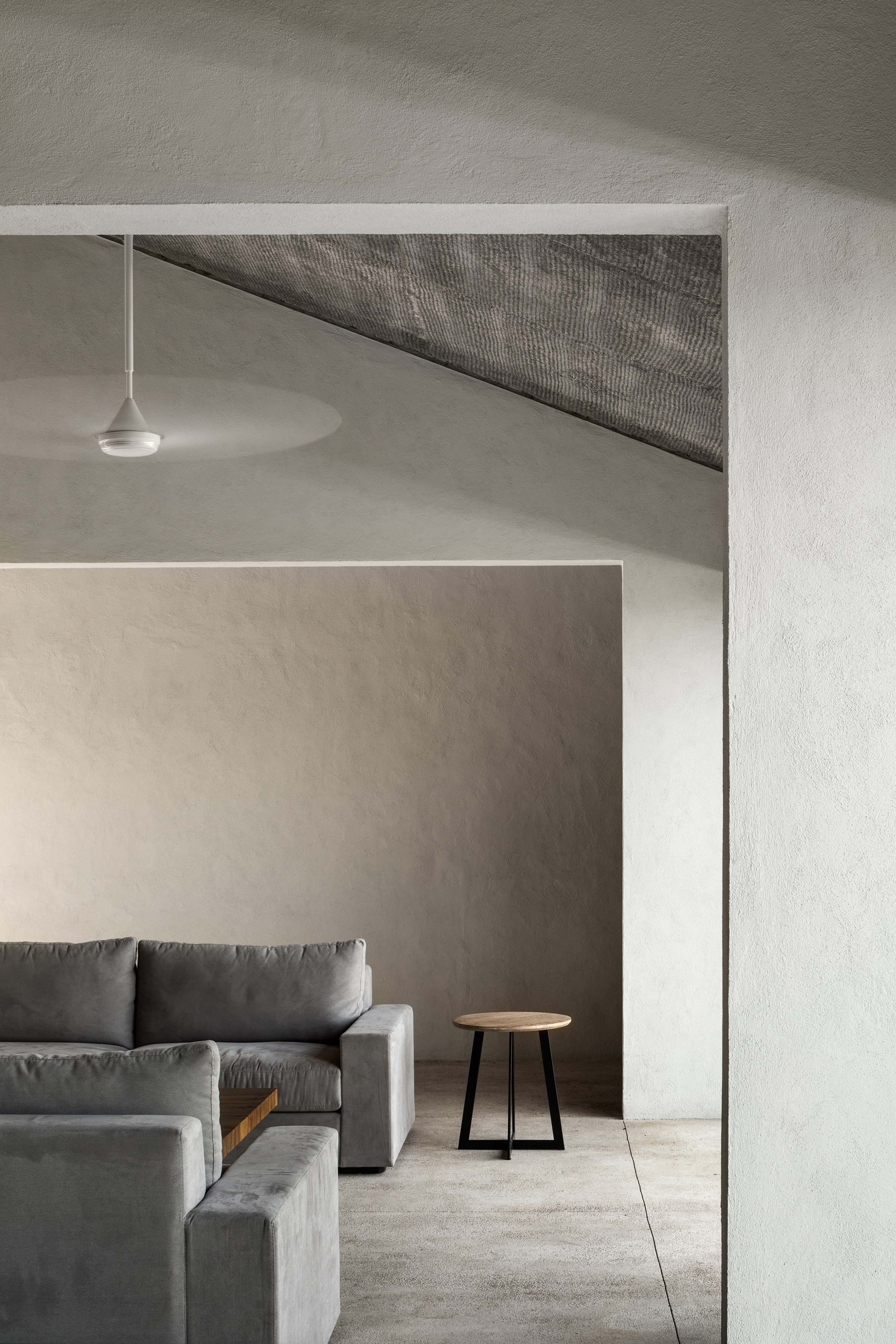 A key feature of the interior is the exposed concrete, pitched roof. Its textured finish was created using knitted petate – a woven fabric used by local artisans to make baskets and traditional objects.

The rest of the interior is finished with a simple, neutral palette, including white-painted walls and exposed concrete flooring, to maintain its “discrete” design and emphasise the outdoors. 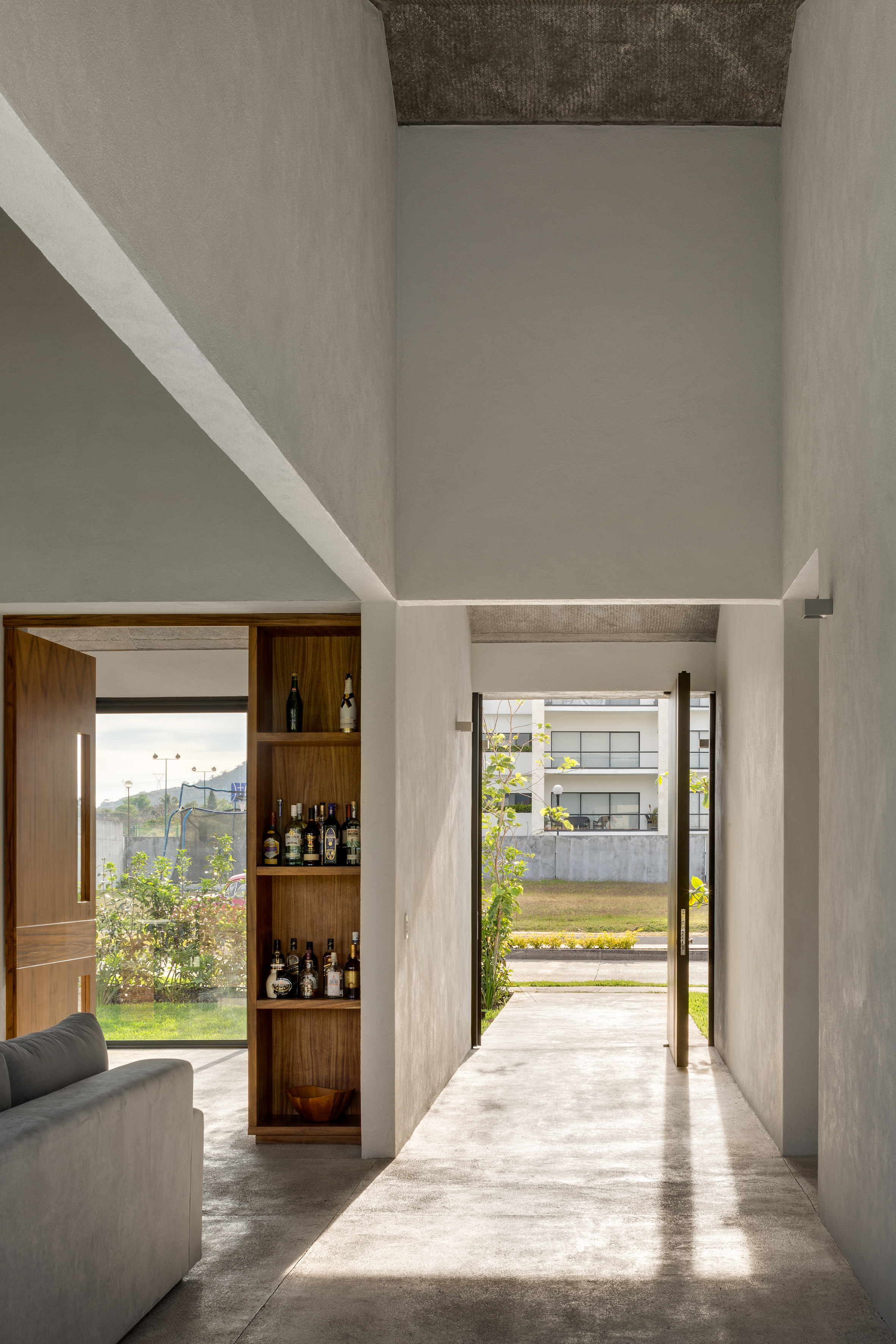 “We didn’t wanted to have any notorious colours or finishes, being coherent with our desire to have a discrete construction immersed in vegetation,” the studio said. 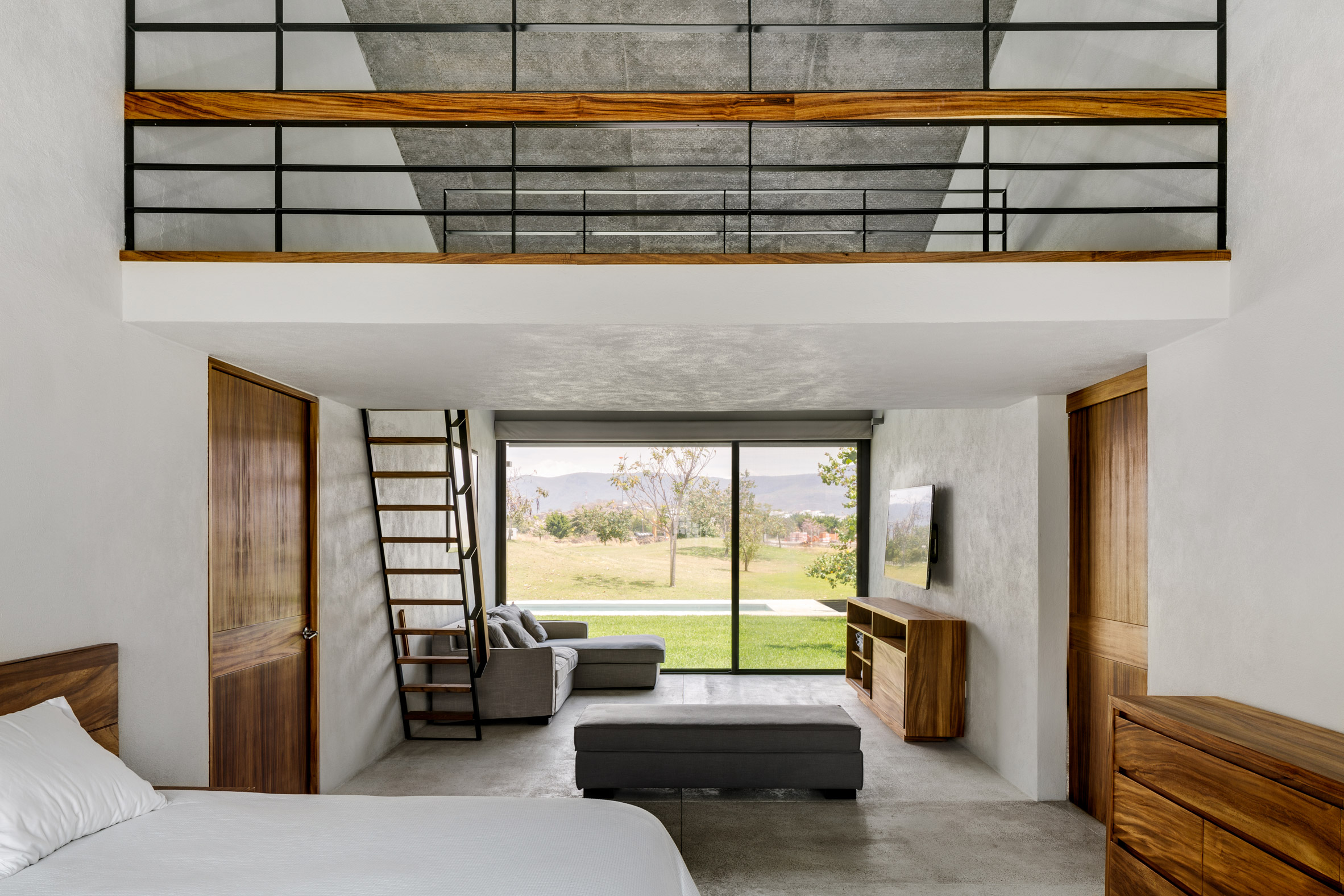 Mexico City-based architecture and design studio LCMX designed the furnishings in the residence.

Guanacaste hardwood – a vividly patterned reddish wood sourced in Mexico – provides a prominent contrast to the more muted tones of the interiors. 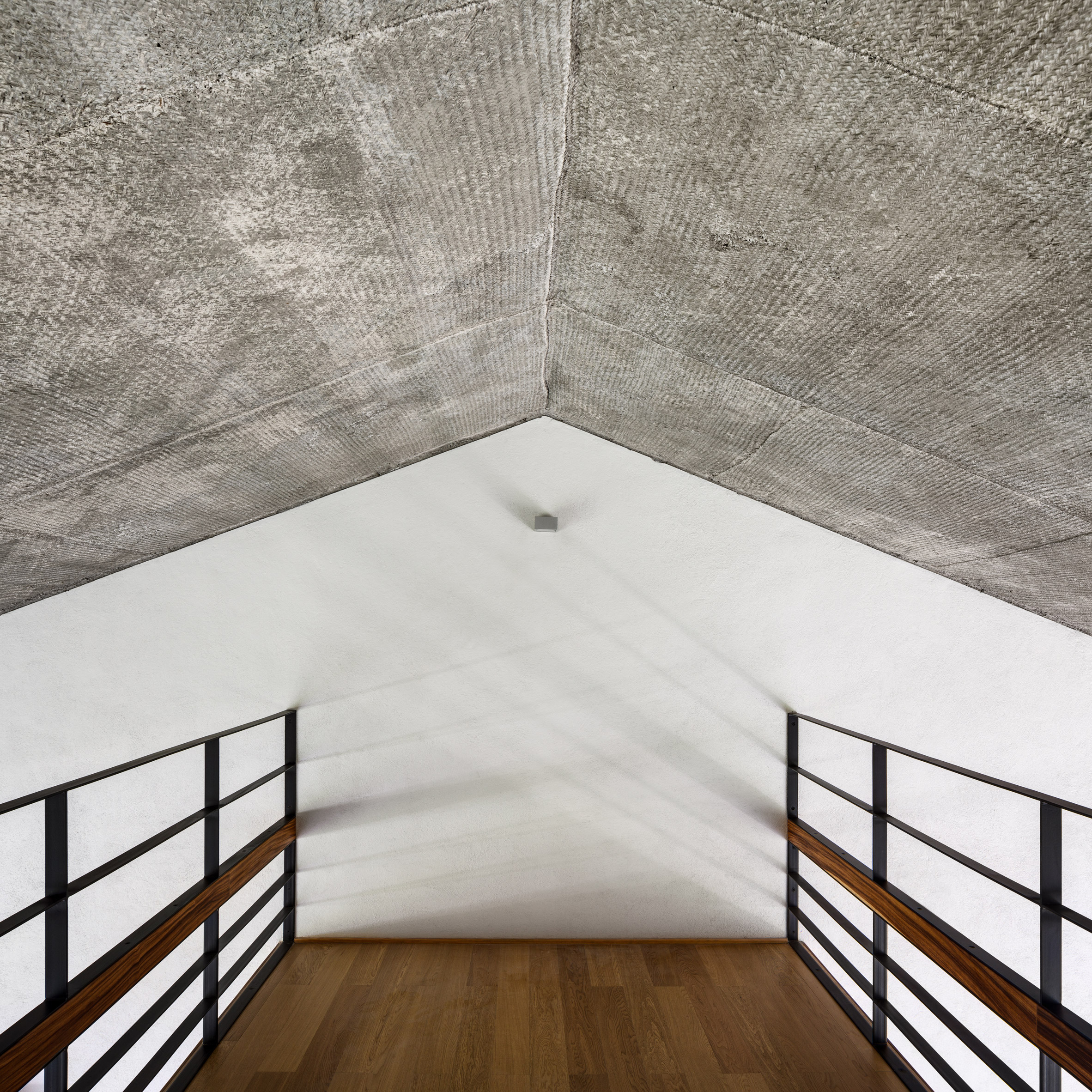 The wood forms the kitchen counter and cabinets, tables and chairs, and storage cabinets, as well as more subtle aspects, including the base of the sofas that are detailed with black steel. 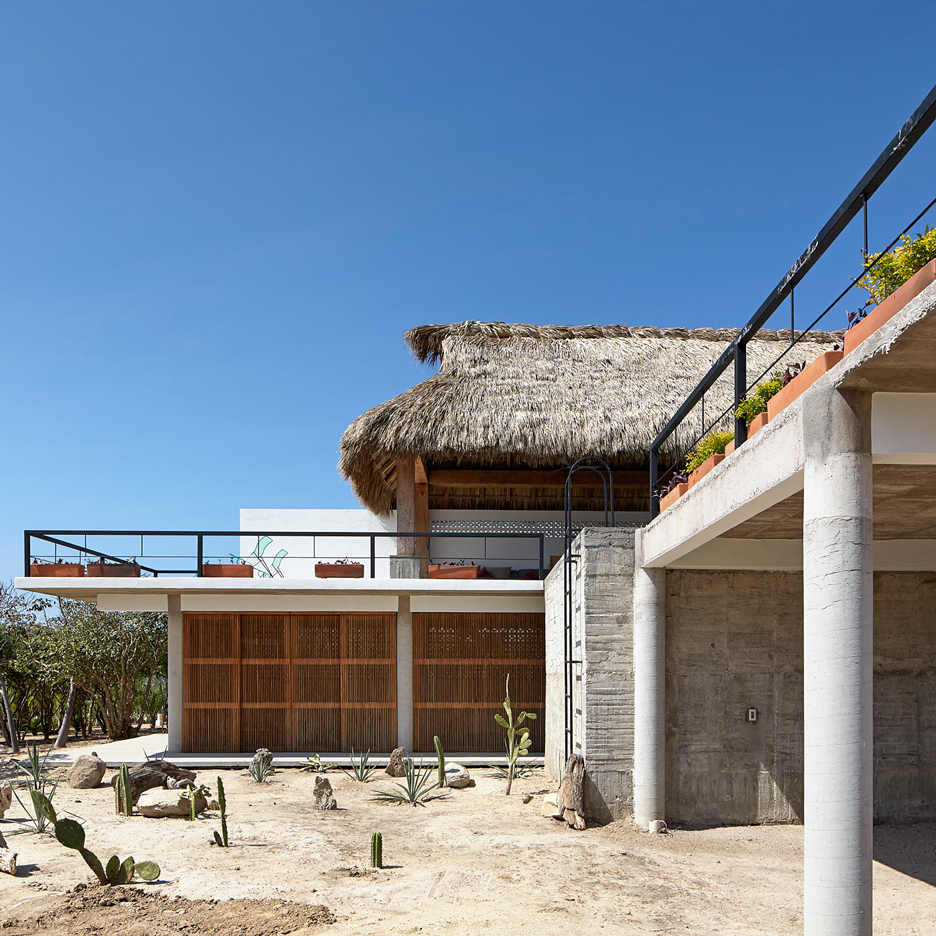