A timber pavilion constructed by a robot and a flat-pack chair from the 18th century are among the objects included in the first exhibitions at the V&A-backed Design Society museum in Shenzhen, within spaces designed by MVRDV and Sam Jacob. 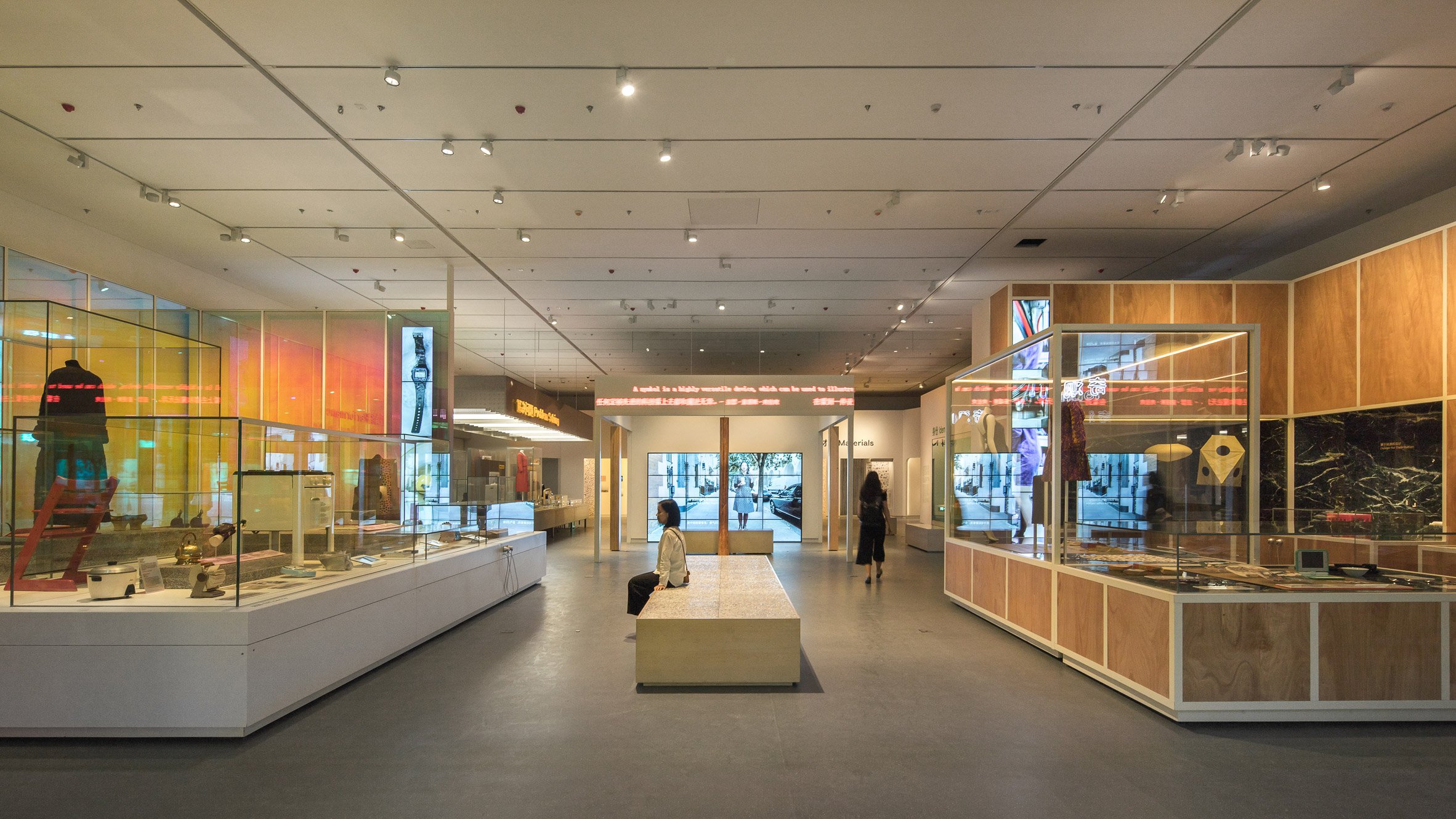 Design Society officially opened to the public on 2 December 2017, in a building designed by Japanese architect Fumihiko Maki for a site on the city’s waterfront.

The museum’s inaugural exhibition, titled Values of Design, launched on the same date, together with a second show called Minding the Digital. 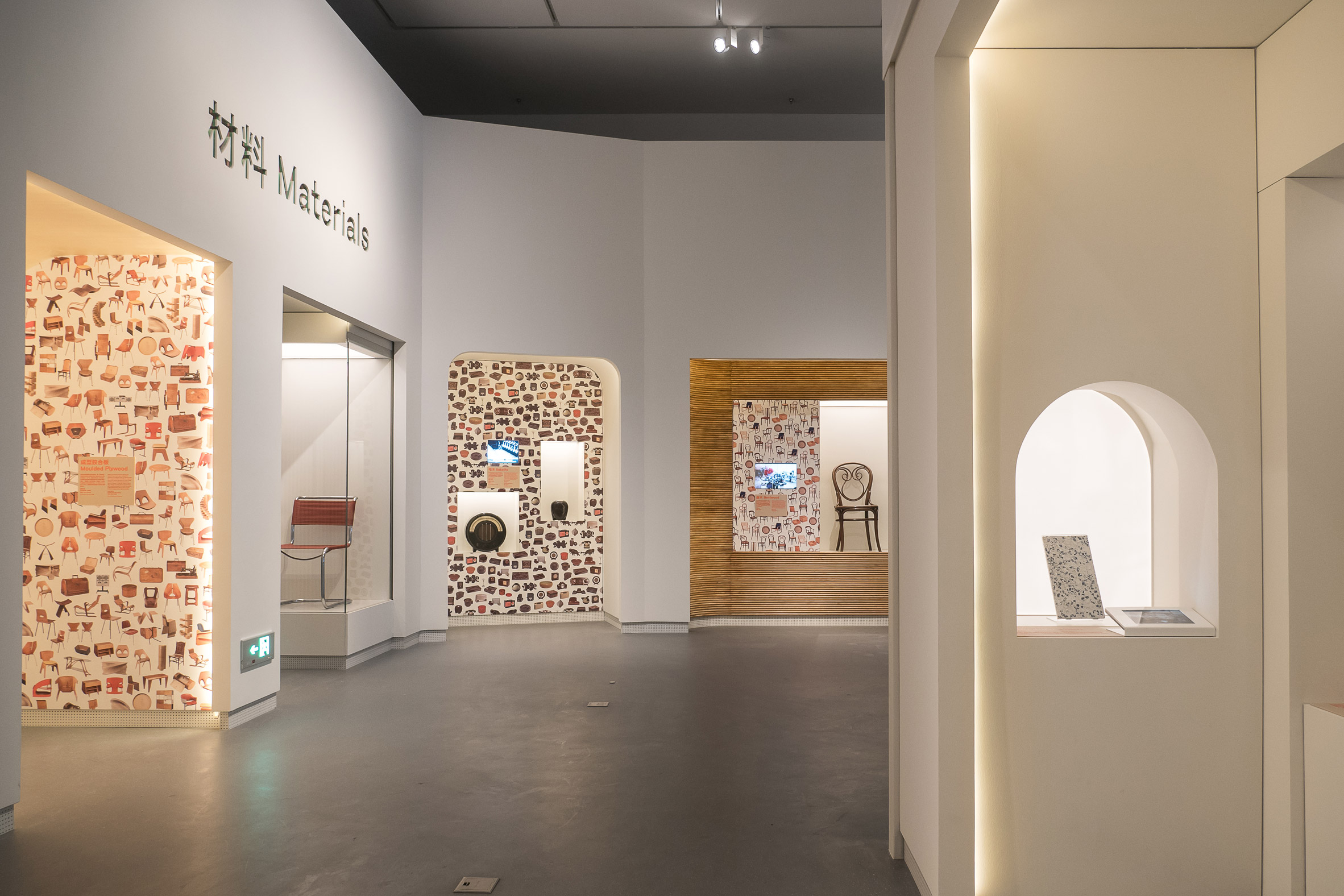 Values of Design looks at how design is regarded across the globe and what principles influence in the industry. It is being held in the permanent gallery space of the V&A museum, which is a “founding partner” of Design Society.

The 250 objects in the show are organised into seven themes – performance, cost, problem solving, materials, identity, communication, and wonder – which intend to highlight their shared design values. 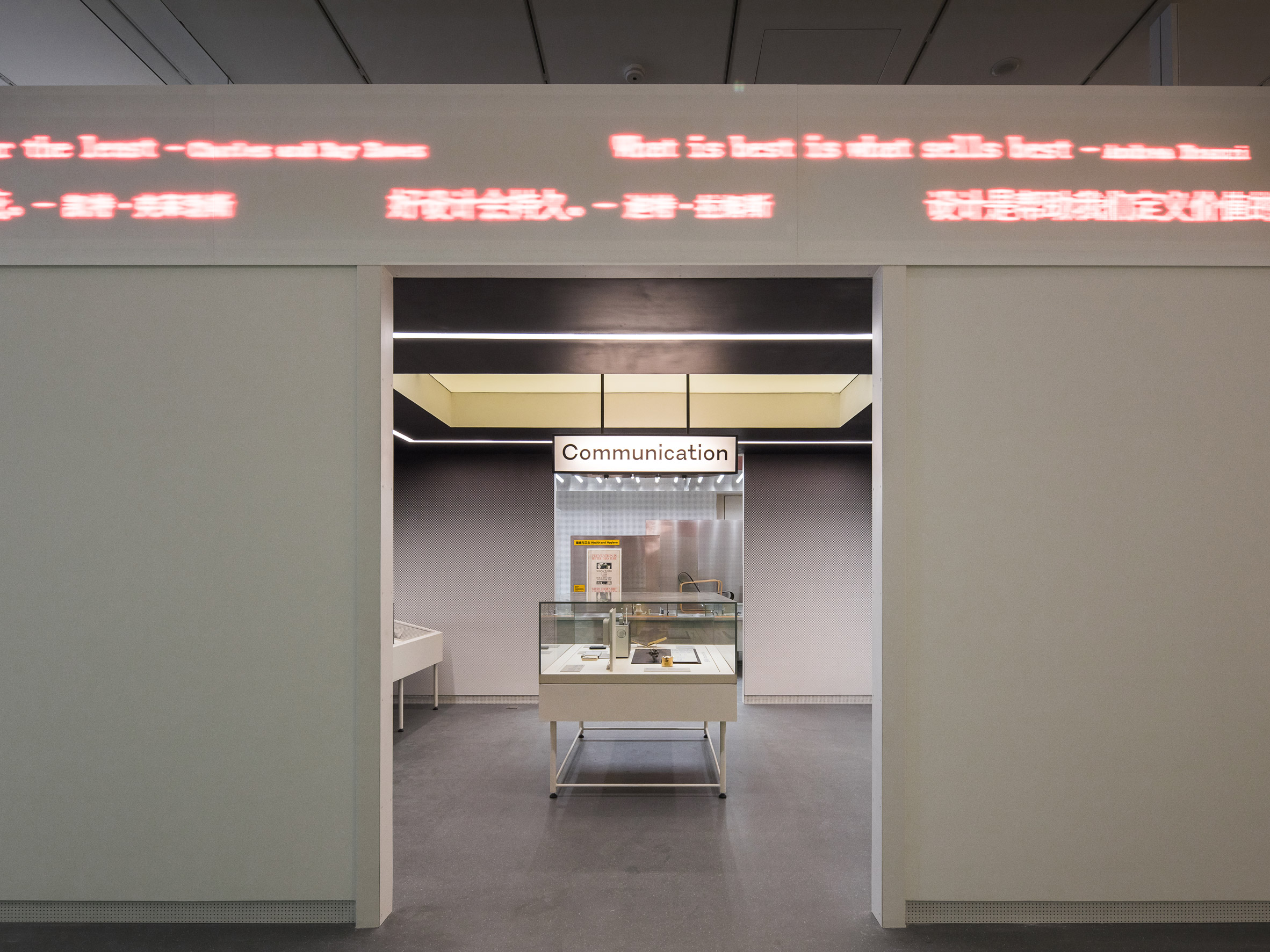 For example, a lacquered chair that was shipped from China to the UK in the 18th century as two flat planks is shown with a stool by Open Desk that can be locally manufactured, illustrating designers’ efforts to create furniture that can be cleverly distributed and assembled. 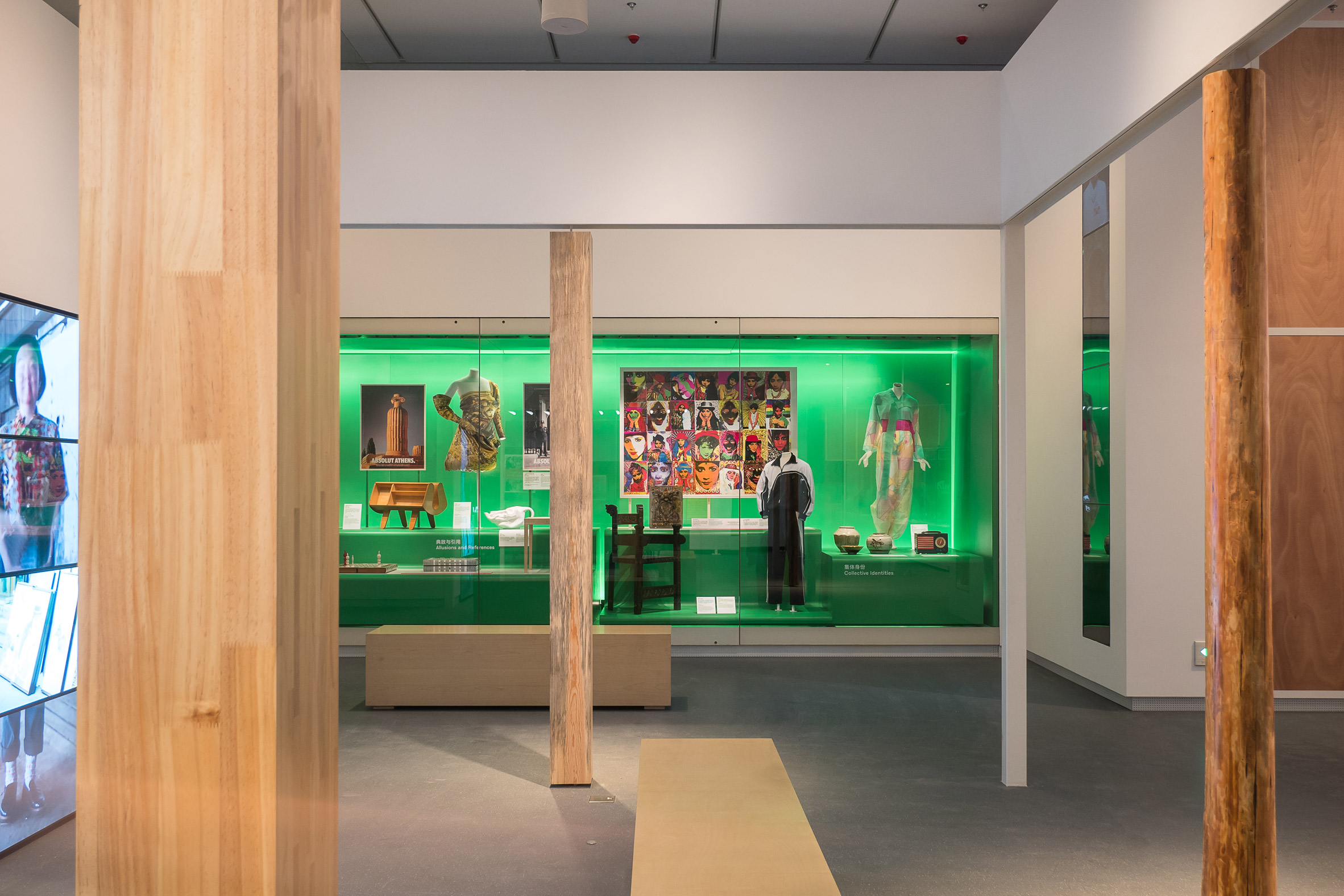 When it came to designing the exhibition space, Design Society tasked London-based Sam Jacob Studio with creating an environment that touched on the multitude of design values presented in the show.

To do this, the studio decided to employ a variety of materials. In the performance-themed area walls have been crafted from dichroic glass, which appear to change colour as visitors pass by. 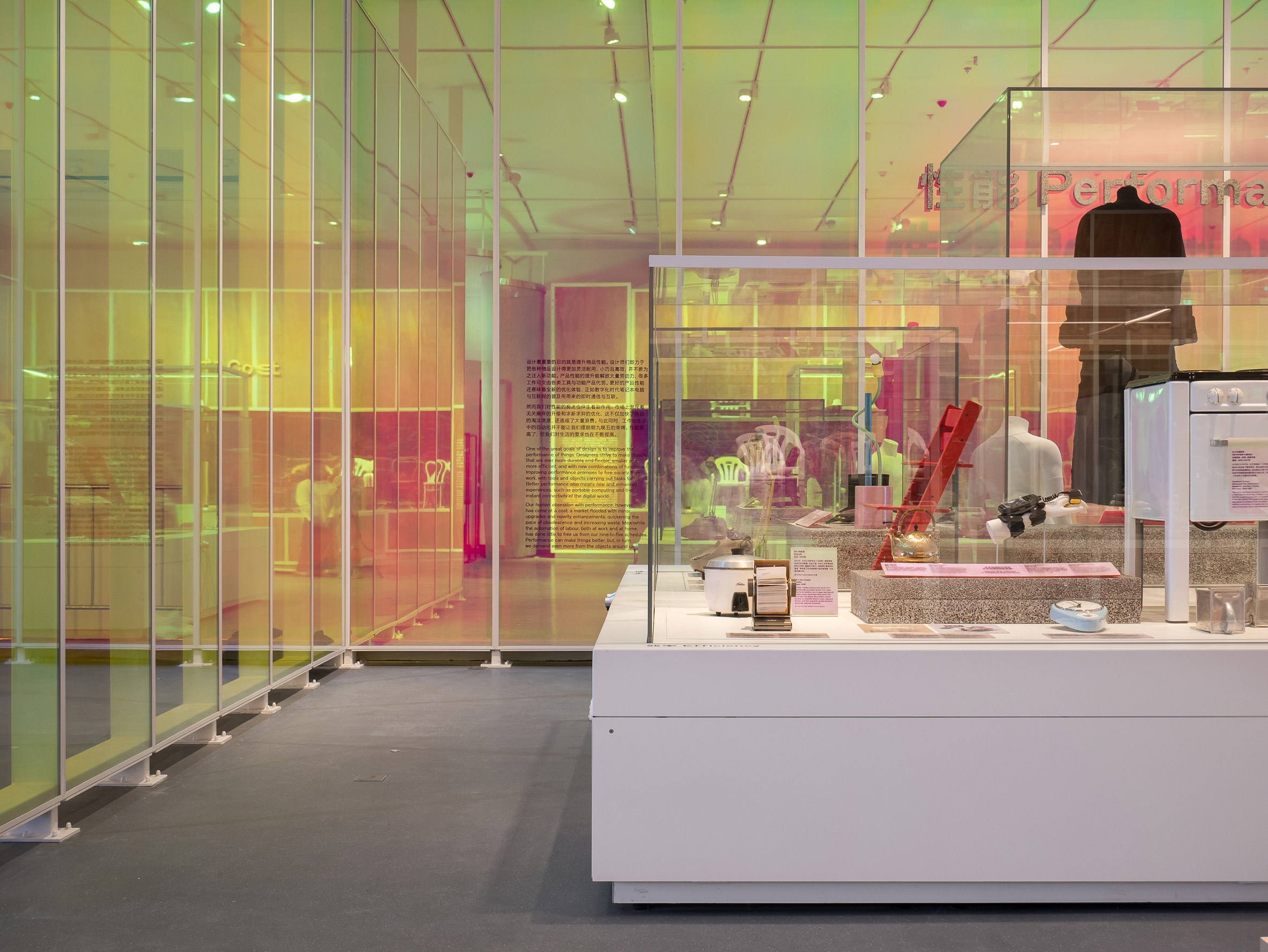 Panels of perforated metal form the Problem Solving section, while marble has been used in the Cost rooms to echo the material palette of the entrance hall in London’s V&A building.

The gallery has also been arranged as a sequence of open-ended rooms, to allow visitors to “create their own non-linear path” throughout the show. 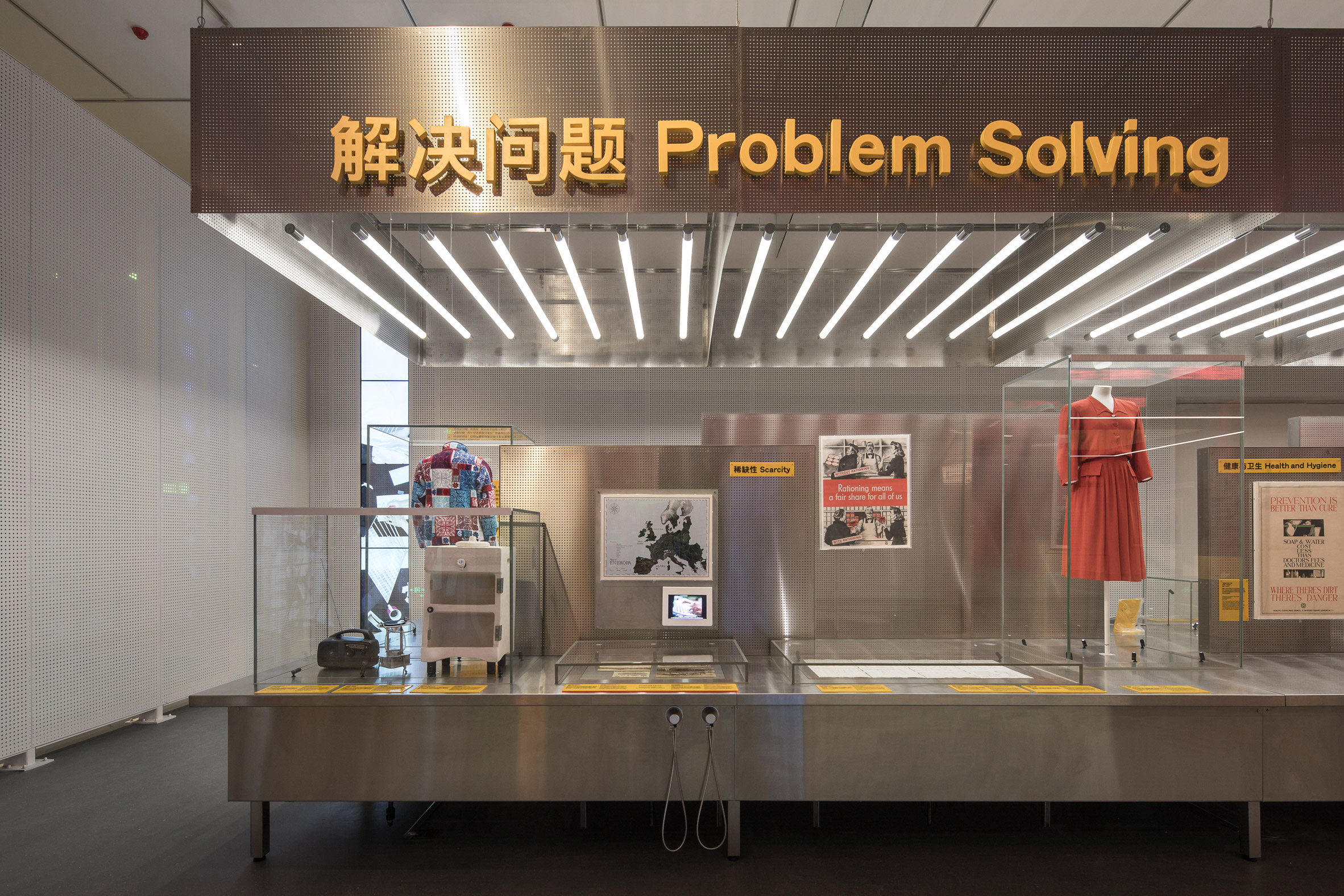 “The new V&A gallery presents design as more than just a matter of ‘good’ and ‘bad’. Instead the show creates an arena of different and sometimes conflicting possibilities,” said studio director Sam Jacob in a statement.

“The design of the gallery organises space, material and media to make this argument both intellectually rich and experientially visceral.” 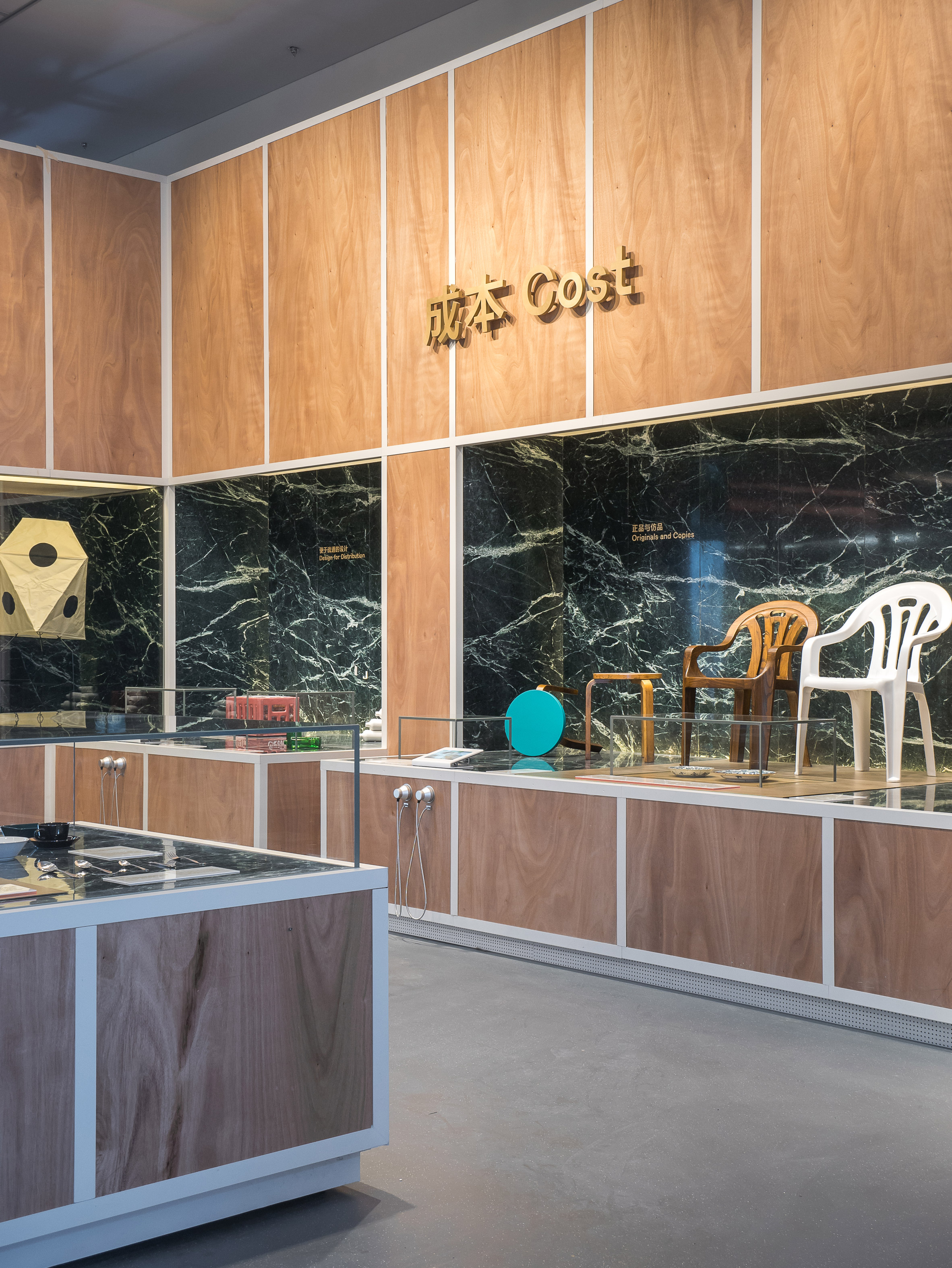 The second exhibition, Minding the Digital, explores how the design industry is responding to digitalisation and advances in technology.

Comprised of 60 works from Chinese and international creatives, the show hones in on three key issues – the crossover of human and machine intelligence, consumers’ relationship to design objects, and the influence of design on communities. 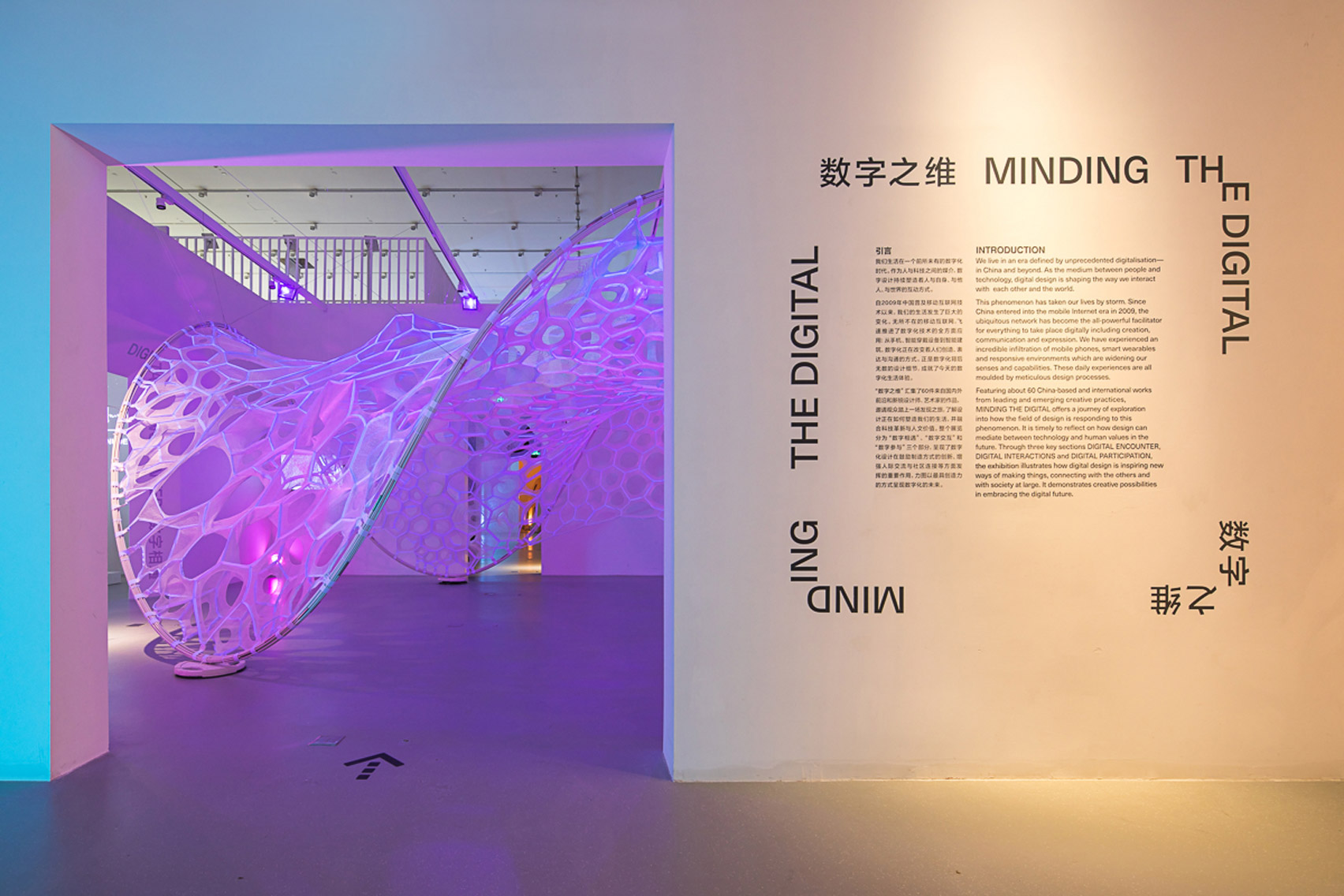 Highlights include a robot-built pavilion, which comes out of a collaboration between University of Stuttgart‘s Institute for Computational Design and Construction, and the Digital Design Research Center that is based at Tongji University in Shanghai.

When drawing up the concept for the wooden structure, which is called The Sewn Timber Shell, the two organisations experimented with robotic sewing. 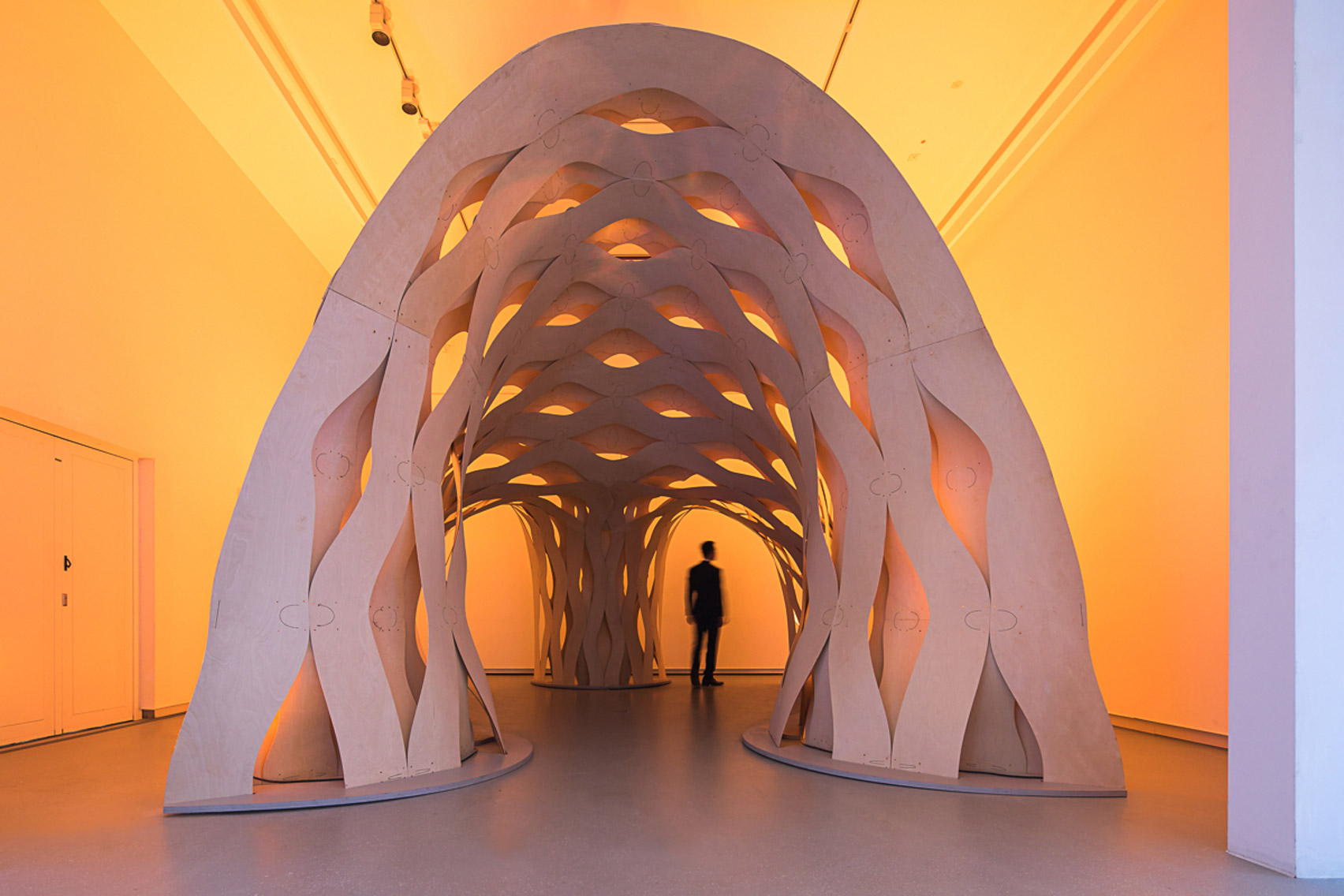 They closely studied the use of robotics in clothing design and industrial sewing techniques, hoping to “re-interpret them in a new material context”.

As a result, fabric has been traded for rippled sheets of plywood, which weave together to form diamond-shaped openings along the walls and ceiling of the pavilion. 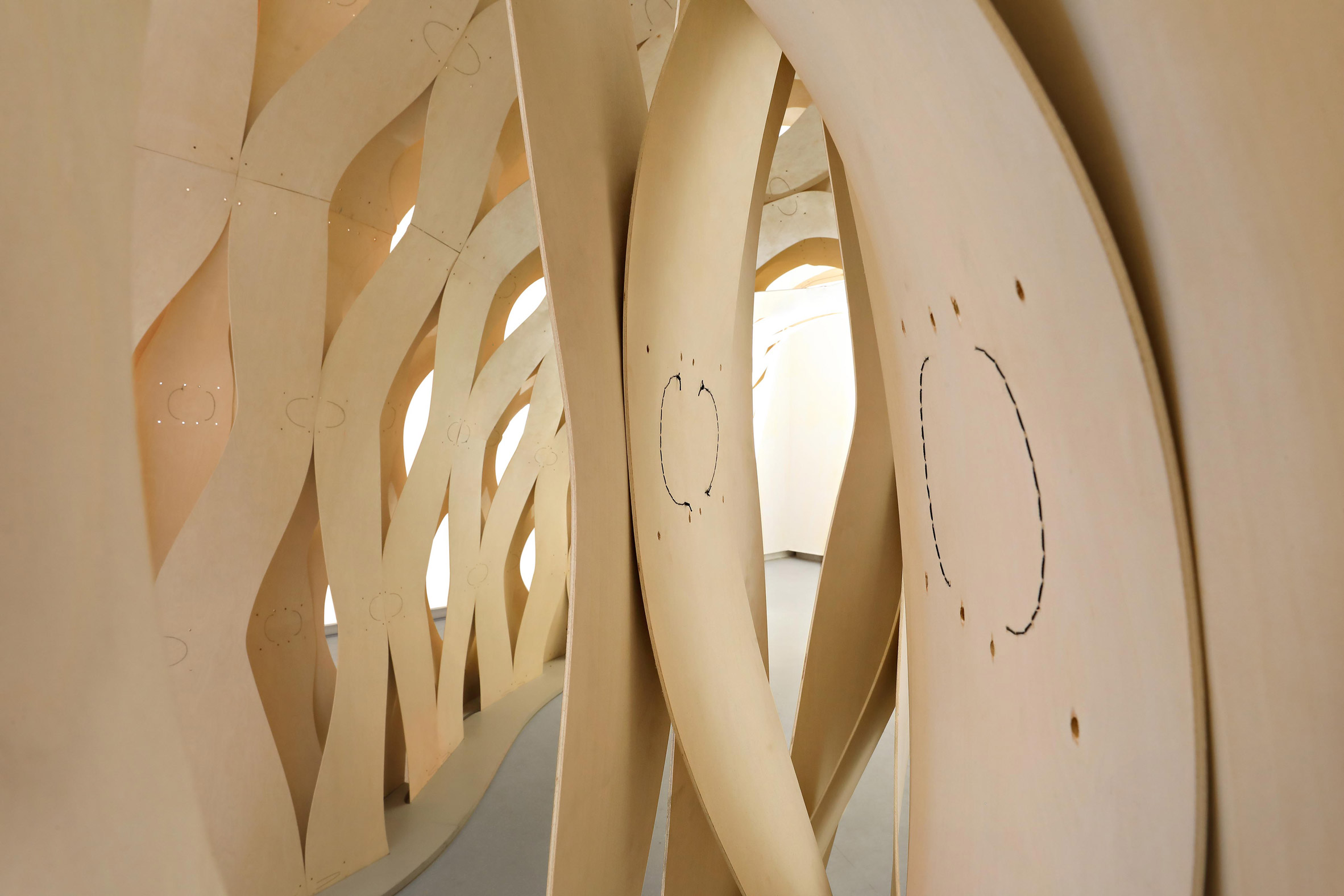 Other works featured include a 3D-printed chair by Dutch designer Joris Laarman, which was designed to emulate the structure of cells, and dresses by Montreal-based fashion designer Ying Gao, which move and light up when under someone’s gaze. 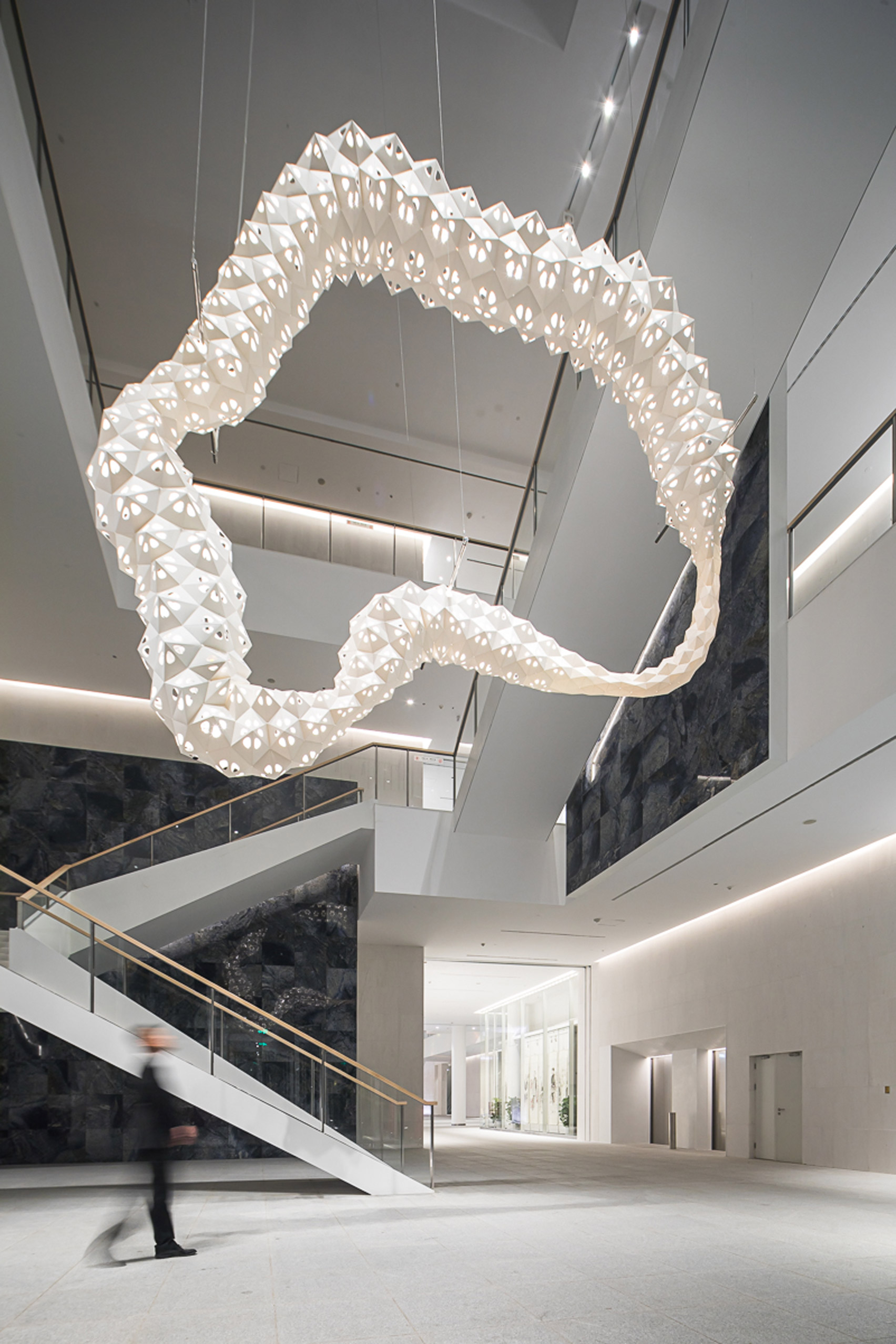 For the spatial design of Minding the Digital, Design Society briefed Dutch practice MVRDV to create an exhibition setting that visually reflected the “multiple design directions generated by digital thinking”.

On the first floor of the exhibition hall the architects implemented a series of interconnecting, maze-like rooms. They have each been illuminated with different colour lights to give the impression of individualised zones. 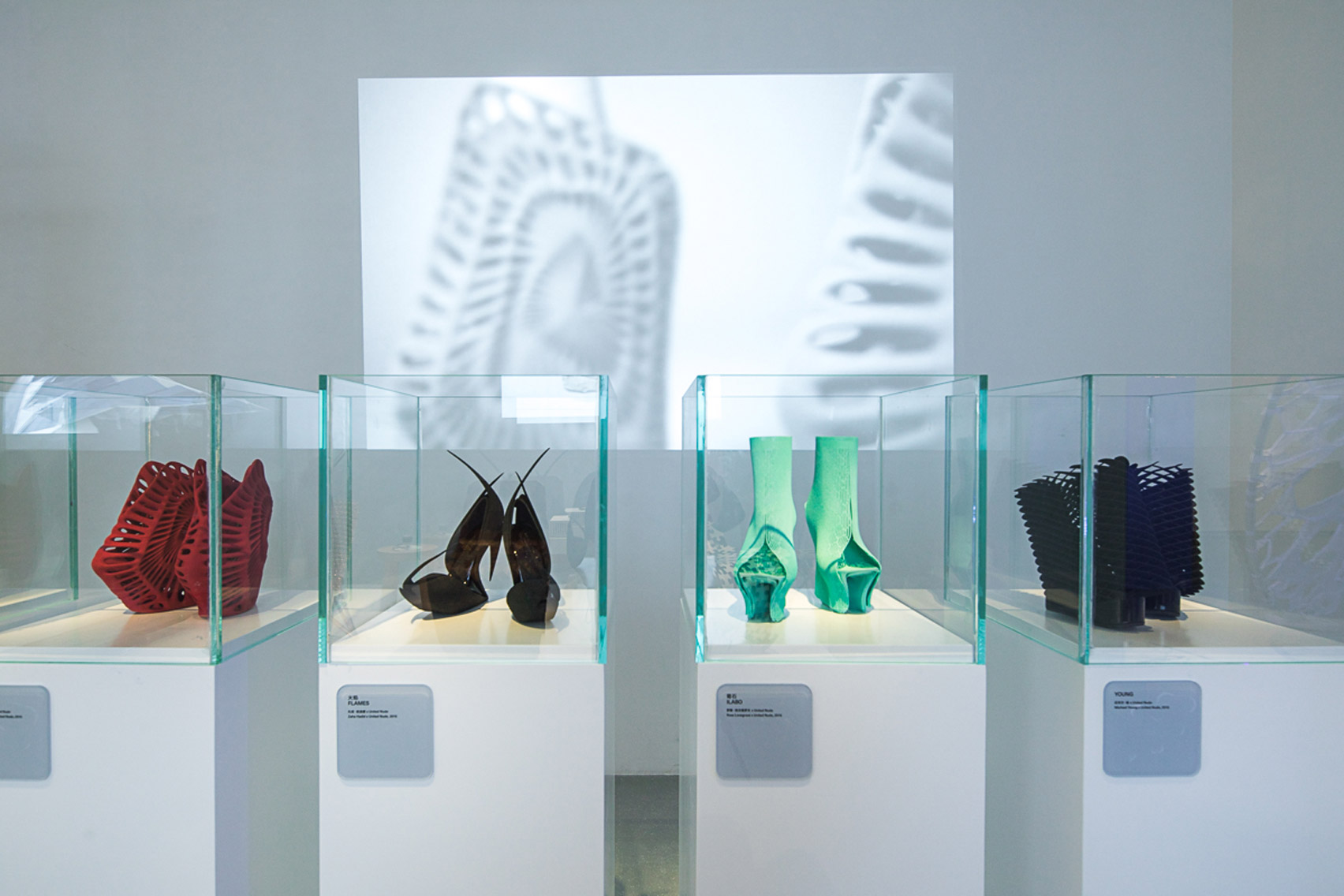 The second level features several sets of white steps, which ascend to small display areas fitted with glass floors so that visitors can observe exhibition rooms below.

“We have created here a labyrinth, a mini village for all the digital artists with each room adaptive to the art, ideas and products,” said MVRDV co-founder Winy Maas. 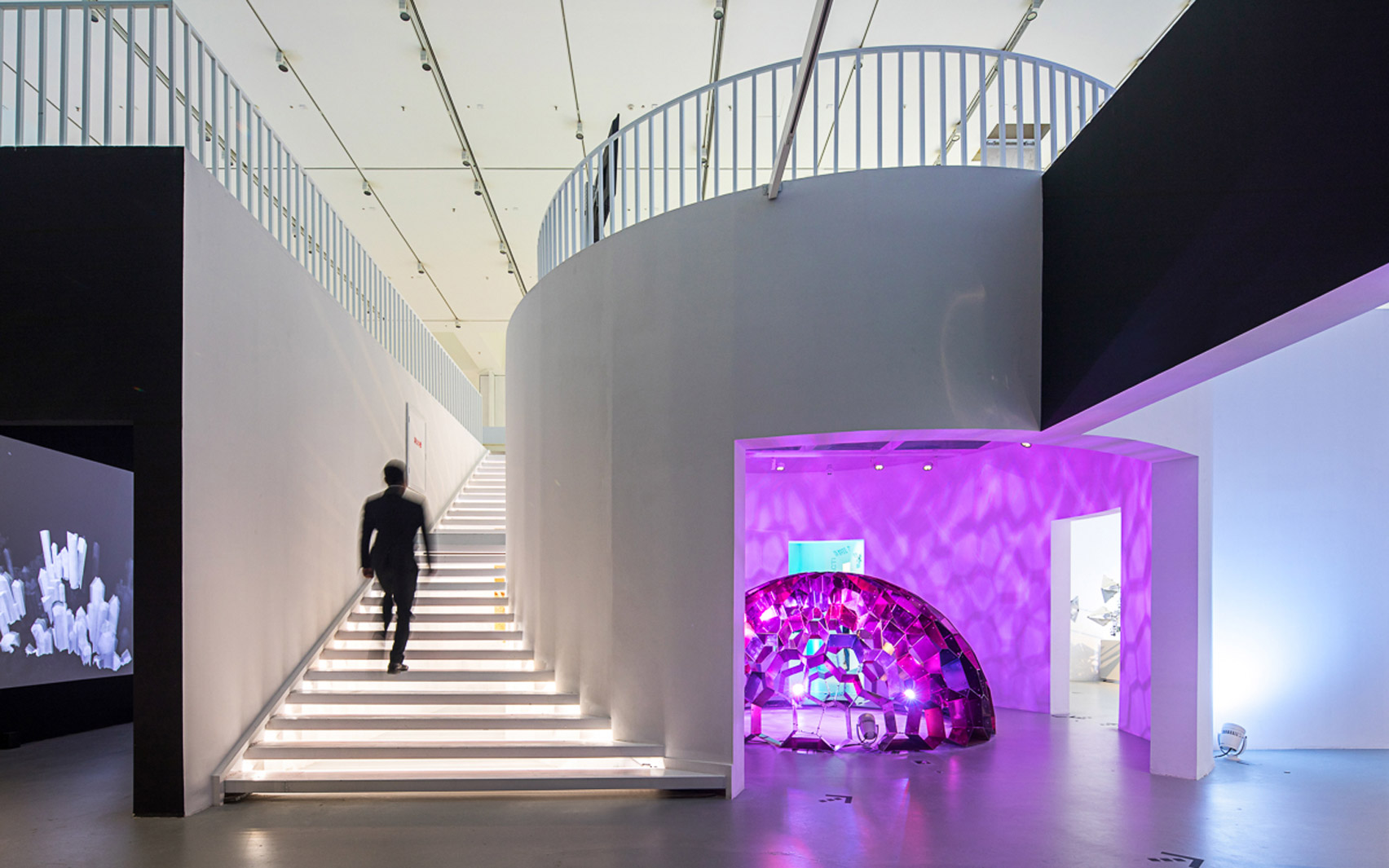 The exhibition continues until 3 June 2018, with the Values of Design open until 4 August 2019.

Photography is by Zhang Chao. 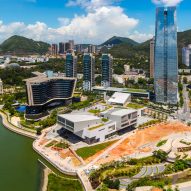