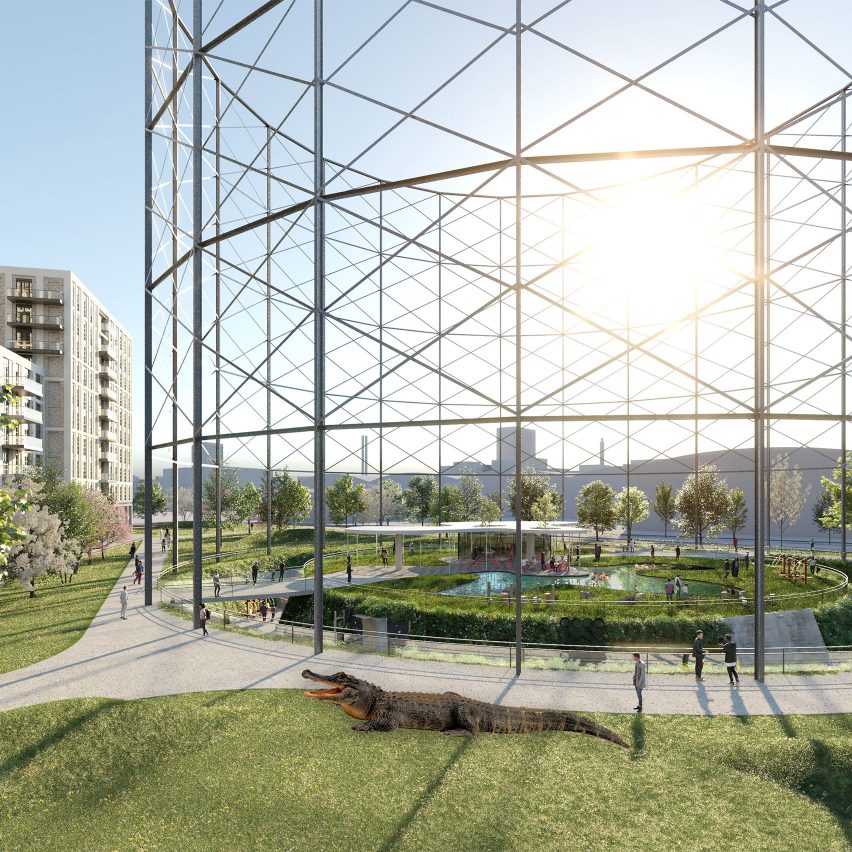 Developer Avanton has acquired a Grade II-listed Victorian gas holder in London and is exploring plans to turn it into a habitat for alligators as part of a housing development.

Farrells, Maccreanor Lavington and Patel Taylor are three of the architecture studios that Avanton has worked with previously and are considering for a housing development in south east London that would include this unusual attraction.

“The alligator park and farm concept came to us after we were approached by an out-of-town specialist looking for a location for an alligator park in the capital,” said Avanton director Marc Pennick.

According to the developer, the 20-metre-deep gas holder on Old Kent Road could be turned into a suitable habitat for the alligators to swim about in.

The sides of the structure above ground, which are almost 50 metres high, would be enclosed with shielded glass to turn it into a glass enclosure for the large reptiles.

Alligators can survive in the cold, but will only breed and lay eggs in warmer temperatures between 27 and 33 degrees Celsius. Sliding panels in the glass conservatory would allow the temperature to be adjusted to keep the reptiles comfortable and the park open year-round.

A visitor centre and educational facilities would also be part of the alligator park and Avanton has assured those concerned about the animal’s welfare that the attraction will only go ahead with the consultation of reptile experts.

London does not currently have an alligator park, although there is a species of crocodile in the reptile house of London Zoo.

Although Avanton has suggested the park, and created a visualisation of how it might appear, it is currently one of several options the developer is exploring for the site.

“We want to turn the gas holder into something really special for London, so alongside the alligator park we are also looking at the option of turning it into a large lido and leisure deck complex, and are also thinking about an artistic garden with water features,” he added.

The Old Kent Road gas holder sits on a four acre site that Avanton plans to turn into a mixed use development of housing and commercial space.

Plans also include a second site next door with permission for 1,152 houses – 40 per cent of which it promises will be affordable housing – plus commercial space for light industry and a sports centre.

A third site with 262 houses is currently at the planning stage.

The gas works on Old Kent Road in Southwark were built between 1879 and 1881 by the Victorian engineer George Livesey, and was repaired in 1942 after it was damaged in the second world war.

It was the biggest gas holder in the world when it was first constructed, and is considered a piece of radical design for its pioneering use of a cylindrical lattice shell and thin wrought iron.

In London’s King’s Cross area a decommissioned gas works has been turned into luxury flats and a circular park.