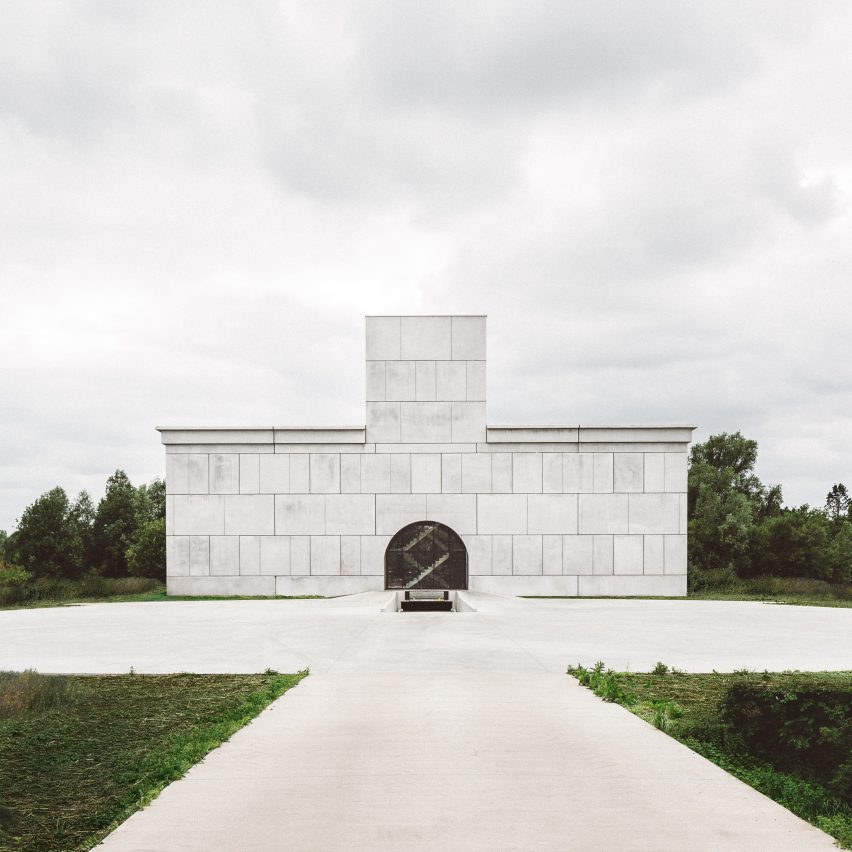 The concrete form of this factory for Camp’s in Oudenaarde, Belgium, is driven by the mustard production processes and Dhooge & Meganck’s desire to create a building with “soul”.

Ghent-based architecture studio Dhooge & Meganck designed the factory and storage facility for Camp’s – a producer of traditional pickles, mustard and preserved vegetables – as the company’s former home did not meet rising standards for food safety. 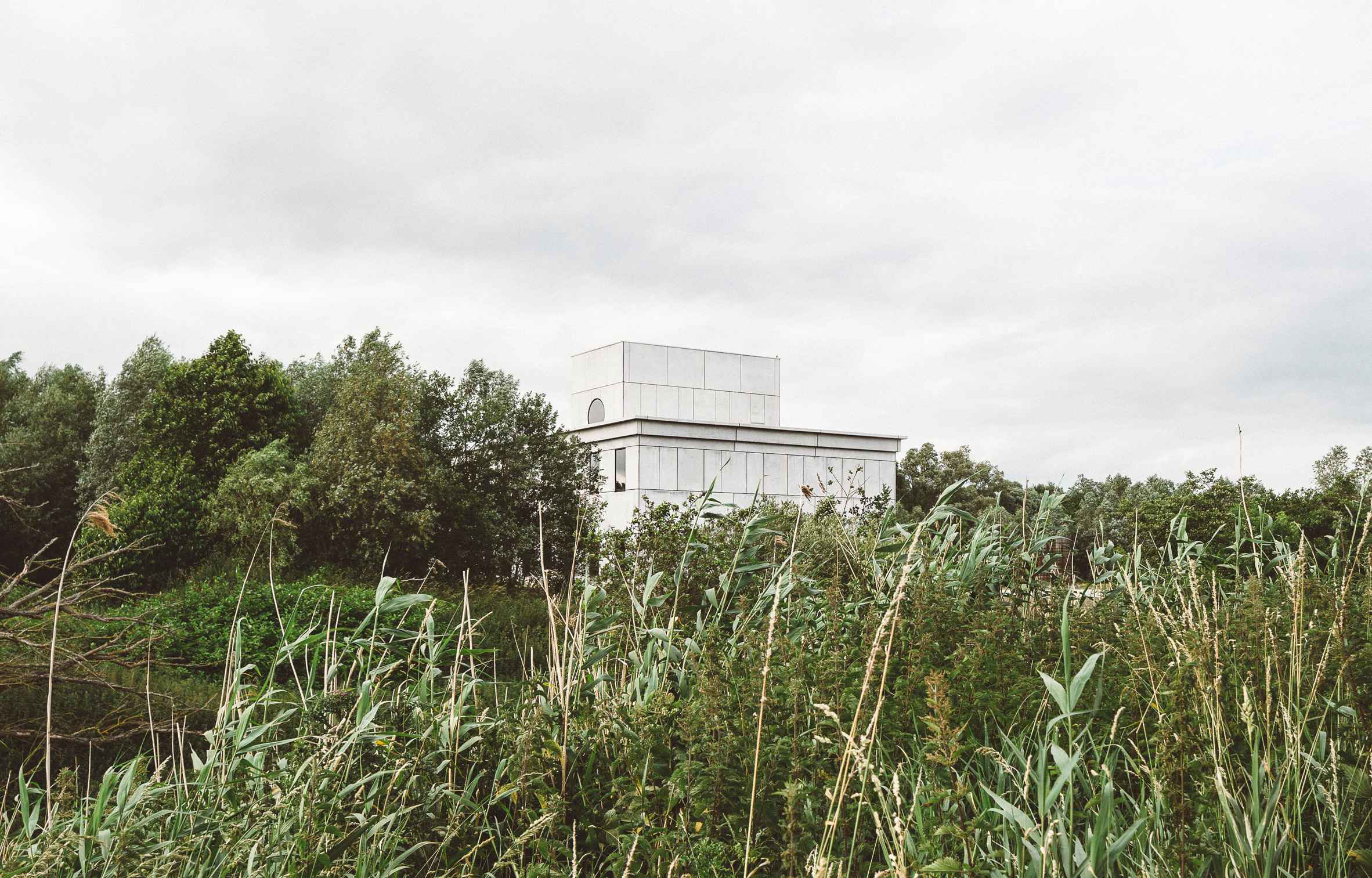 Centred around a “mustard tower” for the storage and processing of grain mustard, the building is made from two concrete shells – one for the interior and one for the exterior – with a layer of insulation between them.

The shells are constructed from concrete panels suspended from a standardised system of concrete columns and beams to reduce construction costs. 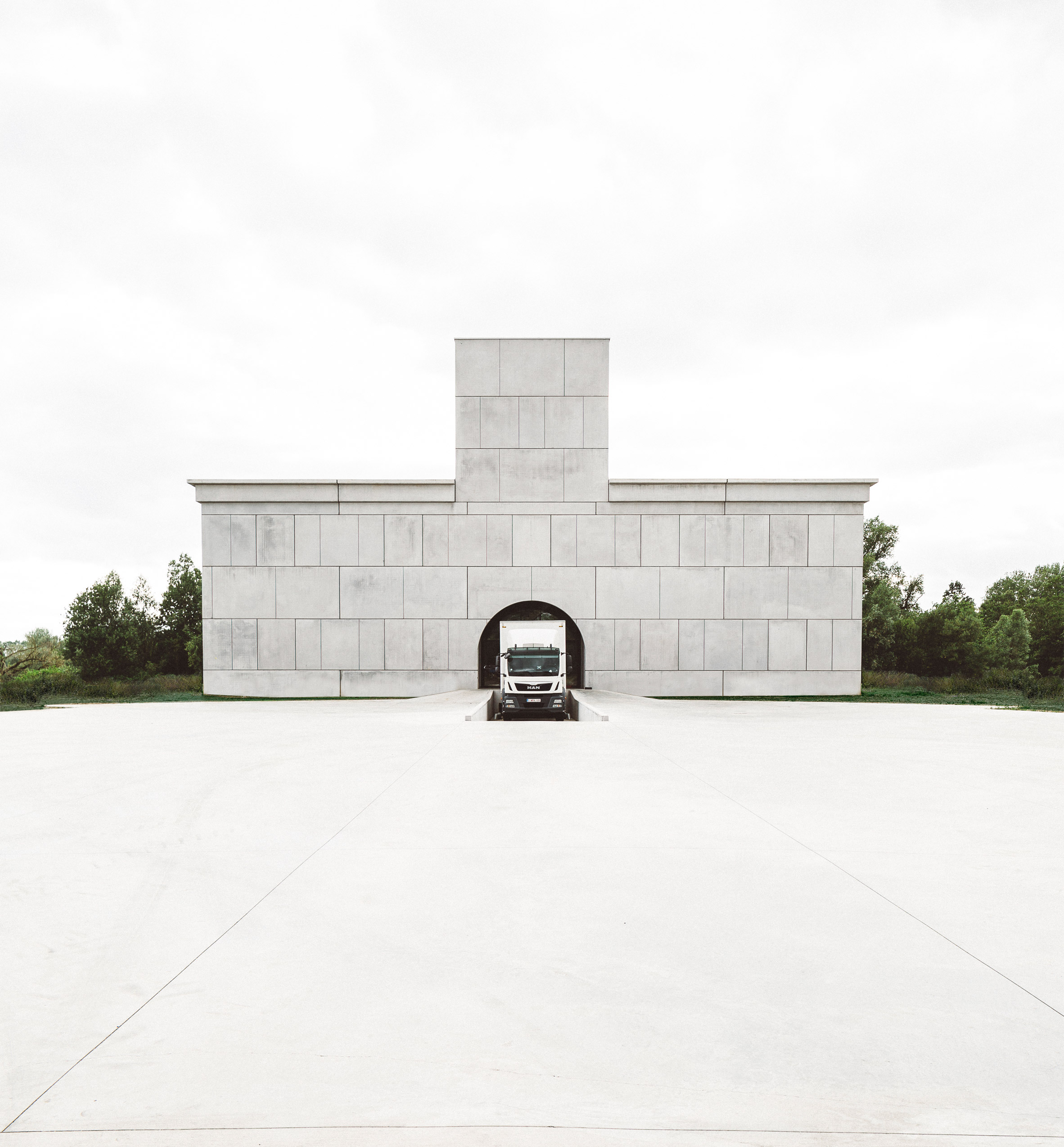 The only visible opening on the front facade, which covers most of the food storage areas, is a large arch above an access ramp, approached from a circular drive.

The back, where most of the workspaces are located, has two rows of black-framed, rectangular windows and doors with views out over the surrounding greenery. The “mustard tower” also has a round window at the rear. 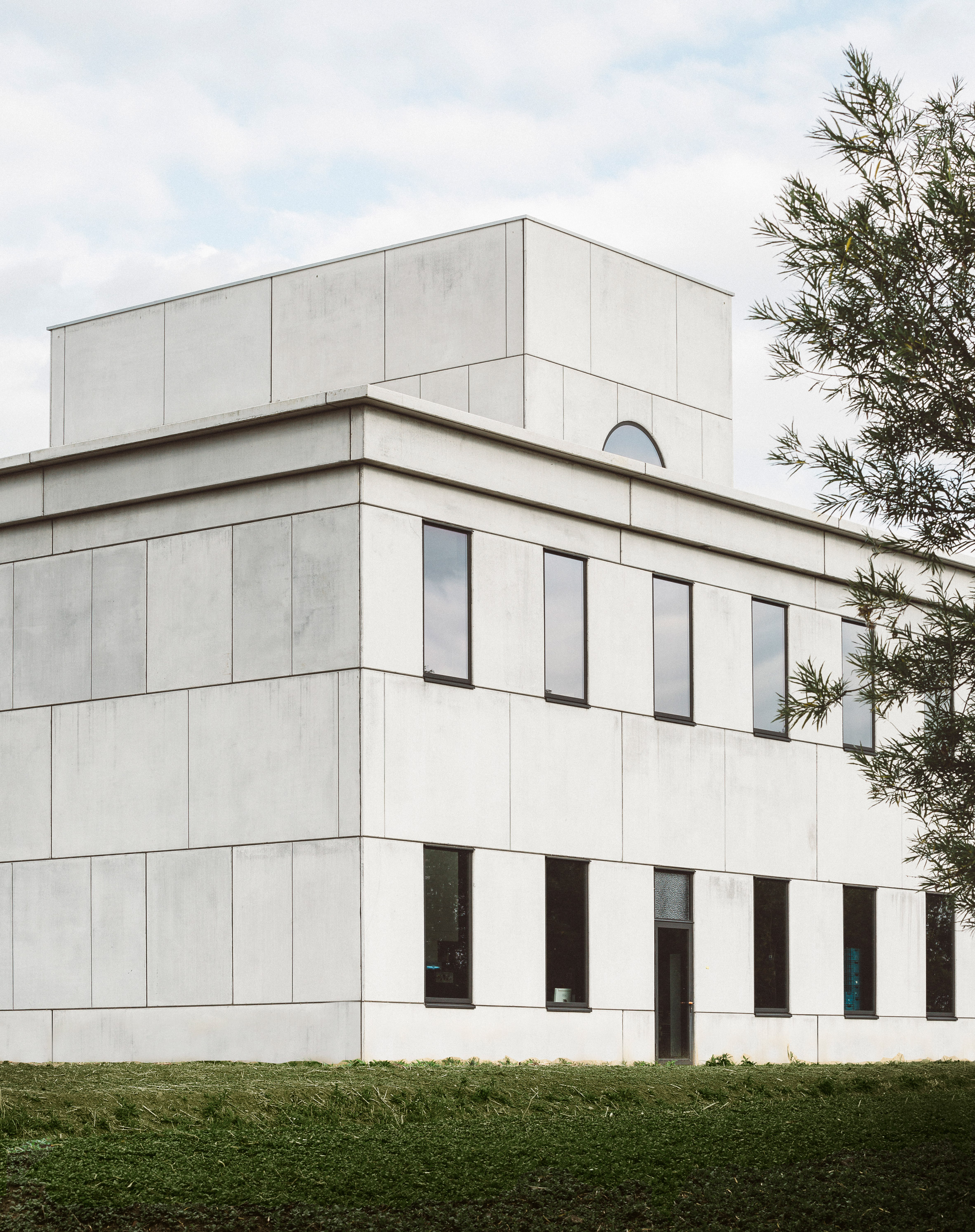 “Camp’s is a contemporary abbey, a place where, supported by architecture, you experience the magic of the production process,” Dhooge & Meganck told Dezeen.

“The mustard tower is the symbol of two years of design research and the renewed, vertical production process,” the studio said.

“The facades literally translate the inside of the building. The front accommodates only storage that is UV sensitive, the back is completely cut-out to the underlying nature in favour of the workspace where it is produced. Not a typical closed food-safe box, but an open space.” 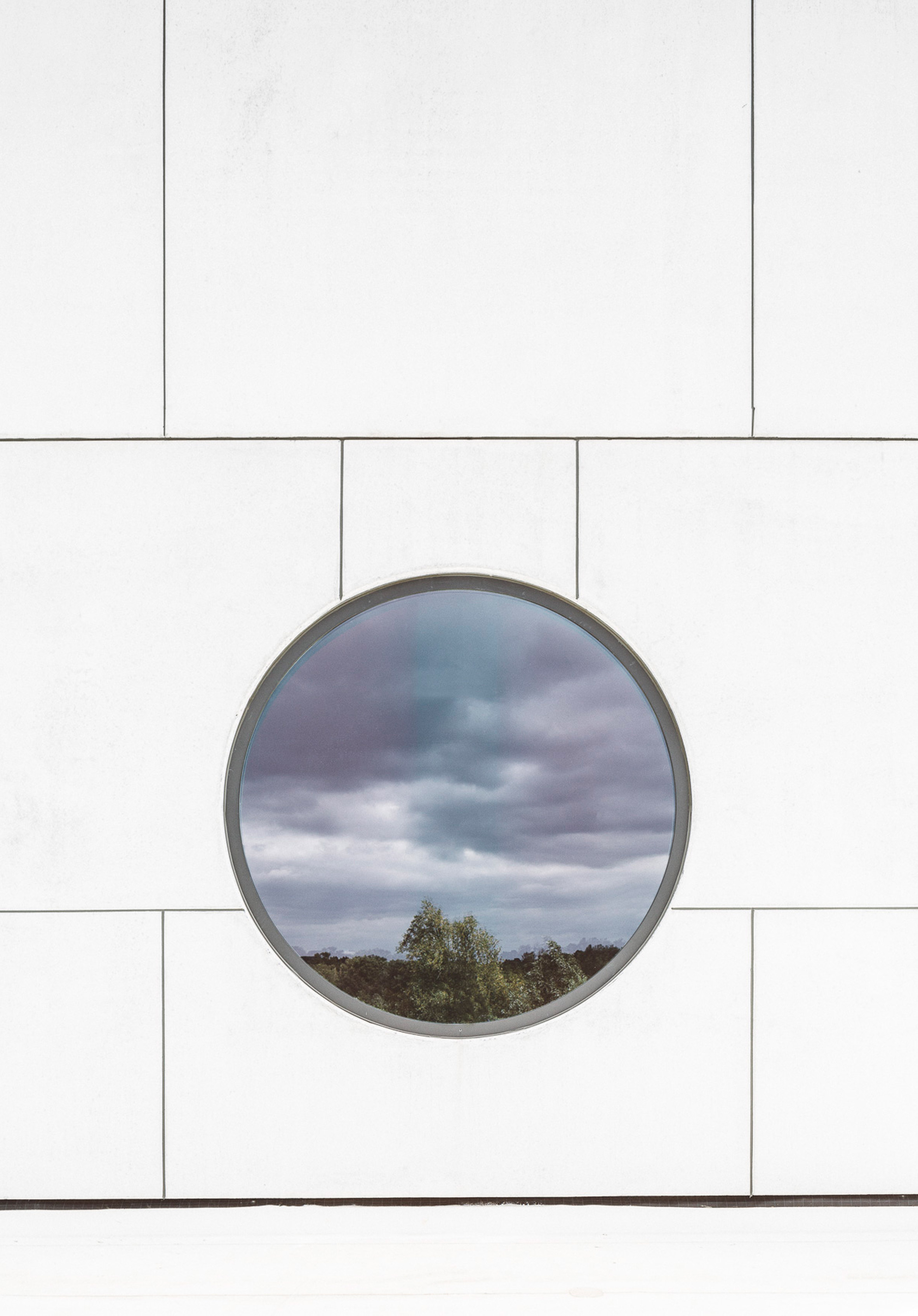 The tower contains two 30,000-litre grain silos. Their raised position means that the manufacturers can use gravity to transport the grain to the malting spaces on the first floor.

This level also contains a “vegetable square” where the preserved vegetables are de-brined, as well as a tasting room and guest reception, refectory and changing rooms. 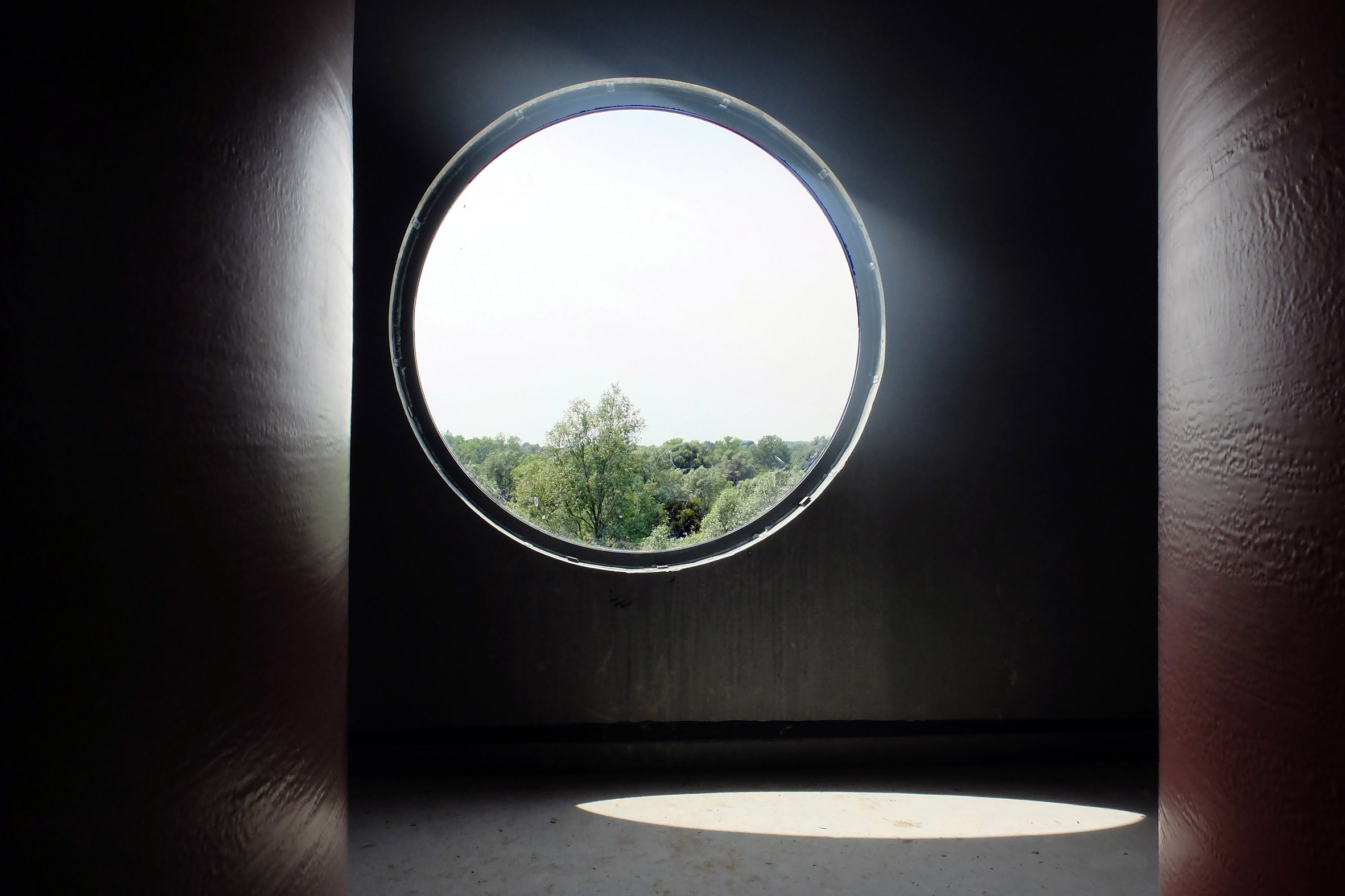 The ground floor is home to the filling line, where the food products are put into jars, stored and shipped out of the huge arch.

“Central to the plan is the gaping mouth: the access where all circulation comes together – gate storage in, quay for trucks, gate storage out and two stairs in helix,” explained Dhooge & Meganck.

“These two stairs are necessary for food safety as two types of circulation are not allowed to take place on the same staircase: one staircase for the people who circulate in the production area and a staircase for all other circulation,” the architecture studio added. 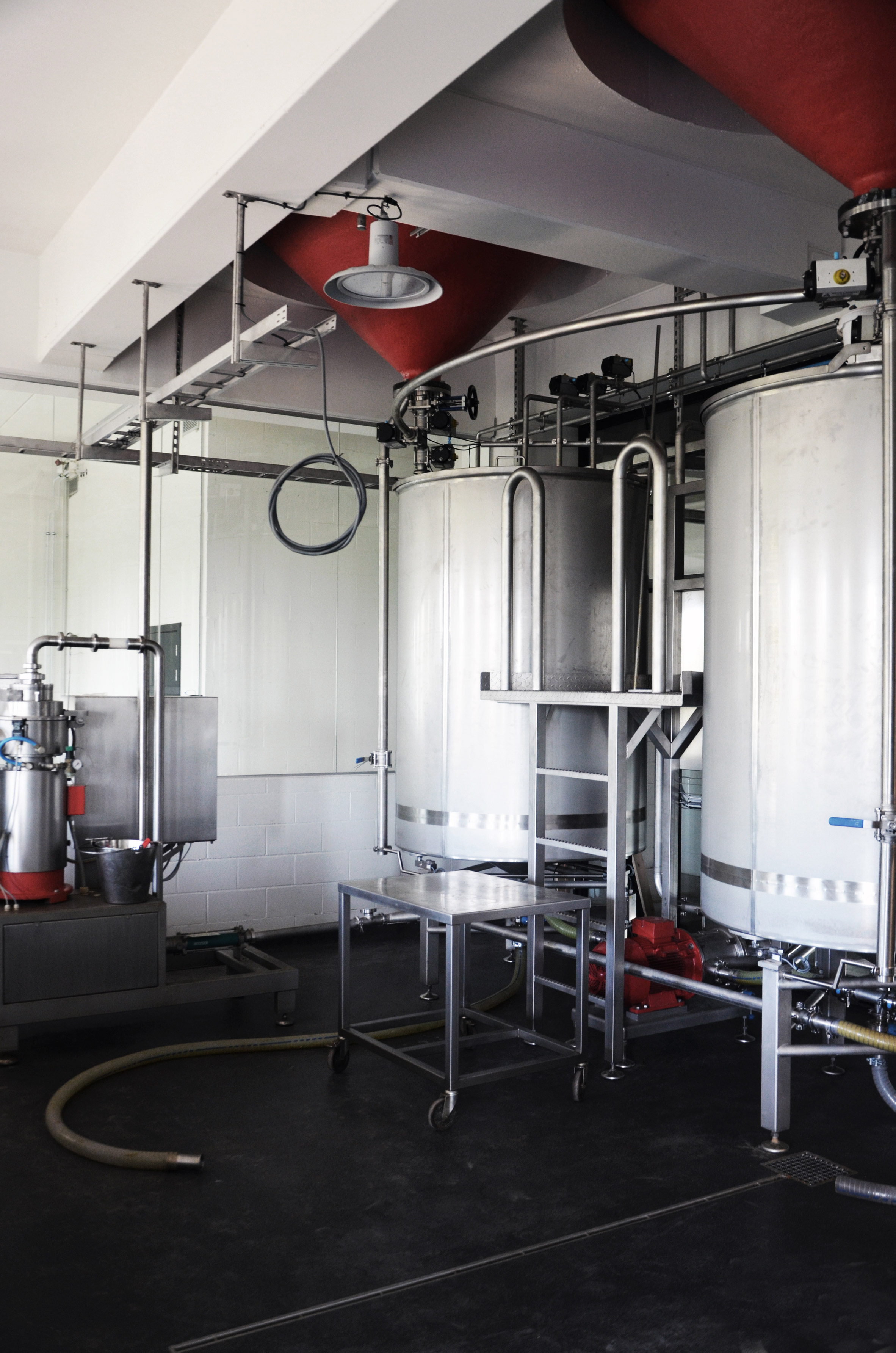 Founded in 1905, Camp’s was still being run by the Van Camp family in 2010 when a new owner, Ben Decock, proposed taking it over. The two brothers that were running the company were initially resistant to the idea.

Decock had to prove his commitment, working in the factory for months, including producing documents on a typewriter because the brothers did not trust computers. The architecture studio had to go through a similar period of familiarisation after being approached by Decock in 2013. 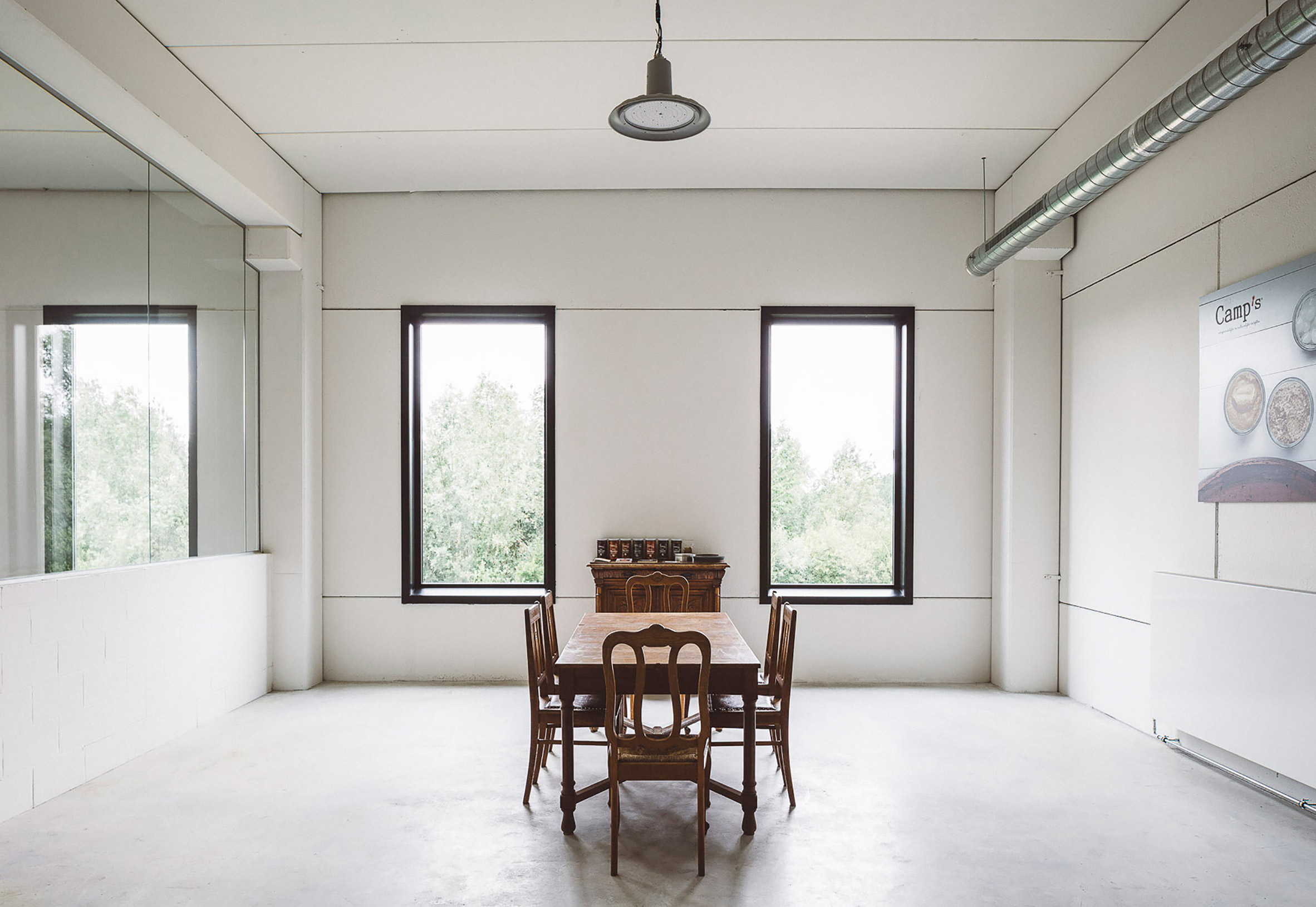 “For months we spent the whole afternoon sitting on an old chair in Camp’s unheated desk, reasoning about the place, inspiration, the meaning of a building and intrinsic passion,” Dhooge & Meganck recalled.

“Until the moment Ben had the feeling that he could fully trust us and gave us ‘carte blanche’.”

The only guideline was that the factory needed to function like a modern abbey. Belgium has a rich tradition of traditional food production in its abbeys, with its strong beers among the most famous products made this way. 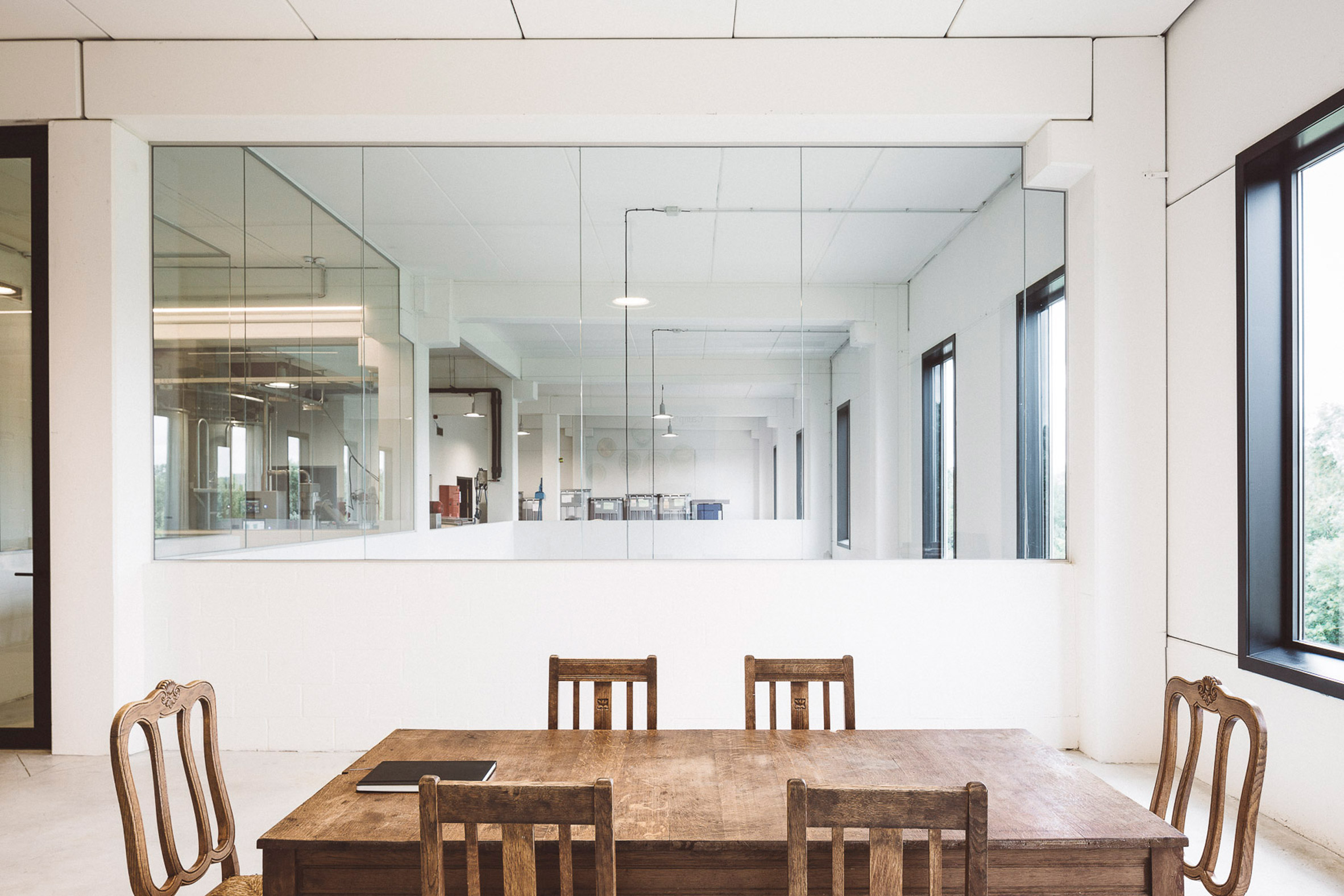 “The building crystallises our guiding principle: a functionality that has been developed and researched in such a way that a silent force is added so that what is created exceeds this functionality in feeling, experience and use – a soul,” said the architects.

The creation of a new non-standardised factory in Belgium is an unusual occurrence. Most old, purpose-built factories in the country and elsewhere in Europe are being converted into housing, offices and cultural centres as manufacturing continues to move to out-of-town sheds. Examples include the former Citroen factory in Brussels, which is being turned into a new art museum, and a cigarette factory that is now a city hall.