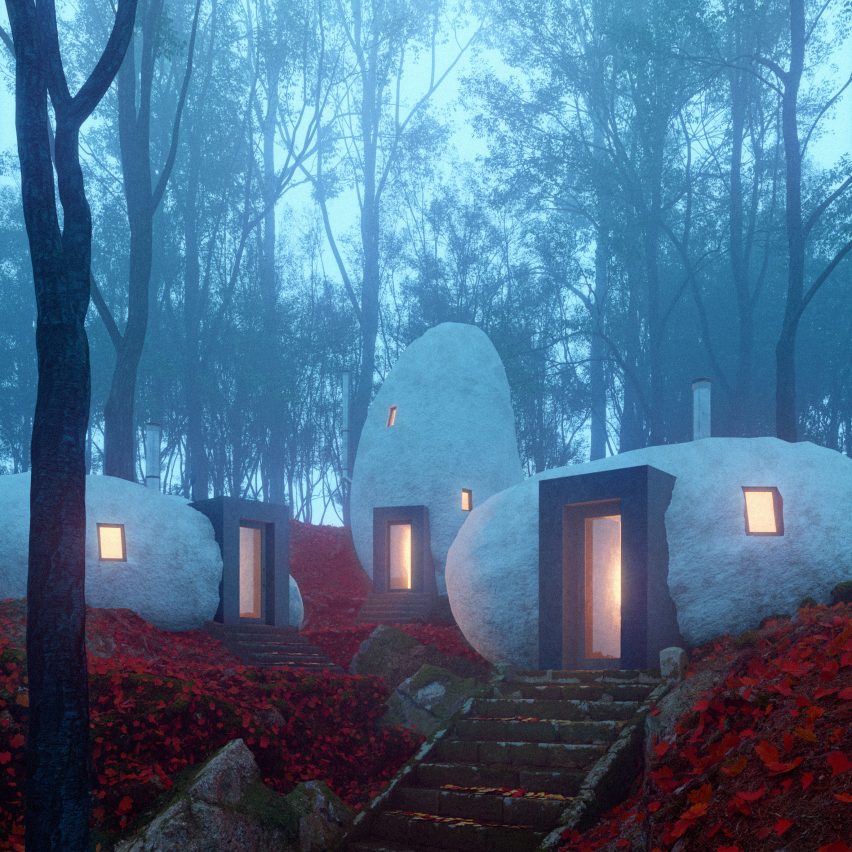 Creative duo Davit and Mary Jilavyan created the renderings of this imaginary hotel after seeing an insignificant rock feature near their Moscow home.

Dolmen Shelter would be a boutique hotel composed of guest cabins shaped like rough-hewn stones. The project is meant to be loosely evocative of dolmens – ancient megalithic structures composed of huge upright and horizontal rocks.

Although many dolmens are assumed to be tombs or burial chambers, archaeologists are largely unaware of who erected them or why.

Siblings Davit Jilavyan and Mary Jilavyan came up with the concept for the imaginary getaway after they took a walk through their housing complex in Moscow, which includes a small communal courtyard.

“Our courtyard has a landscape composition of three stones – we never paid much attention to it, but somehow we stopped walking during the day and started looking at this composition of stones and the idea of our dolmens came to our mind,” the pair told Dezeen.

“The view from our window [in Moscow] is very depressing… our personal projects are a way to escape from the dullness of our environment.”

Guests would enter their cabins via a heavy, black-framed doorway. The interior would be made to look much like the craggy inside of a cave, with surfaces rendered in a coarse, beige-coloured plaster.

Rather than standard sofas and chairs, there would be cosy seating nooks carved out of the walls and plump beanbags scattered across the floor.

“We believe that in such place people could really abstract from their current nervous lifestyles and concentrate on themselves and their inner voices…and give themselves the rest they deserve,” the pair added.

The Jivyans also decided that the cabins would only have a couple of tiny windows, claiming they are “tired of modern house projects which look like an aquarium with four sides of glass”.

Light would instead come from a wood burner and tiny lamps fitted in a series of alcoves. The exterior of the cabins would also be fitted with “ominous” red lights that glow at night, a feature that Davit and Mary Jilavyan hope will nod to the mystery surrounding dolmens and their origin.

Dolmen Shelter hotel isn’t the only destination dreamed up by Davit and Mary Jilavyan. Earlier this year, they revealed renderings of Sonora Art Village – a fictitious residential community that would be situated on a sun-scorched site in Mexico, populated by a medley of orange, yellow, green and hot-pink houses.

The creative duo had been spurred on to envision the brightly hued village after being stuck inside during the global coronavirus lockdown.

“We wanted to create a place where people can come and feel for a while in a completely different place, far from the grey reality.”