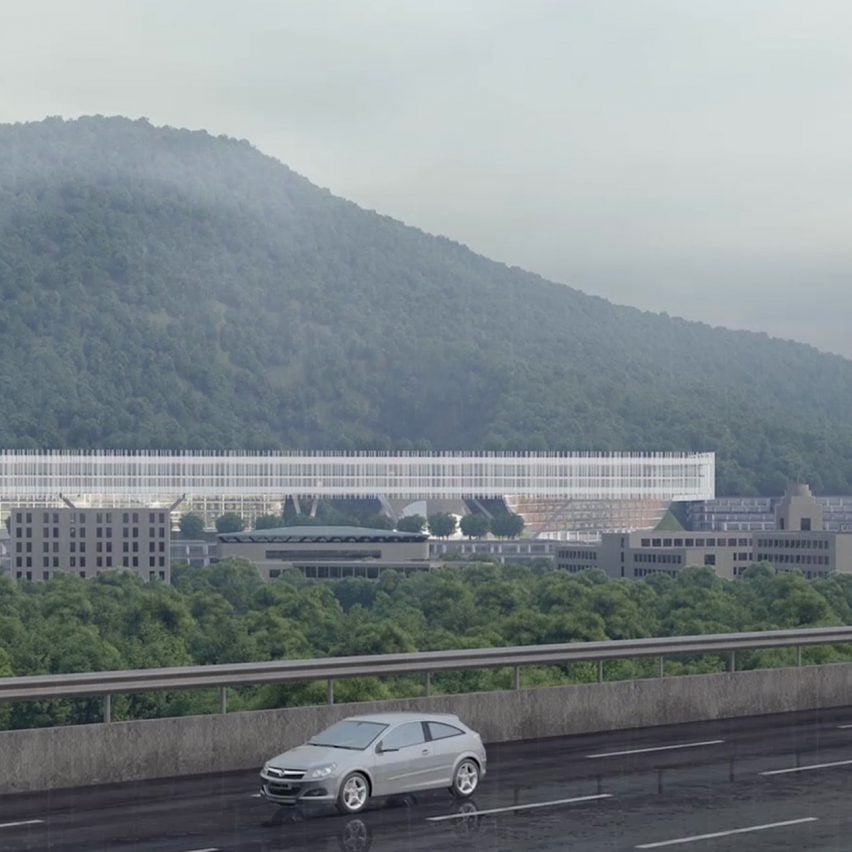 French studio Dominique Perrault Architecture and local architect Zhubo Design are set to design a university campus with a 700-metre-long building for the Shenzhen Institute of Design and Innovation.

Set to be built in a valley at the base of  Phoenix Mountain, Dominique Perrault Architects and Zhubo Design‘s campus will contain academic buildings, public squares, gardens, sheltered promenades as well as student and teacher housing.

The 300,000 square-metre campus for the Shenzhen Institute of Design and Innovation aims to become a local landmark and will feature a 700-metre linear building.

Wrapped in vertical bars, the building will protrude from the base of the mountain and be raised above the ground on a series of columns.

“The project is integrated into the landscape, and preserves the legibility of its horizontal structure, ensuring that no prominent architectural element would disturb this plateau geography,” said Dominique Perrault Architects.

“Hung above the ground, the main volume maintains visual transparency at pedestrian level, and its compact height guarantees views towards the great landscape.”

The main building, or “hyper-roof”, will carry the academic functions of the building, while the area below, or “hyper-ground”, will house public spaces and services.

The elevated academic building will contain two levels of laboratories and teaching rooms that are dispersed between large square-shaped circulation cores that connect the roof with the ground level.

A second promenade will be built on the roof which will have garden spaces, terraces and sports courts. The green roof will provide the building with insulation as well as means for collecting and harvesting rainwater.

The new Shenzhen Institute of Design and Innovation campus will exist as part of the Southern University of Science and Technology and will accommodate around 4,000 students.

The university campus is part of a wider masterplan named the Shenzhen Ten Cultural Facilities of New Era, which will see 10 cultural buildings constructed in the city.

Across the city, EMBT has unveiled its plans to build a music conservatory wrapped in decorative louvres, Zaha Hadid Architects has designed a pebble-shaped science museum, while Jean Nouvel, and MAD and ECADI have also designed buildings that will form the cultural masterplan.