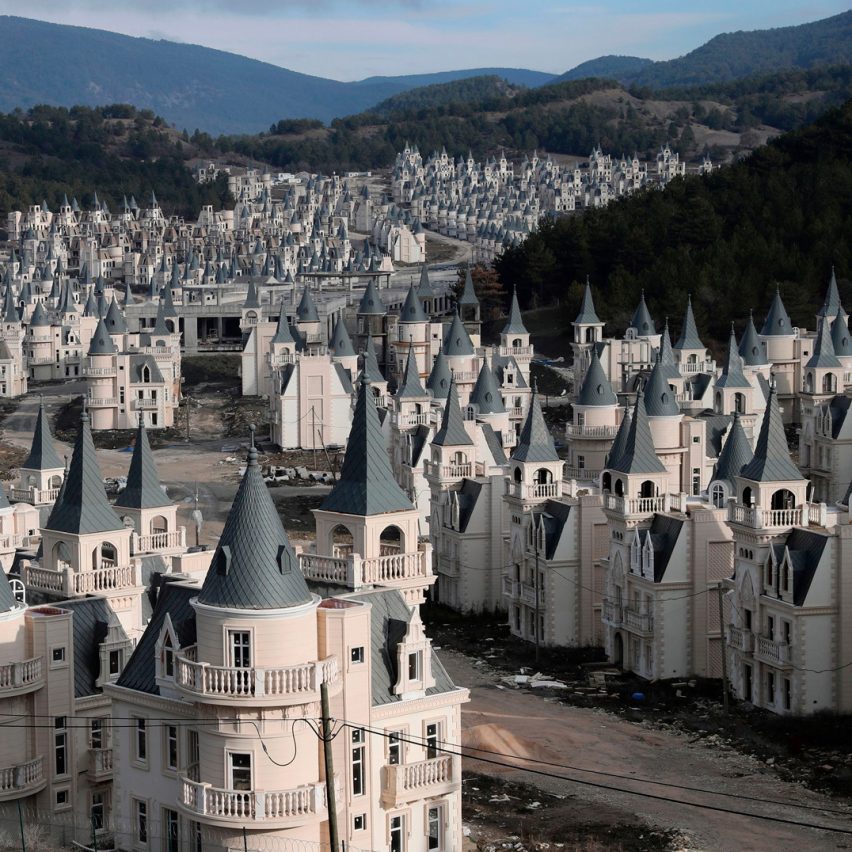 Hundreds of chateaux have been abandoned at the Burj Al Babas luxury housing development in central Turkey after its developer filed for bankruptcy, as shown in this drone footage.

Approximately halfway between Turkey’s largest city Istanbul and its capital Ankara, the Burj Al Babas development will contain 732 identical mini chateaux when, or if, it completes.

Begun in 2014, the hundreds of houses have been left in various states of completion since the dramatic collapse of the Turkish economy led to developer Sarot Group to file for bankruptcy in November. The complex has debts of $27 million, reports Bloomberg.

Each of the houses are identical, with the developer controlling the external appearance and buyers allowed to customise the internal layout.

Identical houses all in style of mini French chateaux

The houses, which are being built in the style of mini French chateaux, are all three storeys tall with a round corner turret and a square tower above their entrances.

They are closely arranged on 324-square-metre plots on a rural site near the town of Mudurnu, as can bee seen in the footage.

At the centre of the development a large classical domed building is also under construction. This building is intended to be the communal centre of the complex and will contain shops, cinemas, restaurants, conference halls, small meeting rooms, and a nursery.

It is also planned to house fitness facilities and include a Turkish baths, saunas, steam rooms, and an aqua park, while basketball courts, tennis courts, and football pitches would be built alongside it.

Although construction has halted at the site Mezher Yerdelen, Sarot Group’s deputy chairman, told Bloomberg that he is hopeful that the development will continue.

“The project is valued at $200 million,” said Yerdelen. “We only need to sell 100 villas to pay off our debt. I believe we can get over this crisis in four to five months and partially inaugurate the project in 2019.”