We round up eight of Christo and the late Jeanne-Claude’s most arresting temporary art interventions from the past 50 years, as their first major UK sculpture is unveiled.

The art duo are famous for their large scale pieces that involve wrapping landmark buildings and landscapes in huge amounts of fabric, or creating temporary structures from colourful oil barrels.

Despite the best efforts of critics to ascribe specific meaning to their work, the artists always insisted that their pieces are simply about experiencing the artwork in the moment, in the context of its environment.

By 1961 they were collaborating on art works, in a romantic and artistic union that lasted until Jeanne-Claude’s death in 2009. When she was still alive, the married couple were always careful to travel in separate planes so that if one were to perish in a crash the other would be able to continue their work.

Fiercely determined to retain complete artistic freedom, the pair self-funded their installations by selling original artworks and insisting on paying their assistants union or above minimum wages. After a work is complete, all the materials are recycled and the location returned to its original state.

Their work defies categorisation, blending art, architecture and sculpture. Read on for our round up of seven of their most important realised works and one yet-to-be-built project:

For one of their first works together, Christo and Jeanne-Claude blockaded one of Paris’ narrowest streets with a wall of 89 found metal oil barrels in a protest against the Berlin Wall, which had just been built.

Europe was unstable and tensions were running high in the city, with the violence of the Algerian War of Independence and the Paris massacre of 1961, where the police had attacked and killed demonstrators.

Called The Iron Curtain, it temporarily transformed the street into a dead end. The illegal art barricade remained in place for eight hours, blocking traffic. The artists had been refused permission for the project and continued regardless, until the police demanded they remove it.

For ten weeks in the October of 1969, 1.5 miles of Australian coastline was wrapped in 92,900 square metres of erosion-control fabric, lashed to the cliffs with 35 miles of polypropylene rope.

A team of 15 professional mountain climbers and 110 workers were lead by a retired major from the Army Corps of Engineers worked for four weeks to wrap the coastline.

This time the pair had permission from Prince Henry Hospital to undertake the project, although the team were hampered by a storm that ripped off some of the fabric midway through the wrapping process.

For 28 months Christo and Jeanne-Claude worked with designers, builders, and students to create a partition of orange fabric hung between two mountains in Colorado, in a piece called Valley Curtain.

It was 381 metres long and suspended at a height of 111 metres. Keeping the curtain in place necessitated 417 metres of cable, weighing 61 tons and anchored to 864 tons of concrete foundations.

The last ropes were secured at 11 am on 10 August 1972, and the billowing screen of woven nylon remained in situ for 28 hours until high winds forced it to be taken down.

Using 603,870 square meters of luminous pink fabric selected to compliment the shallow waters and Miami skies, the artists surrounded a series of islands in Biscayne Bay.

Having obtained permission from government agencies, they and created floating rafts of fabric attached to octagonal, pink-painted booms that were towed into place, unfurled and anchored in place.

For the two weeks that Surrounded Islands were on display 120 people in inflatable boats monitored the work. When it was removed the location was in better condition than when they started, thanks to the team removing some 40 tons of rubbish that had washed up on the islands or was floating around it.

In 2005 the art duo installed 7,503 fabric panels suspended from saffron-coloured steel gateways built along 23 miles of walkways through New York City’s Central Park. Teams of 600 workers in special uniforms were paid to install the gates, with a further 300 employed to monitor and later remove the work.

The rectangular gates were designed to mirror the city’s grid pattern, and the rippling saffron fabric designed to move in the breeze, reflecting the movement in the bare trees and casting golden shadows on visitors who walked through them.

Although Jeanne-Claude passed away in 2009, Christo continued with their life’s work and realised a project the couple had first dreamed up in 1970. It was his first work since they had created The Gates and the death of his wife.

For 16 days in the summer of 2016 an iridescent carpet of yellow fabric suspended on floating docks stretched for three kilometres across a lake in Italy. Completely free to experience, as always, visitors could walk from the shore to several islands or climb the mountainsides to see the golden walkways spreading out below. 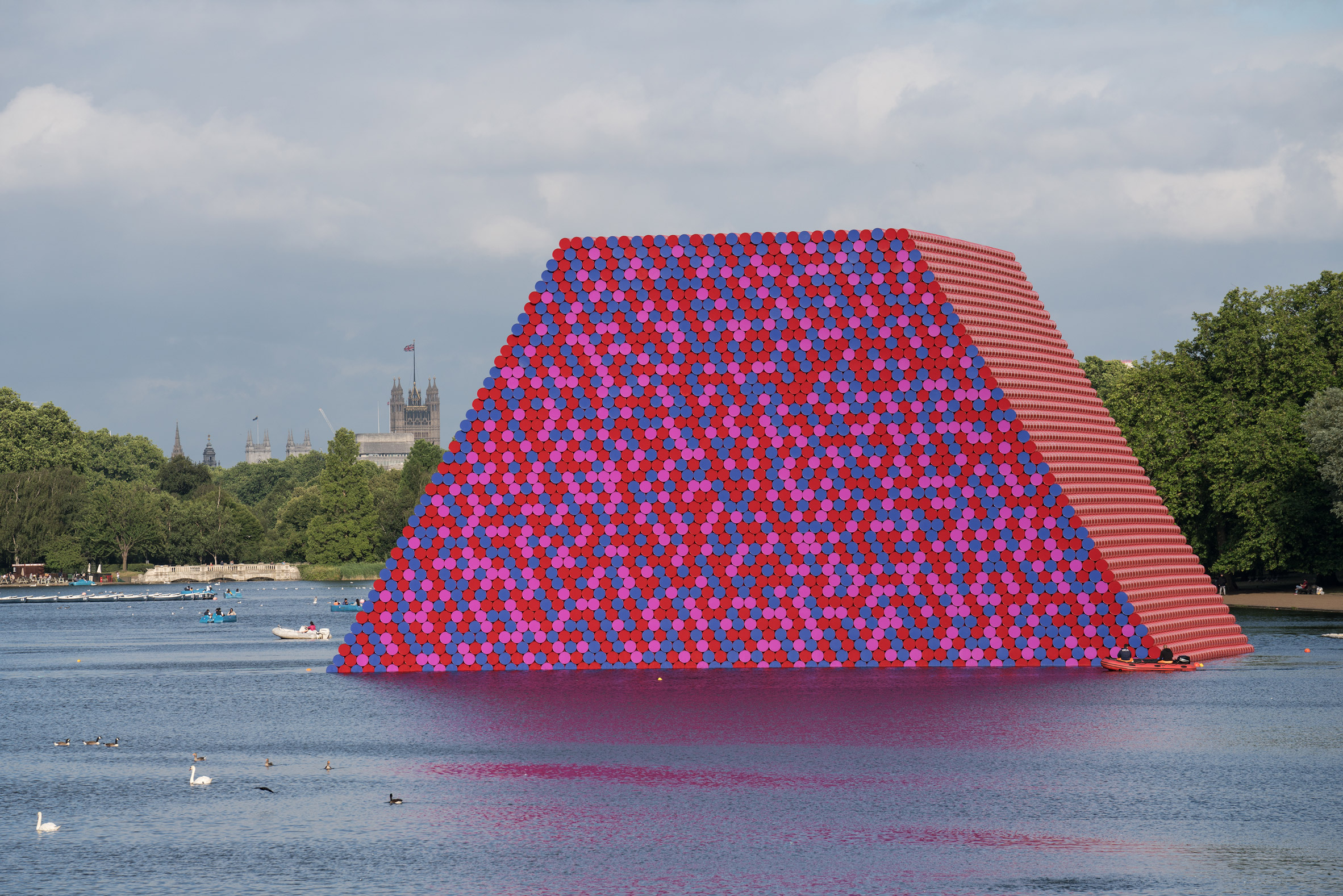 The artist and his late wife have been fascinated by trapezoid form of mastaba, found in the architecture of benches in Mesopotamian era and in the tombs of ancient Egyptian kings. They had originally planned to float one on Late Michigan back in 1967.

In his first major work in the UK, Christo created a floating structure of 7,506 specially made barrels fixed to a scaffold anchored to the bottom of the Serpentine Lake. Painted in shades of red, blue and mauve, The London Mastaba recalls Impressionist art as its reflection distorts in the water disturbed by the splashing of waterfowl, pedalo boats and outdoor swimmers.

Scale model of  The Mastaba for Abu Dhabi, unbuilt

At the venerable age of 83, Christo is still stubbornly determined to realise one of his and Jeanne-Claude’s most ambitious projects: a 150-metre-high mastaba in the desert in Abu Dhabi.

The pair began scouting potential locations back in 1977 and if built, it would be the largest sculpture in the world. It would require 410,000 barrels, which Christo plans to have painted in eight different colours to form a shimmering mosaic reminiscent of those found in Islamic architecture.

It would be Christo and Jeanne-Claude’s only permanent piece of work.