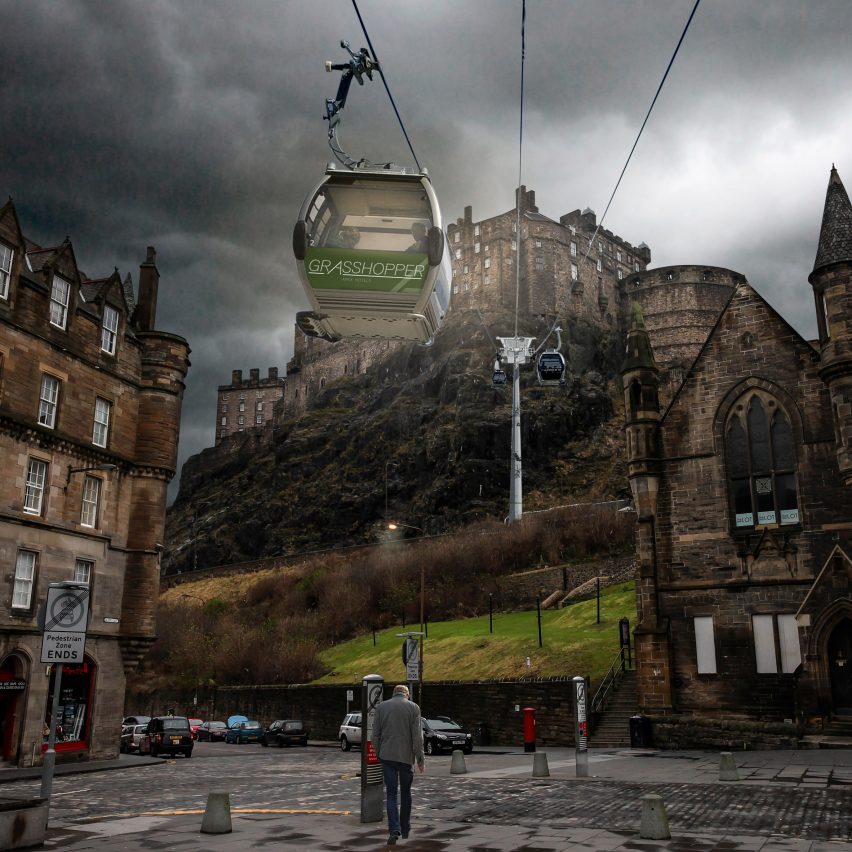 Did we fool you with our spoof story today? Here are today’s best architecture and design April fools including plans for a gondola in Edinburgh, a dog walking drone and Swiss Army sunglasses.

Every year on the first of April people traditionally play tricks on each other, and the media loves to get involved. Here are eight of the best stories from around the internet this April Fools’ Day.

Stock photo stalwart Shutterstock announced it was poised to put the Great Library of Alexandra to shame by building a brick and mortar library to house a hard copy of every one of its 250 million pictures and videos.

Shutterstock estimated its library, designed by world-renowned Belgian architect Alexandria VonPixel would be the largest in the world. Instead of librarians, the catalogue would be managed by an army of AI-powered robots called Cyanotypes.

It is the latest accessory for the busy dog owner: a drone that walks your pet https://t.co/qun24CUESI

Drones that can take your dog for a walk

The Times reported that a £200 drone had been released that can walk your dog. Called the Drone Dog Walker, the newspaper claimed the drone came with “leash control technology” to keep a firm robot-hand on unruly labradors, but warned that smaller breeds could end up literally getting carried away.

An advanced version of the drone would freeze dry your dog’s poop and scoop it into a bag.

Edinburgh gets its own arial gondola to ease congestion

Scottish architecture practice ISA revealed plans to build a gondola route through Edinburgh. Called the Apex Grasshopper, the cable car would stretch from a hotel to the historic Edinburgh Castle.

ISA promised the new transport system would help ease congestion and allow visitors with only a short time in the city to make the most of their stay.

Royal Mint has unveiled its latest coin collection – based on the emojis https://t.co/Cc4X7wX7MH pic.twitter.com/Uu3JV4JpkF

UK tabloid newspaper The Sun announced that the Royal Mint was releasing a special edition 50p coin emblazoned with the poop emoji.

Also set to go into circulation were coins embossed with other emojis that have somewhat-rude connotations, including aubergines and peaches.

As part of a fake study with the fictional “University of Cornwall” the chair-makers promised the pink and fluffy fabric would bring the owner a wealth of wellness benefits.

We’re delighted to announce ChipLead. Get one of our 10,001 cards today

FinTech startup unveils a debit card made of lead

Chip, a FinTech startup that allows users to automatically save money digitally via an app, promised users it was bringing out a physical bank card made of lead.

Weighing in 33 times heavier than your average card, ChipLead promised to help users feel important, work on their biceps, and even slow down a would-be thief.

Are you as excited as we are about our new collaboration? Click this link for more info and to pre-order the Survival Rx glasses: https://t.co/x4TpTJ5iWa#GlassesUSA #SurvivalGlasses #MyVictorinox pic.twitter.com/hZL1lFWzSo

Glasses USA announced a tongue-in-cheek partnership with Victorianox Swiss Army, showing off the design for a pair of spectacles with tools that flick out of the frame.

The glasses would come equipped with everything from a corkscrew to a knife, reported High Snobriety.

Did you fall for our fool? We made up a spoof announcement that Norman Foster designed a tower to rival the proposed The Tulip viewpoint in London.

Called The Unicorn, we imagined a 307-metre spire with office spaces and sleeping pods for hard-pressed urban millennials to rent, wrapped with a helter-skelter slide.

The post Eight of the best April Fools’ Day pranks from architecture and design appeared first on Dezeen.