For a site just outside of San Francisco, American studio Faulkner Architects has created a family residence clad in Corten steel panels and shaded by large oak trees. 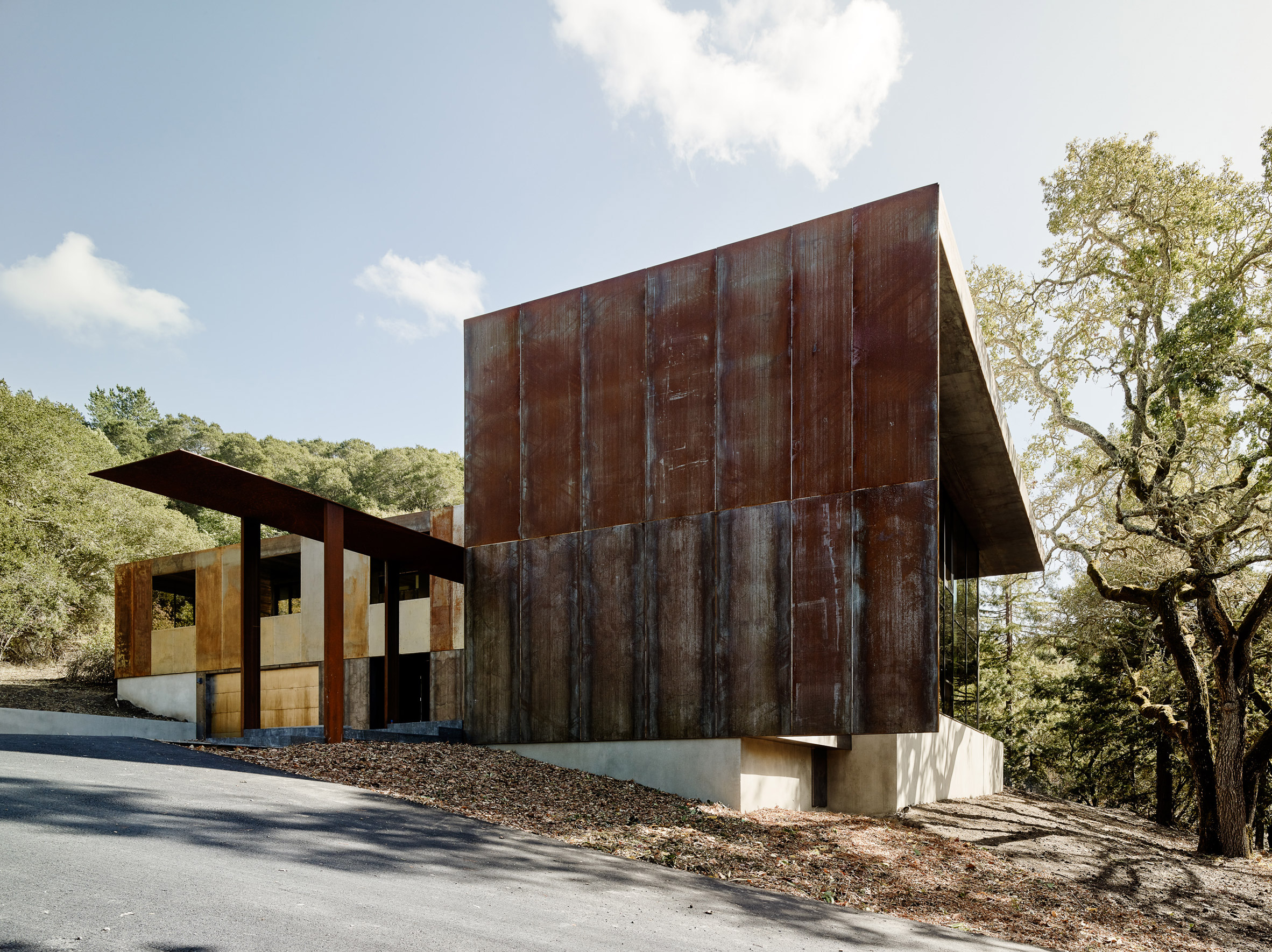 The residence, called Miner Road, is located in the town of Orinda, on a gently sloping site at the base of the Oakland Hills. The property encompasses nearly eight acres (three hectares), and is blanketed with rich green foliage and native oak trees. 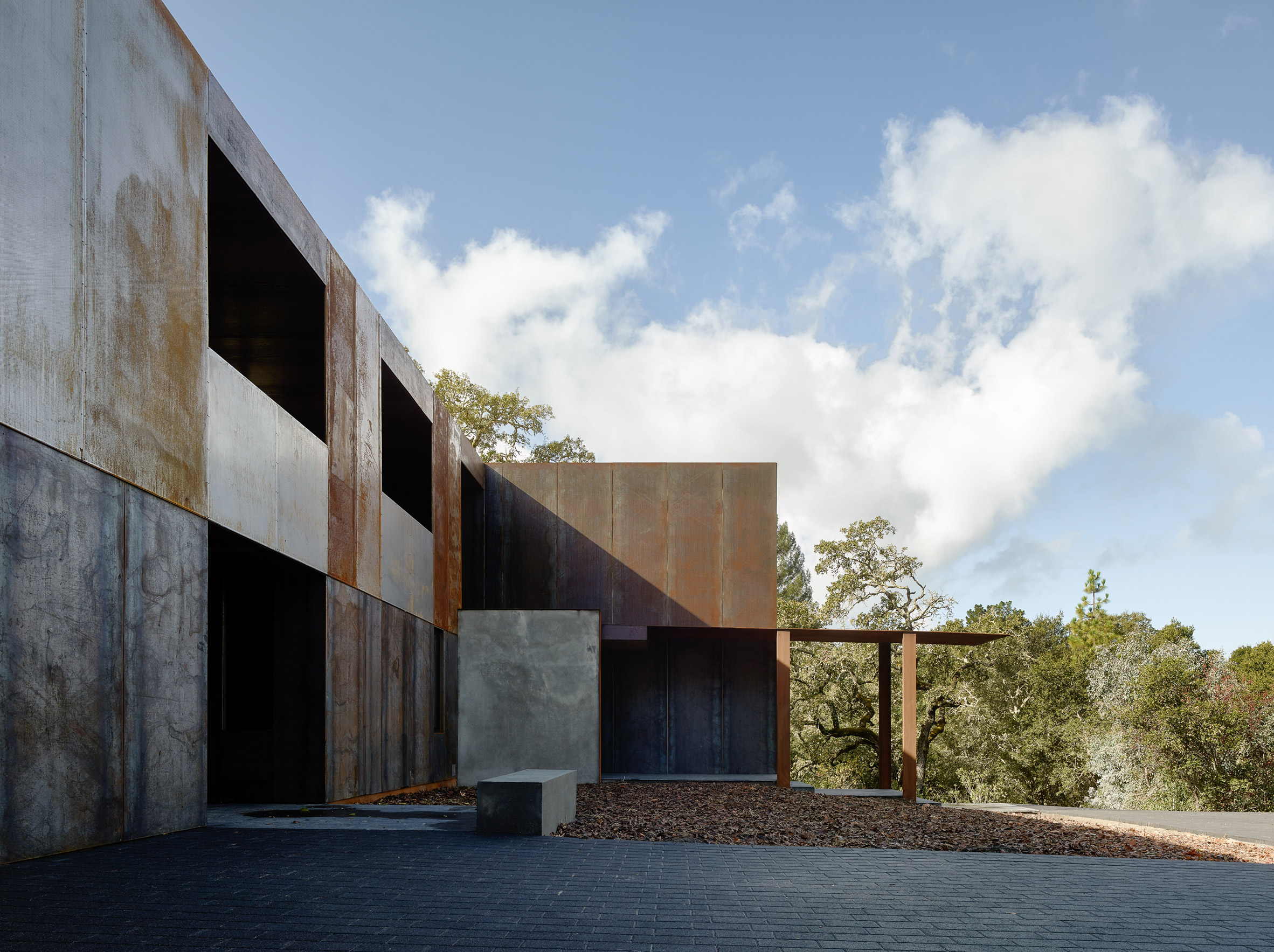 The three-bedroom home was designed for a couple with two young sons, who wanted a distinctive home imbued with an environmental ethic.

“They wanted to construct a house that was deeply ecologically site-specific, energy-efficient, and had a strong design identity,” said Faulkner Architects, a studio based in Truckee, California. 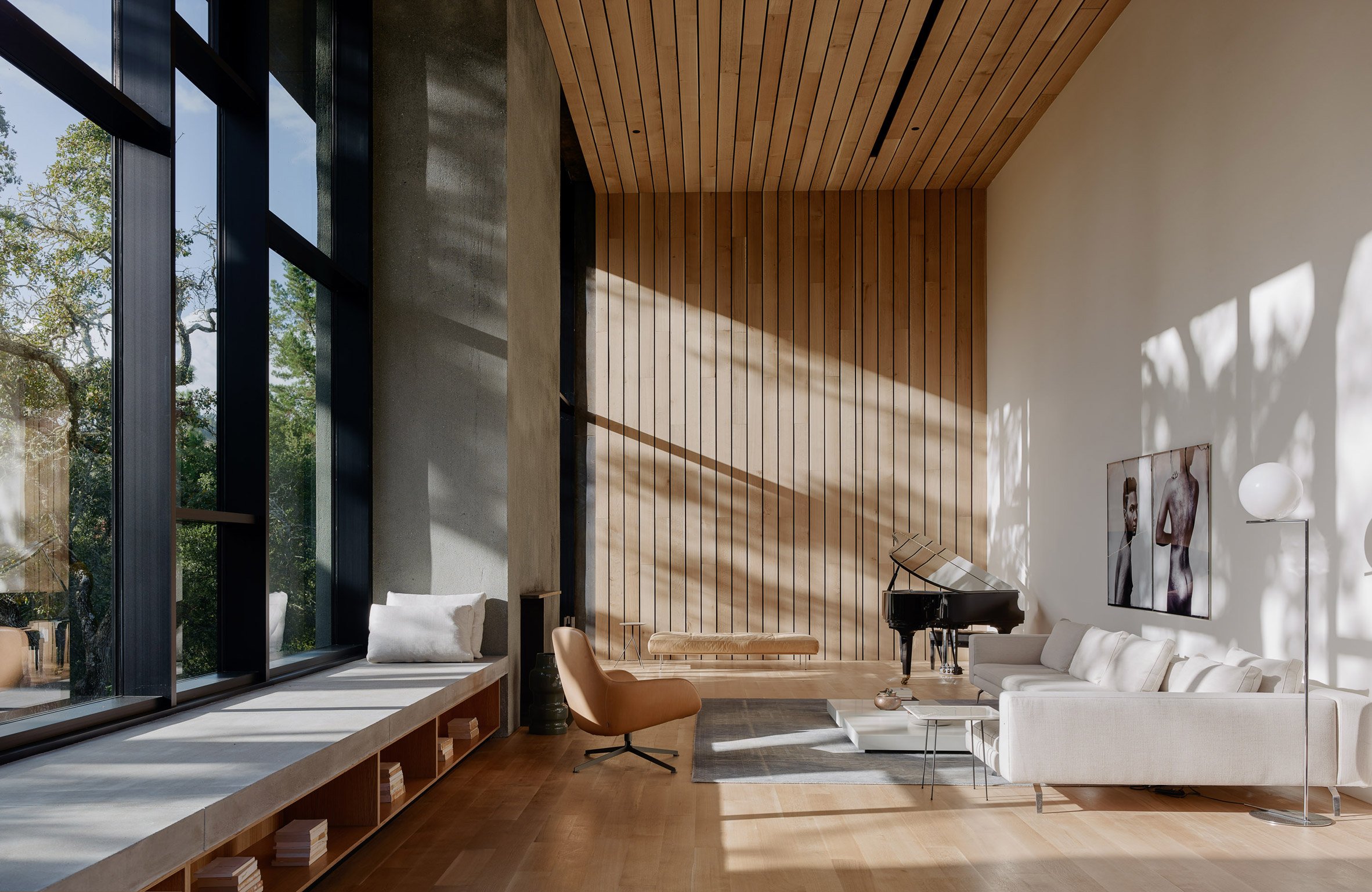 To inform the design, the team drew from a “dense observation of the landscape, climate, culture, and existing uses and patterns of the site”. The footprint of the new residence was influenced by an ageing house that once stood on the property. The team retained a large fireplace from the old dwelling, which was wrapped in concrete and serves as a major structural element and visual anchor. 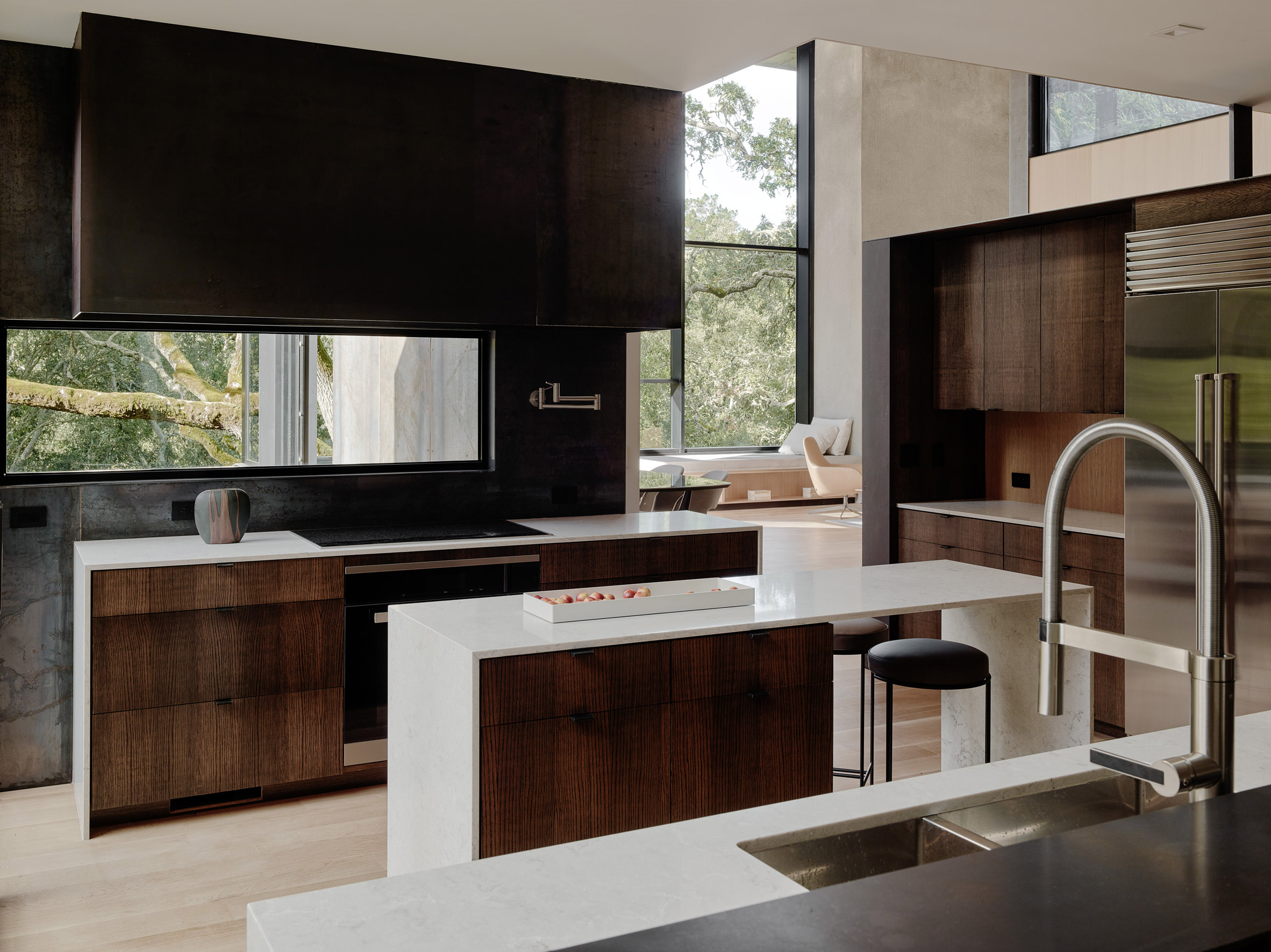 The hillside was left open and natural. The home is shaded by mature oak trees, which were integral to the design.

“Those big trees felt like refuge before we even built anything,” said architect Greg Faulkner. “They’re a free material that became part of the house.” 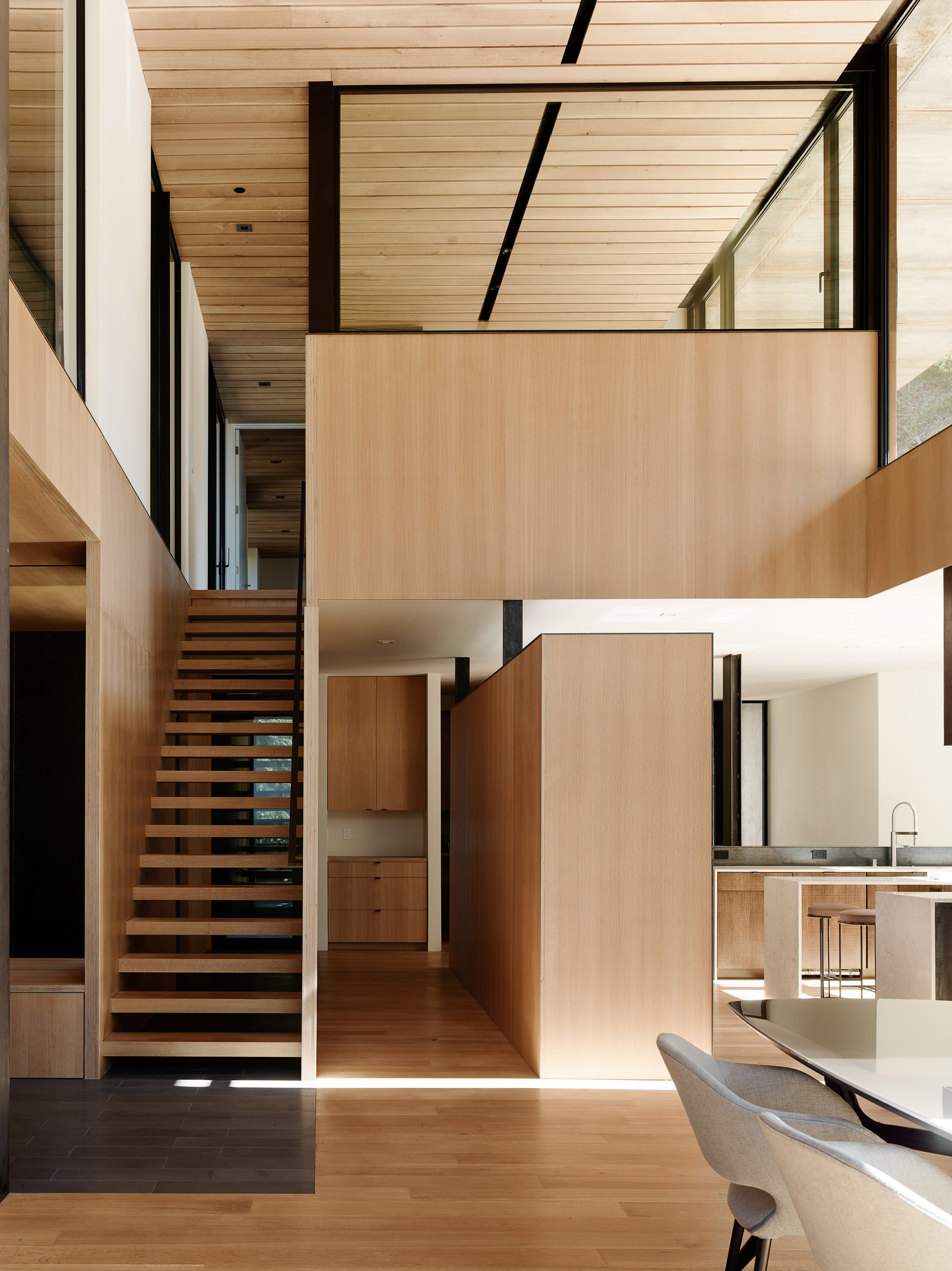 The architect sheathed exterior walls in a Corten steel – a brand of weathering steel that is low-maintenance, but also will “refresh every time it rains, just like the landscape”, the architect said. Cutouts in the metal screen enable views outward, while also ushering in natural light. 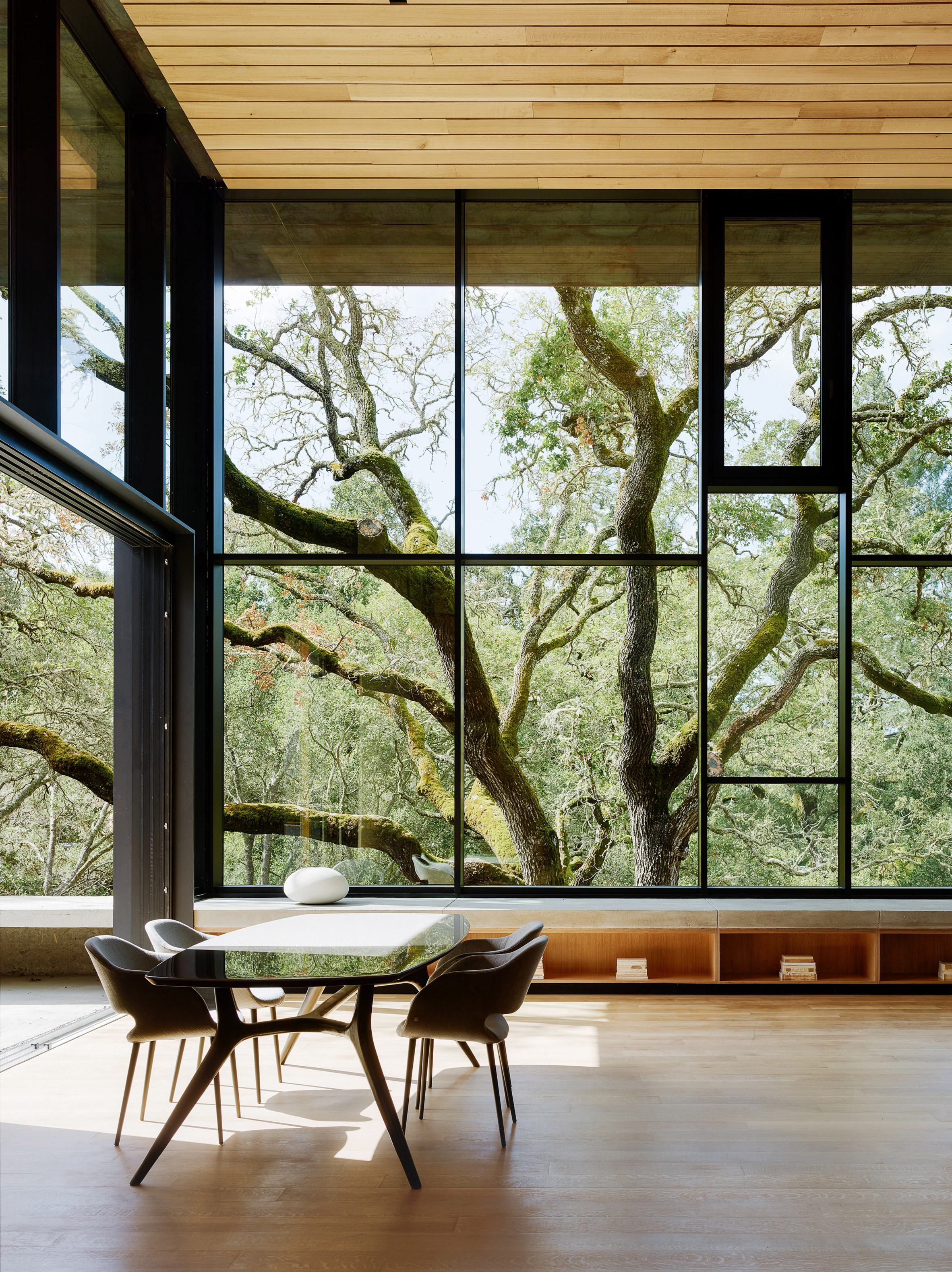 The home is entered from the north, where a covered walkway leads to the front door. Inside, one finds light-filled rooms with high ceilings and views of the landscape.

Providing a strong connection to the outdoors was a guiding concern for the architect. In the main living area, a 12-foot-wide (3.6-metre) retractable glass wall opens onto a patio and garden. 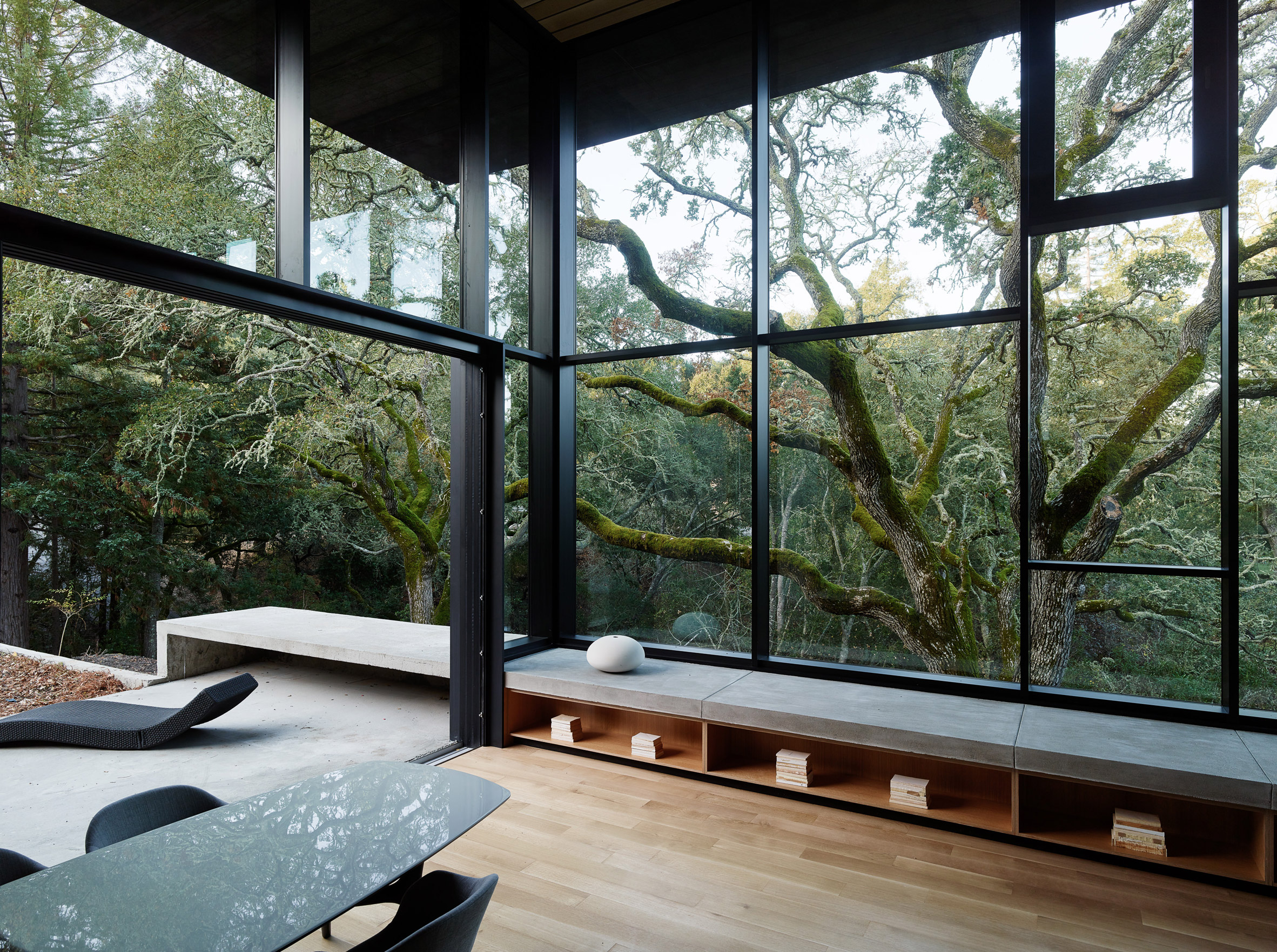 “This bridging between interior and exterior is major feature of the main living space, and an entire wall is devoted to connecting the two visually,” the studio said.

The second storey features a long outdoor “pacing deck”, which runs alongside an interior workspace. The wooden deck, which overlooks the front of the property, is lined with perforated metal screens and rectangular openings. 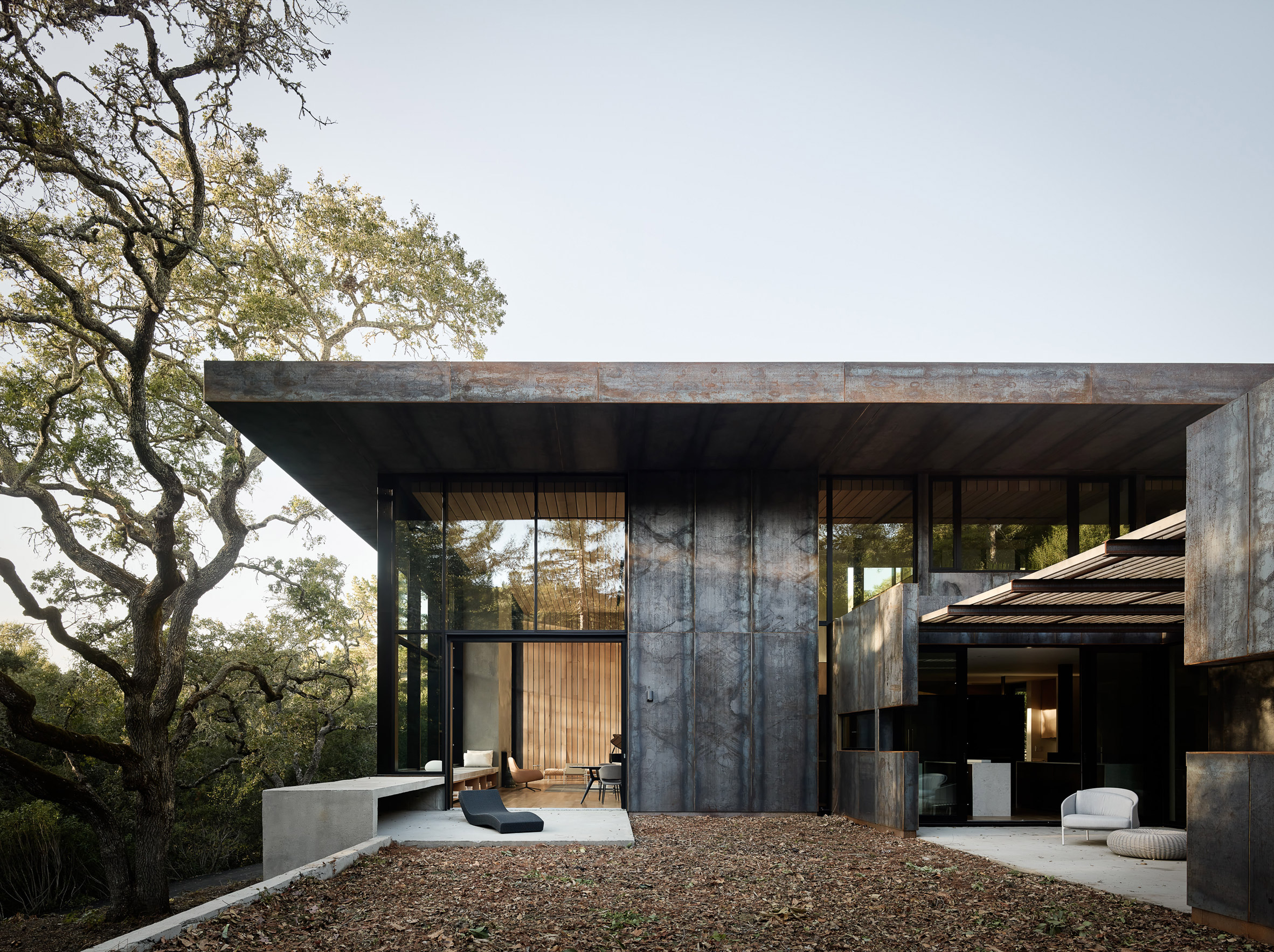 The home features a material palette that is at once minimal and earthy. White gypsum walls are paired with basalt floor tiles and weathering steel accents. In many areas, white oak was used for walls, ceilings and floors – with the wooden boards arranged in a very specific manner. “The rhythm of the interior boards was conceived as a controlled representation of tree growth,” the studio said. 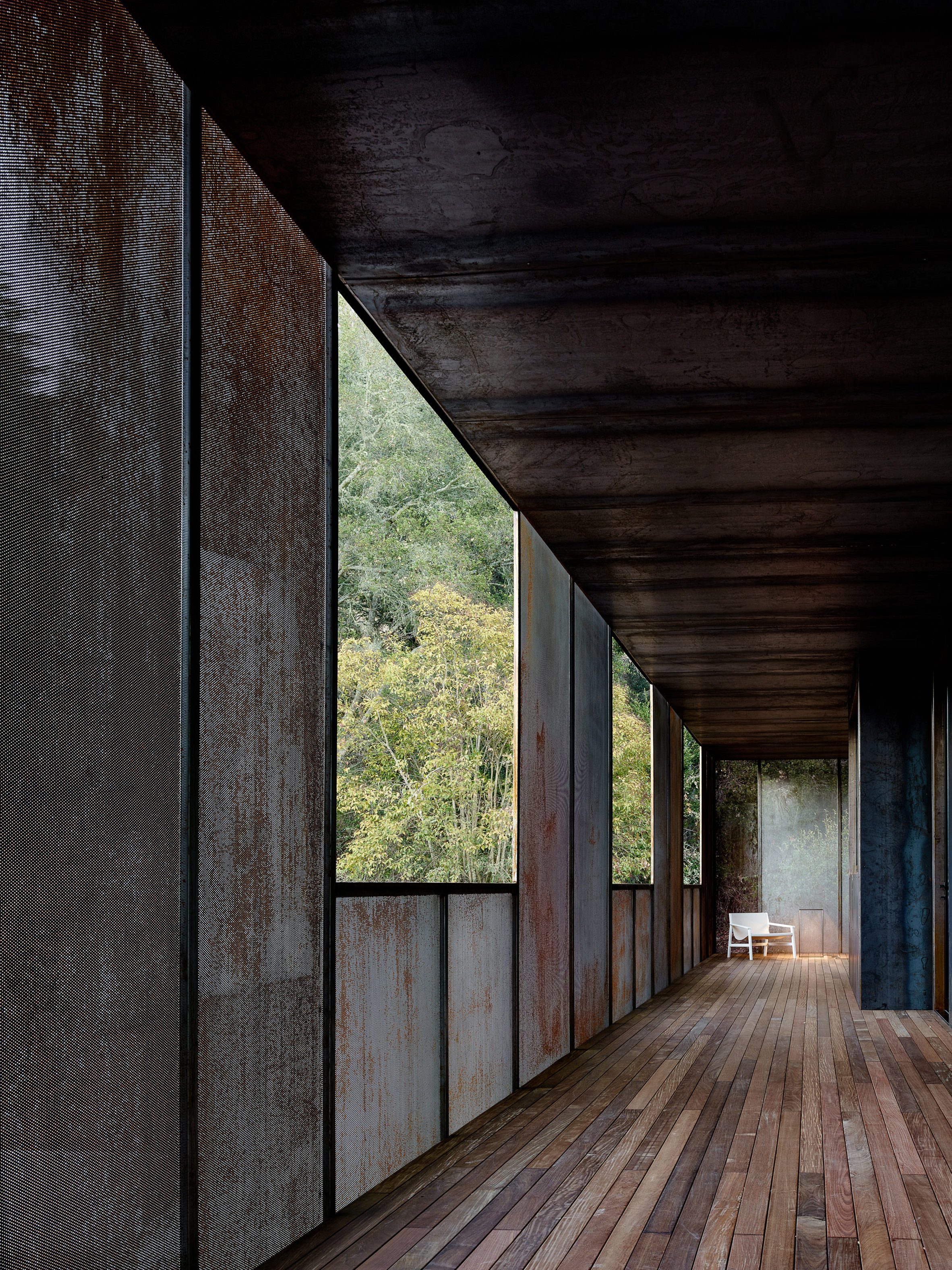 The residence has a number of sustainable features, including a rainwater collection system, photovoltaic panels, and various devices for reducing energy consumption.

“All in all, the mechanical and electrical systems were designed at a 44.9% improvement over code, which results in lowered ongoing operational costs and a measurable environmental impact,” said the studio. 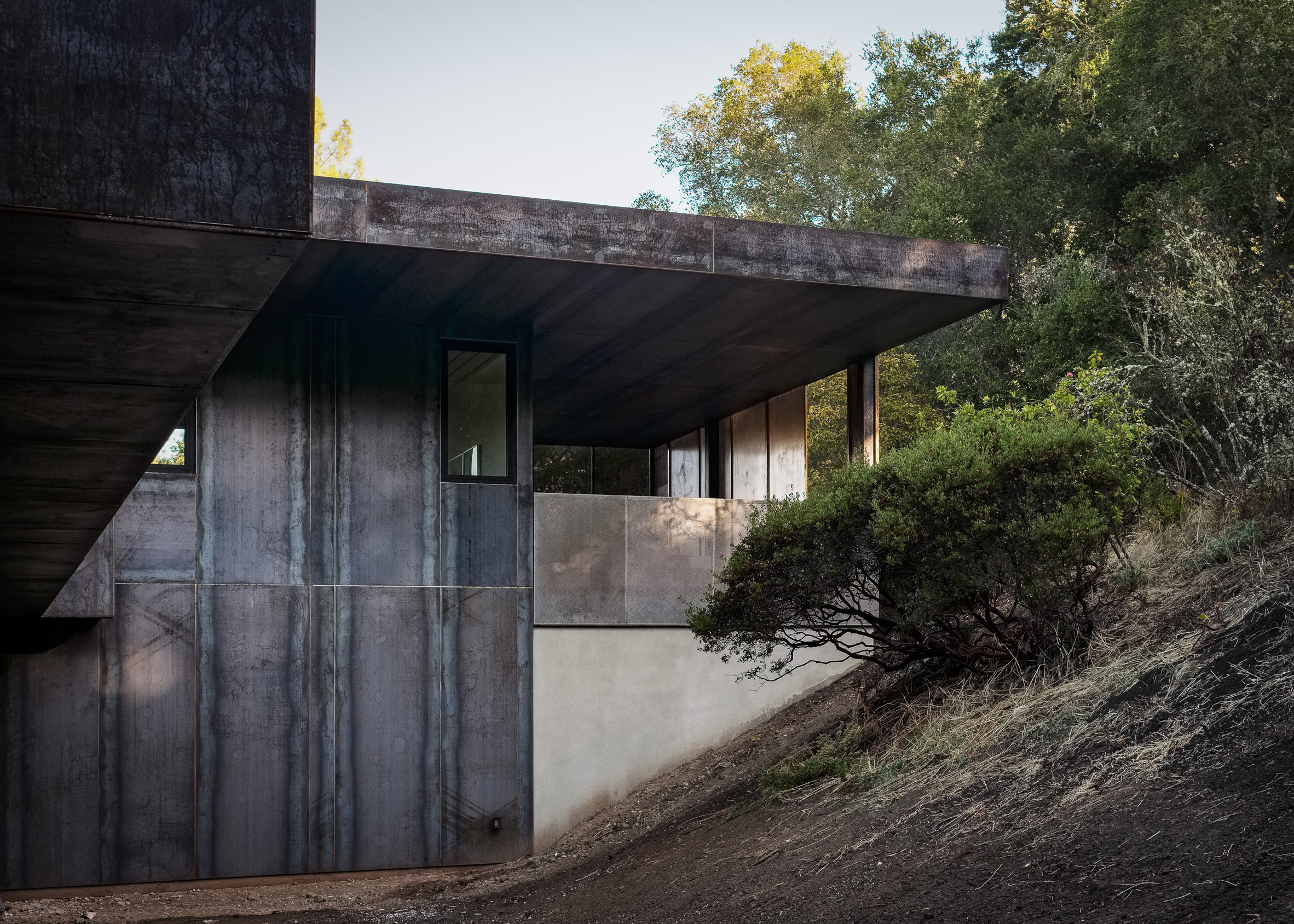 The home recently won a design award from the California chapter of the AIA. Other winners included the Alamo Square Residence by Jensen Architects, which involved updating a historic Victorian residence in San Francisco. 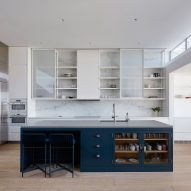