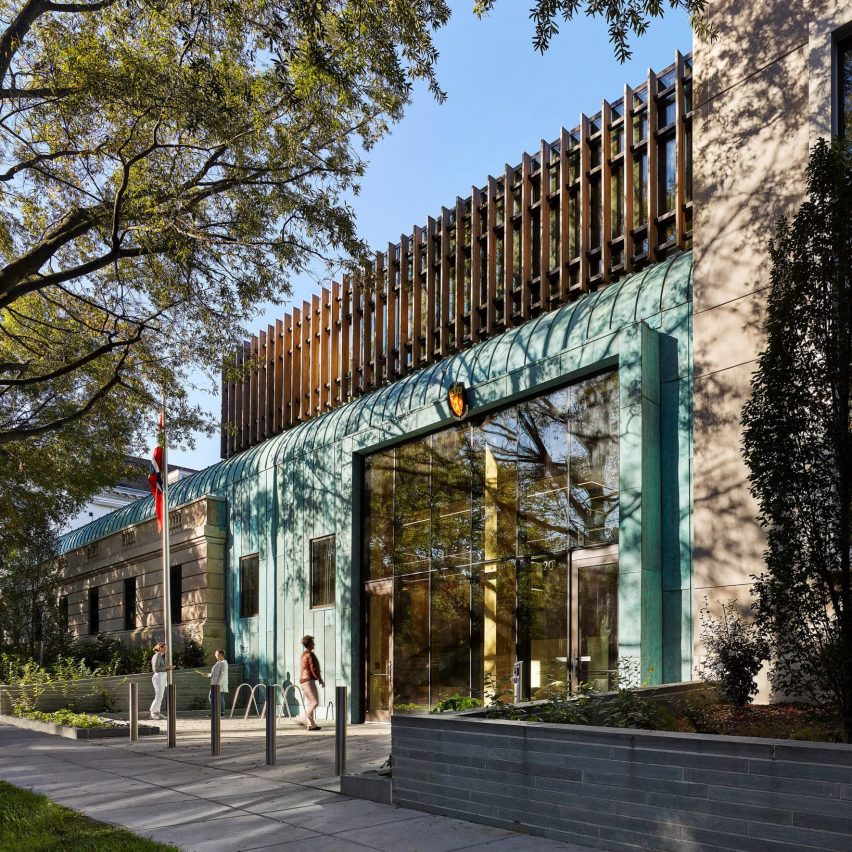 US studio Fentress Architects used copper and mass timber to reconfigure Norway’s embassy in Washington DC, which opened to the public this month.

The project entailed a thorough renovation of Norway’s existing embassy, originally built in 1977.

In addition to remodelling the building’s 30,000 square feet (2,787 square metres) of interior space, Fentress also added a 3,500-square-foot (325-square-metre) extension to the compound.

“While providing significant functional, accessibility and sustainability upgrades, our architecture makes Norway’s rich heritage visible on one of the most culturally significant streets in the world,” said Steve White, the director of Fentress Architects’ Washington DC Office.

Previously, the lobby had been elevated above street level, rendering it inaccessible.

The existing Chancery building, which hosts the embassy’s offices, was renovated to provide flexible layouts, better natural light, and informal spaces for the embassy’s 60 staffers to gather.

“While the vast majority of the existing structure and limestone cladding were retained and restored, strategic interventions were made to the stone facade in order to open up new views of the garden and public street, block undesired views from neighbors, and introduce generous daylight within,” said Fentress Architects.

One of these spaces is dubbed the “Social Hub”, a double-height space overlooking the embassy’s courtyard, which is lit by a full-height glass wall that Fentress designed.

“A two-story space, known as the ‘Social Hub,’ is connected by an open stair and functions as a venue for staff to engage in intellectual dialogue and build community,” said the architects. 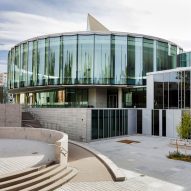 “Smaller, multi-use spaces are distributed throughout both office wings. Flex spaces such as these, along with open office layouts, more easily accommodate future needs,” they added.

A new wing by Fentress connects the existing buildings on the compound and opens onto the garden. Dubbed Atlantic Ocean Hall, the mass-timber volume is meant to host events, presentations or larger gatherings within the embassy.

According to Fentress Architects, the mass-timber structure evokes Scandinavian woodworking techniques, especially Viking shipbuilding. In addition to being a more sustainable structural material, the architects claim that the structure could be taken apart and re-used in the future.

The Royal Norwegian Embassy was Fentress Architects’ first embassy project. The studio was founded by American architect Curtis Fentress in 1980, and now has offices in Los Angeles, San Francisco, Washington, D.C. and Houston, in addition to their main office in Denver.

Other notable embassies and diplomatic facilities that have been recently completed include the interiors of Switzerland’s Consulate General in Chicago by HHF and Chicago-based studio Kwong Von Glinow, and SHoP Architects’ US Embassy in Bangkok.

The photography is by Alan Karchmer/OTTO.