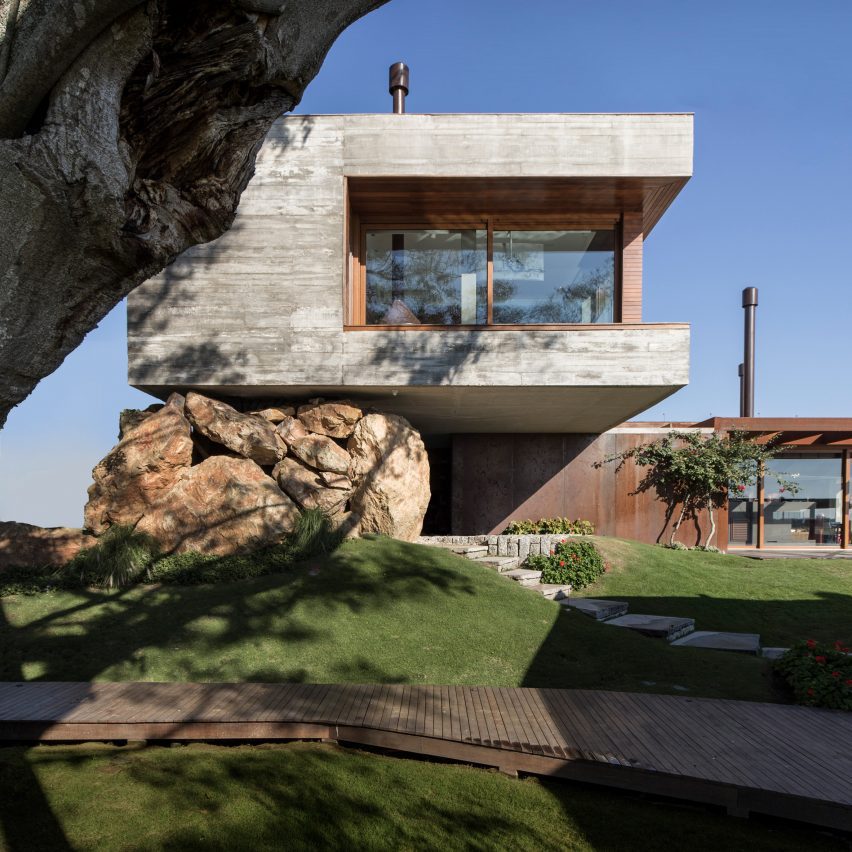 Large stones conceal a single column supporting the upper level of this concrete house near Porto Alegre, Brazil, configured to protect the roots of a centennial fig tree.

Designed by local architects Stemmer Rodrigues, the Casa Figueira – or Fig House – is a modernist-style concrete house in Eldorado do Sul, a residential community that sits across the Guaiaba Lake from Porto Alegre.

The home’s main feature is the overhanging second floor, which defines the driveway and forms a passage through to the back yard.

This windowless concrete volume is made to appear as if supported by natural stones that contrast the facade’s smooth finish.

This formation conceals a single column, which was placed to avoid disrupting the roots of a nearby fig tree that lends the house its name.

“The composition of the front facade is a harmony of contrasts between the rigidity of the concrete and the large rock that simulates the support of the volume and hides the pillar, paying homage to a strong element of the regional landscape,” explained Stemmer Rodrigues.

The only other elements visible on the facade are the front door, which is marked by a curved concrete wall, and the wooden garage door.

On the ground floor, Stemmer Rodrigues laid out an open-concept kitchen, living and dining room to face views of the tranquil waterfront beyond the edge of the property.

“The facade facing the street was designed to block the south wind, and the views are therefore turned to the opposite direction, maximising the contact with the canal water, energy efficiency, and privacy,” the architects said.

Two sides of this volume are enclosed with full-height sliding glass walls. Immediately outside of them, an overhanging weathered steel canopy avoids the sun directly hitting the glazed surfaces.

The upper level runs parallel to the waterfront, and contains four bedrooms. The north side of the home, facing away from the street, is clad in ipe – a traditional Brazilian wood prized for its vibrant colour and durability.

A few steps away from the main building is a pavilion containing a secondary kitchen and dining area. This stone building is slightly lower than the rest of the property and is fronted by a walkway leading to a boat launch.

Porto Alegre is the capital of the Brazilian province of Rio Grande do Sul. Other projects in the area include a house for a yoga teacher also by Stemmer Rodrigues, and a house for a car collector featuring a glass-bottomed pool that offers views of the garage below.

The photography is by Marcelo Donadussi.