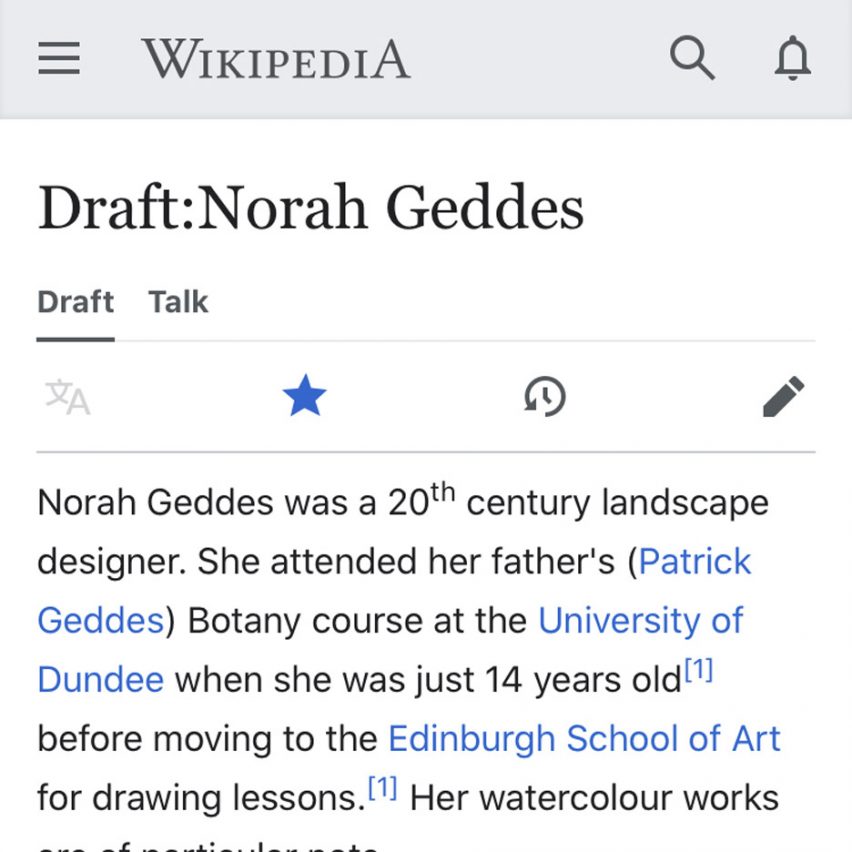 Women’s architecture collective Part W is one of several organisations working to increase the number of female architects listed on Wikipedia. On International Women’s Day, Sarah Ackland has picked five significant women that she believes should have pages on the site.

The current and historic gender imbalance of those working in architecture is well documented and is reflected on Wikipedia, where many significant women architects do not have listings.

According to Ackland, only 17 per cent of all biographies on Wikipedia are about women and this makes it is harder for the general public to find information about female architects.

“Wikipedia is the first place many members of the public, students, journalists and designers look to access generalist knowledge on many topics,” Ackland told Dezeen.

“You can’t be what you can’t see – and so it’s important that Wikipedia include significant women, as well as men, so as to offer role models, information and learning about the work of female architects.”

One of the issues facing those creating entries is that Wikipedia requires digital or archival citations to justify inclusion. Due in part to the way that “women’s work” has traditionally been recorded and attributed, these are often not available.

“Women’s histories tend to lack an archive or are collected in diaries and in less ‘academic’ or ‘egotistical’ manners. Often women’s work was credited to men before the Sex Disqualification Act of 1919,” Ackland explained.

“Women’s work is less visible and less readily available on the Internet and therefore women’s contributions to history are easier to question, doubt or scrub out from history. By having women’s work more present online, future students and architects can diversify and decolonise their references and subjects of study.”

“Wikipedia is rife with systemic bias”

Ackland also believes that systemic bias by predominately male editors of Wikipedia is another reason that entries about women are questioned or deleted.

“Despina Stratigakos explains in her book Where are the Women Architects? that women contributors routinely find that Wikipedia editors question the significance of women’s pages and subsequently they are removed,” explained Ackland.

“Wikipedia is rife with systemic bias, in the UK only 13.6 per cent of wiki editors self-identified as female.”

“Racial diversity is unrecorded but widely acknowledged as well,” she continued. “The stereotype of a Wikipedia editor is a 30-year-old white man. This brings issues of unconscious bias into the equation, with the work of black architects and designers from minority groups too often being unrecorded.”

Ackland picked five architects after finding out that several women on Part W’s alternative list of RIBA Royal Gold Medal winners did not have Wikipedia pages.

According to Ackland the bias towards female architects on Wikipedia also extends to the length and depth of entries, which in many cases are “starkly thin in comparison to those of their male counterparts”.

“While entries for female architects and female architects of colour such as Norma Merrick Sklarek, Beverly Loraine Greene, Yasmeen Lari, Elizabeth Carter Brooks and Sharon Egretta Sutton are woefully thin by comparison,” she continued. “This is not a result of any of these women having done less work – rather, a case of their work being undervalued.”

Below are five women architects that Ackland is in the process of creating or expanding Wikipedia pages for.

“Liz Goldfinger was responsible for iconic furniture designs during the 1960s and was trained at Central Saint Martins,” said Ackland.

“She is well known for her pieces such as the ‘Liz Box’, a laminated birch plywood low table/storage box which can be seen at 2 Willow Road, her father’s 1939 modernist house design in Hampstead. Many of her designs were ‘postable’ or ‘flat pack,’ however, she innovated a design for pieces to slot together, negating the need for screws or Allen keys.”

“With a complicated, largely undocumented and unclear history, Jean was married to two architects, one who designed Churchill Gardens in Pimlico,” said Ackland.

“Jean worked around the 1950-60s and is noted as a plantswoman, counsellor, gilder and restorer, with clear talent in many areas. Jean reportedly worked alongside both; however, she was never formally credited for her work and was actually removed from an article including her name.”

“A 20th-century landscape designer, Nora attended her father’s botany course when she was just 14 years old before moving to the Edinburgh School of art for drawing lessons,” said Ackland.

“She worked extensively on the Royal Zoological Society Scotland Garden alongside work at Chessel’s Court, Johnstone Terrace and the Westport.”

“Mary Lovelace forged her way through architectural education before women were even accepted to study at many institutions,” said Ackland.

“She was a committee member of the Chelsea Society, which was founded in 1927 to protect our build environment. She was an acclaimed artist and activist who trained with an architecture firm to hone her skills to work on estates in Ockham Park, Surrey and Ashley Combe in Somerset.”

“A proclaimed architect, activist and teacher, Elizabeth’s mother had been a former slave,” said Ackland.

“Elizabeth defied the limitations of her time and was passionate to create equality for all. She initially worked with the National Association of Coloured Women’s Clubs working passionately to help other African Americans achieve personal success and campaigned tirelessly to preserve black heritage buildings in the US,” she continued.

“Despite her important contribution she only has a short Wikipedia entry.”