This video footage shot by Dezeen shows a huge section of the brutalist Robin Hood Gardens estate being torn apart by a demolition claw.

Destruction of the seminal 1970s estate in east London, designed by architects Alison and Peter Smithson, first began in August 2017. But the two concrete slab blocks that make up the complex have remained largely intact until now. 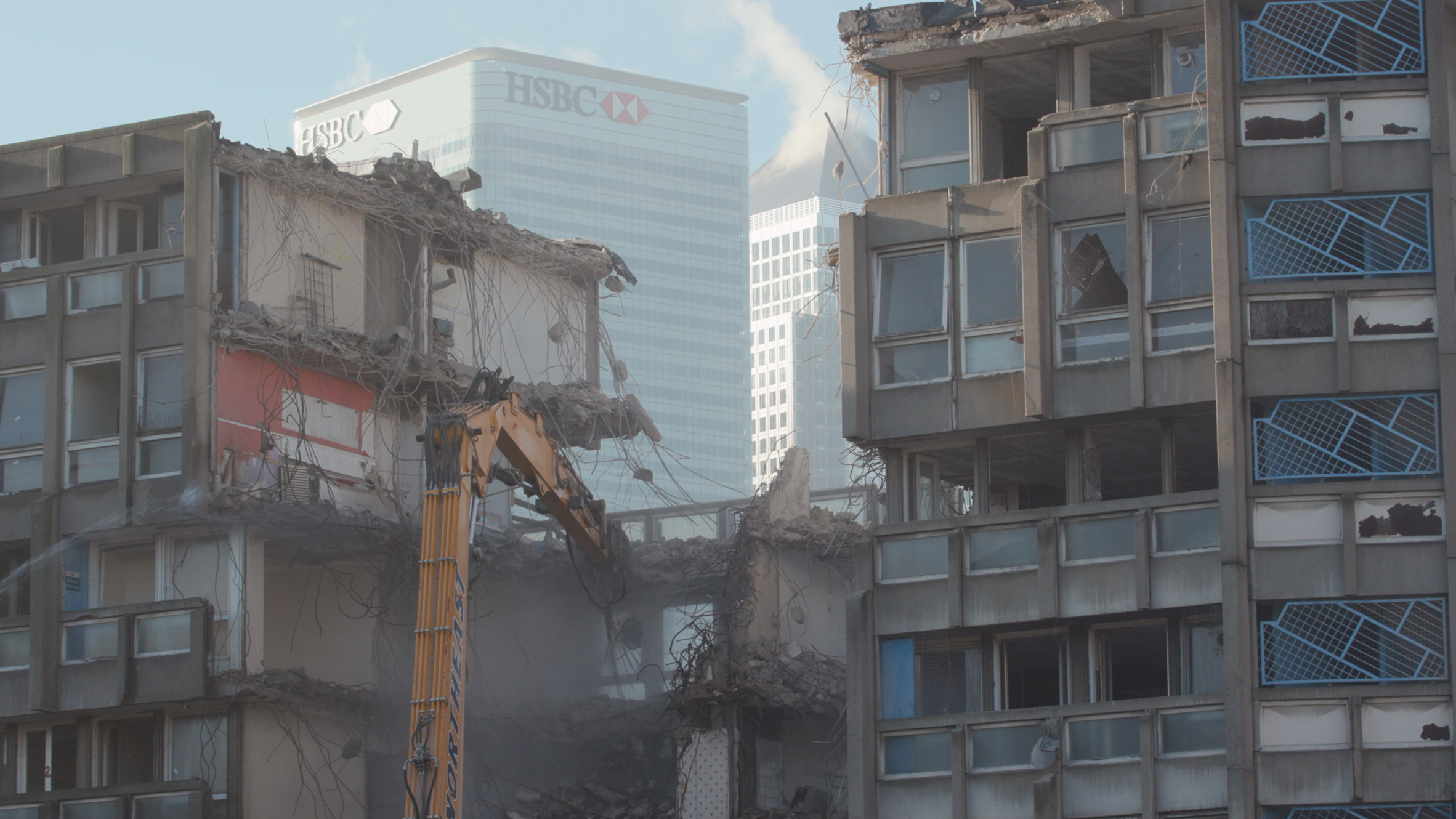 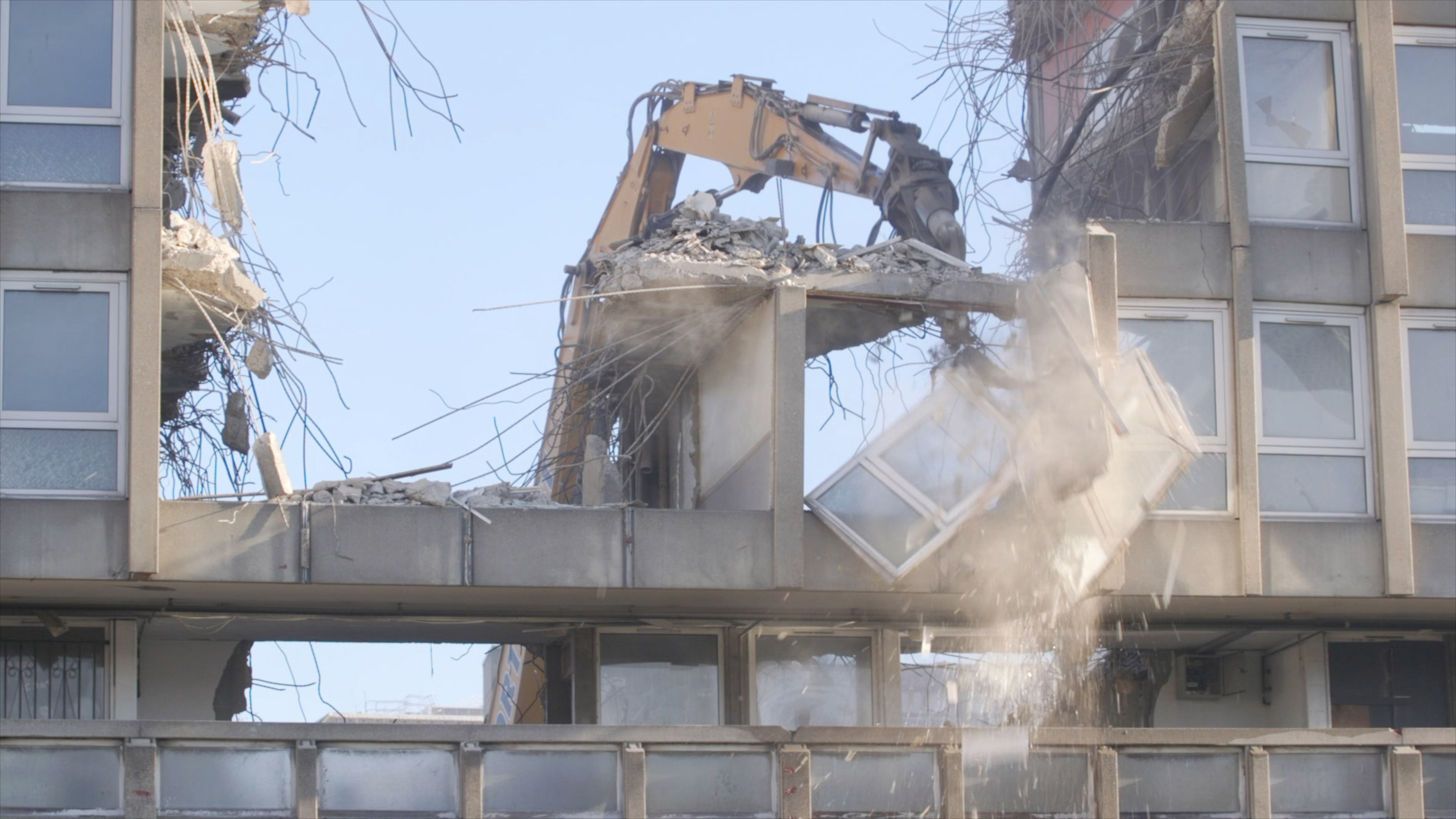 The machine can be seen pulling through the building’s “streets in the sky” – the network of outdoor walkways connecting every home, and one of the key elements of the Smithsons’ celebrated design.

It can also be seen knocking out windows and tearing through floors. 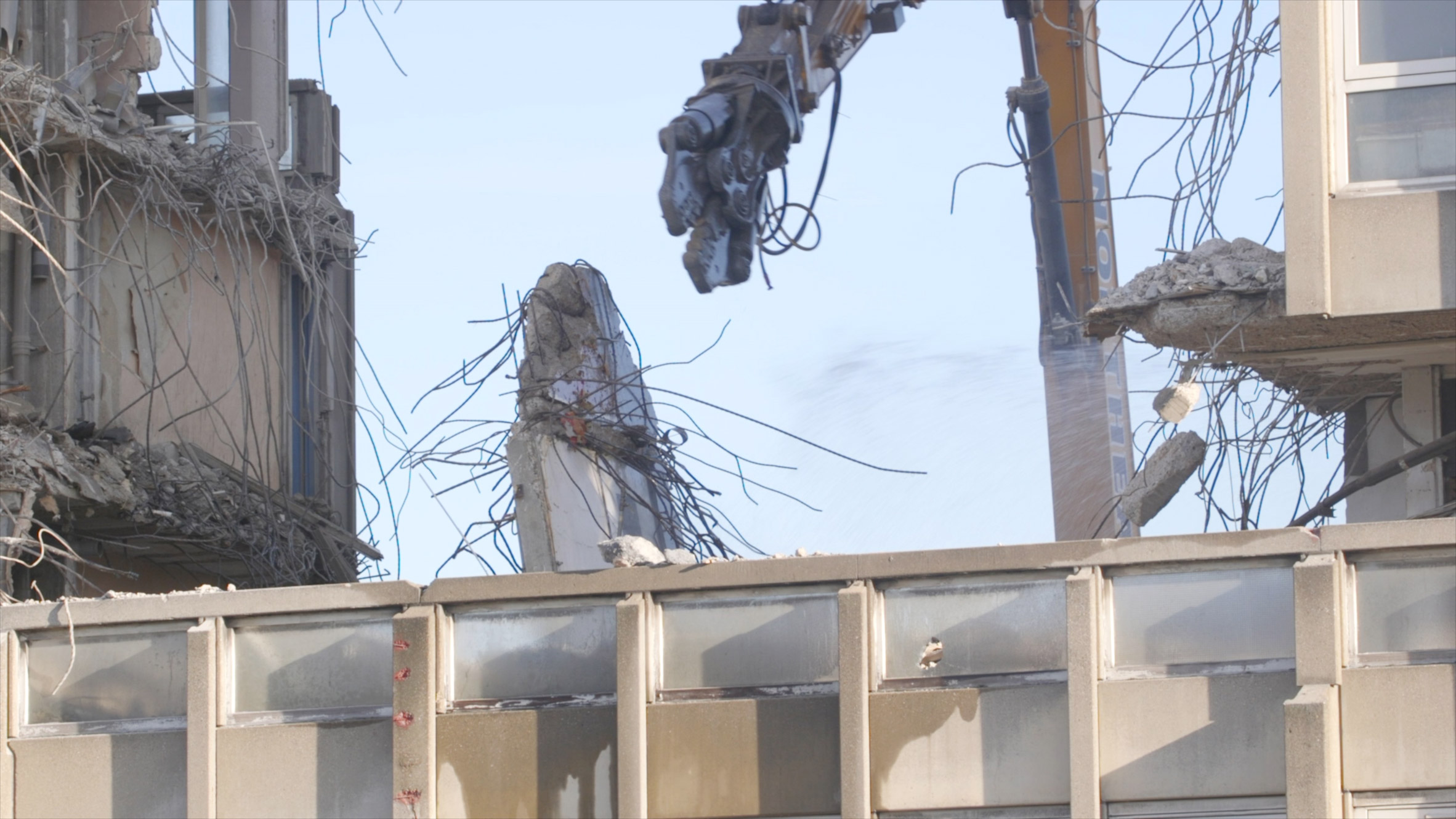 Robin Hood Gardens was completed in 1972. Located in Poplar, near the Blackwall Tunnel, the estate comprised two long, crooked slab blocks arranged around a large garden with a grassy mound.

The demolition of the estate has been in the works for nearly a decade. Back in 2008, when the buildings were first revealed to be at risk, hundreds of architects – including Zaha Hadid, Toyo Ito, Richard Rogers and Robert Venturi – campaigned to grant them a heritage-listing.

Led by heritage body the Twentieth Century Society and supported by architecture magazine BD, campaigners argued that the historic structures were one of the UK’s most important examples of brutalist architecture.

However, the campaign was unsuccessful and Robin Hood Gardens was granted immunity from listing, paving the way for the site to be redeveloped. 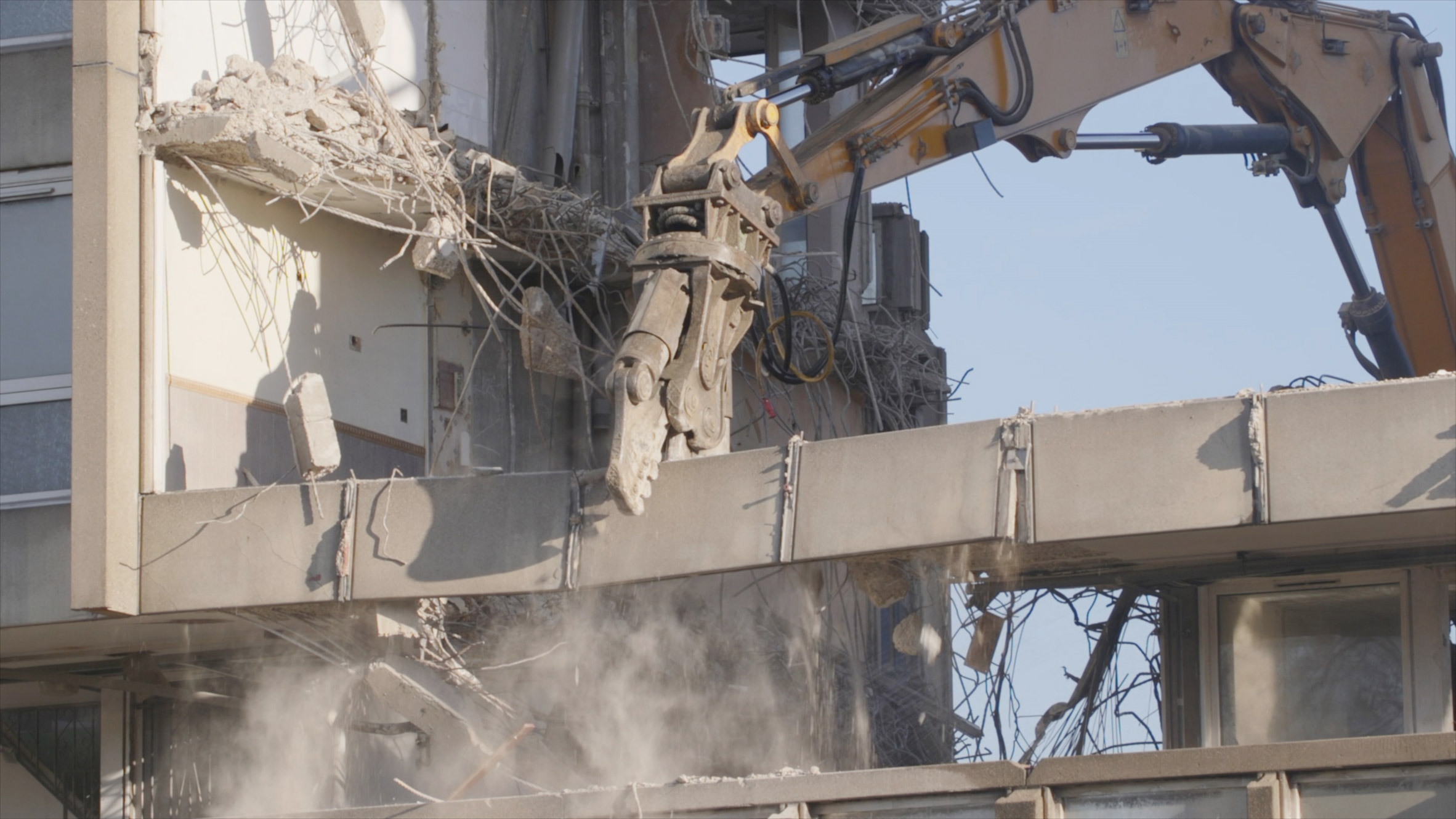 Developer Swan Housing, supported by Tower Hamlets Council, plans to replace the estate with a larger housing scheme – providing 1,575 homes, instead of the 213 of Robin Hood Gardens. The new buildings are designed by London studios Haworth Tompkins and Metropolitan Workshop, and Scandinavian firm CF Møller.

Speaking to Dezeen shortly before the demolition began, Simon Smithson – Alison and Peter Smithson’s son – described the destruction of Robin Hood Gardens as an “act of vandalism”. He also accused politicians of tampering with the heritage-listing system, to ensure the estate was destroyed.

Similarly, the Twentieth Century Society recently added the estate to its growing list of lost architectural treasures, and hit out at the UK’s planning system for failing to protect the country’s architectural heritage. 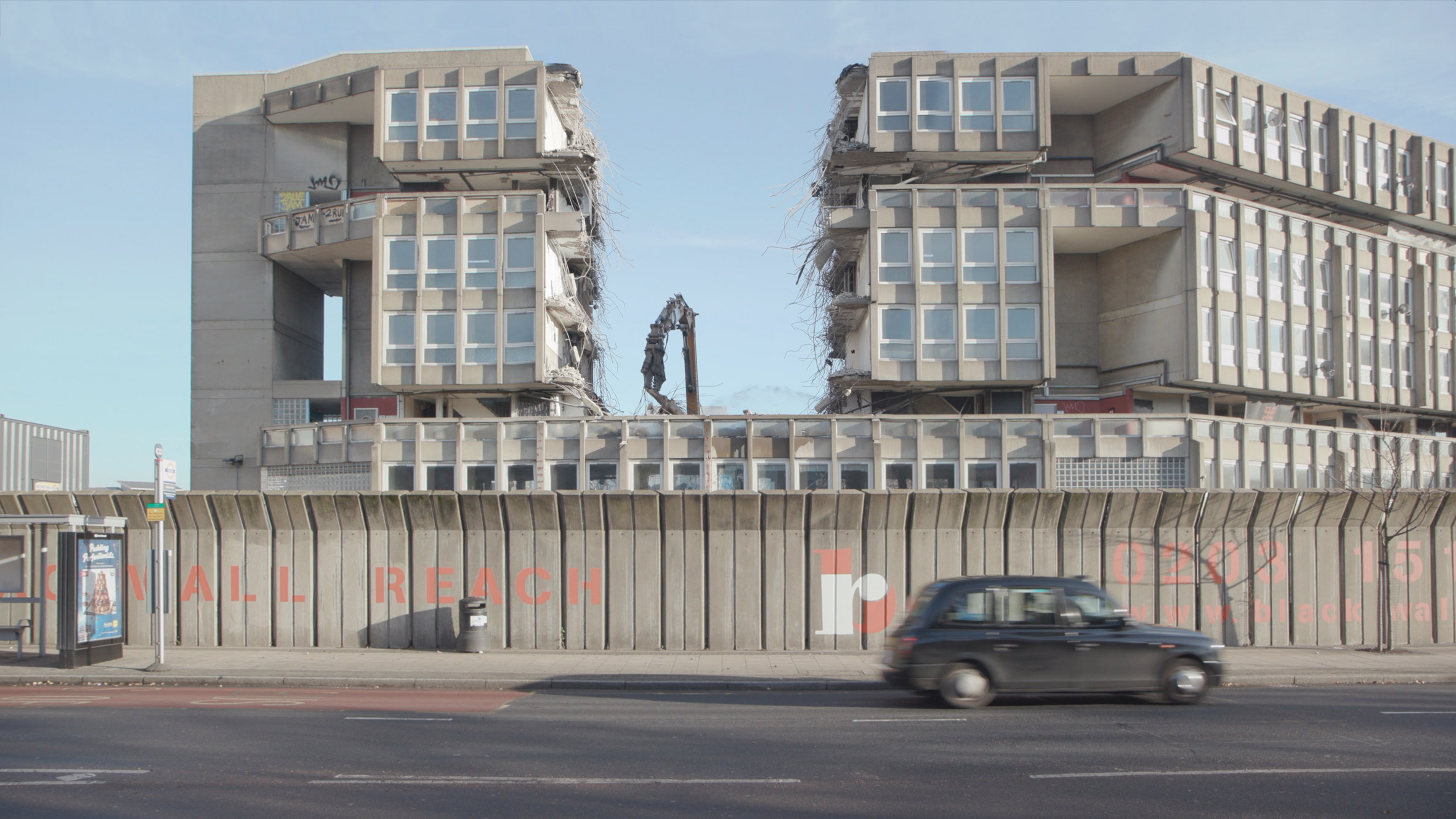 But the complex will not be entirely lost – the V&A museum recently announced plans to salvage a three-storey section of one of the buildings.

The section it has acquired measures nine metres high and 5.5 metres wide, one full section of the repeating pattern of prefabricated parts that form the buildings’ facades.