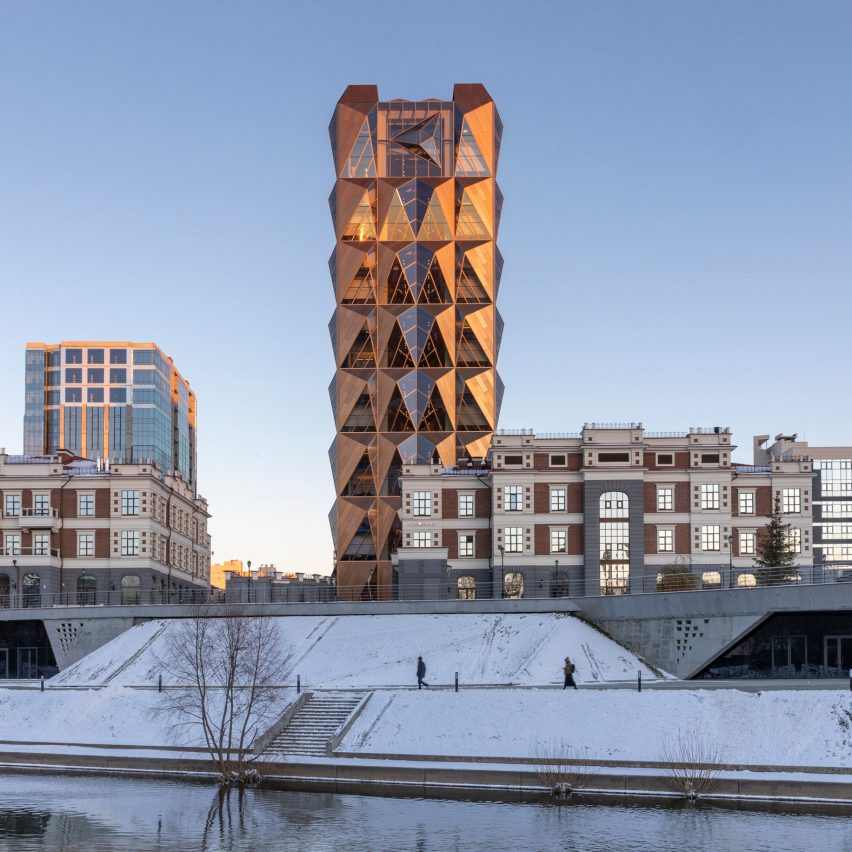 Foster + Partners has designed an appropriately coloured office block for the Russian Copper Company in the city of Yekaterinburg, which is the studio’s first project in Russia.

Overlooking the Iset River in the centre of the city in central Russia, the 15-storey office block was built as the headquarters for the Russian Copper Company (RCC) – one of the country’s biggest copper mining companies.

The distinctive tower was designed to directly reference the company’s mining activities.

Its triangular-shaped cladding was informed by the crystal lattice that makes up copper on an atomic level, while the stainless steel cladding panels were coloured using a Physical Vapour Deposition (PVD) process to create a copper-coloured finish.

At the top of the block, the company’s triangular logo was incorporated into the glasswork overlooking the river.

“RCC is one of the world’s leading producers of copper and the building’s triangulated elements draw inspiration from the crystal lattice of copper,” said the studio.

“The crown of the building integrates RCC’s new logo – a rebranding which has, in turn, been inspired by the architecture.”

Within the tower, the offices are arranged in two-storey modules, which is reflected in the arrangement of the cladding panels.

The central spaces, which contain sofas to be used as breakout areas along with a reception desk, are lit by a large window with views across the city. A Y-shaped staircase connects both floors, which can also be reached by lifts.

Alongside the hallway are twenty spaces – five along each side on both floors – enclosed by glass walls that can be used as desk space for up to six people or meeting rooms.

“The building reimagines the conventional cellular office to set new standards in quality, comfort and flexibility,” said the studio.

“The starting point for the office floors was to reinvent the headquarters as a ‘house for staff’ – instead of the conventional large, communal workspaces, the rooms are of a more intimate, domestic scale,” it continued.

“The practice’s workplace consultancy group analysed the client’s operations and helped to devise the innovative modular system for these rooms.”

The building is topped with a floor of executive offices on the 14th floor with a top-lit board room and space for company-wide meeting and events on the top floor.

On the ground floor, the building has a lofty lobby flanked by seating areas and enclosed meeting rooms.

Foster + Partners designed the building to respond to Yekaterinburg’s wide range of temperatures with solid and glass areas on the facade positioned to reduce direct sunlight in summer, but allow low-level winter light into the office.

The design team expects the office to receive a BREEAM Excellent sustainability rating.

The RCC Headquarters is Foster + Partners’ first completed project in Russia and the studio designed many of the furnishings and fittings for the office.

“Together with the client, our integrated team has developed a bespoke solution for RCC’s new headquarters that is a perfect fit for the company and the very nature of their work,” said Jeremy Kim, partner at Foster + Partners.

“Everything from the building structure to the bespoke furniture was designed specifically for the company, illustrating our commitment to craftsmanship.”

Other recent projects by Foster + Partners include a library in Sharjah with a giant cantilevered roof. The studio has also unveiled its design for an office in Madrid that will be located in an abandoned gas plant and filled with green plants.

Photography is by Oleg Kovalyuk.