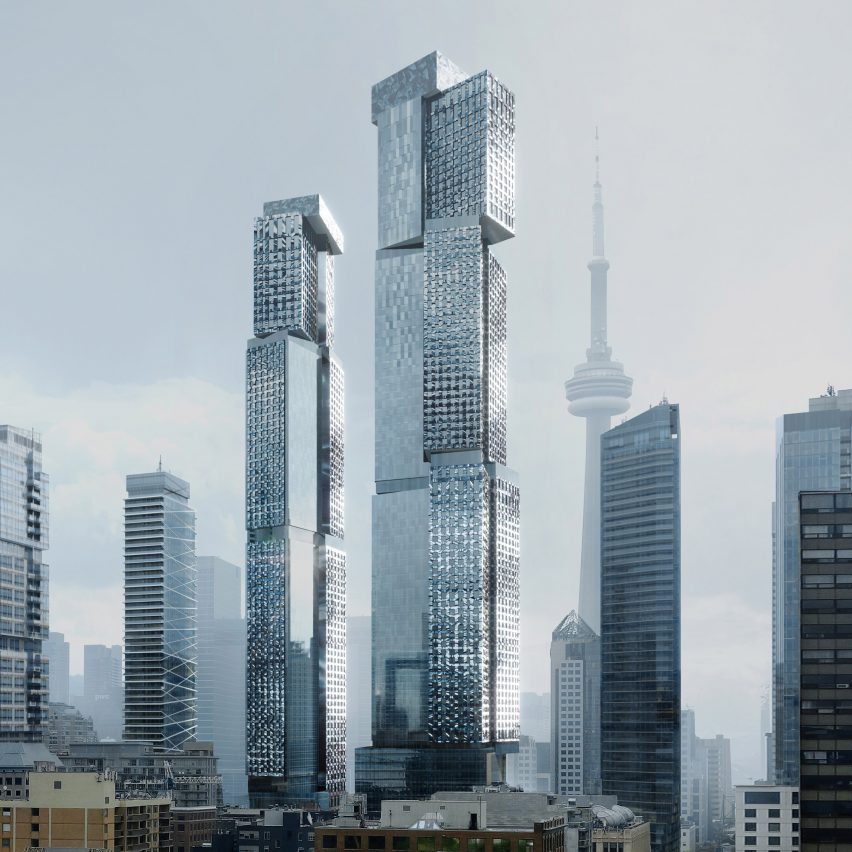 Frank Gehry has released visuals of a pair of twisting shiny skyscrapers, one of which will be over 300 metres, for King Street West in Toronto.

Currently named the Gehry Project, the plan is to build a 302-metre-high supertall and a 266-metre-high skyscraper at the intersection King Street West and Ed Mirvish Way.

These mixed-use high rises will contain residential apartments and a hotel in one tower, and an art gallery and a new campus for OCAD University in the other.

Gehry Project’s height and density were approved in 2017, and this update reveals design decisions made since then including the rotated floor plates and a facade made of textured metal and glass.

“I wanted to create an ensemble of buildings that were respectful to the city and referential to the Toronto that I once knew,” said Frank Gehry.

“I wanted the two towers to each have their own personality, but I also wanted them to talk to each other, creating a dynamic and changing addition to the skyline depending where you were viewing them from in the city,” added Gehry, who will celebrate his 92nd birthday at the end of this month.

“The detailing of the exterior is intended to give the buildings a human scale and hopefully reflect the light and colour from the city and the sky around it. In the end, this should be a building of Toronto that I hope will make the city proud.”

Gehry Project at King Street West has been through several iterations since the project was first mooted in 2012 with Ghery designing three towers ranging from 80 to 85 metres for the site.

An initial redesign in 2013 included a ribbon-like facade connecting the three towers. In 2014 the decision was made to swap three towers for two, making the structures taller and preserving the Princess of Wales Theatre next door.

The project was initially undertaken with Canadian art collector David Mirvish, who sold the project in 2017 to developer Great Gulf, who is undertaking the scheme with Westdale Properties and Dream Unlimited.

“This project represents a coming home for Frank Gehry to the city he loves and will be one of his most significant architectural achievements,” said Westdale Properties COO Mitchell Cohen.

“He is the heart and soul of the project.”

Pritzker Prize-winner Gehry was born in Toronto but is based in Los Angeles, where his practice is part of the team redesigning the LA River with plans for park bridges.

In France, a twisting aluminium-clad tower designed by the architect for the Luma Arles Foundation is nearing completion.