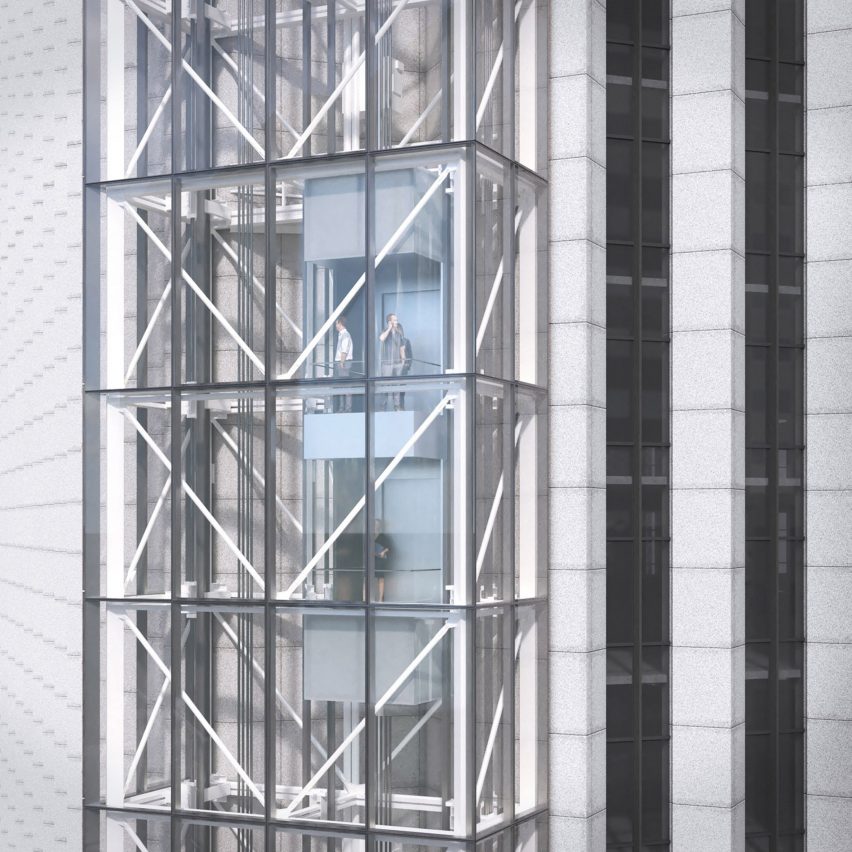 Local firm Solomon Cordwell Buenz (SCB) has conceived a glass elevator shaft to rise up the northwest corner of the 1,136-feet-high (346-metre-high) Aon Center, leading to a rooftop observatory.

Completely glazed, the elevator will rise up 1,000 feet (305 metres) making it the “tallest elevator of its kind in North America,” according to a statement from the firm. The tallest in the world is the 326-metre-high Bailong Elevator, which runs up a cliff in the Wulingyuan area of Zhangjiajie, People’s Republic of China.

The shaft along the Aon Center will house a pair of double-deck elevators and will be anchored at every fourth floor. Visitors are expected to scale to the top of the skyscraper in approximately one minute.

The elevator will mark the city’s third public observatory, in addition to the Willis Tower Skydeck and The John Hancock Center’s 360 Chicago. The latter is similarly thrilling, comprising a moving glass box that tilts visitors over Michigan Avenue.

In SCB’s design, the crown of the building is planned as an observation deck with an indoor viewing area offering panoramic views of the city. From here are views of Millennium Park, Lake Michigan and the Loop.

SCB’s scheme also includes new building to accompany the skyscraper at 200 East Randolph Street to provide access the elevator and observation area. Located off the street, the low-lying structure will be wrapped in glass and topped with a slanted metal roof.

Inside, it will house ticketing booths, as well as shops.

The modern skyscraper – the third tallest building in Chicago – was completed in 1974 by American architect Edward Durell Stone in partnership with Perkins + Will.

Vertical strips stretch to the top and were originally clad in Italian Carrara marble. Stainless steel straps were added to hold the marble in place, and in the 1990s, the entire building was refaced with Mount Airy white granite.

Aon Center was formerly known as Amoco Building, and first served as headquarters for Standard Oil Company of Indiana.

Construction of the glazed elevator, observatory and ticketing hall is to begin this spring. Completion is expected in 2021.

SCB, which was founded in 1930, has played a key role in creating landmarks for Chicago, including creating a rooftop amenity deck for One Prudential Plaza and an updated lobby at the John Hancock Center.

Other projects by the firm include a residential tower in Honolulu with a cantilevered, glass-bottom swimming pool and a student housing complex in Phoenix, Arizona clad in sandstone and metal louvres.

Renderings are courtesy of SCB.