Pastel-coloured walls, wicker furniture and an abundance of planting feature inside this Edinburgh hotel, which New York studio Grzywinski + Pons has designed to contrast with its 18th-century stone exterior. 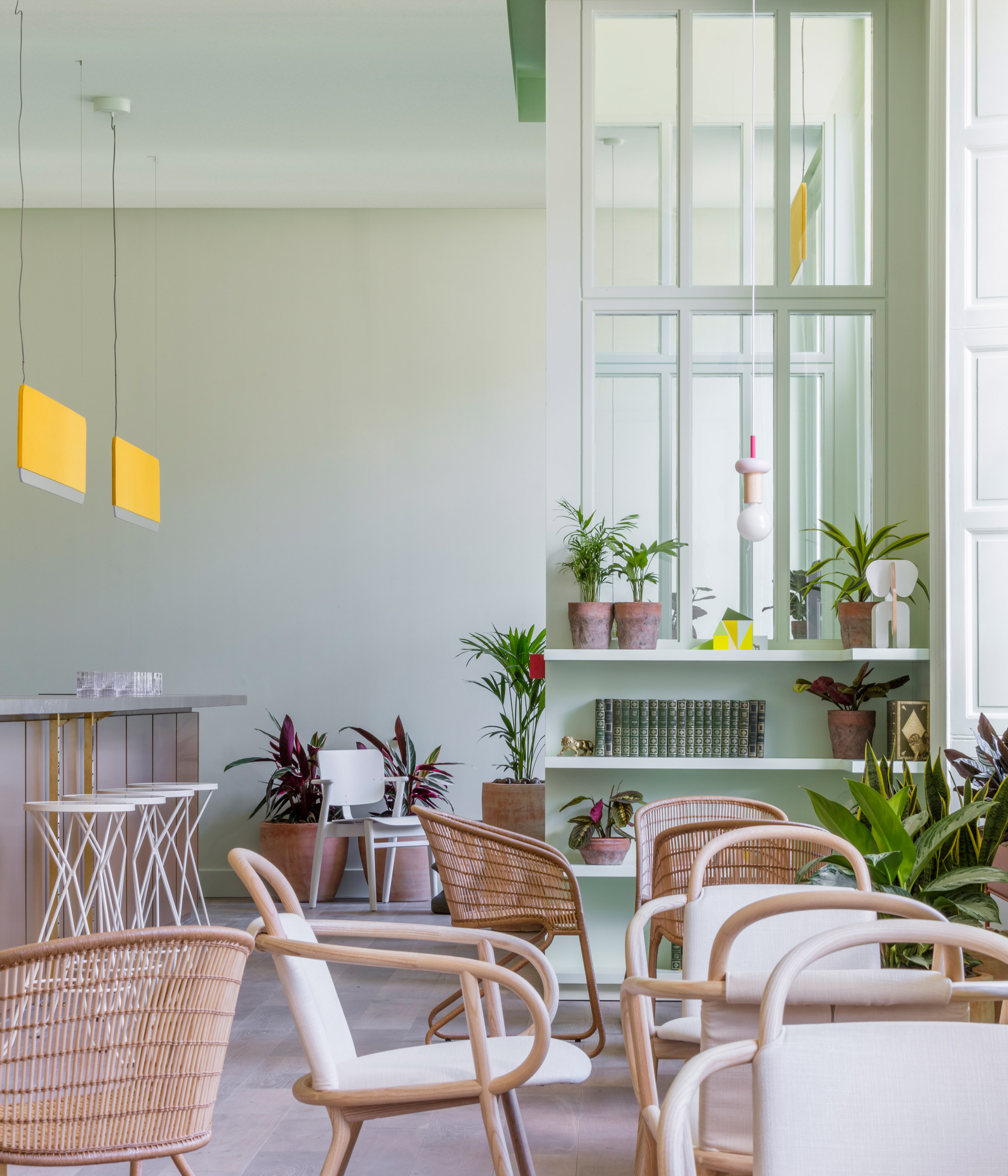 Eden Locke is located in Edinburgh’s New Town, a UNESCO World Heritage Site characterised by properties of the Georgian era. Grzywinski + Pons describes it as “a beautiful, if austere, collection of sturdy and uniform ranks”. 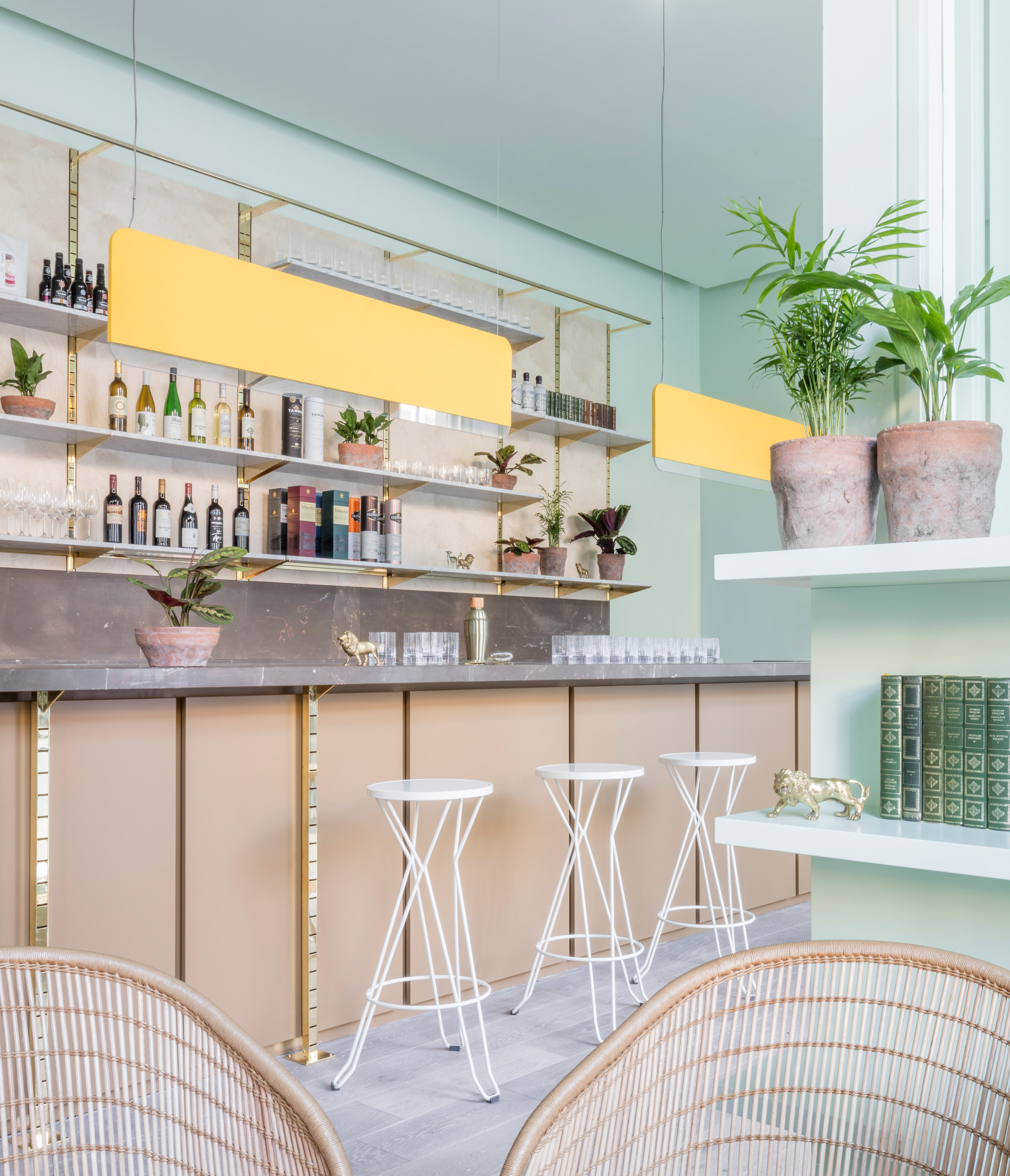 Tasked to transform one of these 18th-century Georgian terraced houses into the 72-room hotel, the studio chose the tropical material palette to contrast with the buildings. The warm colour of the Scottish light that floods in from the large windows also prompted the choice. 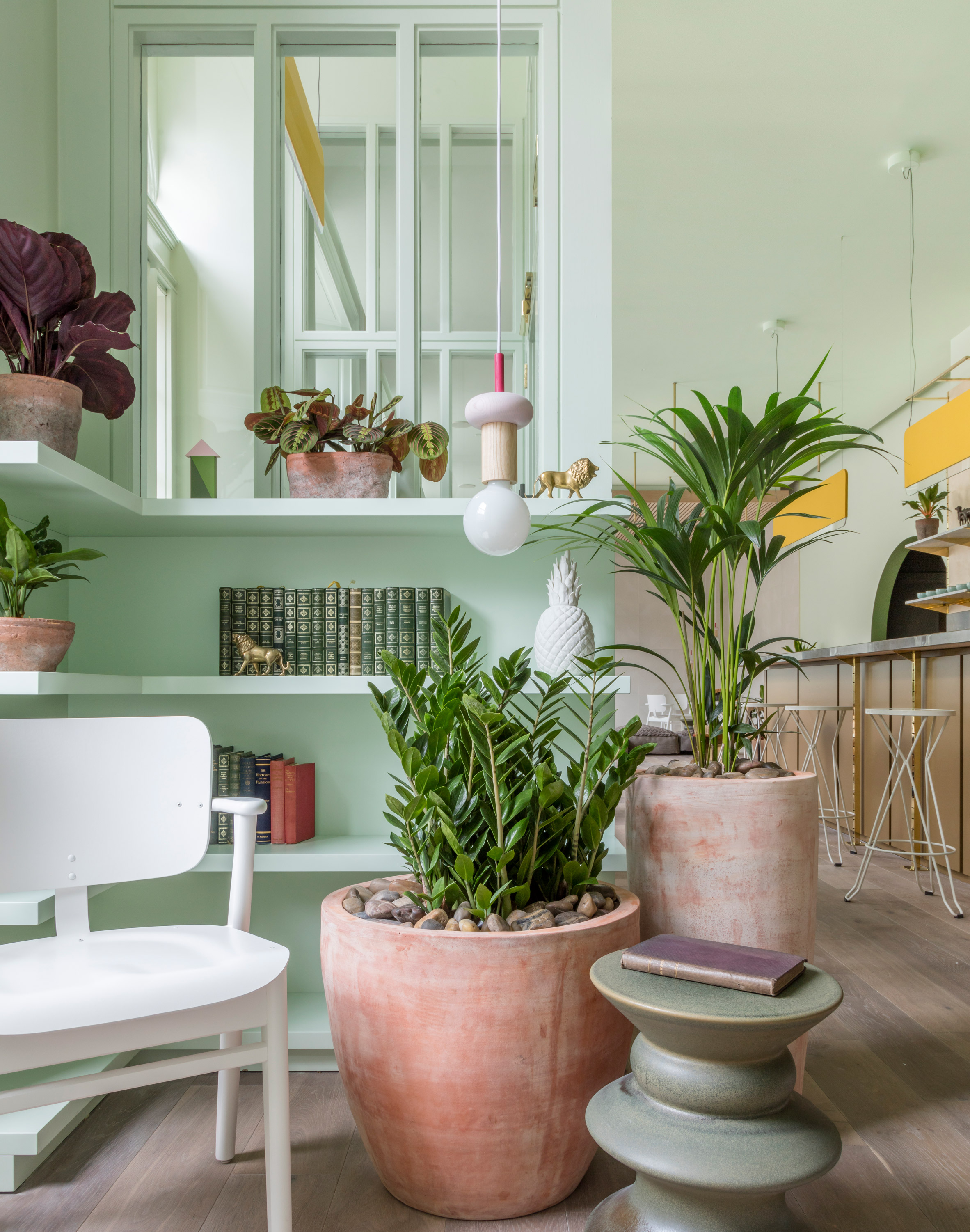 “With a dash of reverence we sought to embellish the building in our own way, and from the inside out,” said the architects, who also tailored the Leman Locke hotel in London for the same design-led aparthotel chain.

“We amplified the visual warmth of the long Scottish light with an approach that leaned towards the sophisticatedly tropical.” 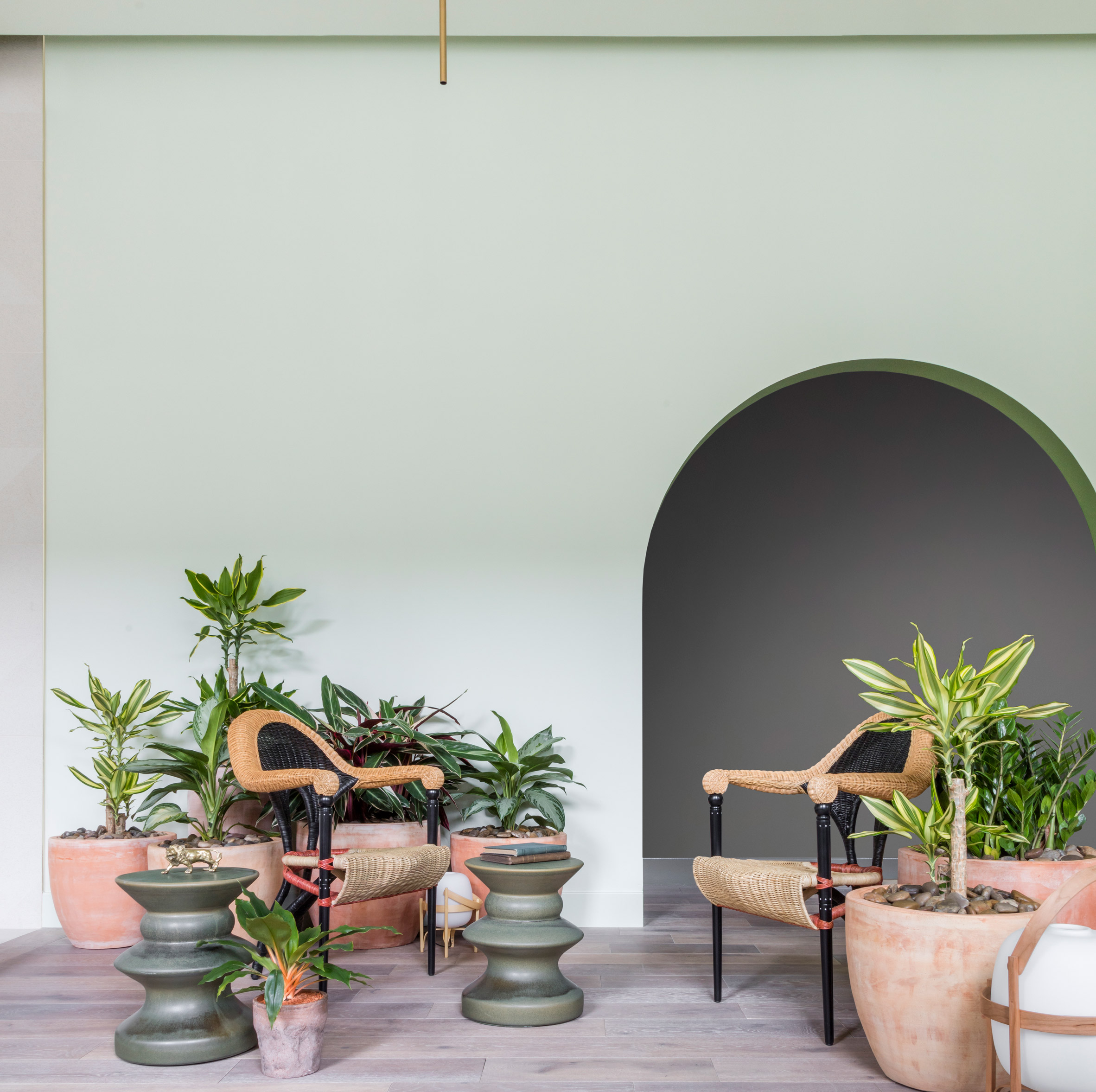 In the ground-floor cafe and bar area, green-painted walls are paired with a variety of wicker furniture custom-made by the studio and knitted floor cushions. Terracotta pots filled with greenery are dotted between. 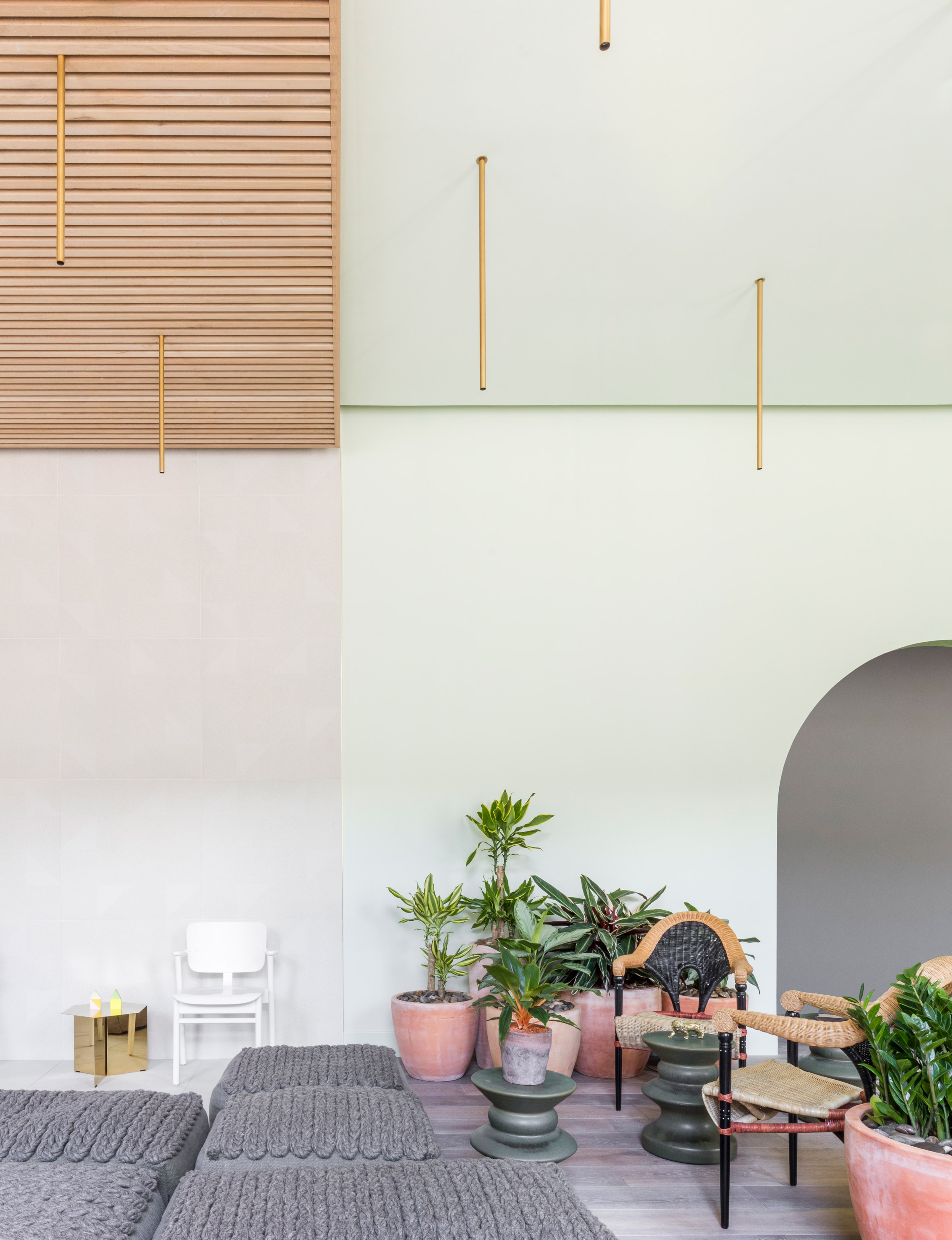 Other furnishings include the pale wooden chairs that are lined up in front of the windows, while a set of yellow pendant lights hang above the bar and provide a contrast to the green.

Shelving behind the bar is made up of marble and brass – materials that the architects chose to bridge the gap between the historic and the contemporary, along with leather, porcelain and stone. 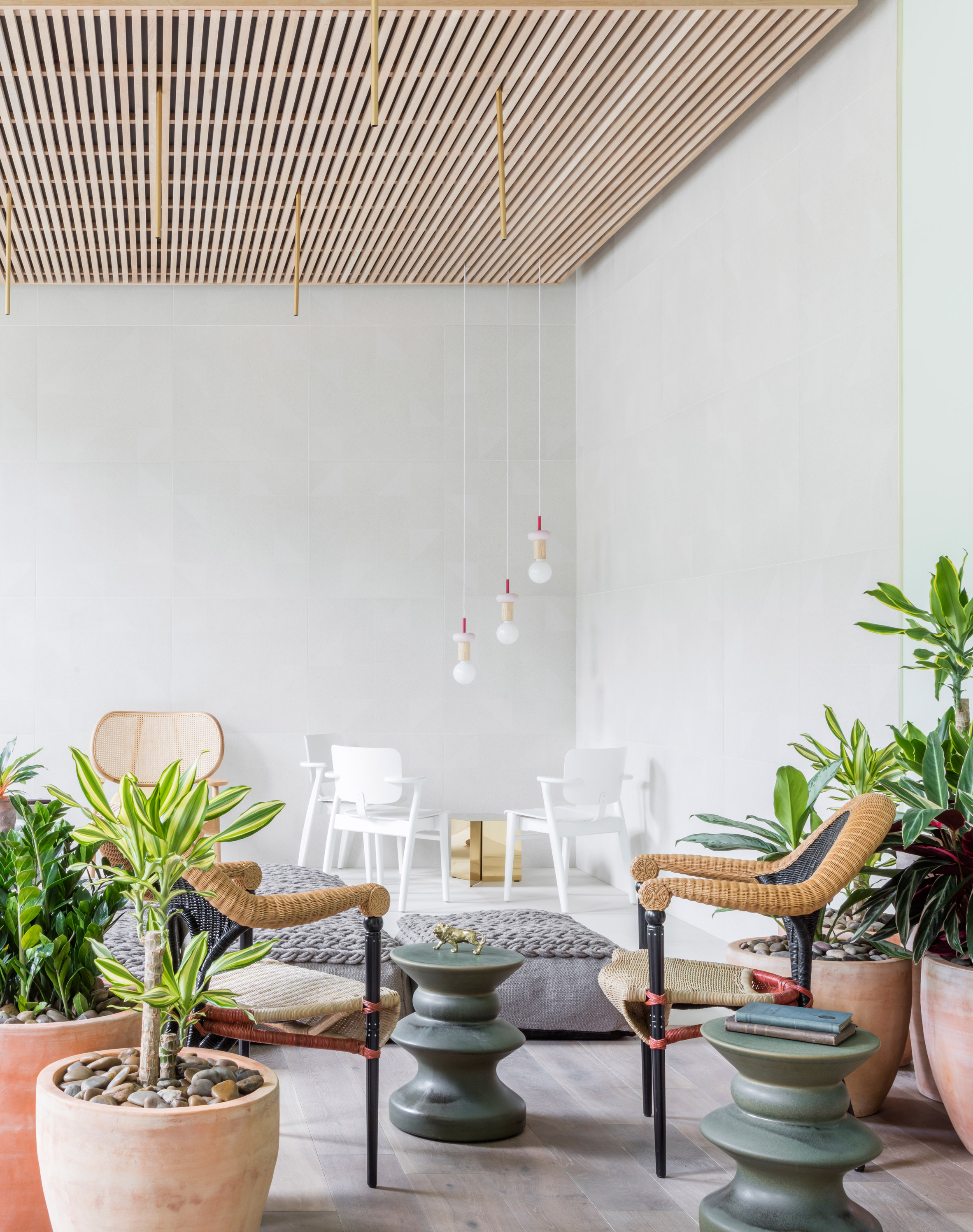 In one corner, pale walls are paired with white chairs, while long pendant lights dangle from a gridded wooden ceiling structure, adding a calmer element to the space.

Particular care was also taken at the entrance, where the doorway is topped by a glazed fanlight and wrought iron. This is shielded from the rest of the space by a timber frame filled with an abundance of glass. 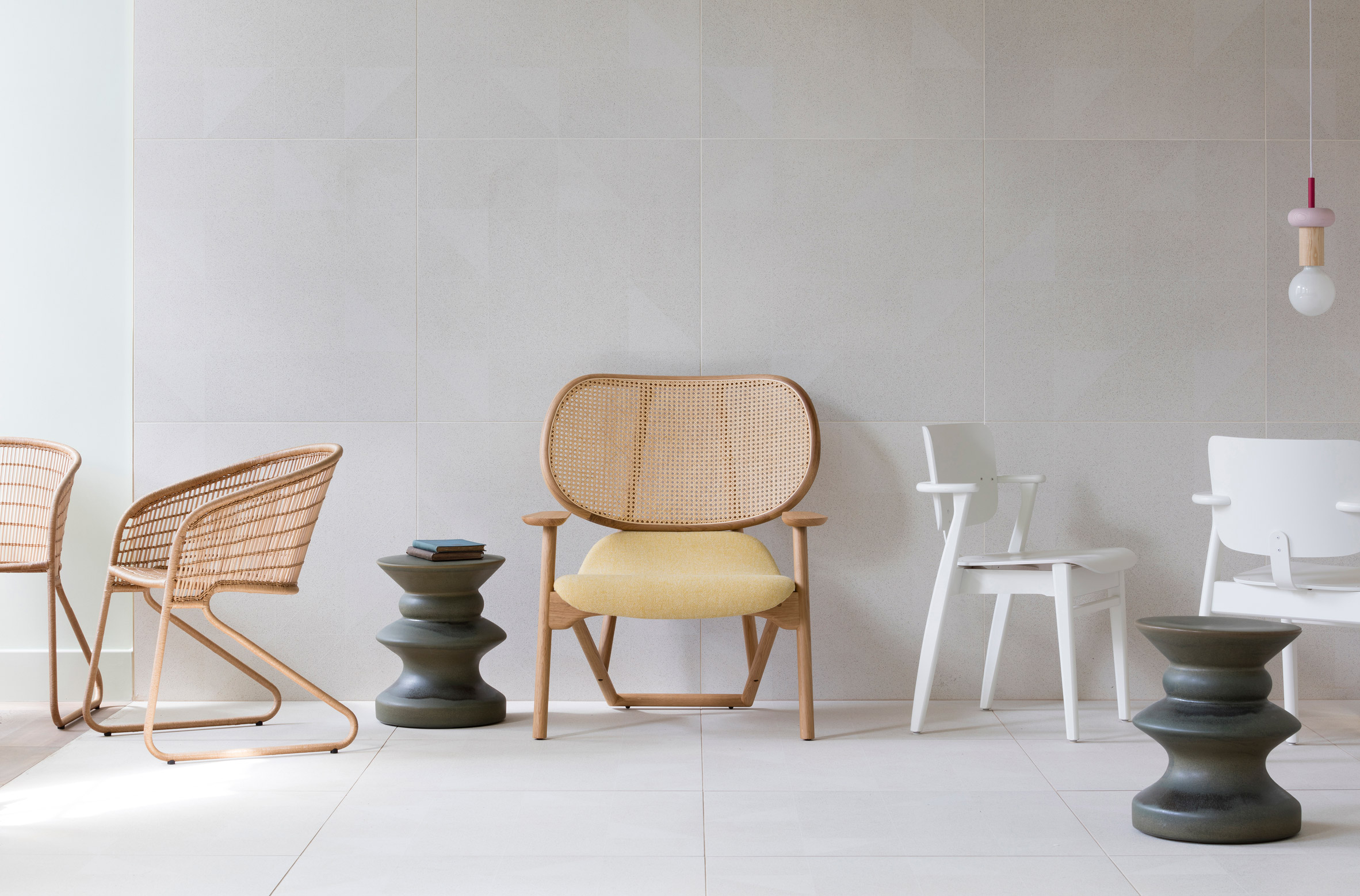 Along with the 18th-century building, the architects also renovated its 20th-century rear extension, and used the contrast of the spaces to their advantage in the bedrooms.

Living areas are placed in the light and lofty spaces of the older structure, while bedrooms occupy the smaller newer space. 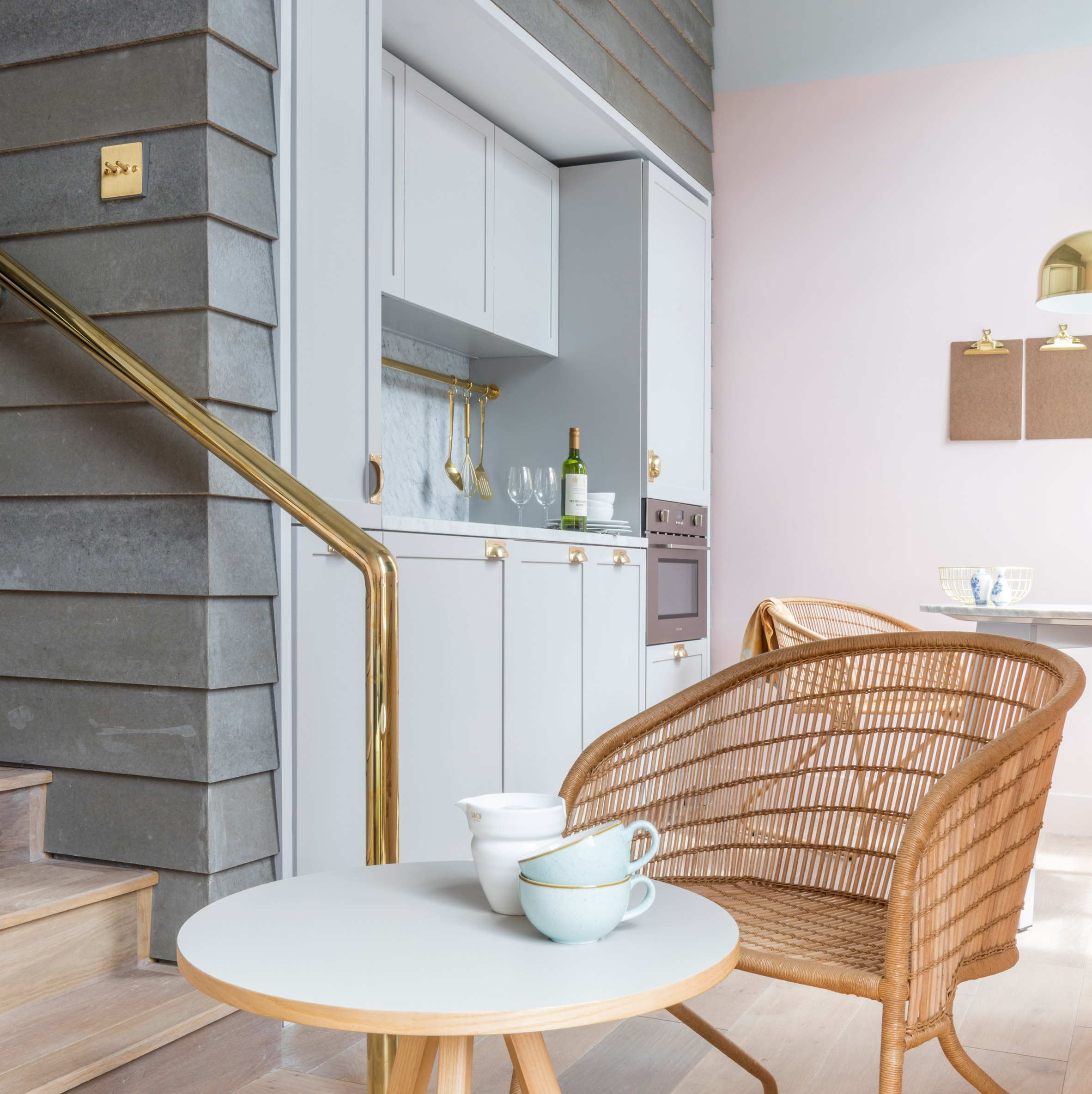 “We manipulated the building sectionally so that rooms spanned both the generous Georgian volume and the tighter spaces of the 20th century addition, yielding some dynamic spaces,” Grzywinski + Pons said.

“We capitalised on the larger period fenestration and lofty ceilings in the public areas of the rooms while beds and circulation sit in the more intimate areas of the hybrid spaces.” 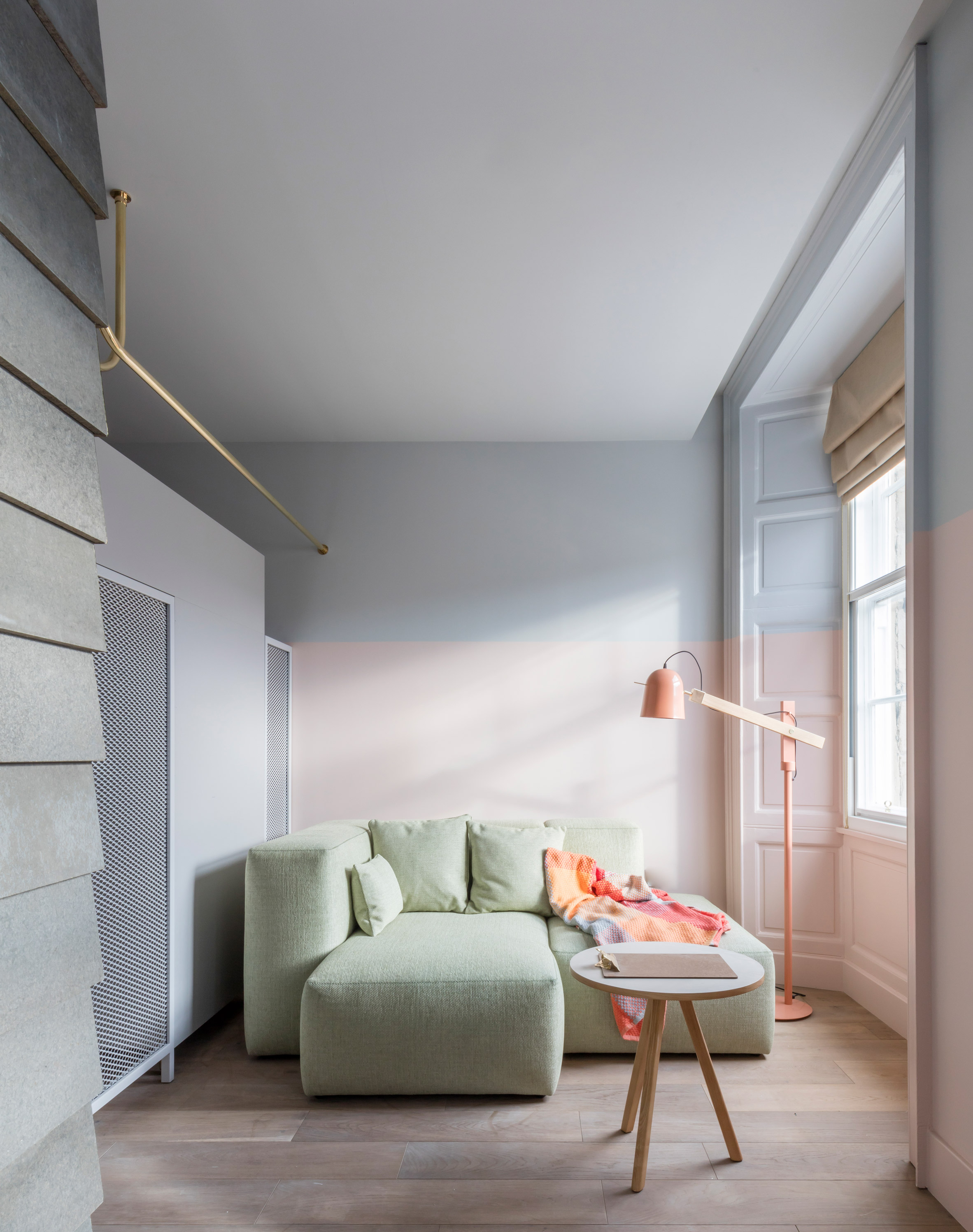 The two levels are linked by a staircase wraps the bathroom and kitchen at the centre of the suite and leads up to the bedroom. In the smaller rooms the custom-made handrail also forms a handrail.

The bedrooms continue the vibrant theme, where pale walls are contrasted with pops of yellow. In one room the walls are painted half pink and half grey – another nod to the joining of two eras. 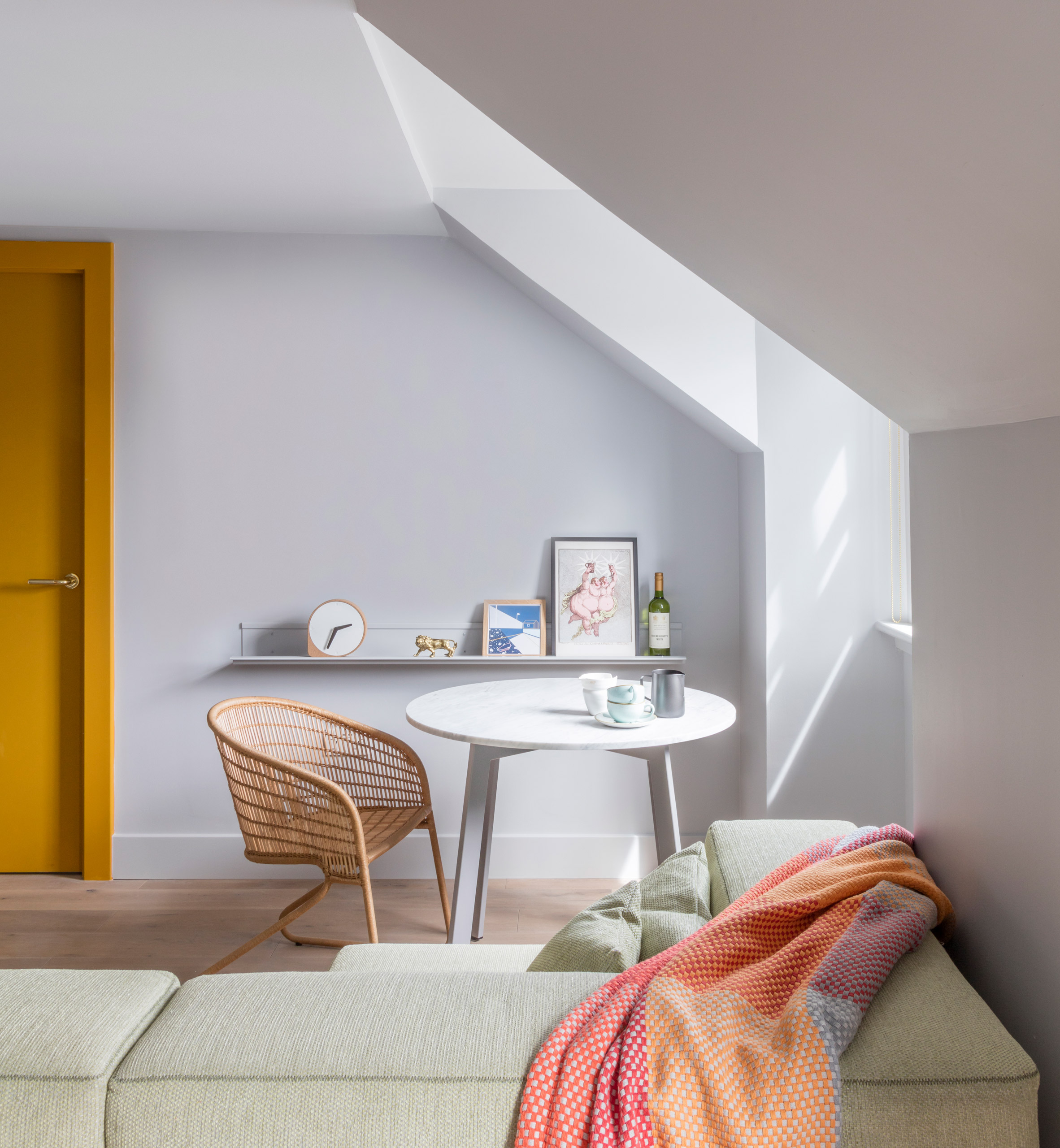 A wide range of materials also feature in the rooms, ranging from mottled headboards, marble kitchen splashbacks, and dark grey board that lines the walls in horizontal bands. 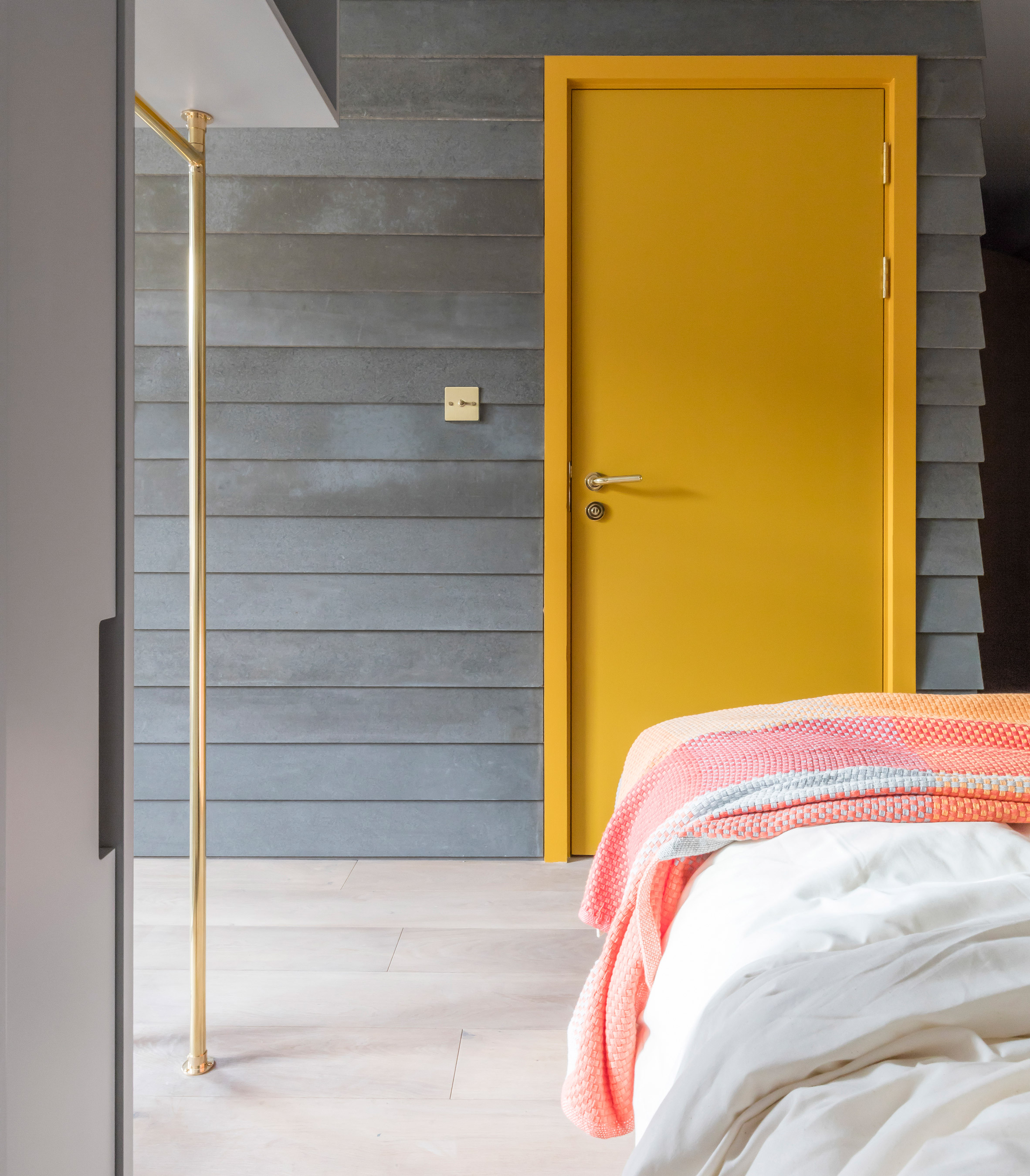 Grzywinski + Pons was founded by Matthew Grzywinski and Amador Pons in 2003. The studio previously paired industrial fittings and a pastel palette for another London hotel, and blended Italian, American and Danish design to create a “mash-up” interior for a hotel in Queens, New York. 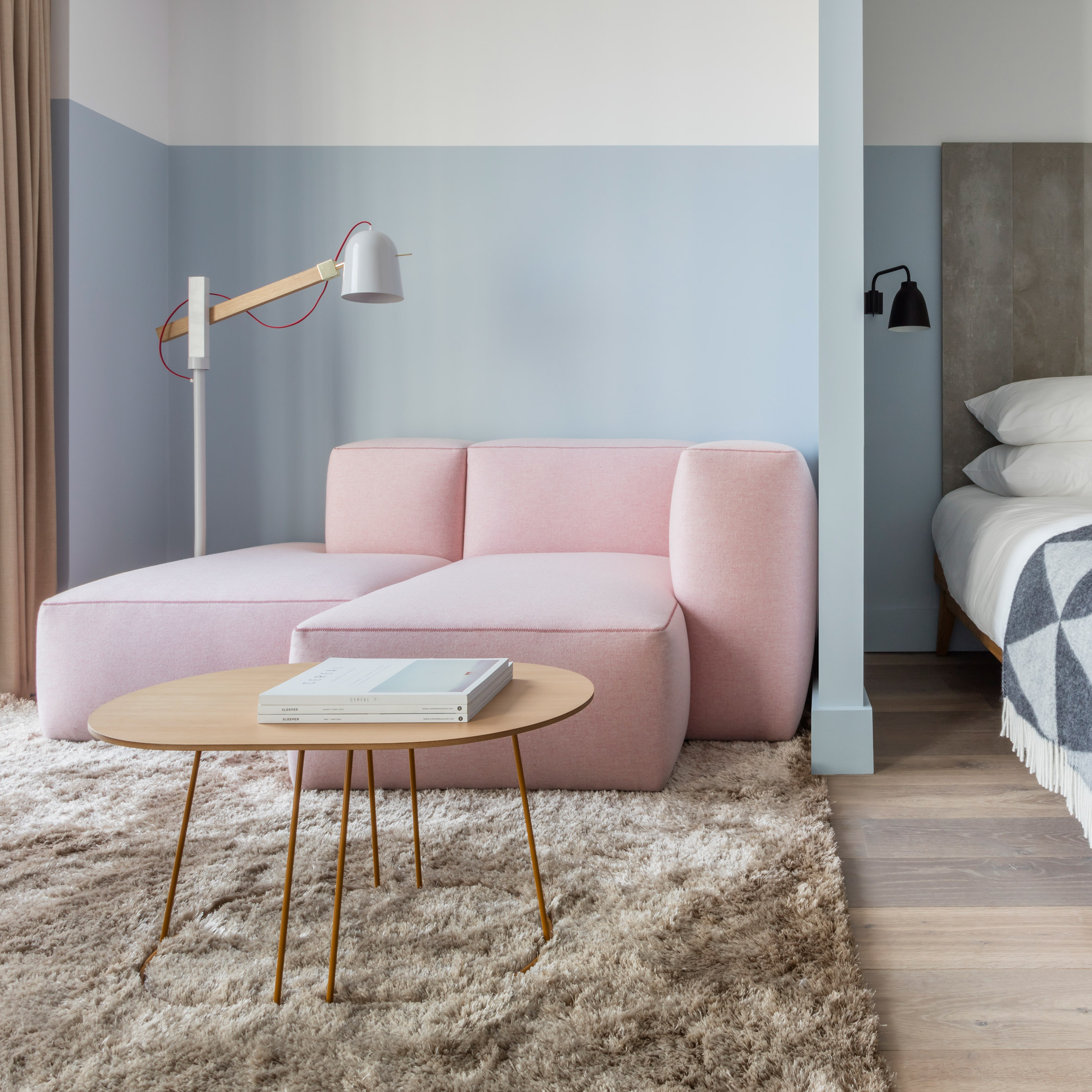 Photography is by Nicholas Worley.