New exterior cladding, a moss garden and a multipurpose room are among the updates to a 1950s residence in the American Midwest revamped by design studio Haus.

The project, called Midcentury Renovation, is situated on a wooded property in Indianapolis encompassing just under an acre. The surrounding area is known for the presence of several exemplary midcentury modern dwellings built in the 1950s and 1960s. 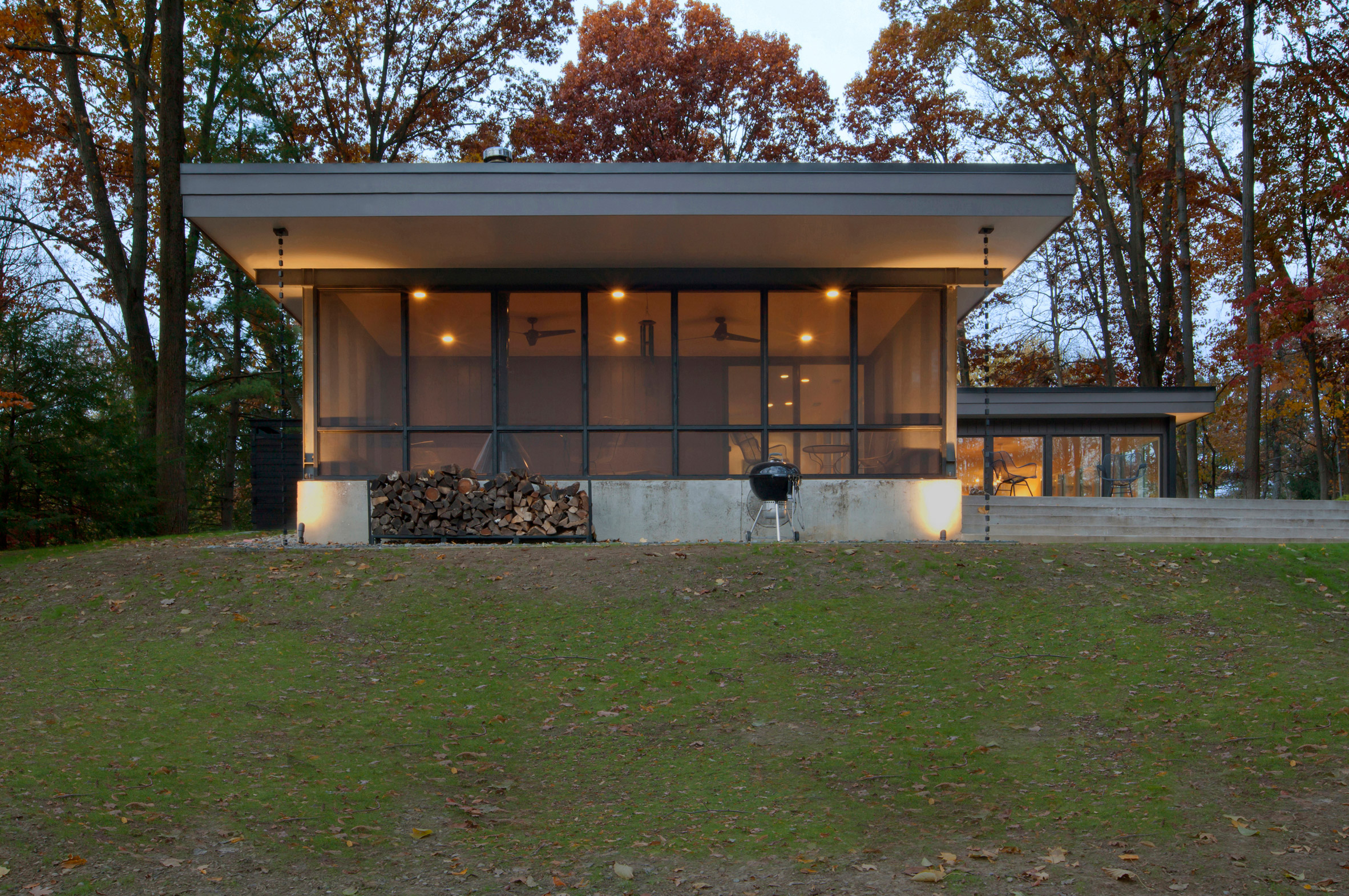 The clients purchased the residence – built in 1956 and designed by Bill Wright of the Indiana firm Vonnegut, Wright, and Porteous – in 2015, after leaving a note for the owner expressing an interest in buying the property if it became available. 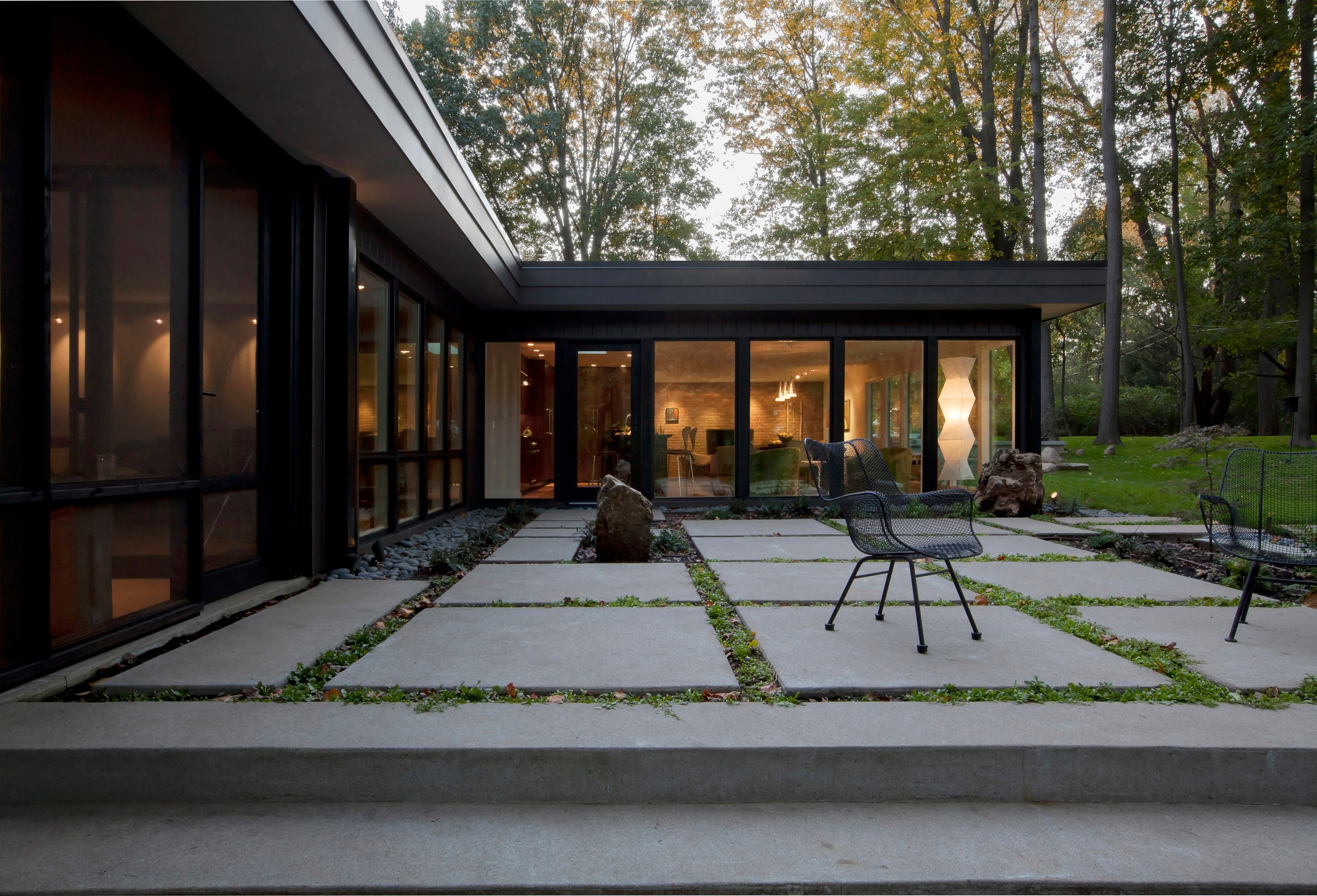 The three-bedroom home had remained unchanged over the decades with the exception of minor renovations in 1967 by the original owner, who lived there until 2013. The architects were charged with enlarging and renovating the low-slung dwelling shaded by mature trees.

“Having worked with this client on their previous mid-mod renovation project in 2011, we were excited about the prospect of working with them again on something more comprehensive,” said Haus. 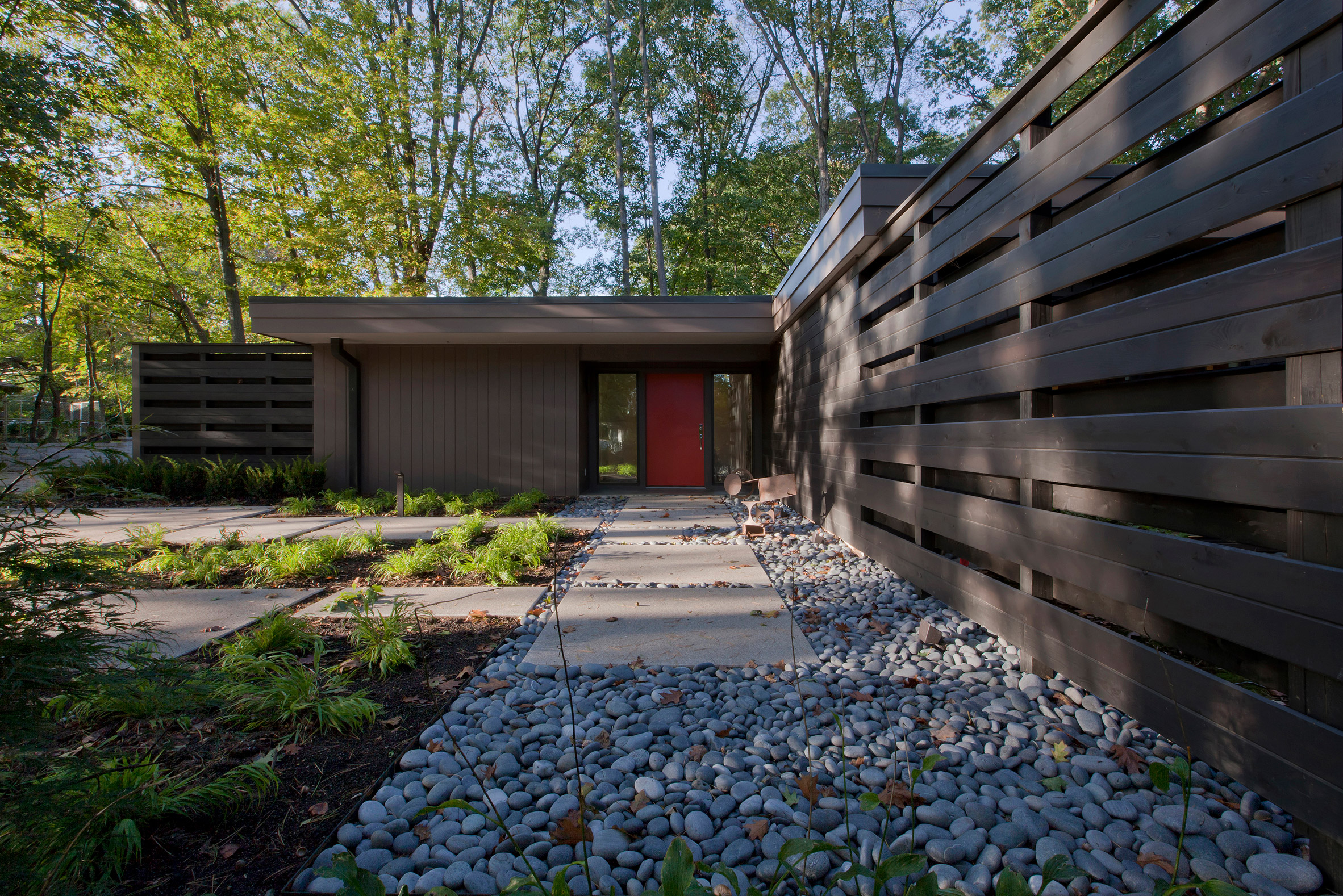 The clients presented the team with a list of goals and priorities. The initial planning process included Haus, an interior designer and the owners, who together conceived various options for the 2,260-square-foot (210-square-metre) dwelling, which was in dire need of repairs.

The original redwood siding was damaged due to woodpeckers and insects, and the home’s flat roof required significant upgrades. The interior also called for an overhaul. 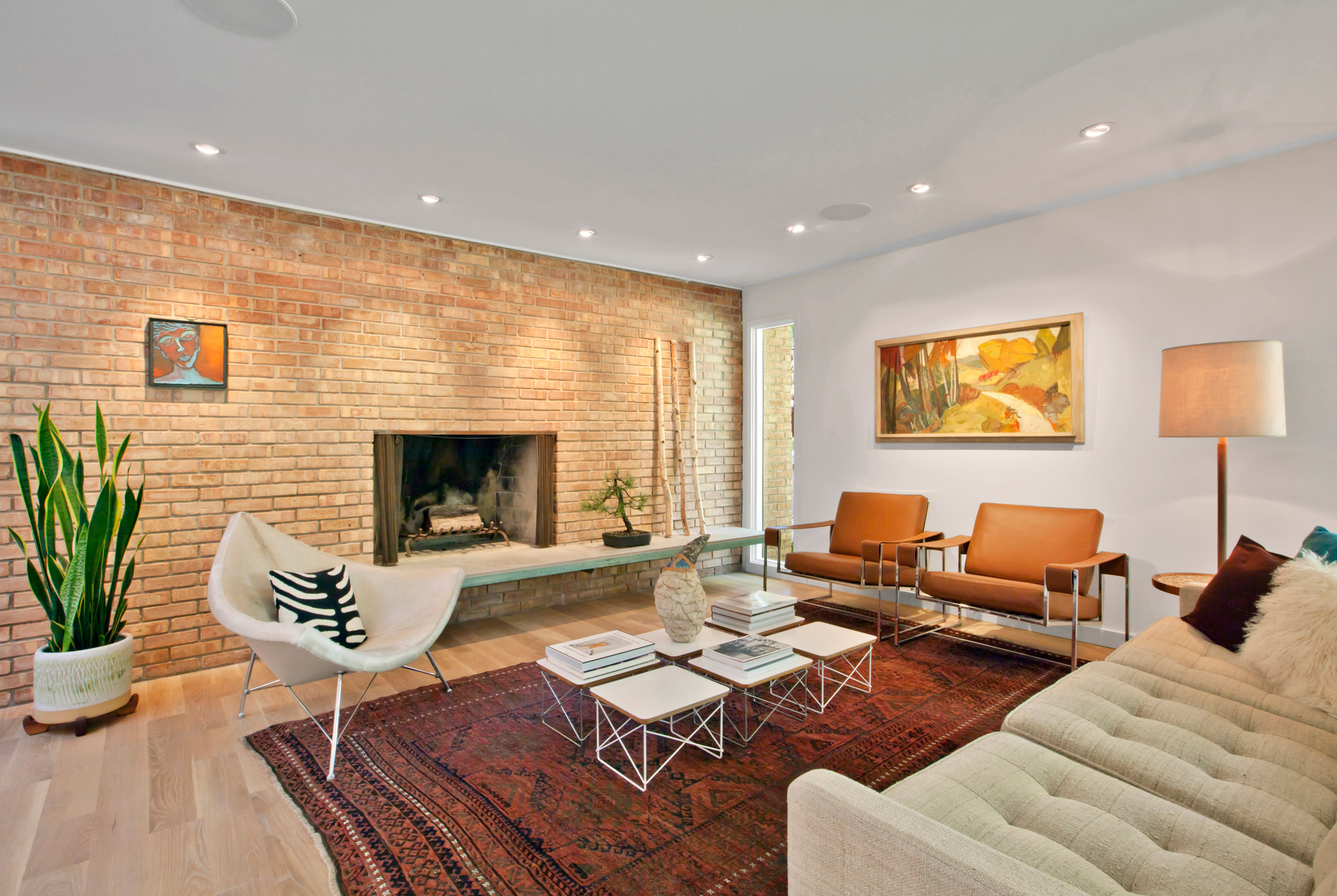 “This house needed everything,” said the architects. “The wooded site and location in the city was excellent, but the house was 60 years old with mostly original finishes and fixtures, including original cork floors, and excellent examples of custom wood built-ins that didn’t fit the new vision for refurbishment.”

Sitting atop a concrete foundation, the wood-framed home was re-clad in vertical-groove, poly-ash siding with a smooth finish. Strips of cedar with an ebony stain were used for the entrance area and a dog run. 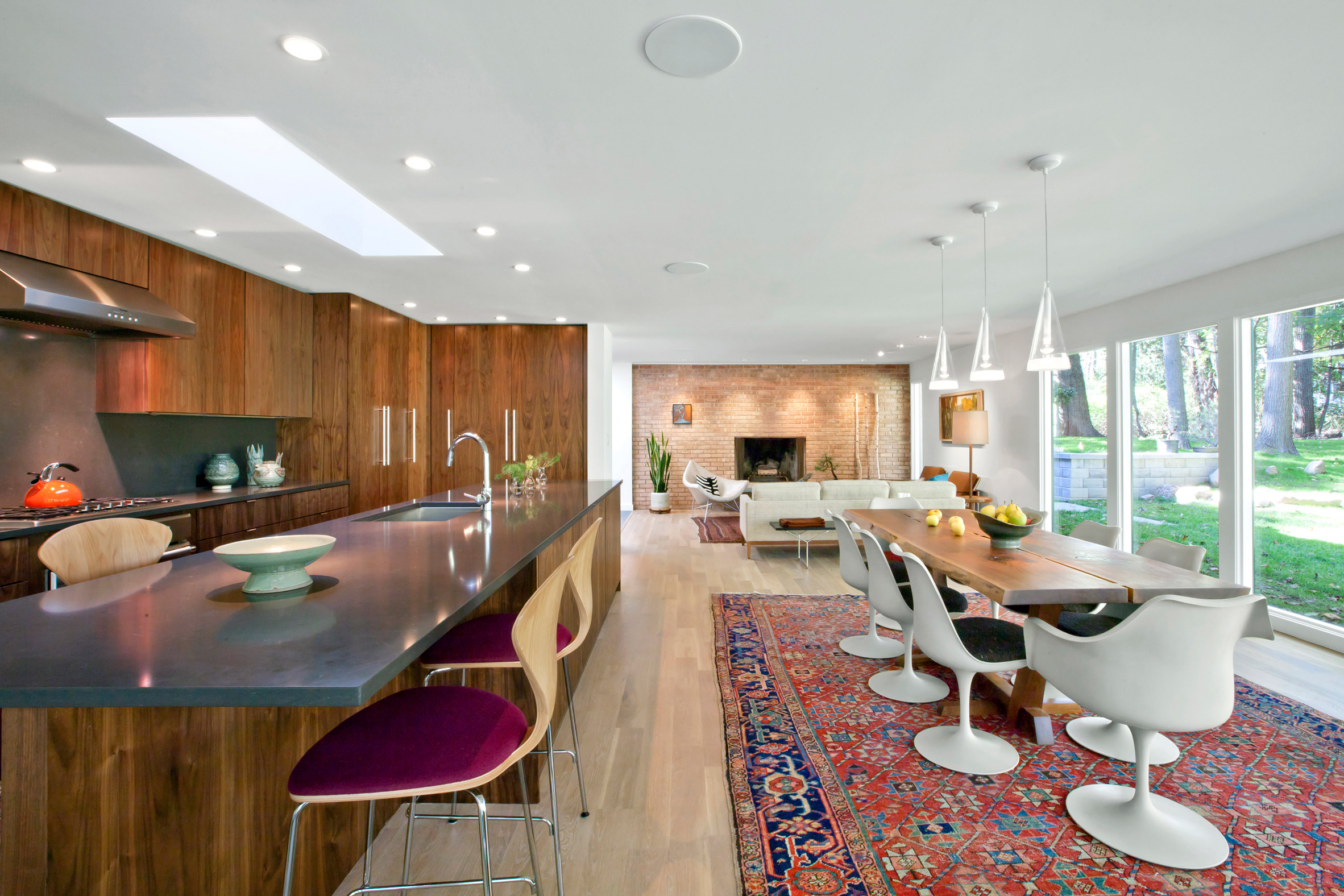 The team installed a new membrane roof that channels stormwater to “rain chains” on the side of the home. Existing roof overhangs were retained and refurbished.

Haus revamped the main entrance, adding an “inside-out entry wall” that frames the entry sequence and a garden. The same-style wall fronts the bedroom wing, helping provide privacy and security while still allowing natural light to pass through large windows. 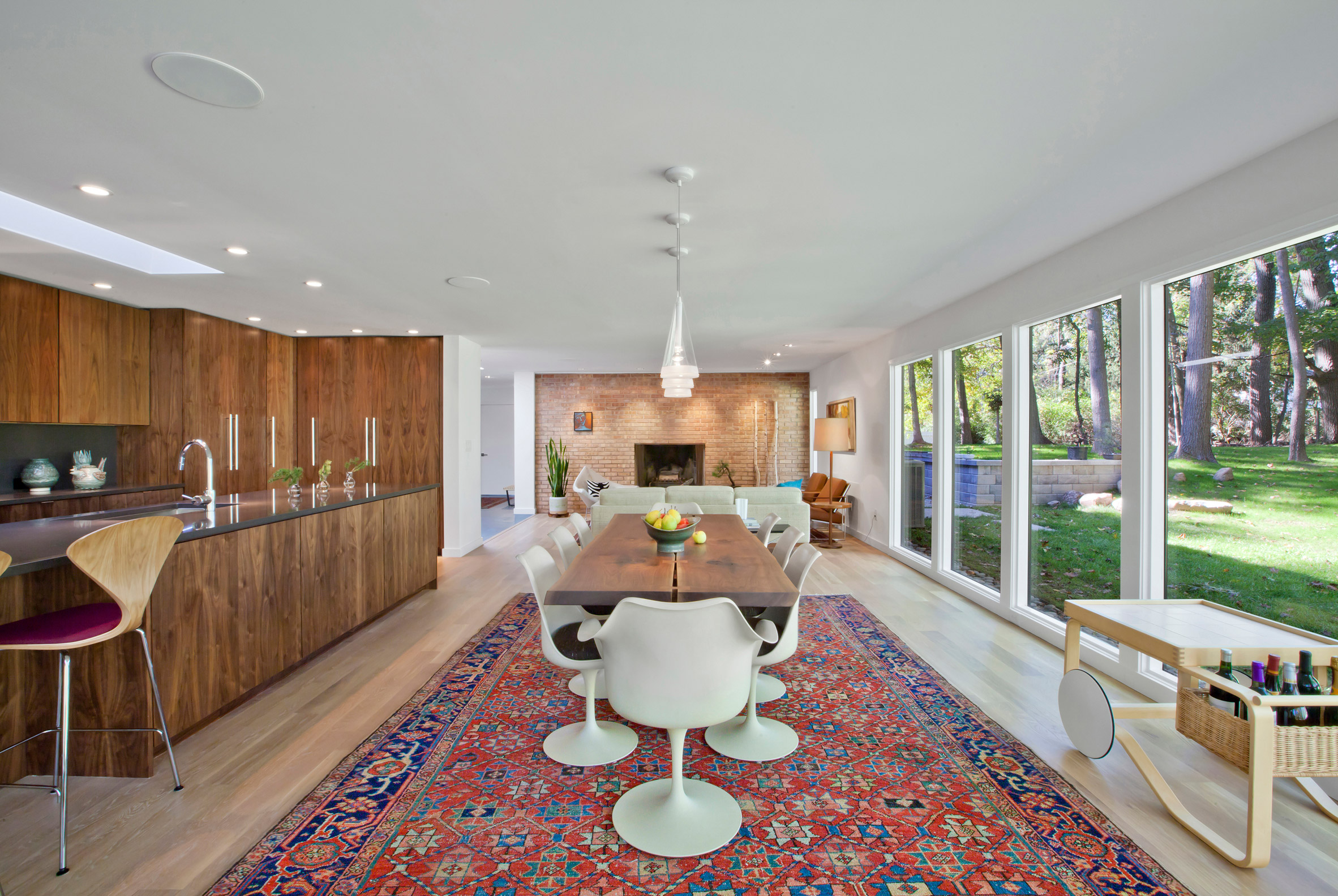 Inside, the team made a series of modifications. The entrance features slate tile flooring and a wooden wall that mimics the exterior cladding.

A new flexible area – dubbed the “everything room” – was added just off the foyer and serves as a mudroom, dog area, laundry room and a crafting workspace. In total, the team added 340 square feet (32 square metres) of space to the residence. 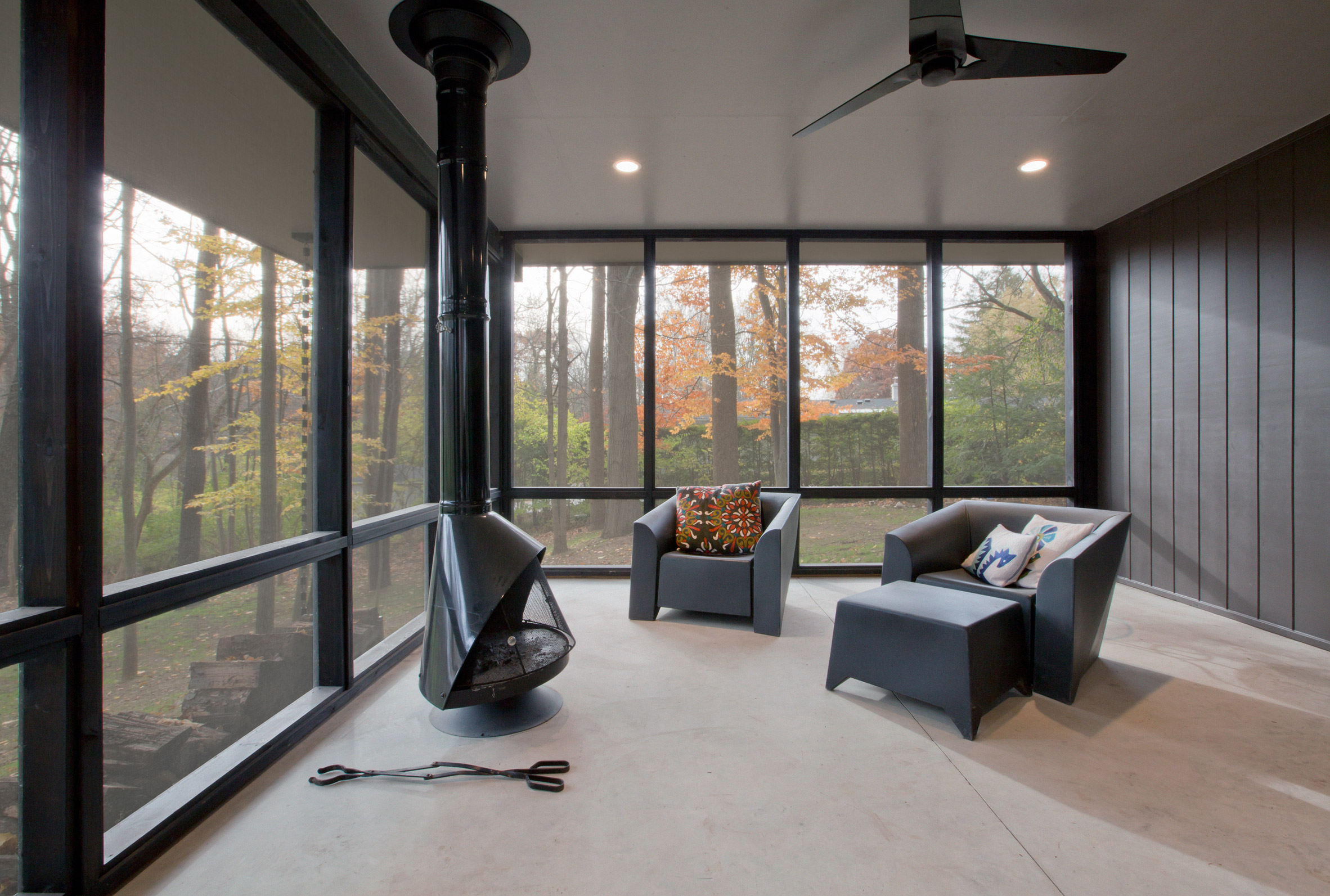 The open-plan living room features an original brick fireplace with a cantilevered concrete hearth. The room is fitted wood flooring, white walls and an eclectic mix of decor. Similarly, the kitchen and bedrooms feature a range of motifs and materials.

“A mix of period and more modern furnishings pair nicely with the interior finishes, lighting and fixtures to achieve a re-imagined interior respectful of the home’s roots and reflective of the owners’ aesthetic and lifestyle,” the team said. 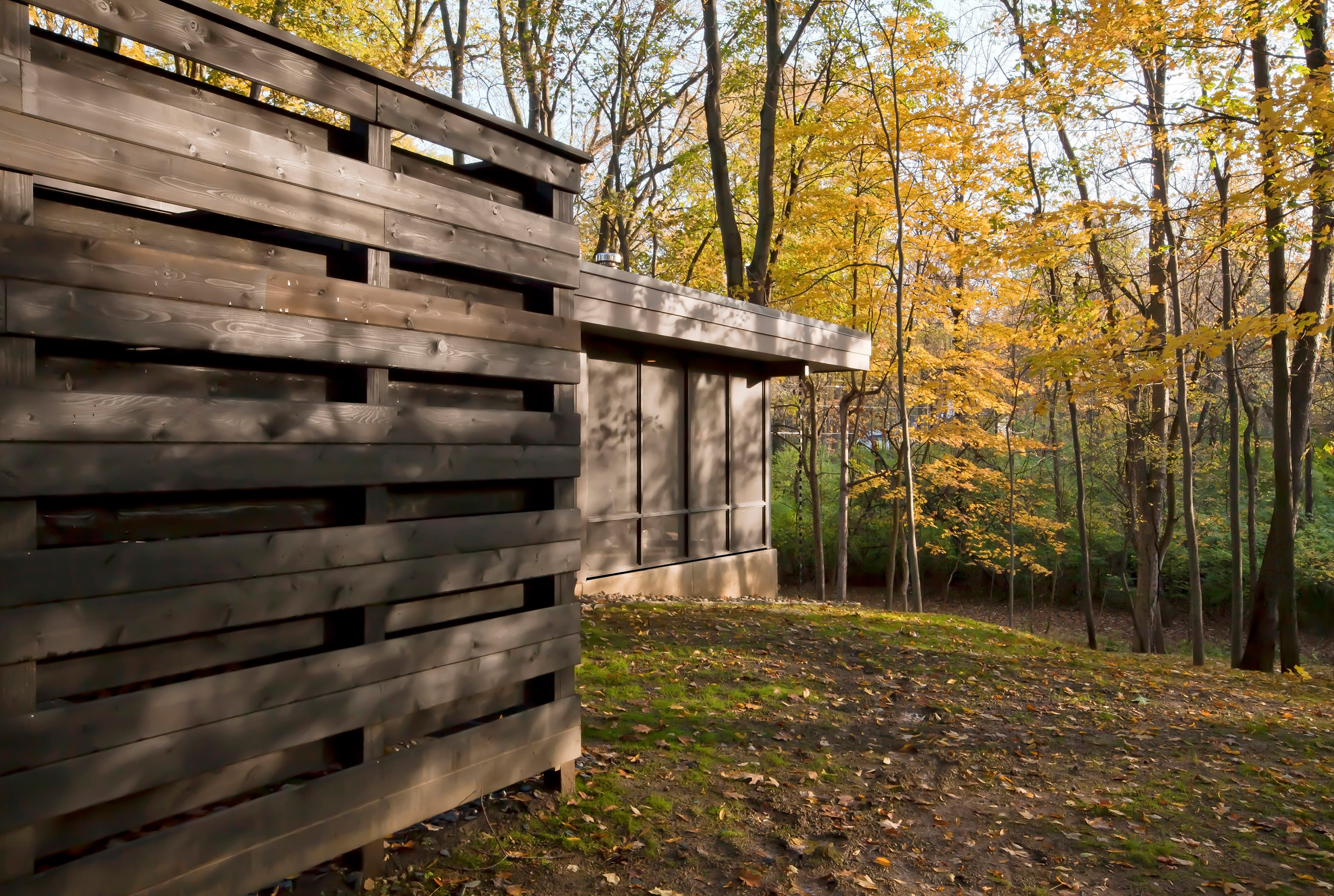 Throughout the residence, floor-to-ceiling glass provides unobstructed views of the verdant lawn and surrounding woods. A screened porch with a black stove serves as a sheltered area for relaxing and feeling connected to the outdoors.

The team also modified the landscape around the dwelling. Trees and underbrush were strategically cleared to allow more natural light into the home, and modern hardscaping and vegetation, including a moss garden, help “articulate the indoor-outdoor connections”. 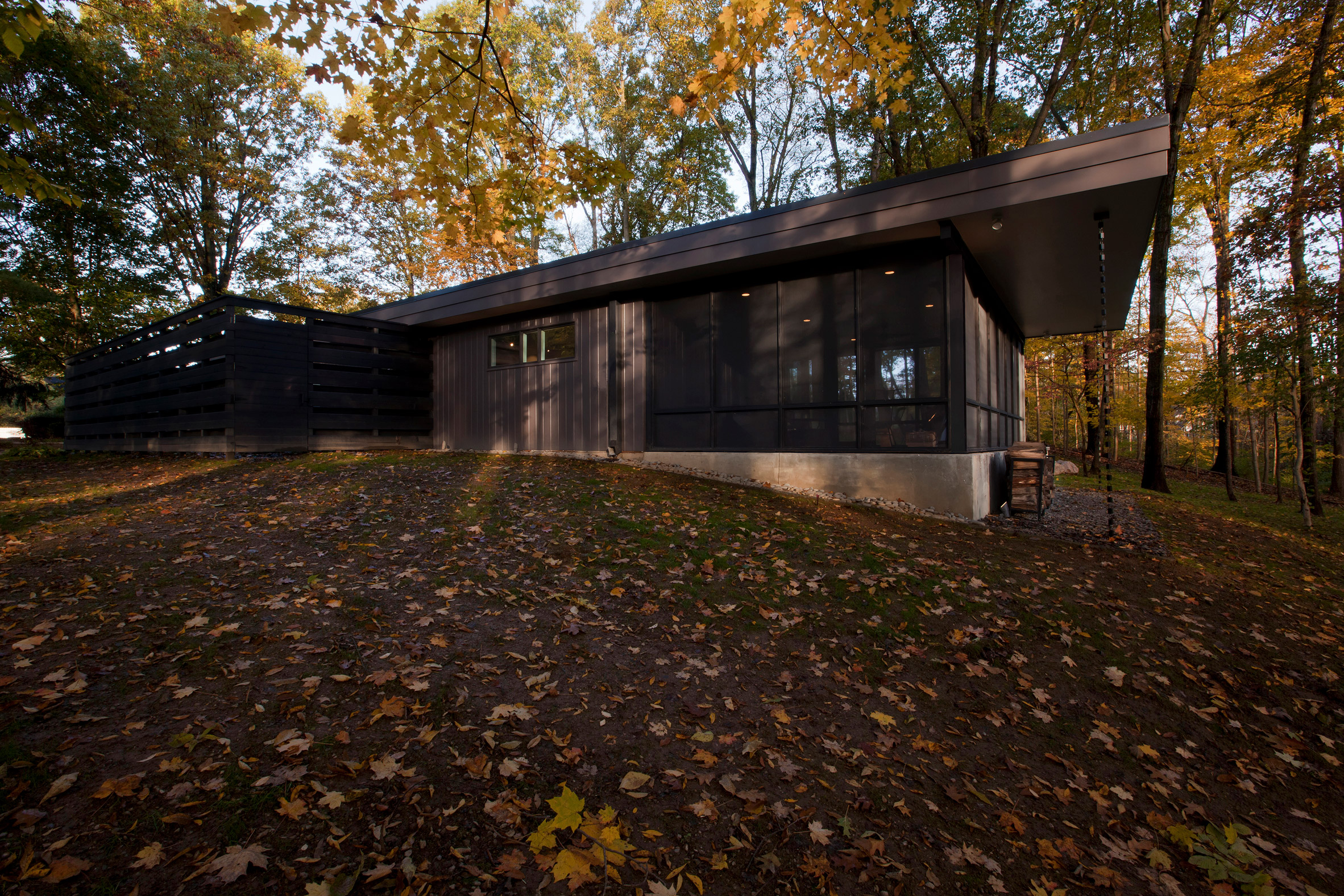 Indiana is an unlikely mecca for modernist architecture, but was spotlighted in a recent feature-length film set among the city of Columbus’ mid-century buildings. Also in the state, Fort Wayne boasts a set of gems by architects including Louis Kahn, Eero Saarinen, Michael Graves and more.

Photography is by HAUS Architecture For Modern Lifestyles 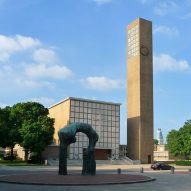