Henning Larsen has completed The Wave, a residential project on the Vejle Fjord in Denmark, according to the original vision of the practice’s late founder.

The opening of the building marks the end of an 11-year construction process, which began in 2006. For years just two of the project’s five residential towers stood complete, after the 2008 global financial crisis halted construction. 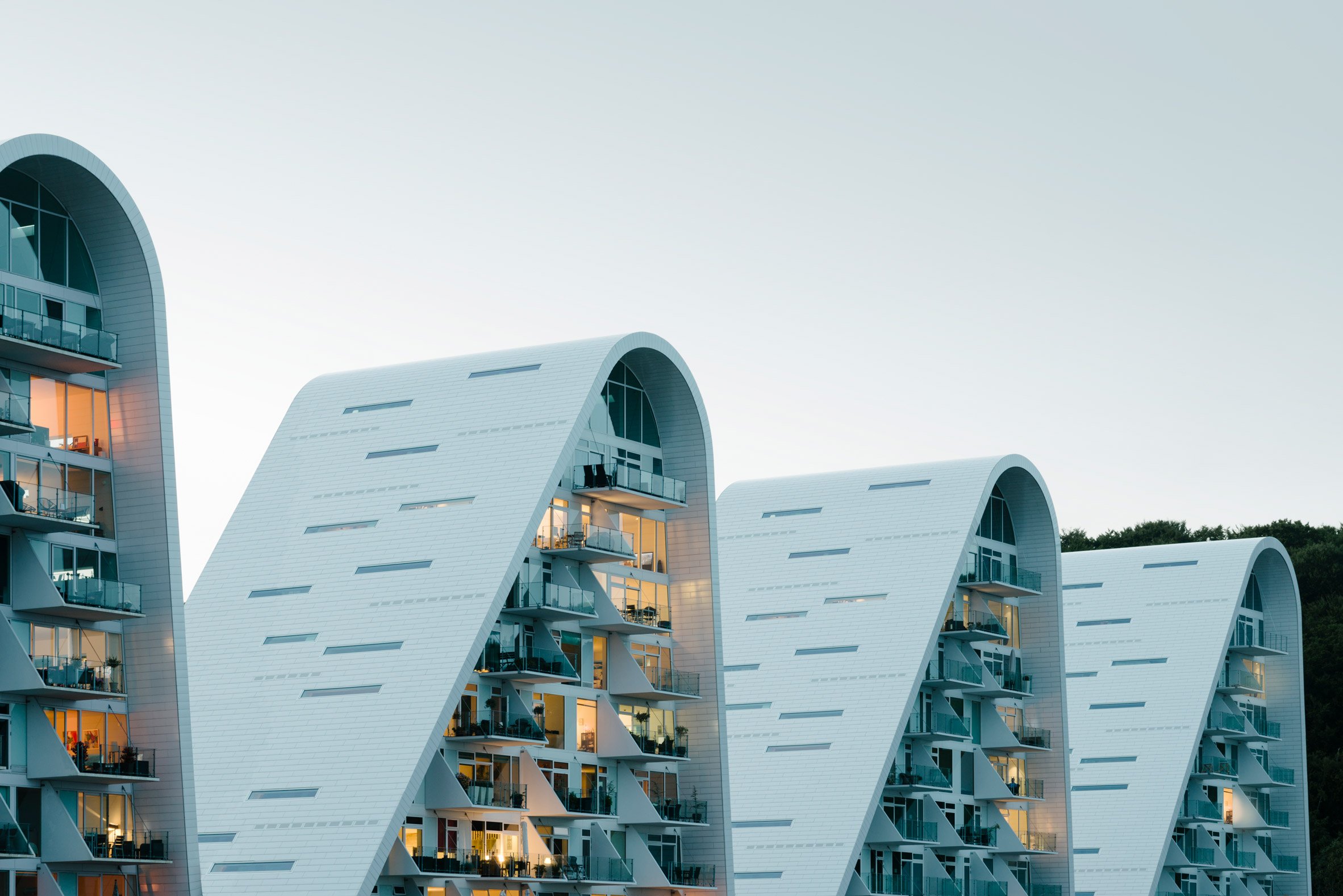 Work resumed in 2015, two years after Henning Larsen’s death in June 2013. Now the founder’s original vision for the project is complete, with the full complement of five crests running rollercoaster-like along the waterfront.

The Wave was designed as a new landmark for the town of Vejle in Jutland, and incorporates a public promenade along its eastern edge. In is near the Olafur Eliasson-designed Fjordenhus, which is the headquarters of Kirk Kapital. 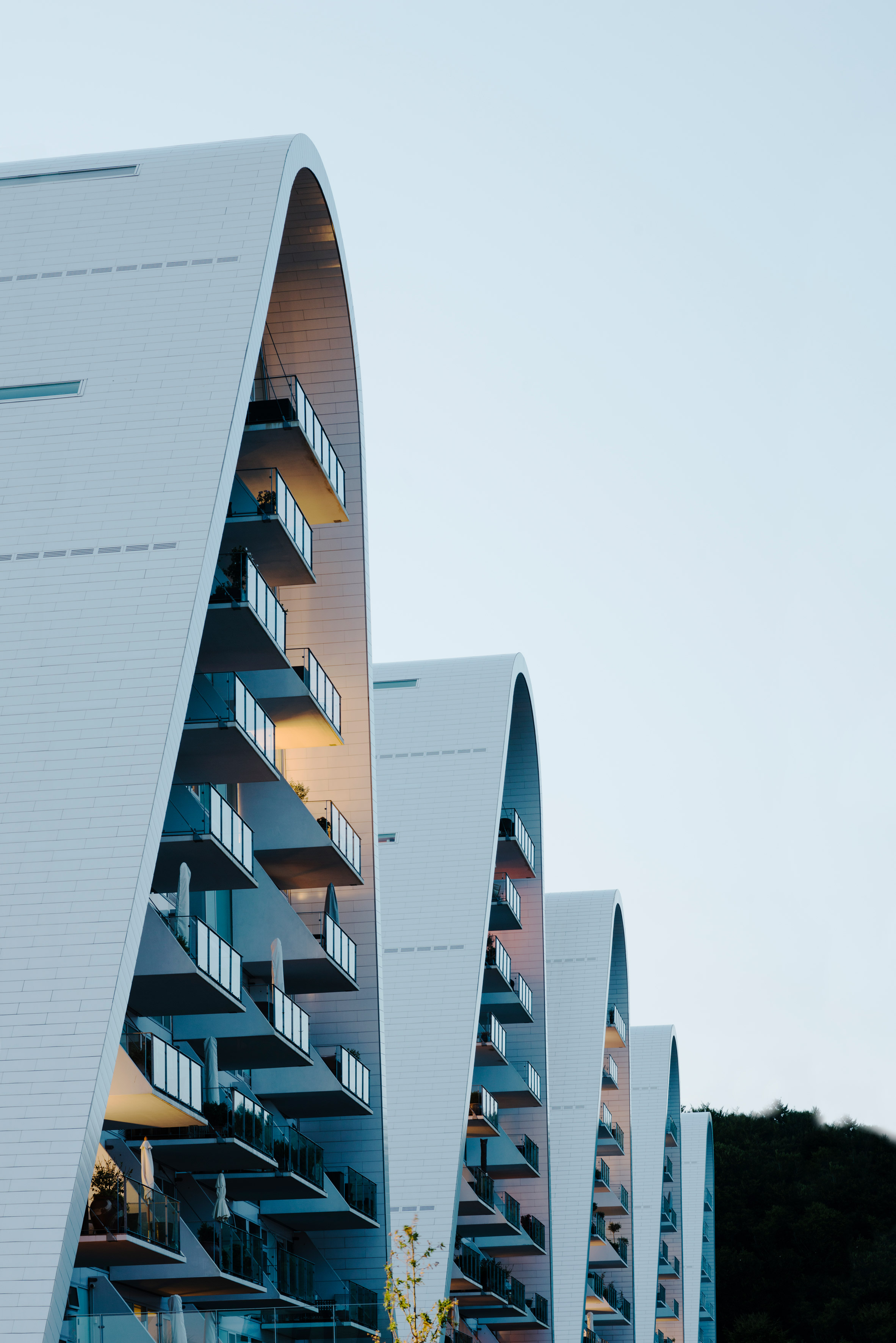 “The land surrounding Vejle is unique for its rolling hills, which are an uncommon sight in Denmark” said Søren Øllgaard, partner and design director at Henning Larsen.

“We designed the wave as a striking new presence on the Vejle skyline, one that reflects and embodies the surrounding area.” 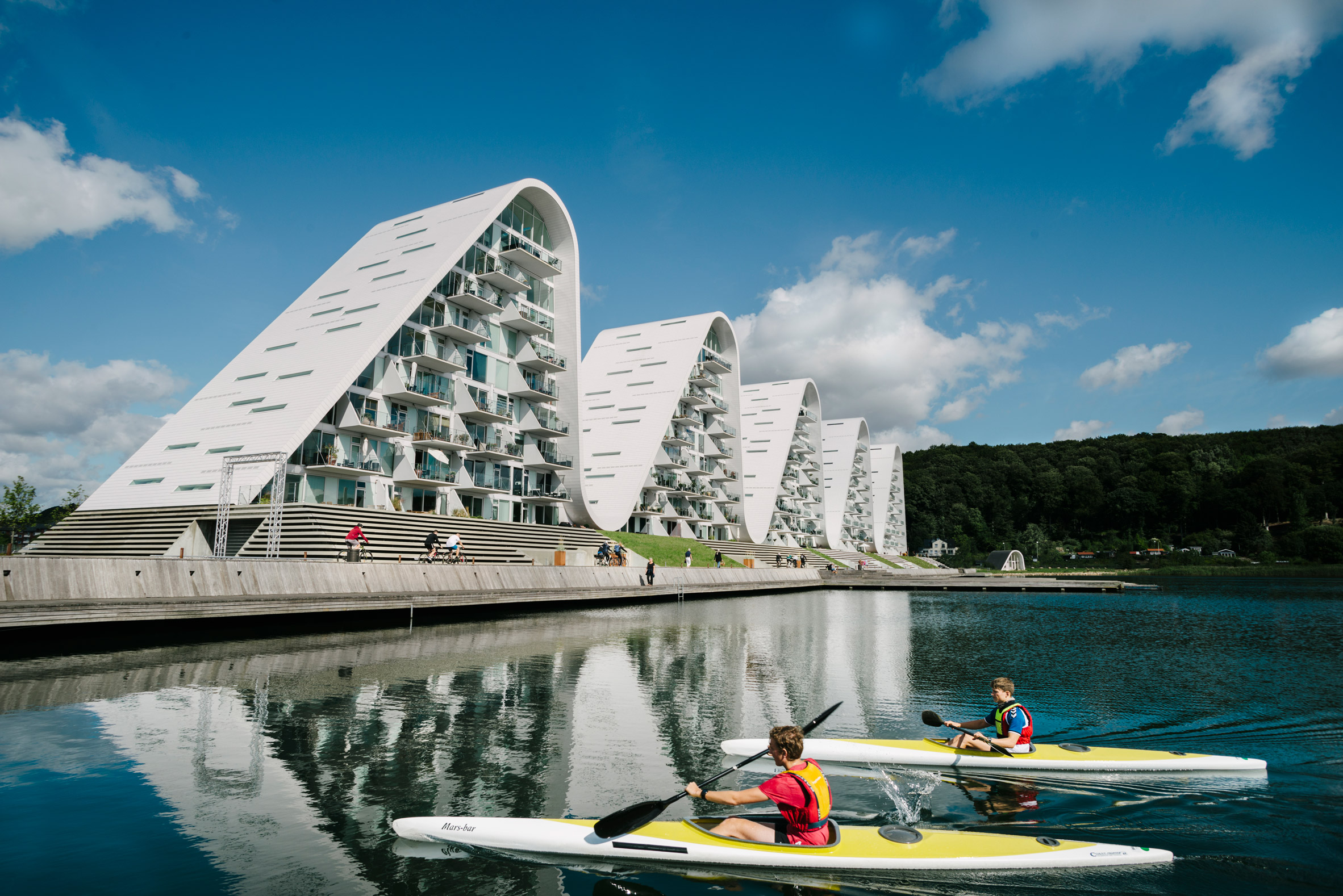 With a total area of 14,000 square metres, the scheme has 100 has apartments. Each tower has nine floors, the highest of which is a double-height penthouse apartment.

The “wave” itself is formed using panels of terracotta rainscreen cladding, providing the roof for each tower with what looks – from a distance – like a continuous white sheet. 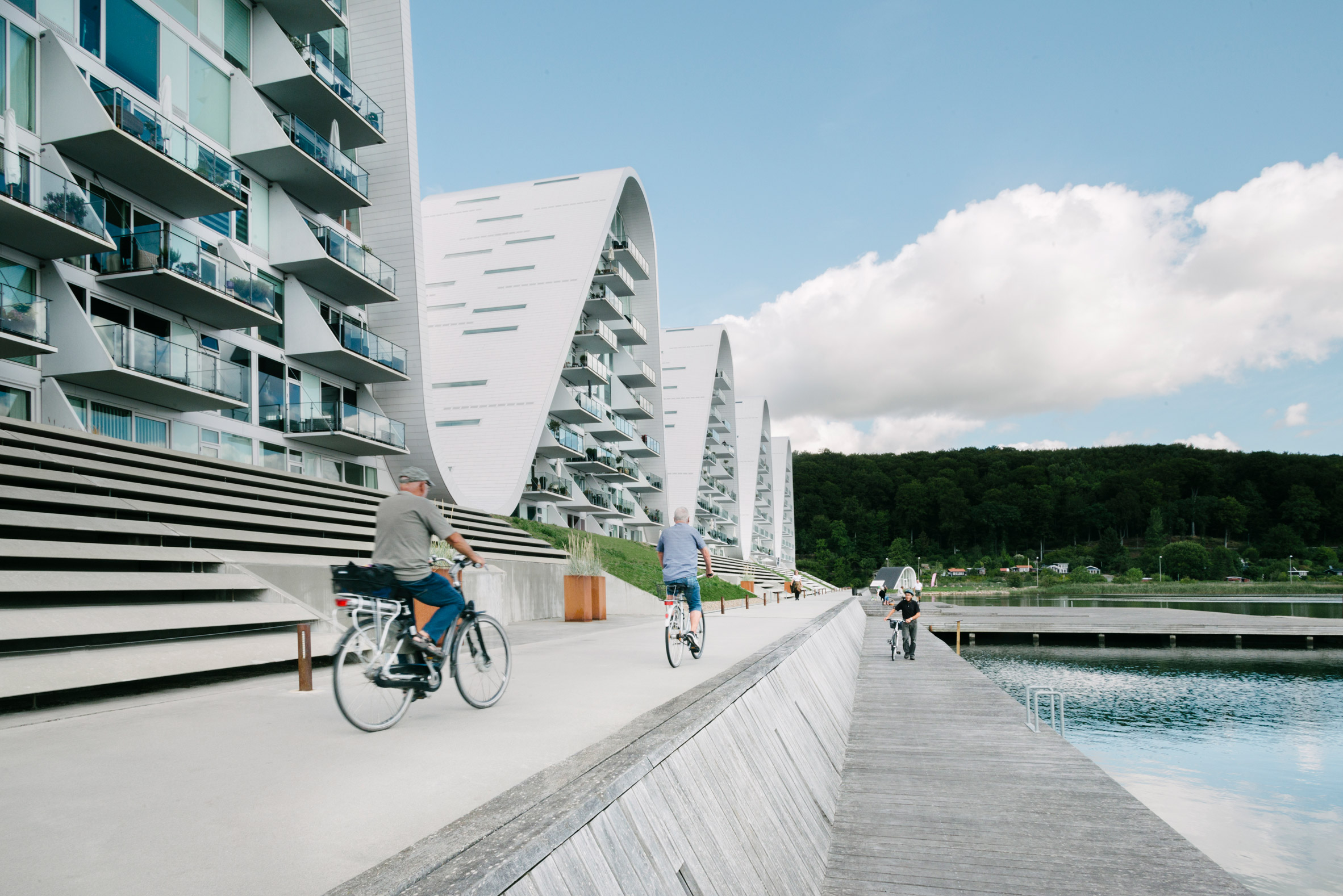 The lip of this wave creates an eave over the largely glazed facades, articulated with balconies for each apartment that are separated by privacy screens. Thin picture windows bring light into the apartments and form skylights on the top floors.

Interiors have been kept simple, focusing attention on the dramatic views of the Fjord to the east or the town to the west. Wooden floors have been used throughout, and extend out on to the balcony areas. 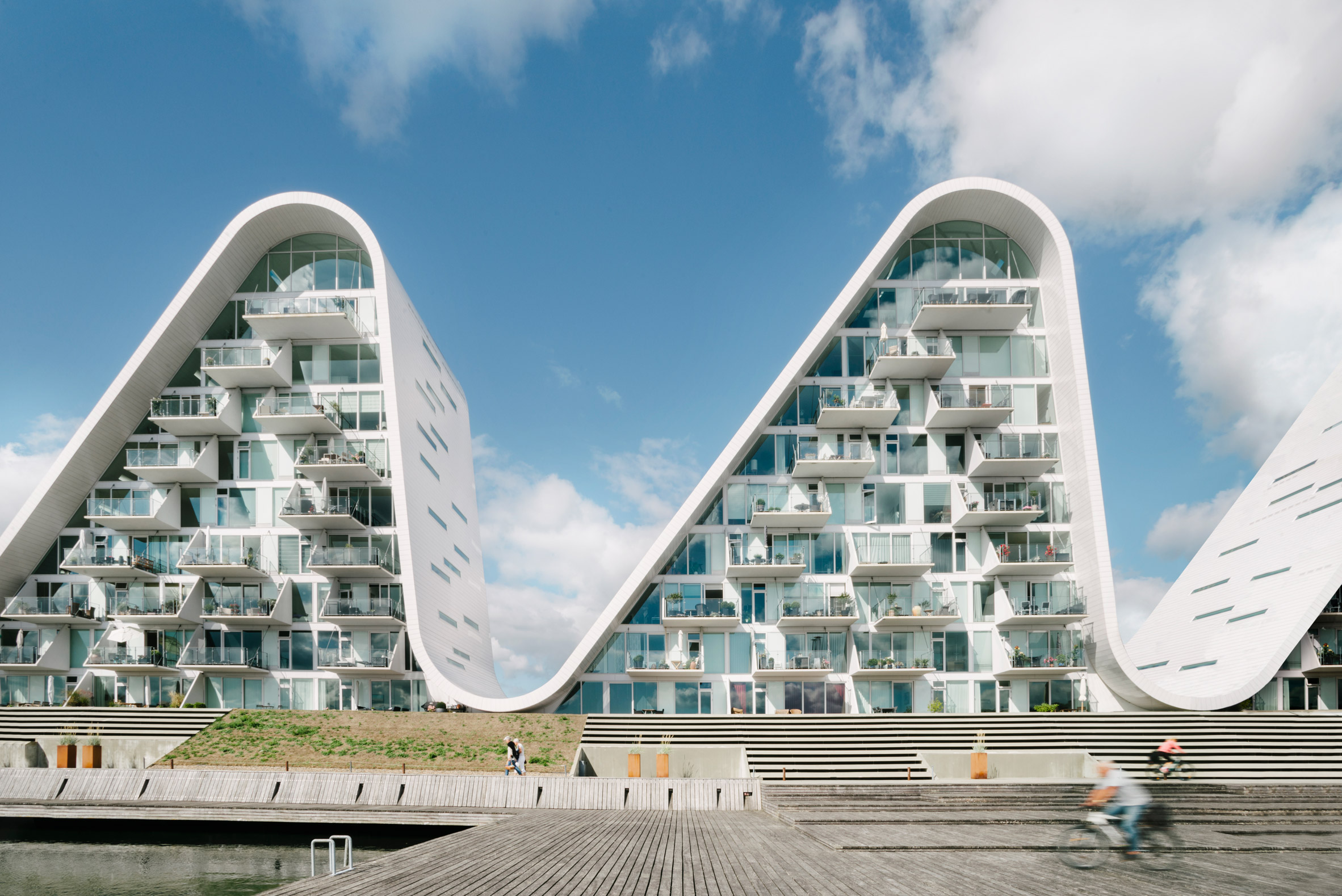 Beneath each tower, a large set of steps leads down to a public walkway, which then connects to a wooden decked area and small landing area for access out onto the water.

Even when only partially complete, the project was awarded Residential Building of the Year by Danish magazine Byggeri in 2009, an ABB LEAF award for innovative architecture in 2012, and a Civic Trust Award in 2013. 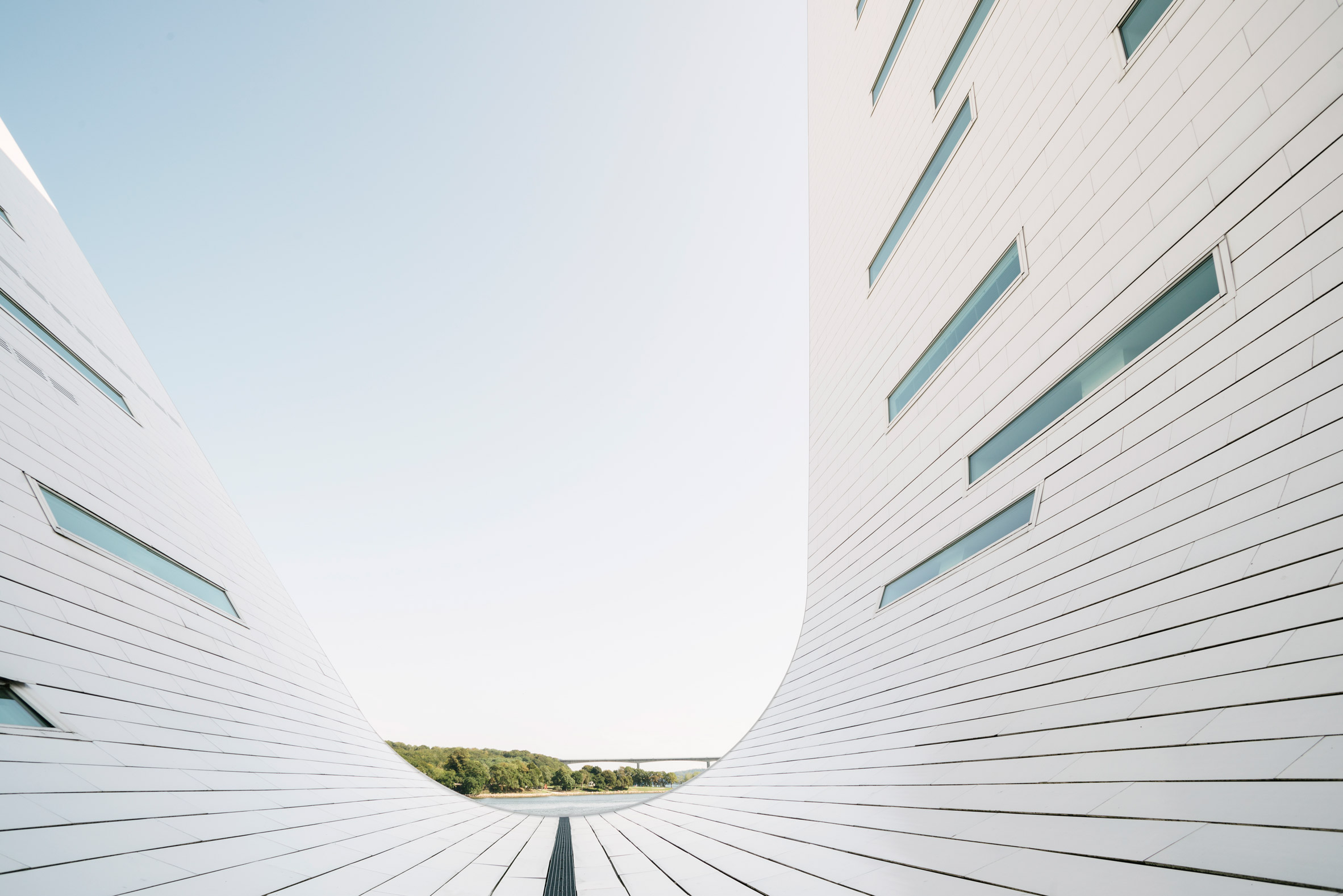 It is hoped that The Wave will kickstart the regeneration of the town’s waterfront, already home to a restaurant and rowing club.

“The Wave is an engine of revitalisation – a magnet for activity and community,” added the architecture studio. Henning Larsen has also recently completed the new Kiruna Town Hall, the first stage in the Swedish town’s wholesale relocation to avoid it being swallowed by an underground mine.

The Danish practice has also built a town hall that bridges a river on the Faroe Islands, and revealed their designs for a £400 million masterplan for Belfast’s waterfront.

Photography is by Jacob Due.