Named Bibo Ergo Sum, which translates from Latin as “I drink, therefore I am”, the bar is the first to open in West Hollywood’s recently revamped Robertson Plaza.

The area was formerly a bustling spot for shopping and dining, but was eclipsed by nearby Melrose. Entrepreneur Tait Forman decided to open a drinking spot where locals could sip cocktails from an ever-changing menu in a relaxed but quirky setting. For the interior, Home Studios used a wide-ranging variety of references. The architecture of 1900s Vienna, graphics from vintage French film posters, the work of Finnish designer Alvar Aalto and the aesthetic of 1967 movie The Graduate were all cited by the firm as influences. “We want guests to feel transported into a setting that feels both of the future and familiar at the same time,” said Home Studios founder Oliver Haslegrave.

“Everything from the rigid symmetry of the space, to the strict colour palette, to the tinted lighting and glass, as well as the blacked-out ceiling are meant to create an experience as transportive as a trip to the cinema.” 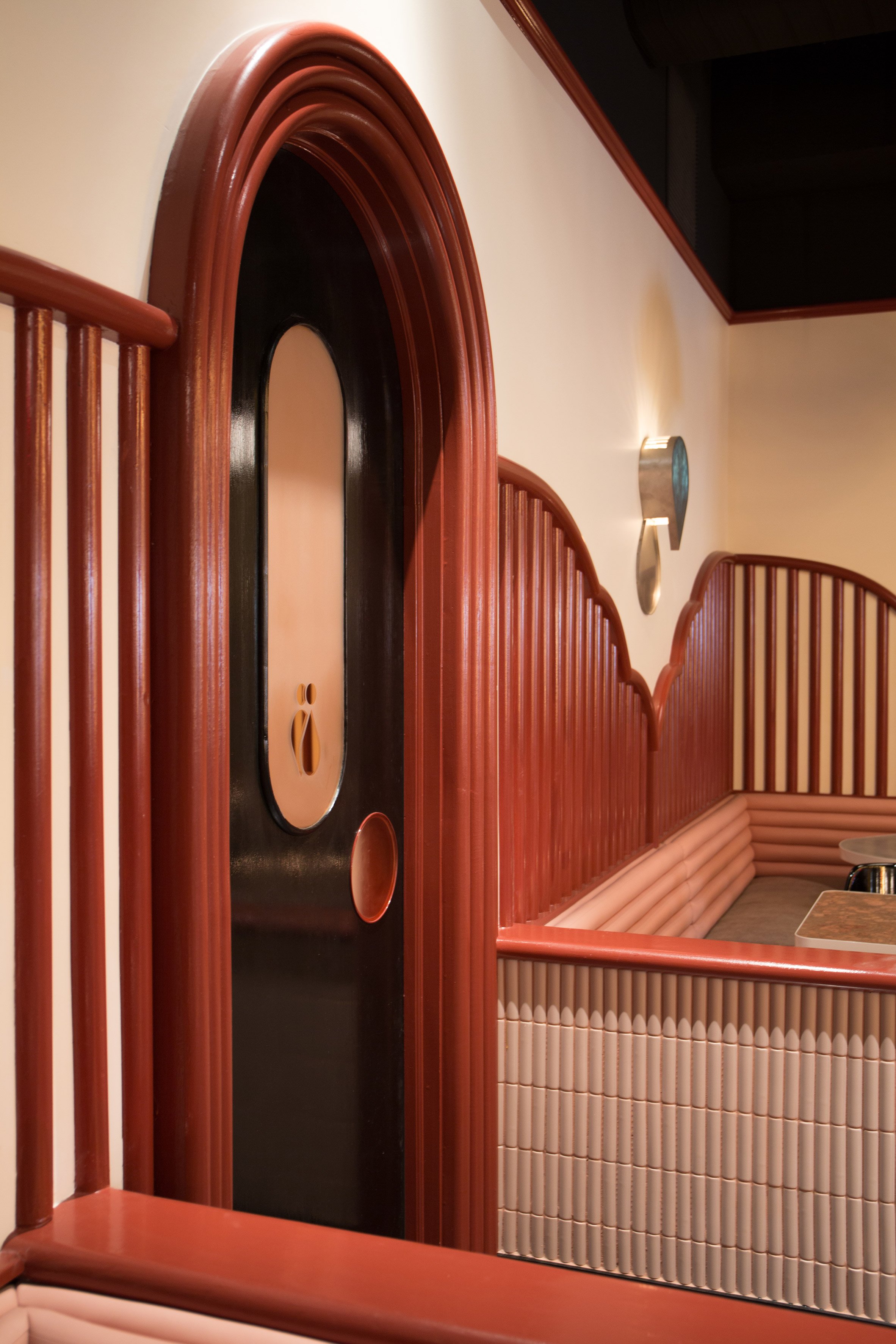 The horseshoe-shaped bar is situated in the middle of the room, circled by high stools. At the back, a shelving system for displaying liquor bottles has a curving shape reminiscent of art deco motifs, and its outline is illuminated. In all four corners, booth seating is formed by semi-enclosed areas. These are lined with ribbed cushioning coloured light pink, forming backrests for the built-in seating.

In between, high wall-mounted tables for two each have their own mirrored backdrop and domed pendant lamp above. Dado railings are used to wrap the room at two heights and frame the arched door to the bathrooms at the back. Raised vertical stripes in the same hue pattern the sandy-coloured walls above the booths at the back.

Other details include teardrop-shaped sconces with pearlescent green fronts and translucent glass partitions held between stripy marble cylinders on both sides of the entryway. All of the furnishings and fixtures are custom designed and made for the space.

“The result is a dynamic blend of surreal details, unexpected materials and dramatic proportions that deliver a completely unique aesthetic,” said a statement from the bar, which opened 17 November 2017.

The strict symmetry at Bibo Ergo Sum is reminiscent of the cinematic style of film director Wes Anderson, who has seemingly influenced many interior designers of late – and who also created his own bar at the OMA-designed Fondazione Prada in Milan.