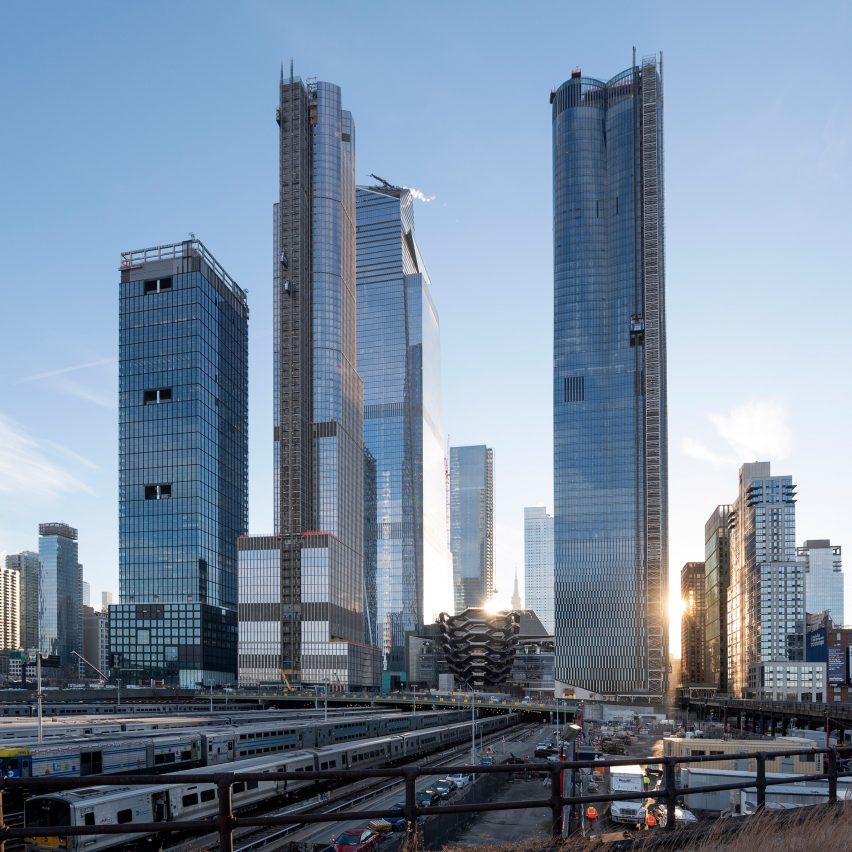 This past weekend, the public gained access to much of the first phase of the vast Hudson Yards development on Manhattan’s Far West Side, one of the island’s last major swaths of developable land, now outfitted with trophy architecture, an enormous mall, a new public plaza, and several spaces seemingly designed for Instagram.

Developed by the Related Companies and Oxford Properties, Hudson Yards is an architecture of advanced capitalism, and, through its design and programming, it communicates its purpose clearly to the public. What does it tell us?

The Far West Side has always been Manhattan’s service entrance, a warren of loading docks, highway channels and exit ramps, gritty and mostly charmless. Hudson Yards makes these conditions worse.

Hudson Yards has turned 30th Street from 10th Avenue to the West Side Highway into a series of parking garage  and loading dock entrances. The 10th Avenue-facing side presents a blank metal wall adorned with an enormous illuminated sign for Neiman Marcus, the Dallas-based luxury department store making its debut in Manhattan.

Hudson Yards is not for us, because it avoids the street. It walls itself off from the vitality of one of the world’s great cities. The city-facing side of the development fronts 10th Avenue, but Hudson Yards offers no direct access. Rather, one must enter the mall and glide a full two stories up to reach the “plaza” level, offering retail tenants a captive audience to which to market.

The mall, designed by Elkus Manfredi, does what malls do. It slows, confuses, and isolates by design. At five storeys (above the two-storey base) it is a warren of escalators, which don’t follow a predictable pattern. One gets off and then must assess how one gets back down or goes up an additional floor.

Site lines are not clear, and the spaces are largely windowless, so you could easily get turned around, a well-worn tactic of the retail world that is meant encourage you to shop, whether you want to or not.

New York is facing a crisis of confidence

Perhaps the larger questions, is why the developers would choose to build an inward-facing urban mall when retail vacancies are rising, a process that is accelerating as e-commerce expands.

Hudson Yards is not for us, because it collects data on the people who live, work, and visit there in order to market to them. It views people as consumers, not as citizens. According to real-estate publication The Real Deal, Hudson Yards is collecting data on purchases, movements, and biometrics with kiosks, cameras, scanners, and proprietary apps.

Related is not currently obligated to say what it will do with this data. “The data is our data for the purposes of allowing us to make Hudson Yards function better,” Related president Jay Cross told the publication.

Hudson Yards is not for us, because it is a billionaire’s fantasy of the future of city life. Architecture is slow, and Hudson Yards was conceived by the administration of Michael Bloomberg and built by Stephen Ross, the chairman and majority owner of Related Companies.

The two men believed, and apparently still believe, that catering to an ultra-luxury consumer magically benefits everyone. Bloomberg famously said in 2013: “If we could get every billionaire around the world to move here, it would be a godsend.”

But the tides have turned.   New York is facing a crisis of confidence, its leaders having neglected its infrastructure and its public realm for so long that its basic systems (the subway, the streetscape, subsidised housing) are breaking down. Income inequality has reached levels not seen since the 1920s.

Hudson Yards is blandly impressive thanks to its gigantism

The public has had enough, and now the city and state are considering a pied-à-terre tax on non-primary residences over $5 million to raise funds to shore-up the subway.

As a place, Hudson Yards is blandly impressive thanks to its gigantism and the numbing acreage of blue reflective glass that stretches into the sky. Diller Scofidio + Renfro‘s unfinished building, The Shed, is the most intriguing (it opens to the public next month), yet its vast rolling roof and muscular structure are swathed in a cheap-looking grey ETFE skin resembling dirty bubble wrap.

Though The Shed bills itself as “a new art centre for the 21st century,” it has also long been rumoured to be the future home of New York Fashion Week, another blurring of culture and commerce.

Then there is Heatherwick Studio’s Vessel, a colossal viewing platform/bundle of staircases clad in shiny golden panels. Next to the repurposed industrial infrastructure of the adjacent High Line park, the Vessel is a piece of urban costume jewellery, a gawdy bauble without purpose beyond shallow adornment.

The plaza, designed by Nelson Byrd Woltz, seems intended to discourage lingering or relaxation. Currently devoid of benches or chairs, the plaza is ringed by swirls of stone-walled planters, which create paths that lead nowhere and are, perhaps, intended to disguise the plaza’s awkward sloping grade changes as you move toward the Hudson River (the next phase of Hudson Yards will extend from 11th Avenue to the West Side Highway).

The whole thing is ringed by a bollard-protected driveway for black cars and Ubers headed to Neiman’s (the degree to which cars are prioritised throughout the development is another instance of surprisingly out-of-date urban thinking).

Of the towers, SOM attempts to break up the monotony of reflective glass by mixing bands of limestone into the curtainwall of its mixed-use building, creating a pleasing texture and variety at plaza level. At a distance, however, the limestone is too subtle, so the building appears to have an all-glass curtainwall just like its neighbours. Subtlety difficult to achieve in a 92-storey building.

It needs more vision, more backbone, and more courage, to create a 21st-century city that reflects and serves its citizens with equity and dignity.

Alan G Brake is a design journalist, editor, and critic. Formerly US editor for Dezeen, he has also been executive editor of The Architect’s Newspaper and has written for titles including Metropolis, Architectural Record and the New York Times.

The post “Hudson Yards is a billionaire’s fantasy of the future of city life” appeared first on Dezeen.