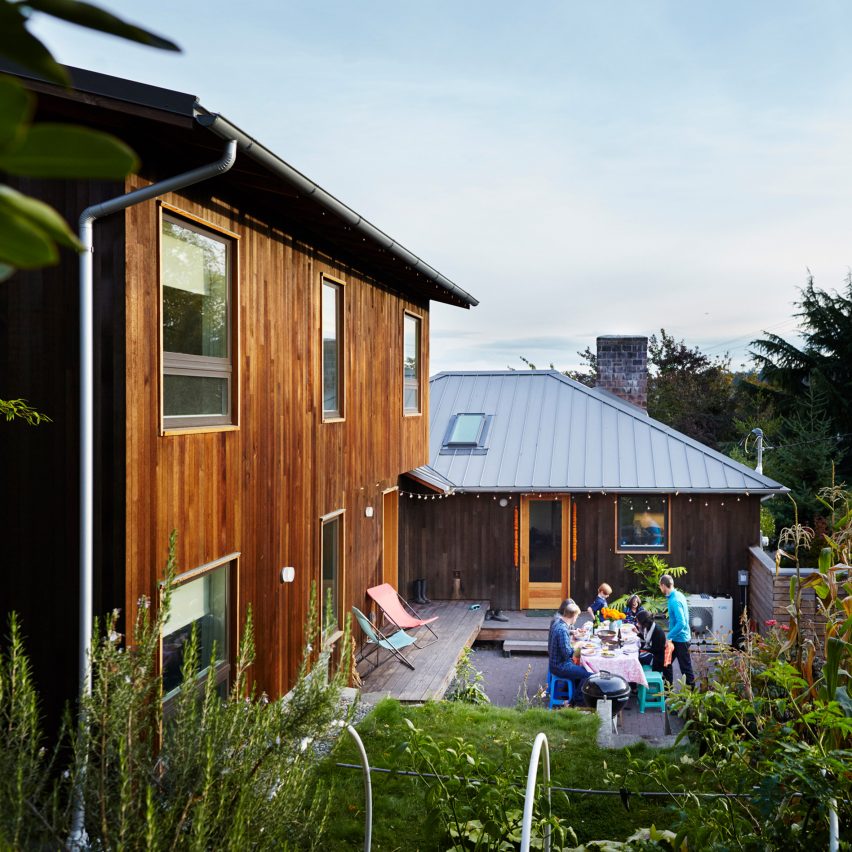 Cedar cladding and handmade decor are among the features in a Seattle bungalow that was revamped by its owners – architect Sharon Khosla of local firm Fivedot and furniture designer Chris Armes.

The project’s name, Central Area Home, stems from its location in the city’s Central Area neighbourhood, a residential district that lies just east of downtown.

The project was designed by Khosla and Armes, who are founders of the custom furniture company 16th Workshop. Khosla is also a principal at Fivedot, a local architecture firm. The husband-and-wife team have two young children.

Years ago, the couple purchased a decent-sized lot in the neighbourhood with a 1950s bungalow totalling 825 square feet (77 square metres).

Their intent from the beginning was to add an extension, along with creating a backyard that suited their family’s love of gardening, cooking and spending time with relatives and friends.

“While the original house was small, the property had a lot of potential for an addition, as well as a large garden,” the team said.

The couple ultimately decided to construct a two-storey extension and a rear courtyard, along with refreshing their existing bungalow. They placed an emphasis on daylight, natural materials and durability.

“With the belief that the most sustainable building strategy is to build well, the same care was put into the construction of the house as the owners put into their furniture,” the team said.

The extension – which encompasses 1,200 square feet (111 square metres) – is rectangular in plan. The ground level encompasses a family room and main suite, while the upper floor holds two bedrooms.

In the existing home, the team knocked down walls to achieve an open floor plan.

With the bedrooms now located in the addition, the original dwelling became a public zone that contains a dining room, kitchen and library. A pair of skylights bathe the area in natural light.

Throughout the expanded dwelling, the team used earthy materials and neutral colours. All of the interior woodwork – and much of the furniture – was created by Khosla and Armes.

In the kitchen, the team installed white oak cabinetry and handmade tile flooring. Suspended over an island is a skylight adorned with live orchids.

Other interior elements include pendants in the dining area from London’s Hand and Eye Studio, and bedroom dressers by Armes made of Oregon black walnut.

In the rear of the home, the team created a wooden deck that steps down to a brick-paved courtyard. Surrounding the outdoor gathering space is a small lawn and a flourishing garden.

On both the addition and existing home, the team installed exterior insulation and a rainscreen capped with vertical cedar boards. The buildings are topped with standing-seam metal roofs.

The family lived in the home throughout the construction process. The addition was completed first, and then work began on the original dwelling.

“The decks in the courtyard were built with the addition and allowed us to have an outdoor kitchen when that portion of the house was out of commission,” said Khosla. “Luckily this happened during the spring and summer seasons.”

Other homes in Seattle that have been revamped include a 1960s dwelling that was designed by MW Works to have a stronger connection to the outdoors, and a mid-century dwelling that received major overhauls by the firm SHED, including a new indoor pool.

Photography is by Daniel Bernauer.