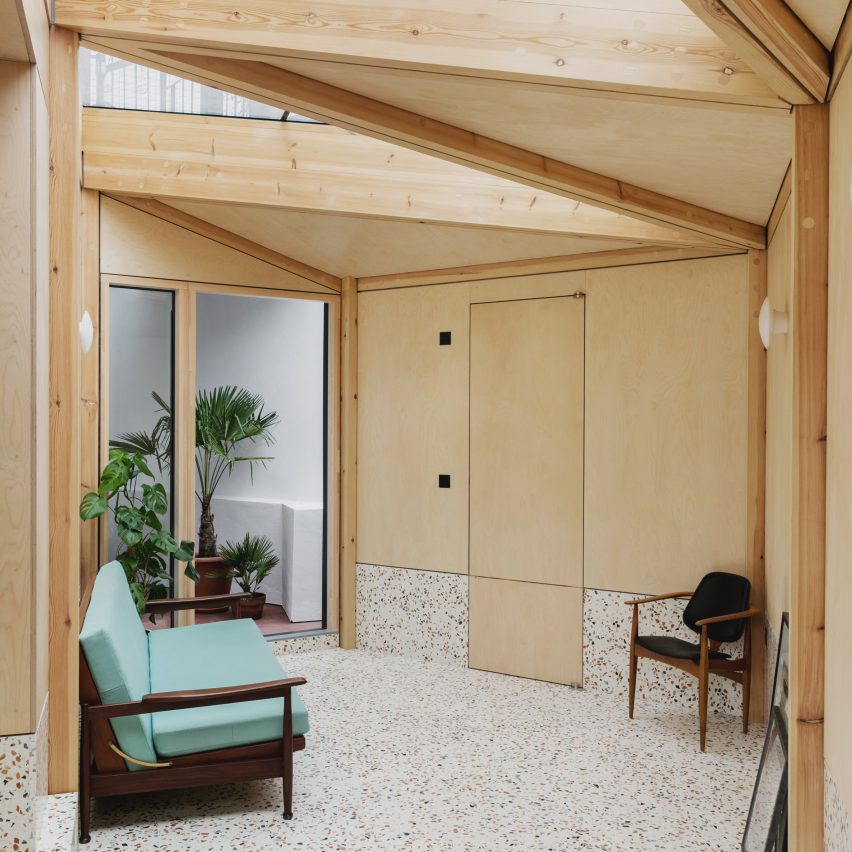 Triangular skylights meet terrazzo floors in this quirky extension that architecture studio IF_DO has added to the Montague Court flat in east London, which occupies a former synagogue.

Located in the neighbourhood of Dalston, the flat has been extended by architecture studio IF_DO to create a “lofty, dynamic, and unexpected space”. 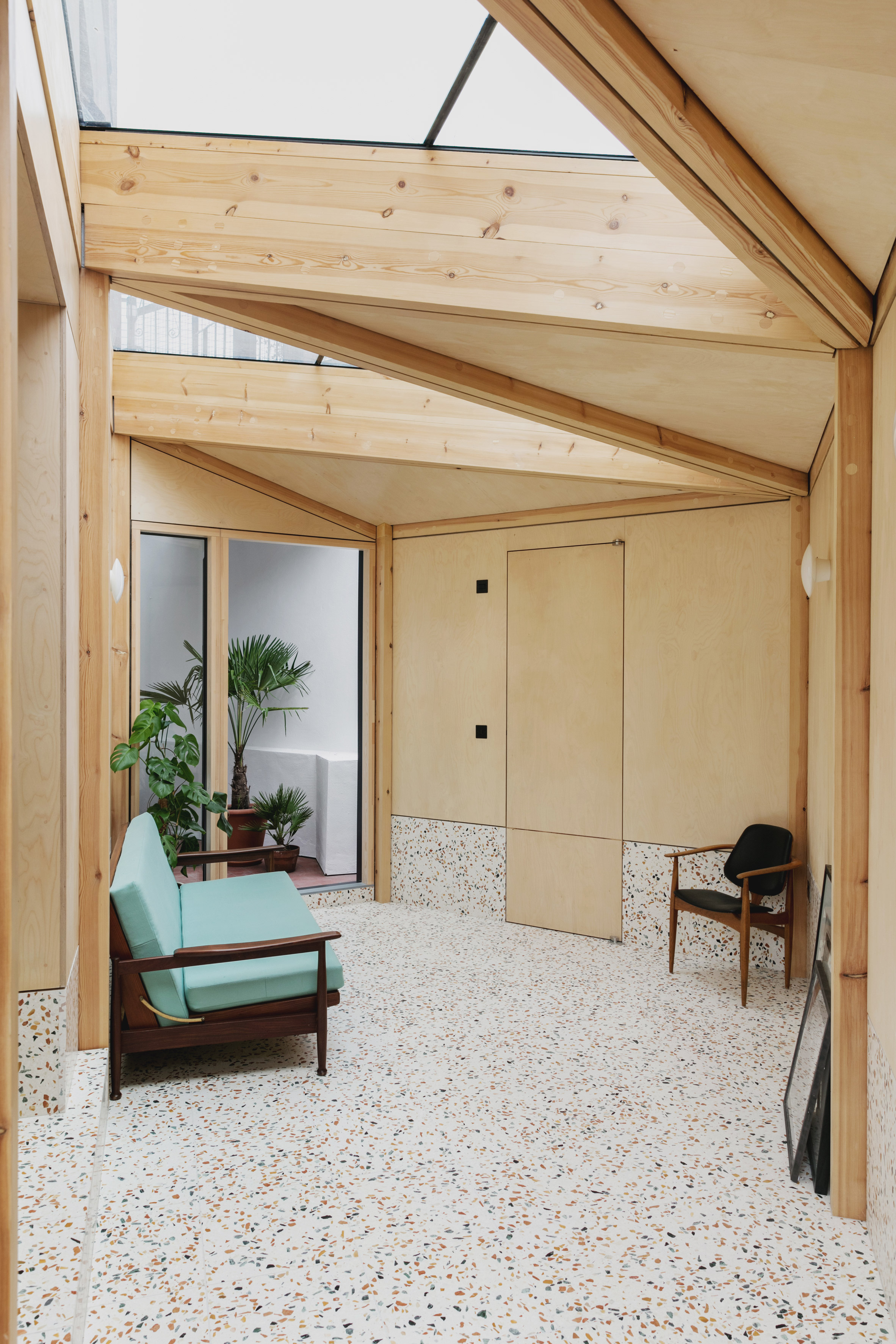 The ground-floor flat is set inside an octagonal building that was a synagogue at the beginning of the 19th century, before being turned into housing in the 1990s.

Its unusual eight-sided floor plan is what inspired the studio to create a geometric extension for the homeowners, who wanted an additional room where they could host overnight guests or work from home. 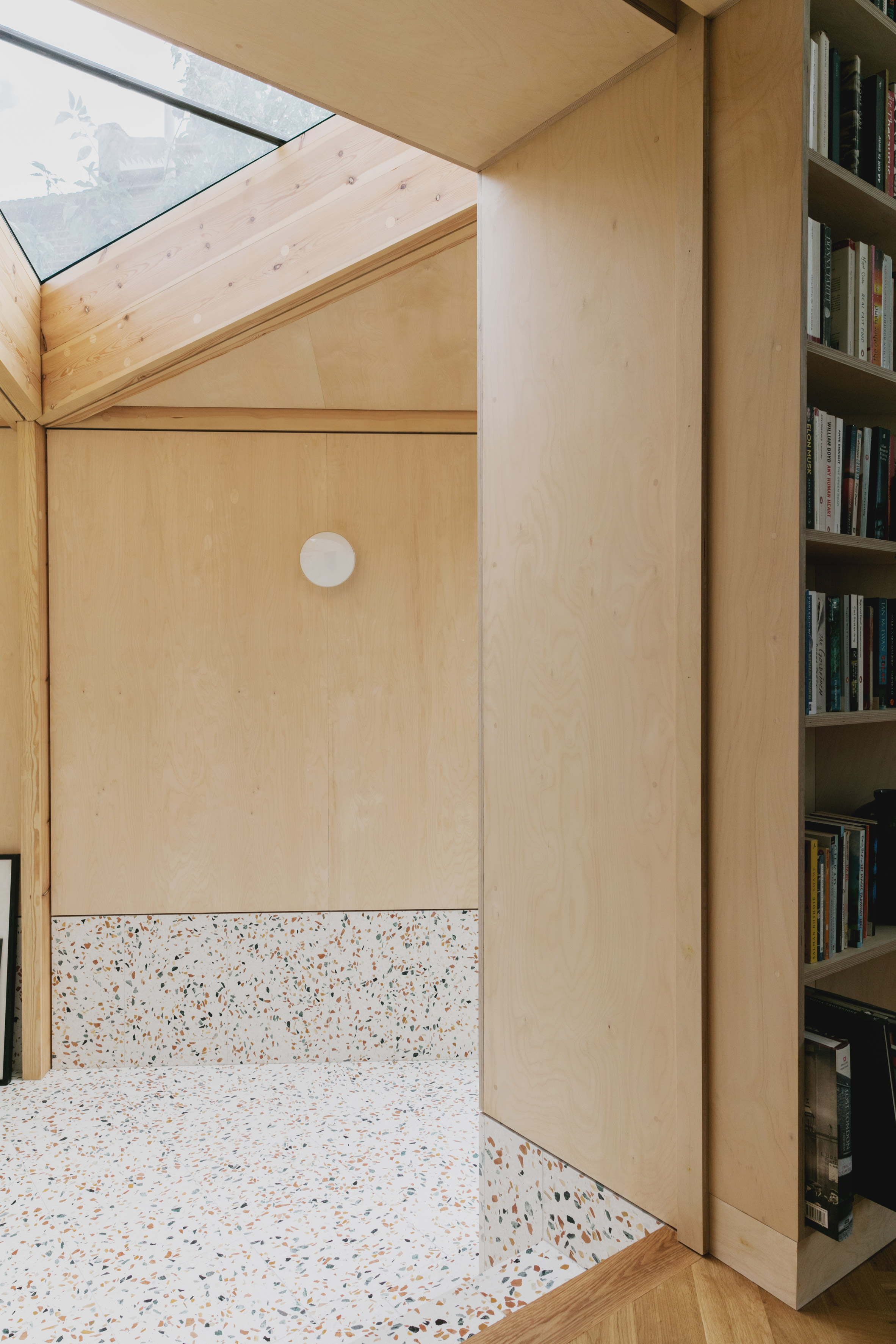 “[The clients] wanted to create something truly special – their brief was not only to create a much needed second bedroom and study, but to also enhance the eccentricities and add value to the architectural character of the building,” Sarah Castle, co-founder of the studio, explained to Dezeen. 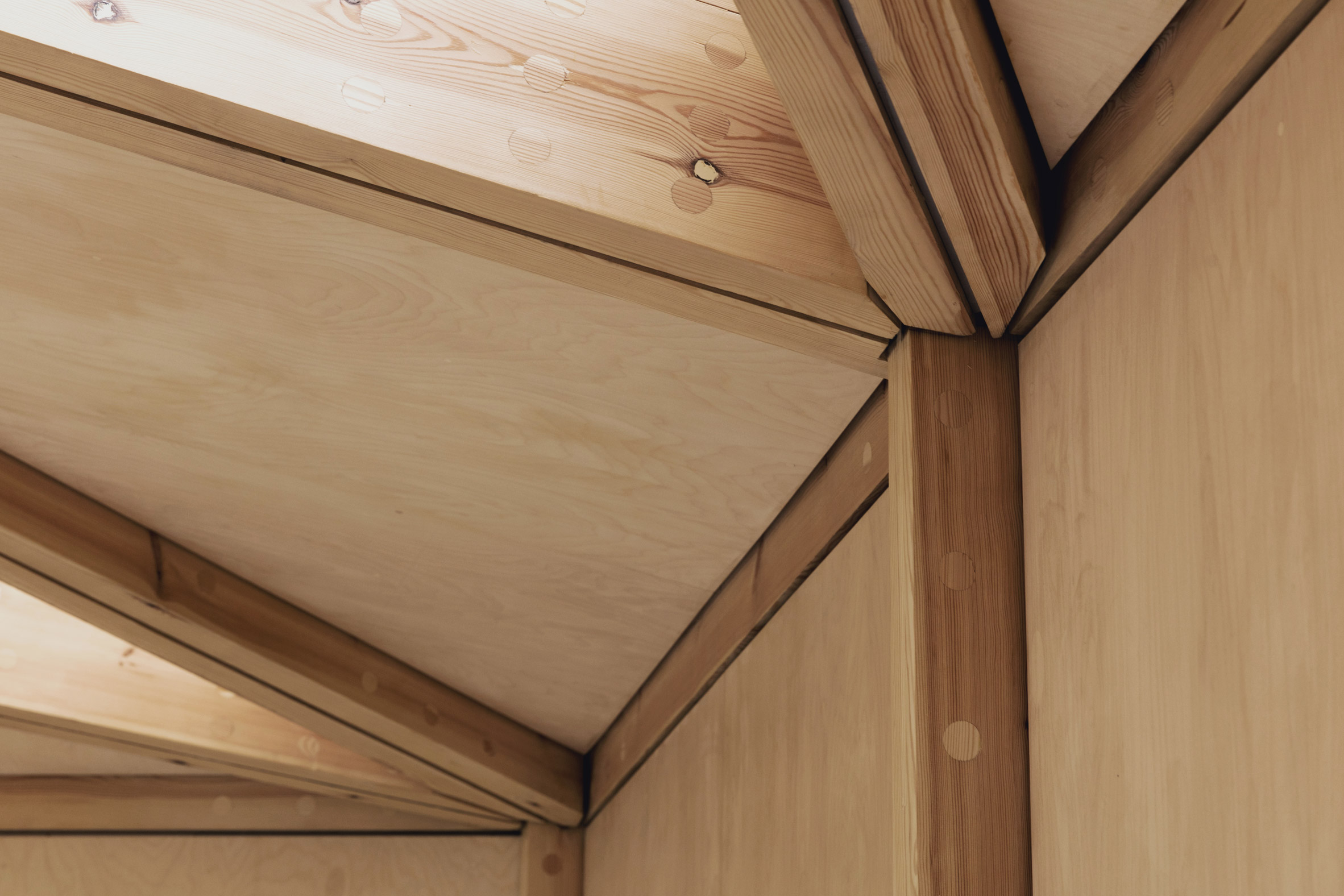 Taking over a dark and disused courtyard, the 73 square-metre extension features a birch timber roof that’s punctuated by triangle-shaped skylights.

As the flat is accessed from a narrow communal corridor, the studio designed the components so that they could be carried through the building to the construction site. Each part could measure no more than 2.4 metres. 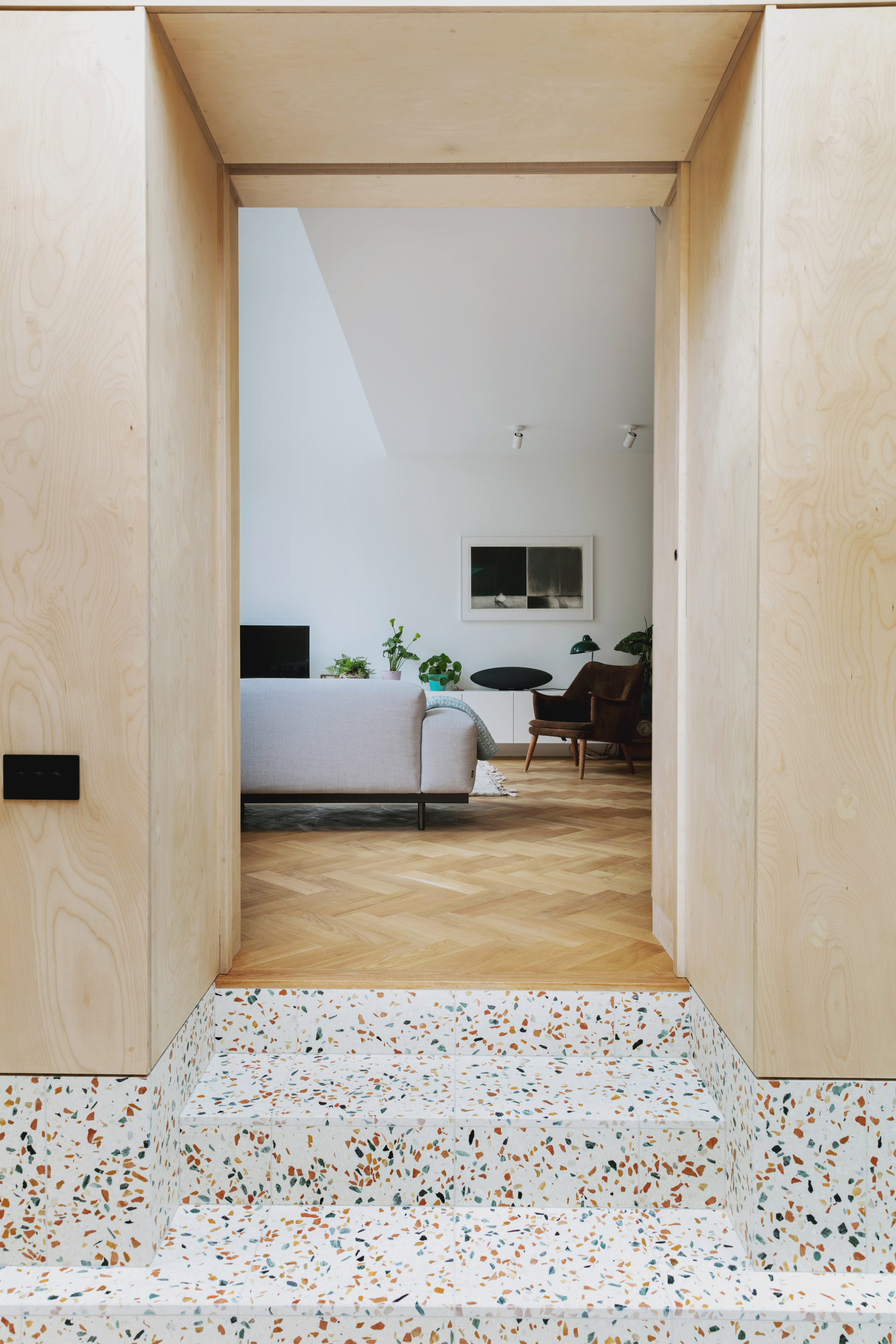 Birchwood has also been used to line the walls, while the floor has been covered with orange and green-flecked terrazzo – a visual nod to the original terrazzo entrance hall of the synagogue.

The extension also accommodates a small bathroom, which is accessed via a door that’s subtly embedded into the wall. 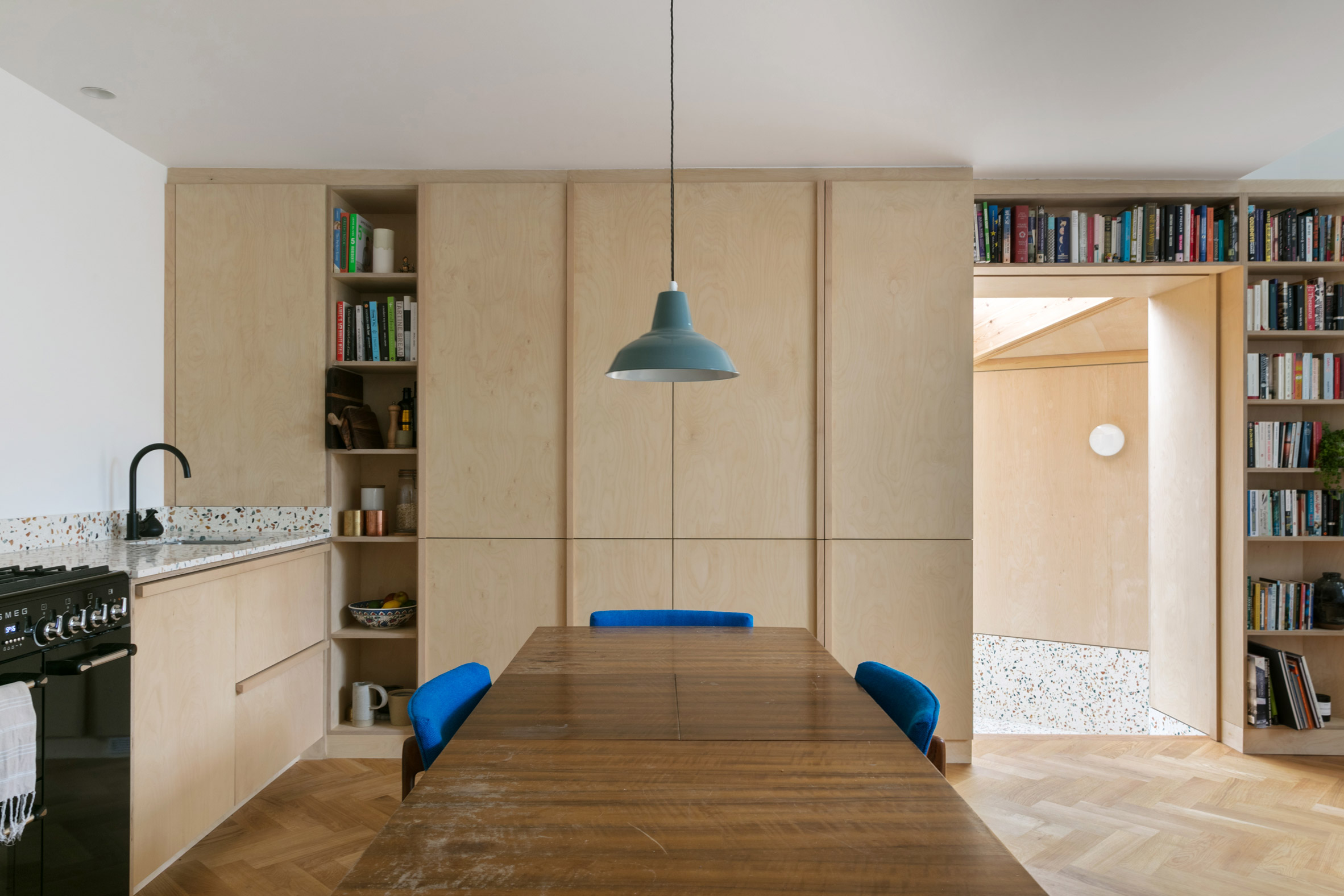 Timber extends through to the adjacent kitchen and living area, which the studio has updated with cupboards and floor-to-ceiling storage cupboards that openly display books and ornaments.

A new countertop has also been created from the colourful terrazzo that’s been used in the extension. 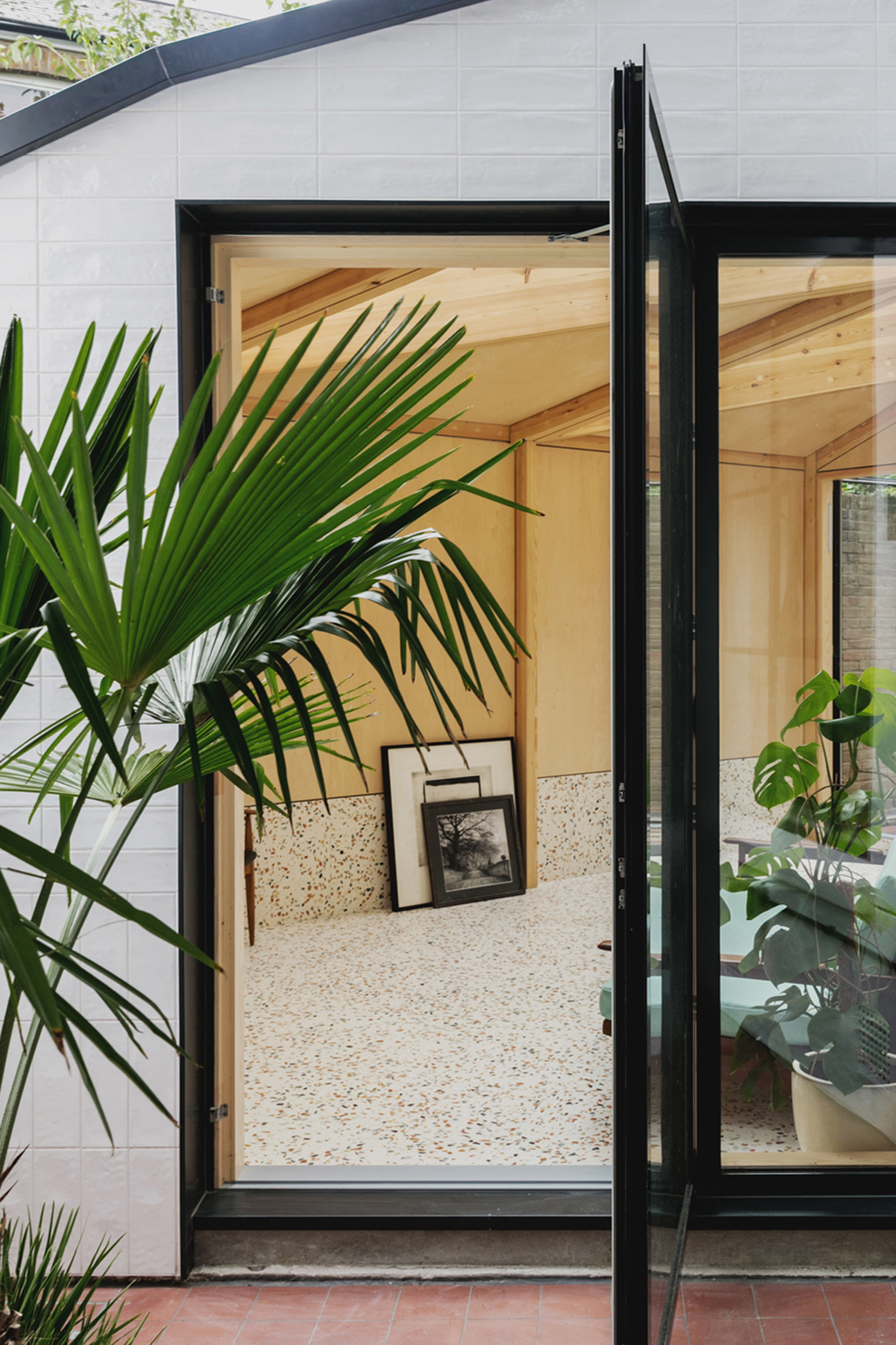 IF_DO was set up in 2014 by Sarah Castle, Al Scott and Thomas Bryans – previous projects by the studio include a sixth-form college in Surrey, which is wrapped around a planted courtyard, and a mirrored events pavilion on the grounds of John Soane’s Dulwich Picture Gallery.

Photography is by Mariell Lind Hansen.