Canadian architect Jean Verville has shrunk the floor area within this compact black cabin, in a bid to create a more spacious atmosphere. 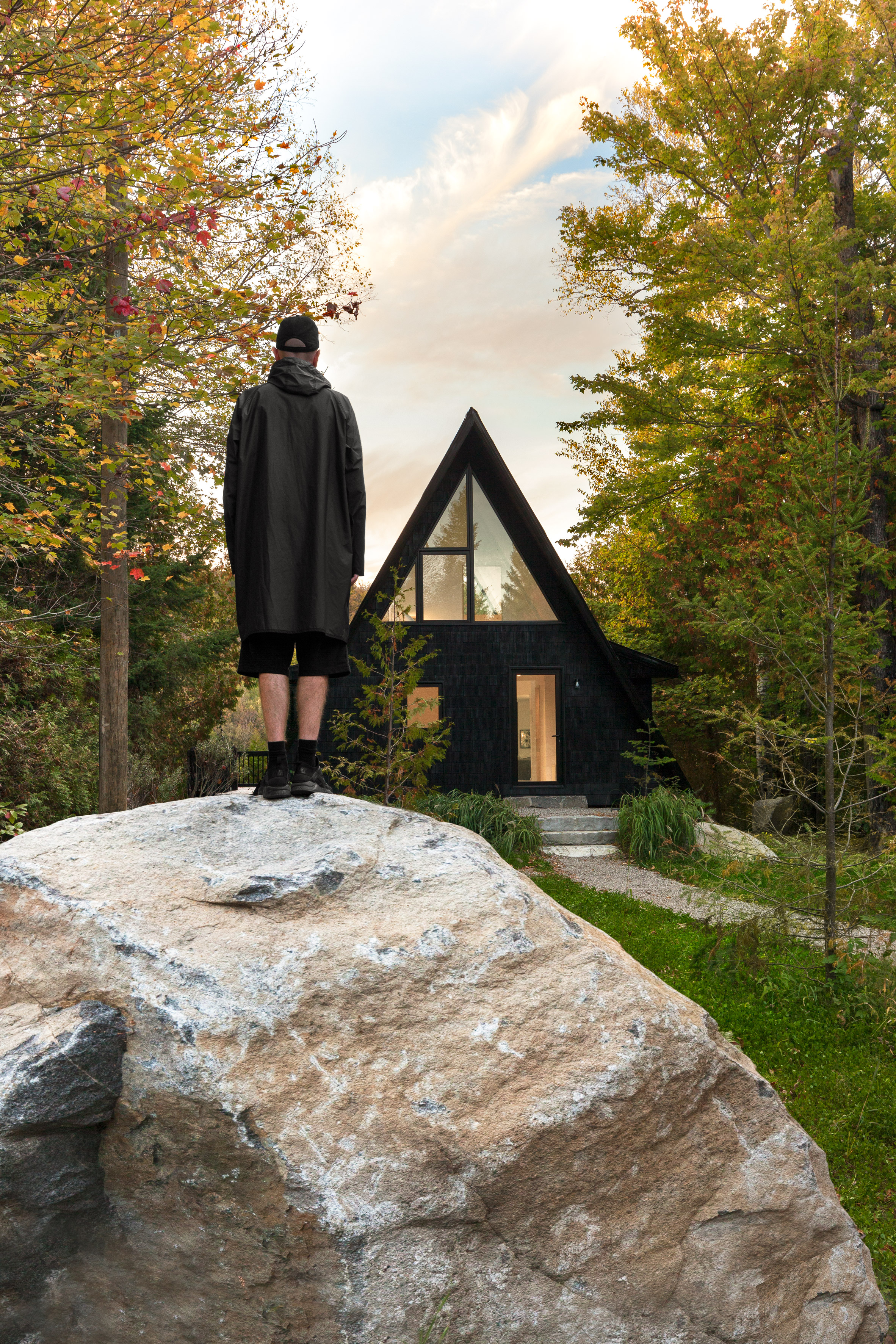 The project, titled Aframe Rehab by Subtraction, is located on a forested site in Saint-Adolphe-d’Howard, a small village in the Laurentian Mountains. Envisioned as a nature retreat for an urban family, the project entailed revamping a 1960s A-frame cottage that overlooks a lake. 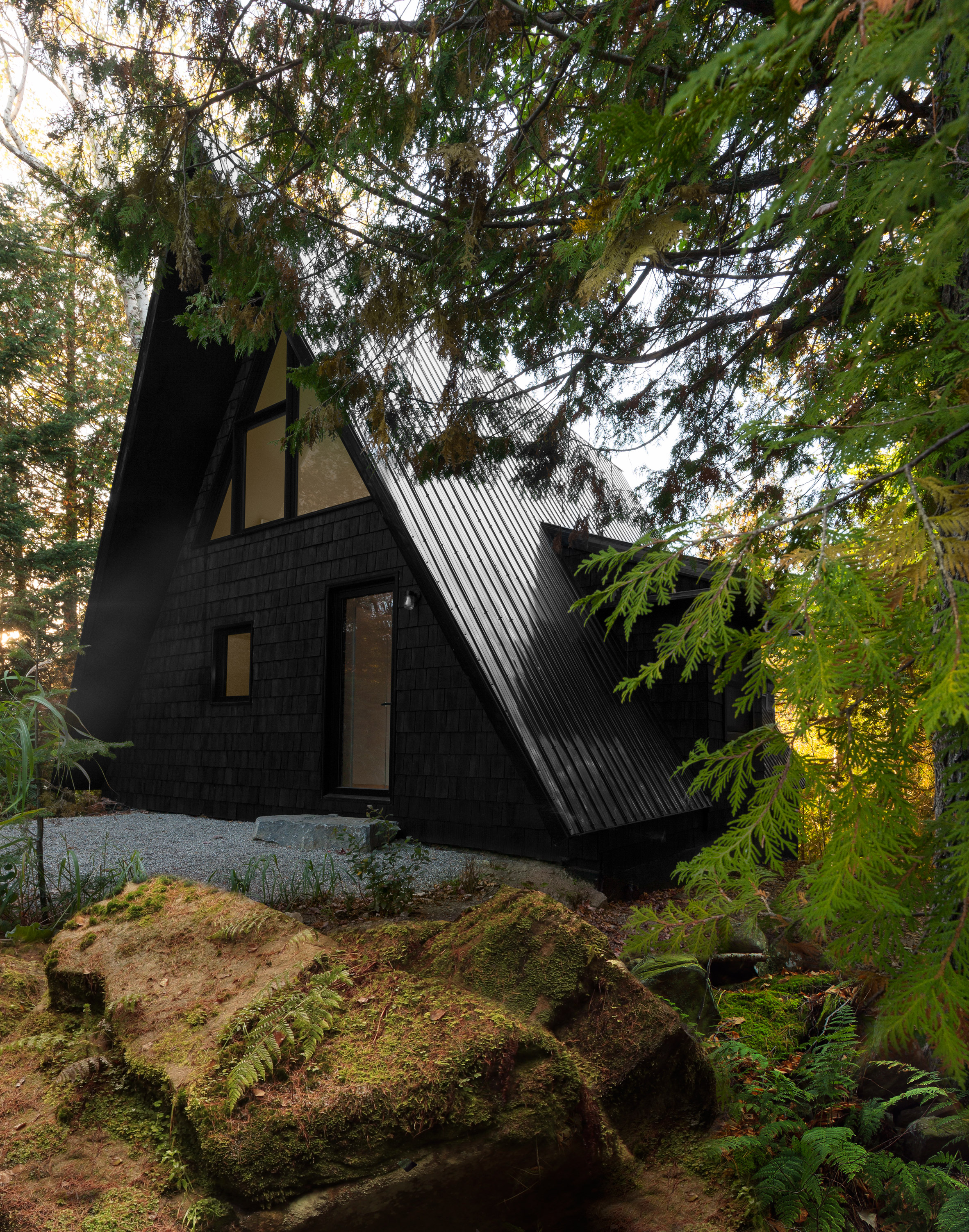 Rather than expanding the cabin’s footprint, Verville reduced the floor area, from 88 square metres to 64 square metres, through a strategy he calls “densification of spaces”. The process was guided by an investigation into how much actual floor space the occupants need for their daily activities. 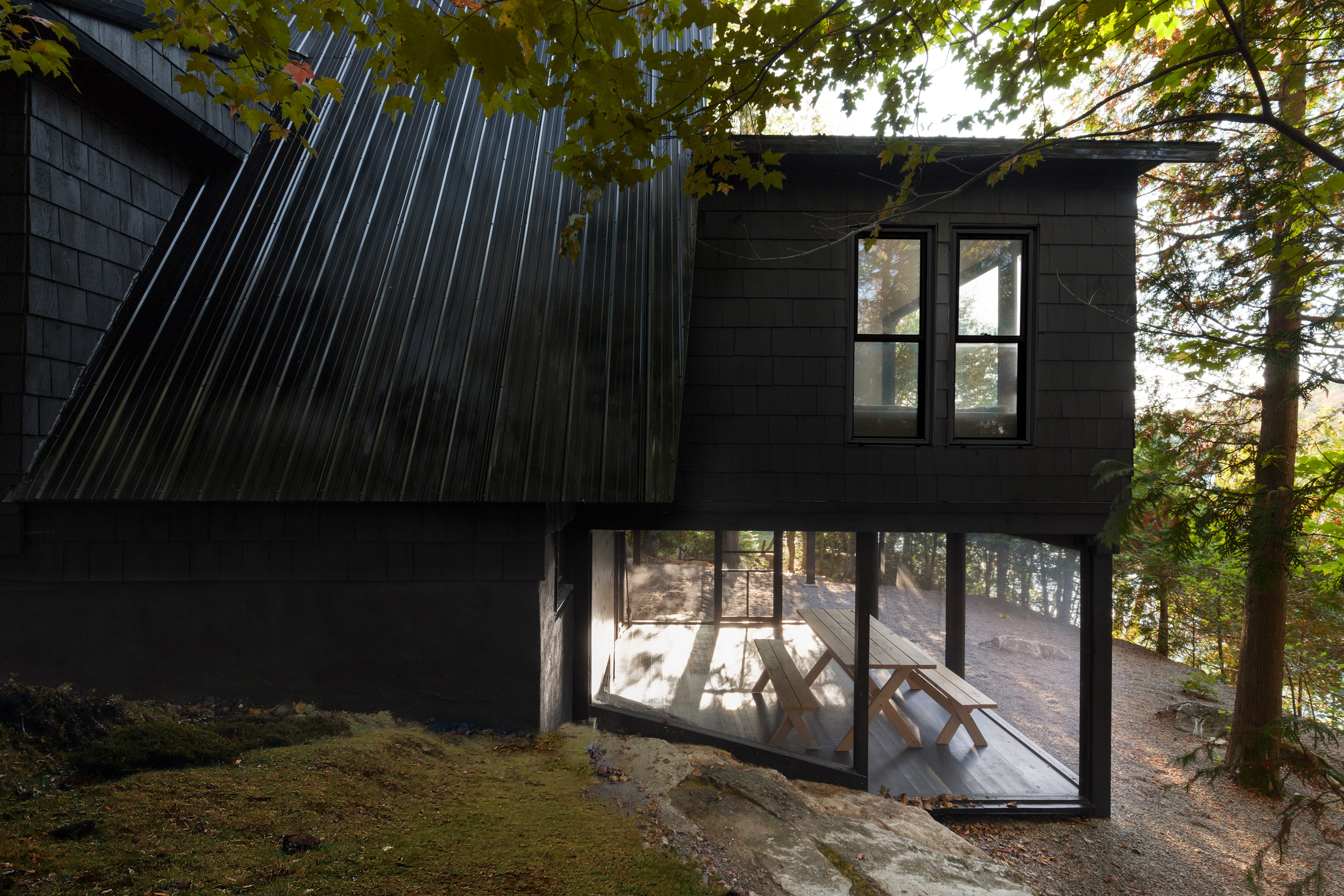 “The rehabilitation of this A-frame reflects the method of the architect who, approaching the essence of his clients’ everyday life, leads them to scrutinise their daily habits as well as their real family needs to surpass their own limitation,” said a statement from Verville’s eponymous studio in Montreal. 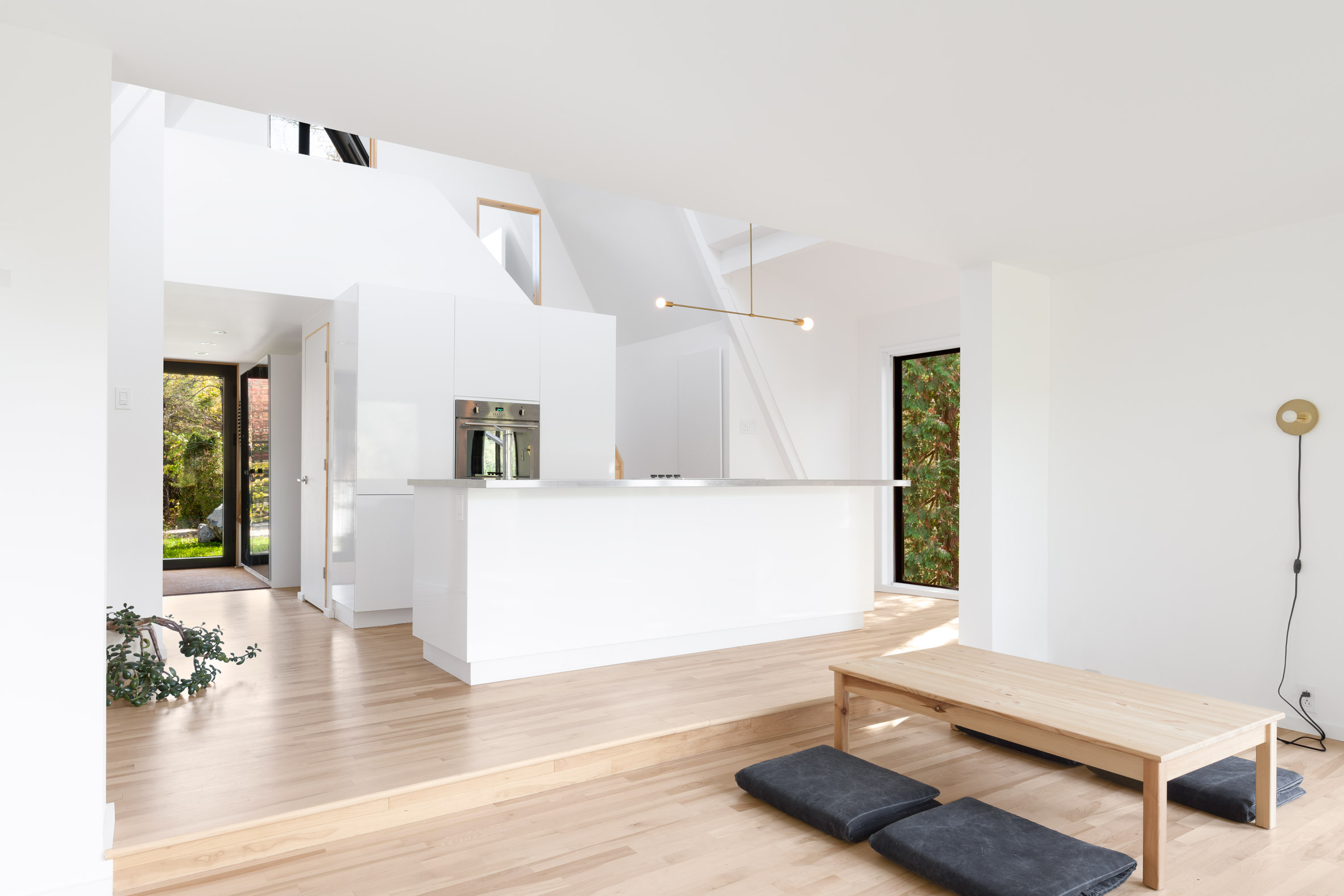 “Challenging the initial hypothesis of lack of space, the architect opted instead for subtracting floor areas in favour of spatial quality.”

Verville gutted the existing interior and completely reconstructed the space. His goal was to develop a layout that engenders a tranquil atmosphere far removed from the frenzy of urban life. 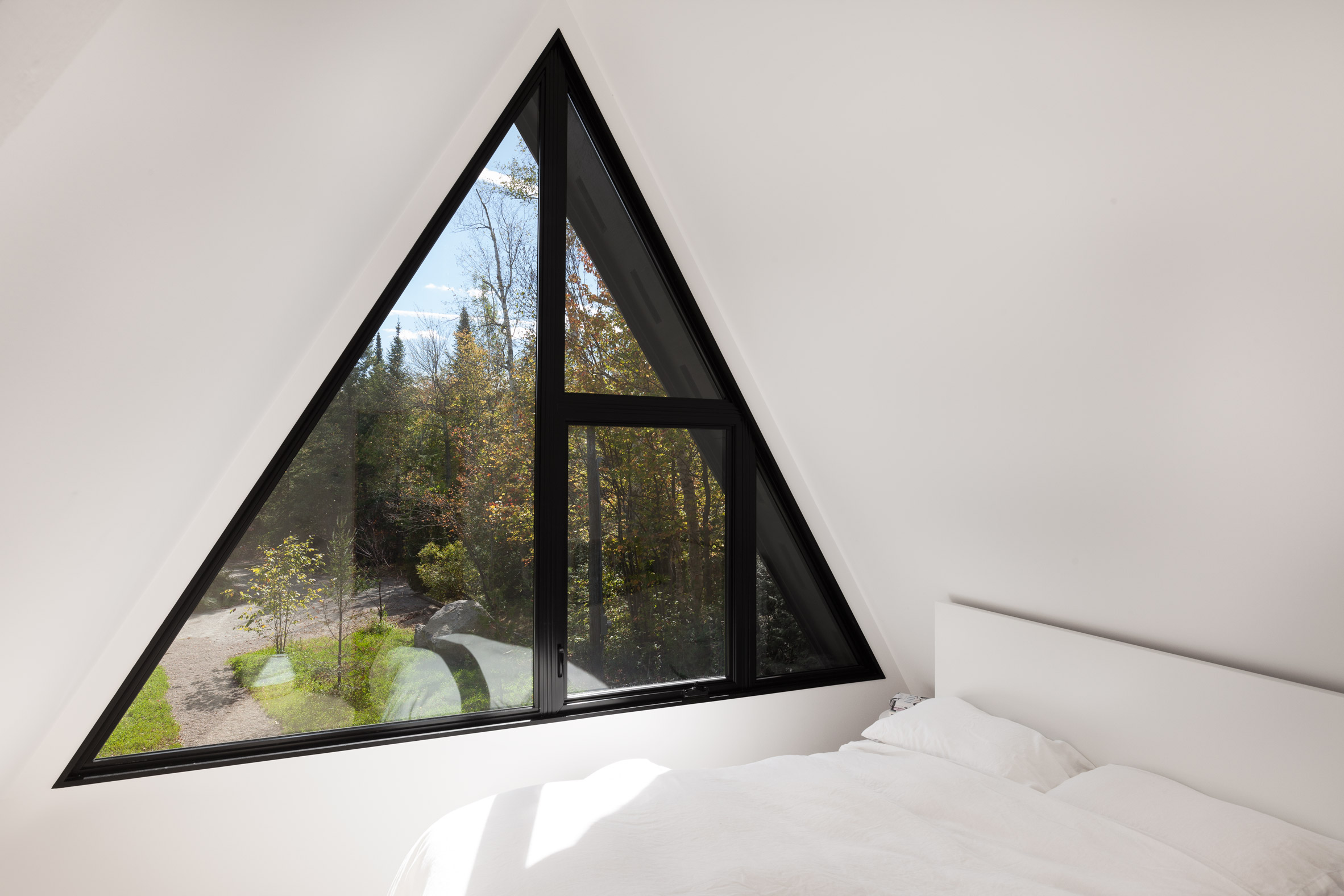 “From these choices originates a rhythmic plan, resulting in a compact spatial conditioning which gives the rehabilitation balance and coherence, offering much more in quality than it loses in quantity,” the studio said. 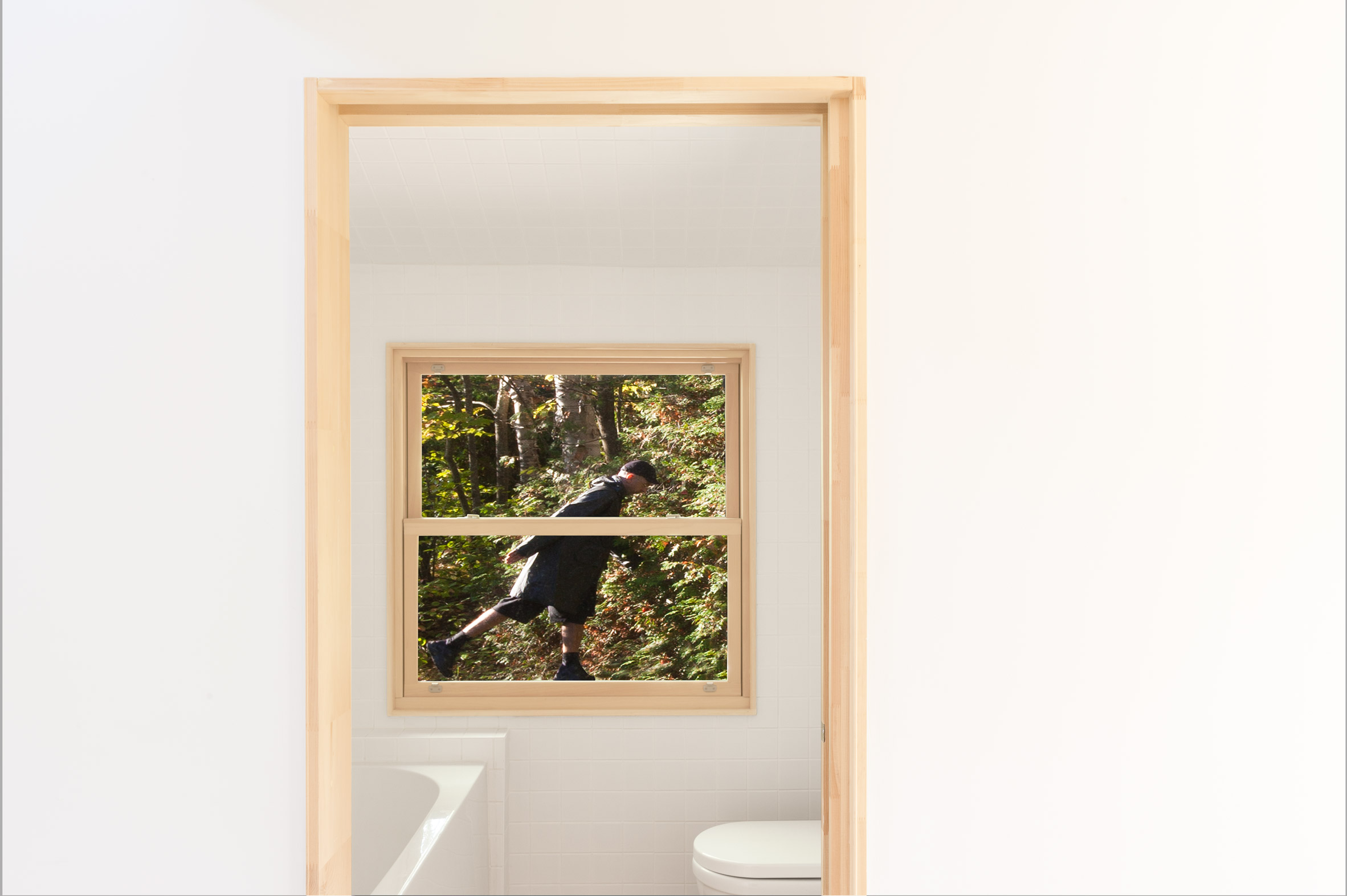 The ground level offers a compact kitchen in a double-height space, which steps down to a rectangular volume that contains the living room. The team used a restrained palette of materials and colours.

All-white walls are paired with Canadian maple flooring and wood-framed doorways. The living area has a grey sofa and black wood-burning stove, while the kitchen features a stainless steel countertop. 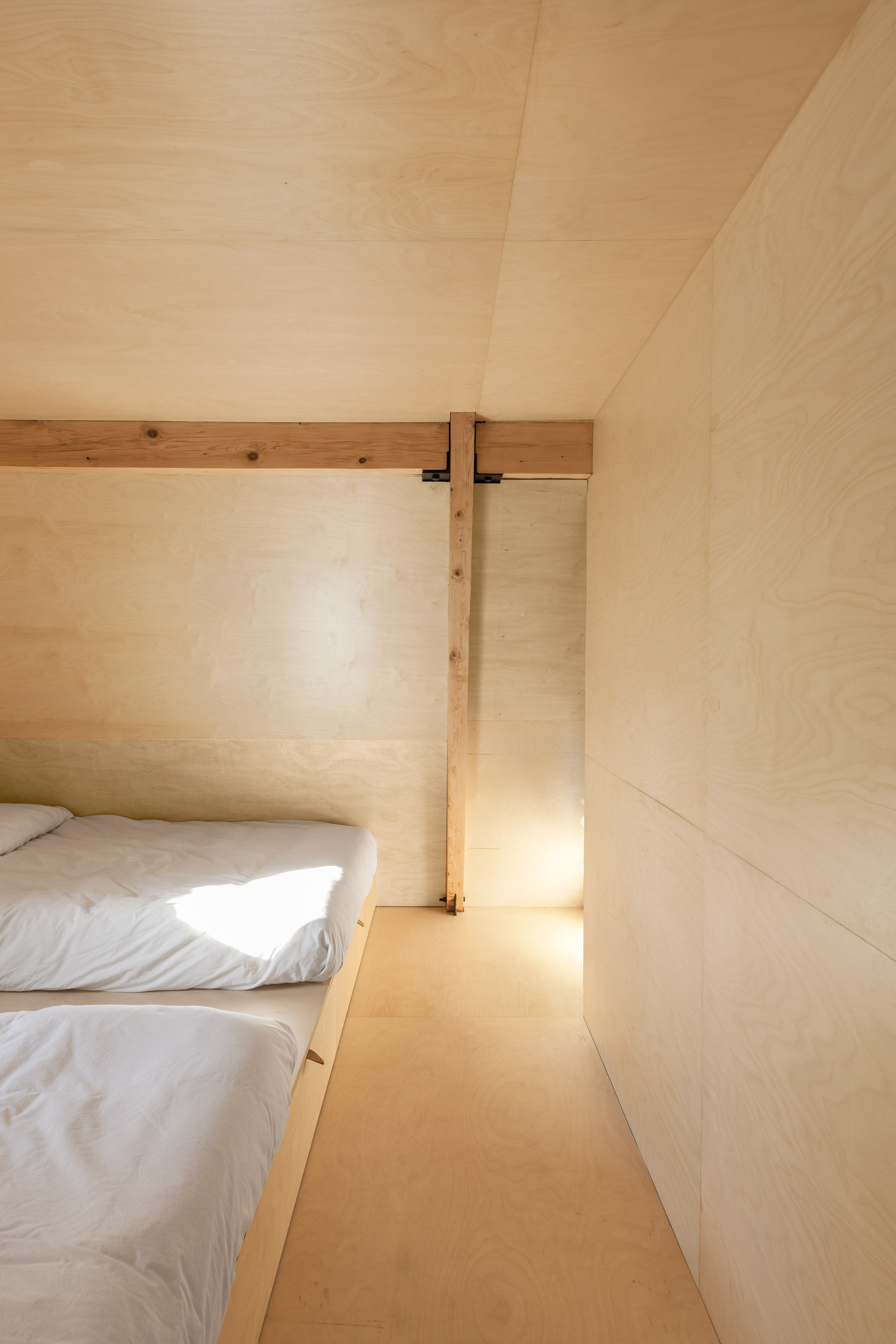 The ground level also contains a children’s bedroom. Beds sit atop a wooden platform that contains storage space, and a reading nook occupies a corner of the triangular alcove.

“This room, all dressed in wood, reveals a fascinating place entirely dedicated to childish games away from the living spaces of the ground floor,” the studio said. 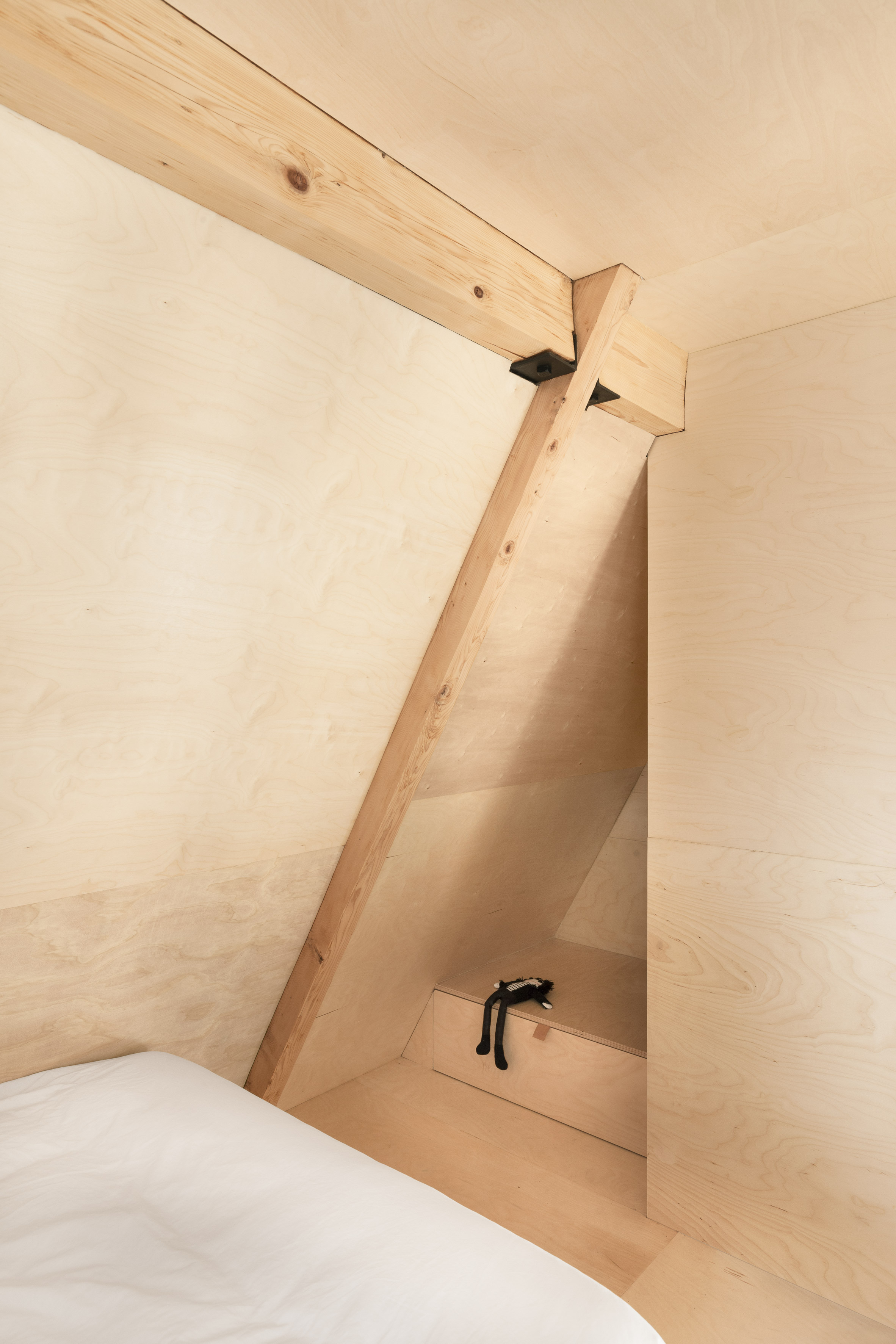 A maple staircase leads up to the master bedroom – an austere loft with white walls and a white bed. A rectangular cutout in the wall provides a view to the living room and the lake beyond. The opposing wall features a large, black-framed triangular window that overlooks the woods. 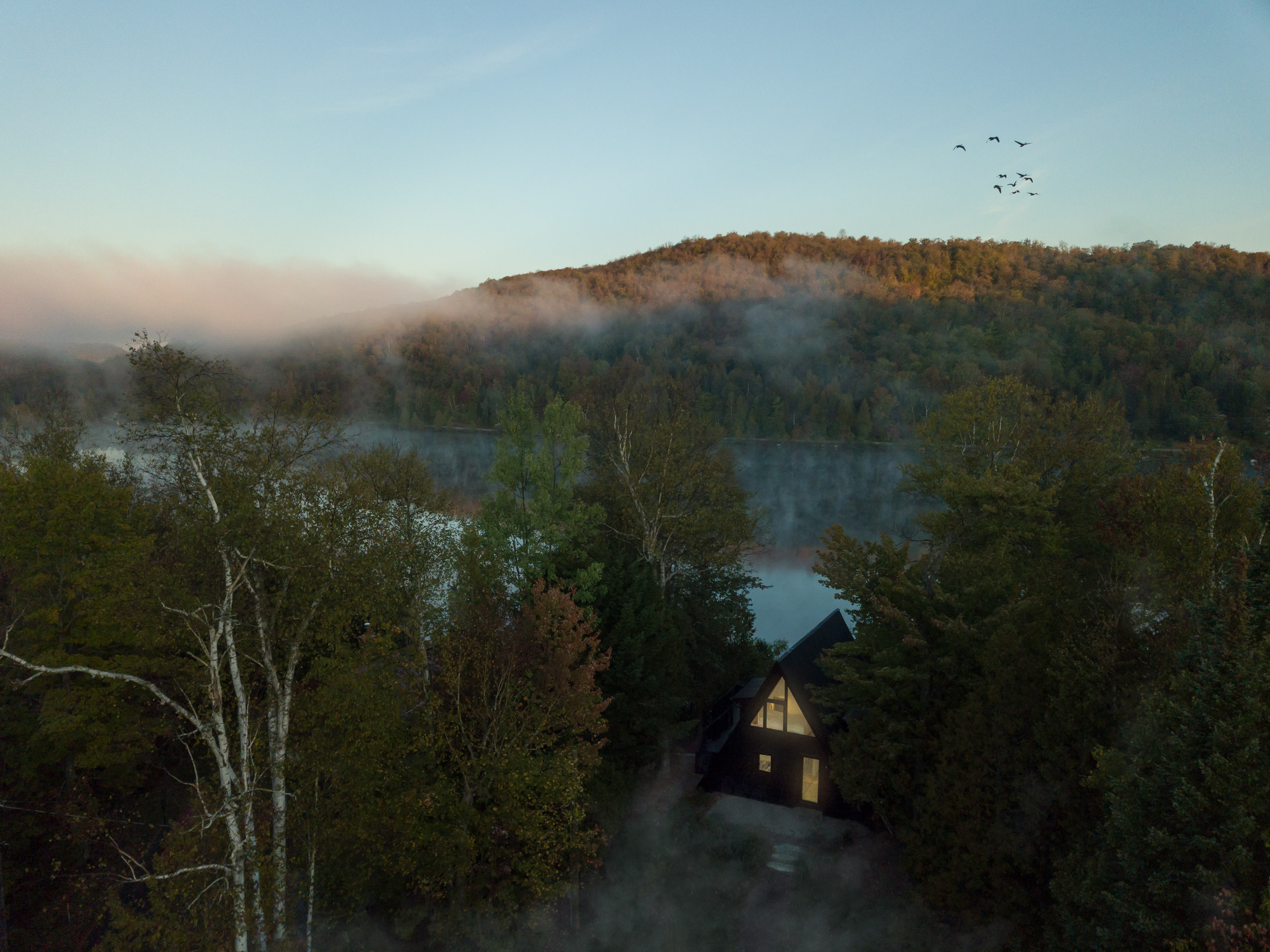 “Ingeniously playing with scales, Verville managed to increase the perception of visual depth by exploiting limits and openings,” the studio said.

Verville clad the cabin in black-stained cedar shingles and added various apertures. He also demolished a basement living room and replaced it with a porch. 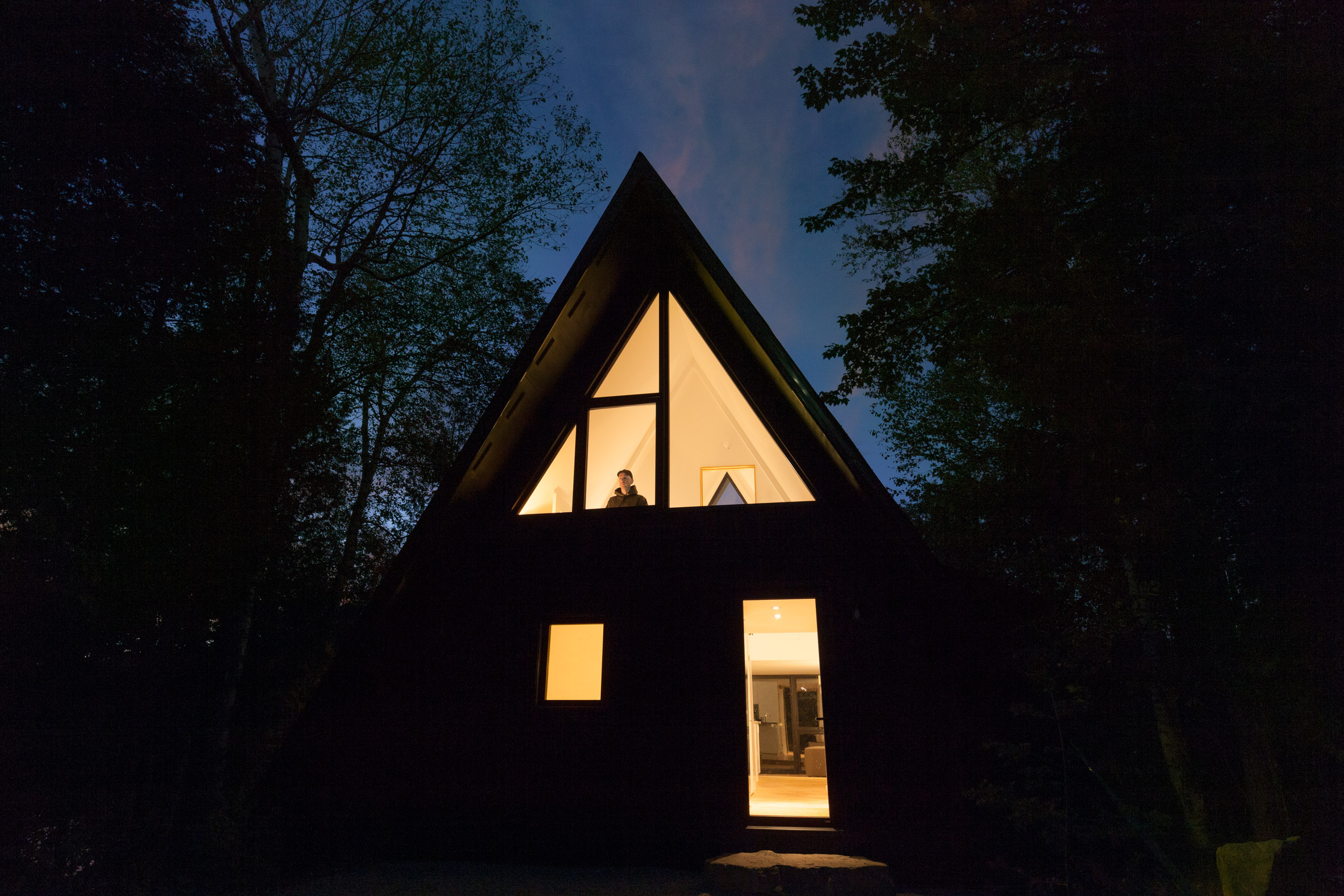 “The subtractions applied to the four elevations pierce new openings – pointing sometimes to the lake, sometimes the sky – to better converse with the landscape,” the studio said.

Jean Verville has completed a number of imaginative projects that represent a “hybridisation between arts and architecture” – and has also posed for the photography. He can also be spotted in his a black fairytale-like cottage in Quebec, a monochrome urban apartment that tricks the eye, and the conversion of a backyard shed into a minimalist studio. 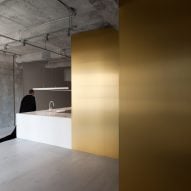