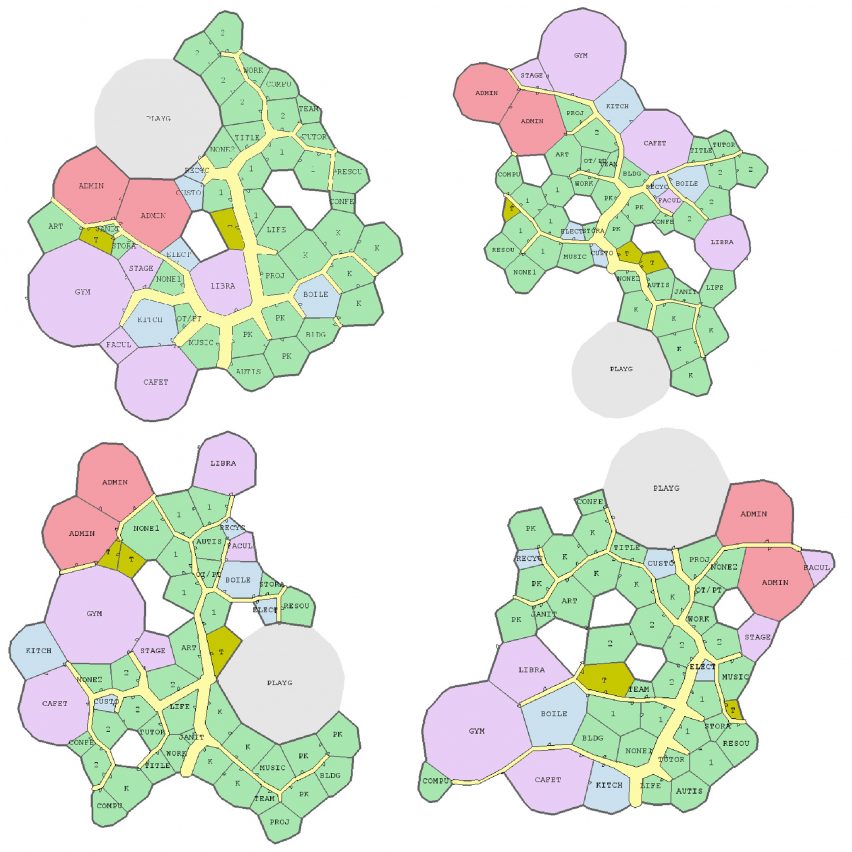 Simon – who until recently was a lab member at Rockefeller University in New York, studying biophysics – developed the methodology for an experimental research project he calls Evolving Floor Plans.

His algorithm transforms a standard floor plan, to minimise the length of corridors and reduce walking time. This results in free-form layouts, with not a square or rectangular space in sight.

Simon describes the plans as “biological in appearance, intriguing in character and wildly irrational in practice”.

He claims the tool could be used to “breed” buildings, with the use of digital technologies like 3D printing.

“I came across some of the research in 3D printed buildings back in 2016,” he told Dezeen. “While nascent, it got me thinking about what new types of design tools would be required to take full advantage of the medium.”

“But what if generative tools could allow us to breed optimised forms the way we breed dogs?”

The algorithm draws on Simon’s experience in biology and computer science.

It imagines the rooms of the building as node genes, each imbued with information such as area. These are joined by connection nodes, which show the rooms need to be positioned adjacent to one another.

A mapping process is then used to create an optimal layout. Once the centre coordinates of each room are in place, a polygonal mesh is created to form walls, before corridors are added into the spaces between.

Simon has also added an option that allows you to specify which rooms need the biggest windows.

At present, the method doesn’t take any external constraints into consideration, such as building costs or the shape of a site. Simon intended it as a simple design exercise.

However he has since received interest from building planners who are interested in making use of the technology. He is also developing other models for exploring the potential of generative design in buildings.

“I imagined more the design than the construction, although it also got a lot of interest from city and residential planners who saw the potential for incorporating optimisation into their work,” he explained.

“It’s obviously more of an experiment or provocation than anything practical on its own,” he added. “I have been looking into more practical implementations of generative design tools and there are a lot of other talented people looking into that too.”

Simon has published his methodology in full on his website.

He is among a number of designers and academics exploring the opportunities presented by generative design. According to software experts, generative design tools – which produce optimum forms for products and buildings without human intervention – are set to transform the role of the designer.