Located in Palm Springs‘ Southridge community, Hope Residence was completed in 1980 as the second home of the comedian – a popular film and television star at the time – and his wife Dolores. 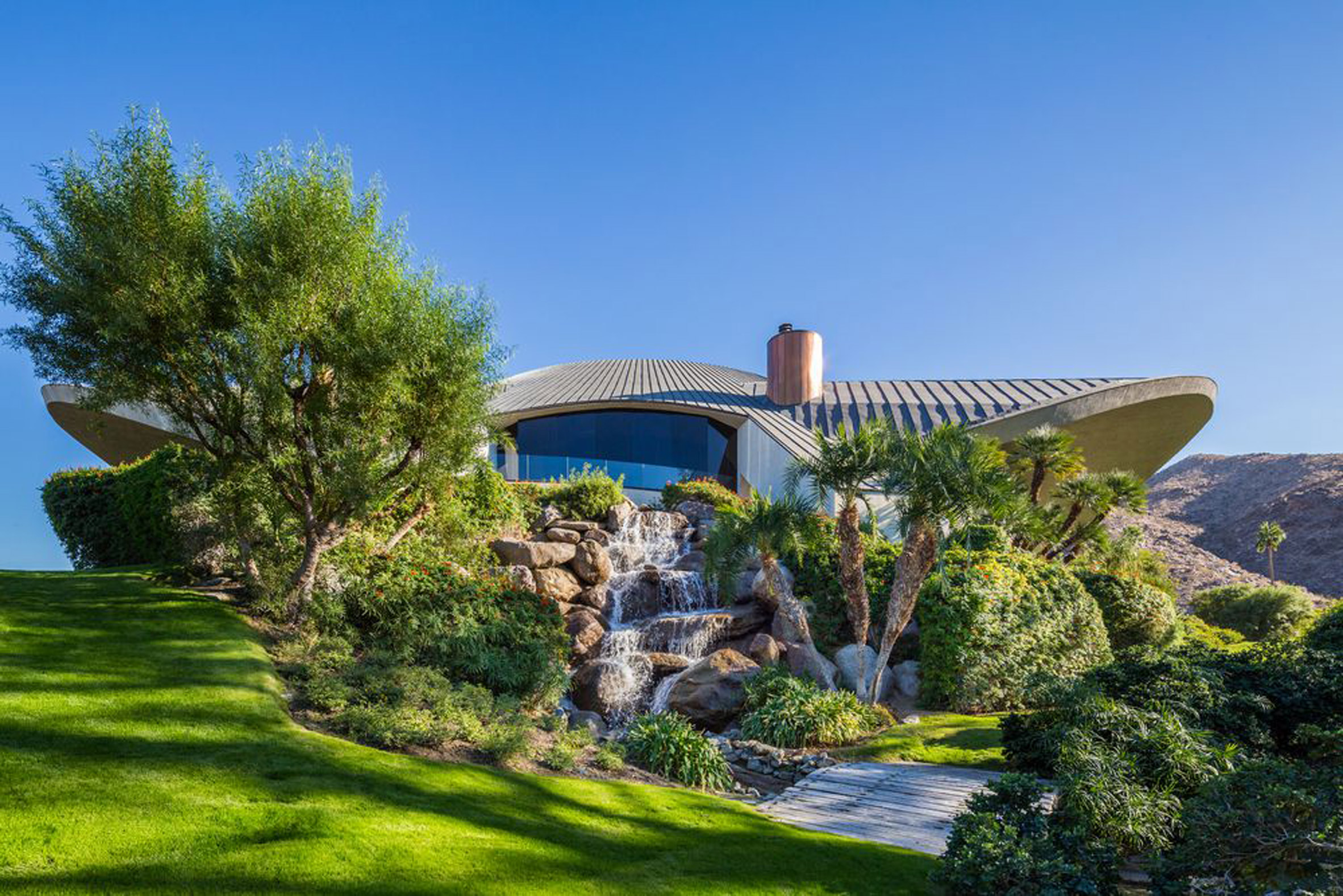 Covered by a large domed roof, the concrete residence is often likened to a mushroom. But Lautner is said to have modelled its unusual shape on a volcano, puncturing a huge hole in the roof to offer sky views and natural light to the patio below.

As the roof curves down, it forms three arches that open vistas to the garden and panoramic vistas of the surrounding Coachella Valley. 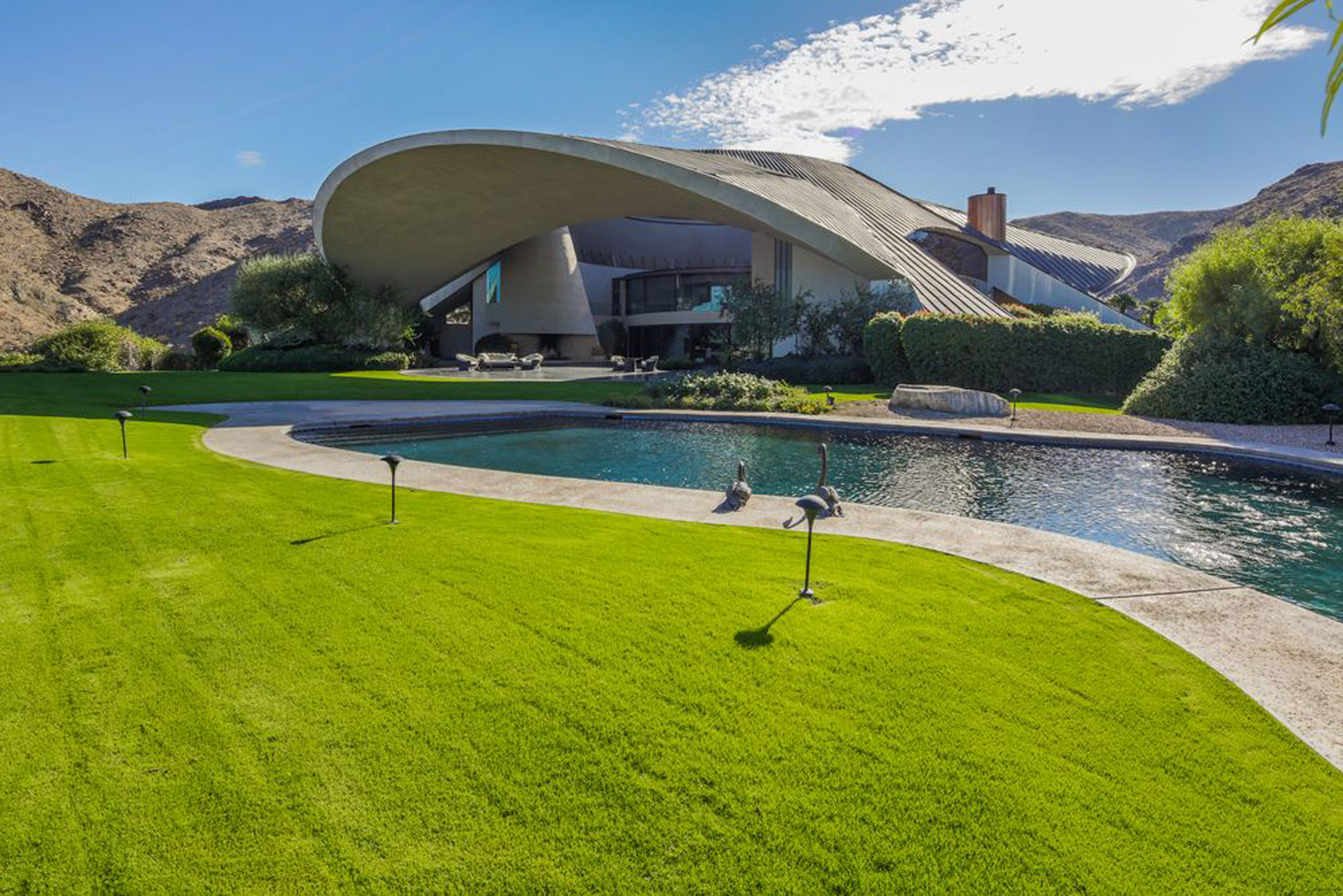 By referencing natural forms, Lautner was following in the footsteps of his mentor Frank Lloyd Wright, who promoted the harmony between design and nature with his “organic architecture” philosophy.

Lautner had served as an apprentice for Wright during the mid 1930s and by the time he came to design the house for Bob and Dolores in the 1970s, he had worked to distance himself from his famous teacher. However, many features are clearly comparable, like the curved forms and large expanses of glazing. 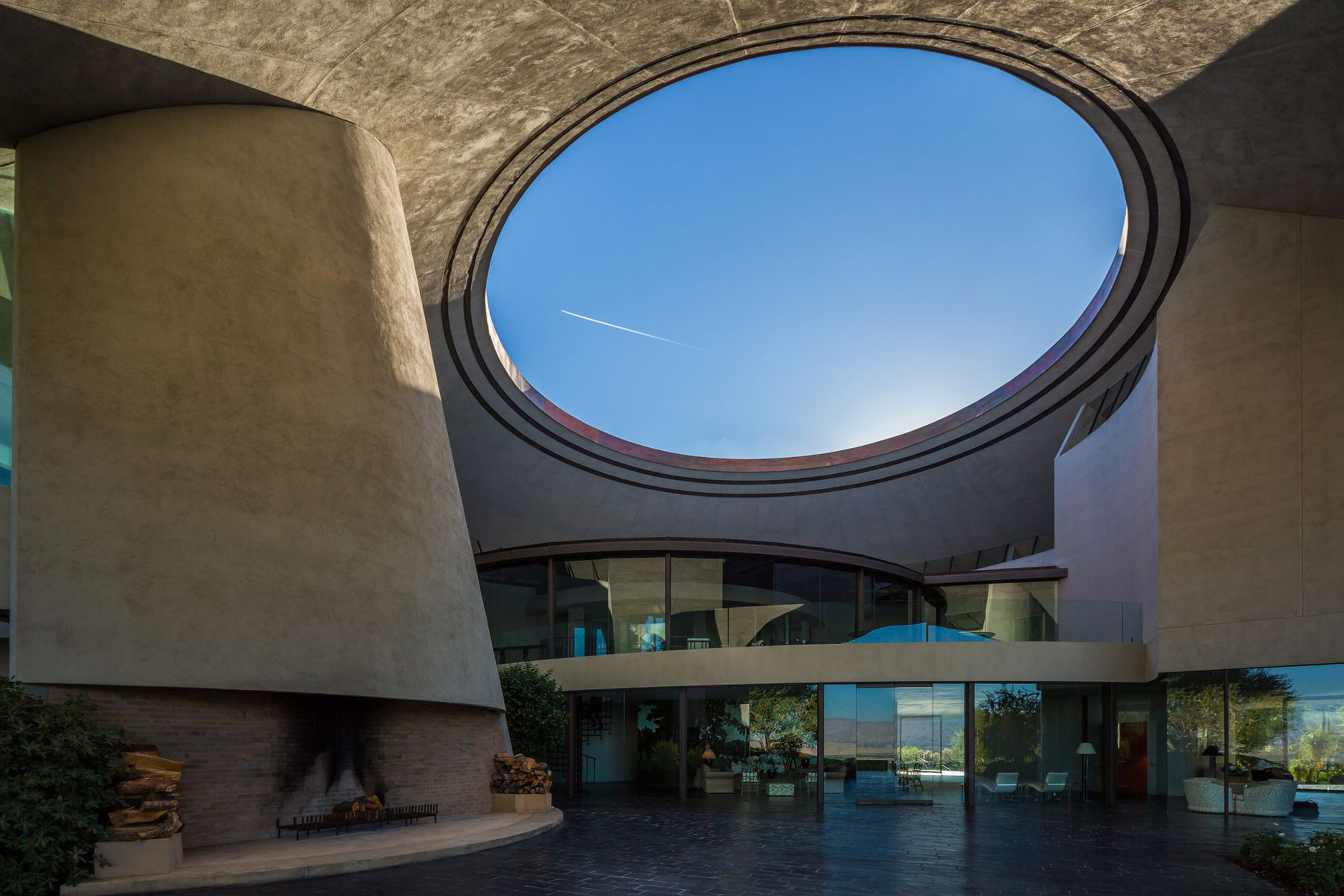 Other Wright-esque details include the steps around the house that lead to the outdoor areas – which includes a rockery, a pool and a pond – and a large boulder that juts into the lounge, mimicking a similar feature in Wright’s Fallingwater.

Bob and Dolores Hope were among a host of wealthy clients and celebrities that commissioned holiday villas in Palm Springs, where the modernist architecture movement boomed during the mid-20th century. The duo are reported to have hosted parties with up to 300 dinner guests in the central outdoor terrace. 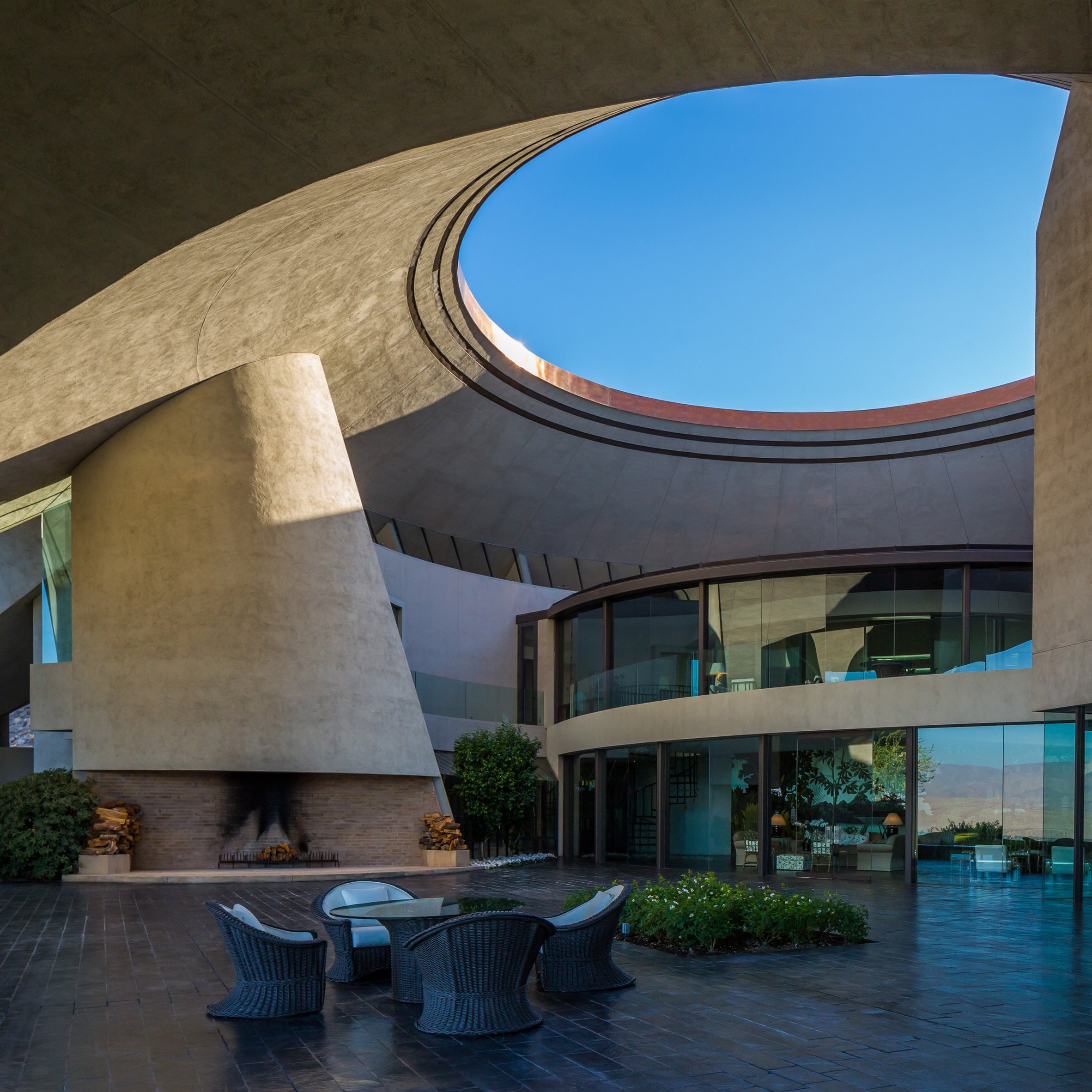 While partially shaded from the desert sun in the day, this space features a fire inside a cone-shaped chimney to add warmth during night-time events. 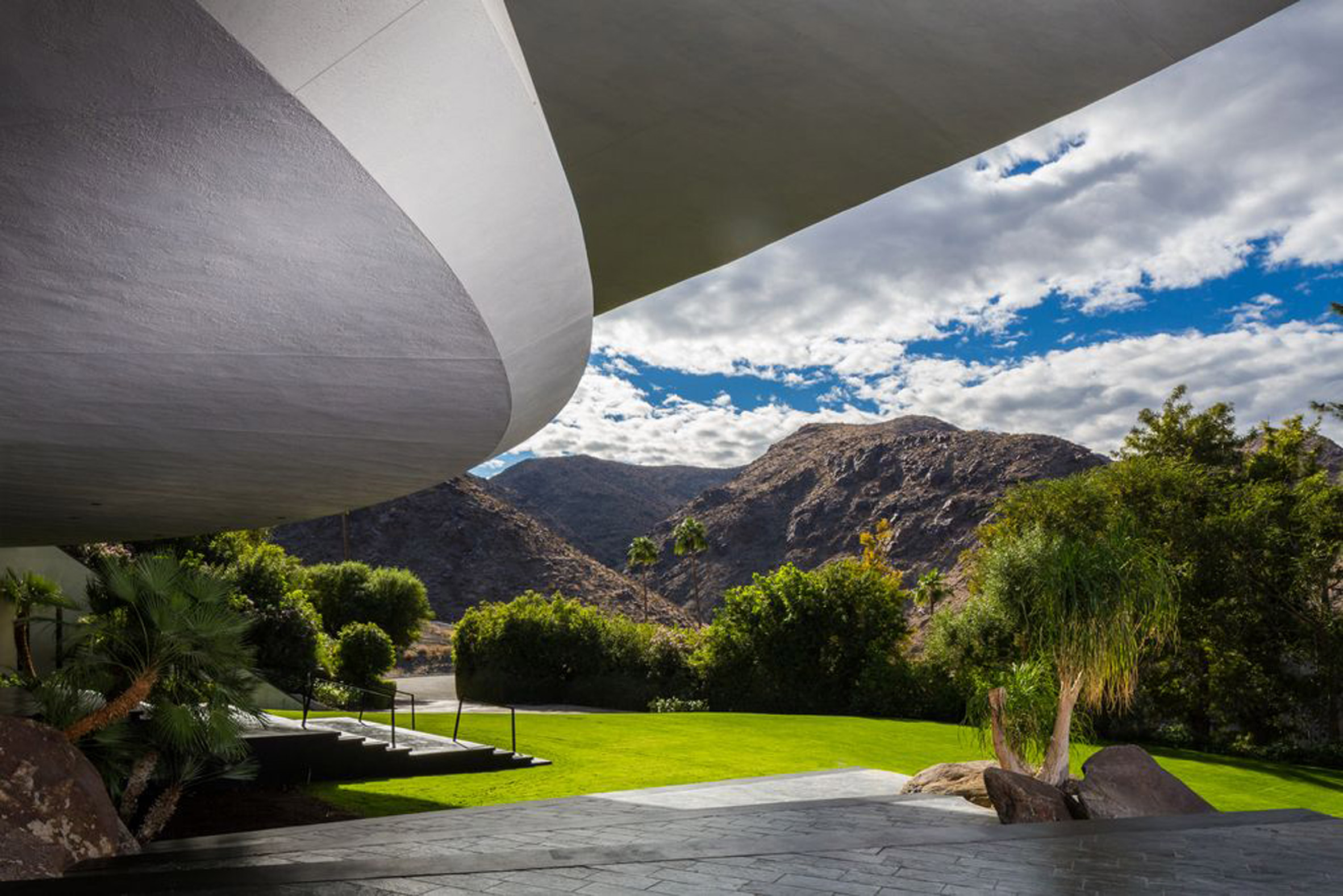 The house caught on fire during its construction in the 1970s and burned to the ground. Dolores Hope reportedly made many alterations to the property’s interior during the second round of building work, causing the architect to detach himself from the project. 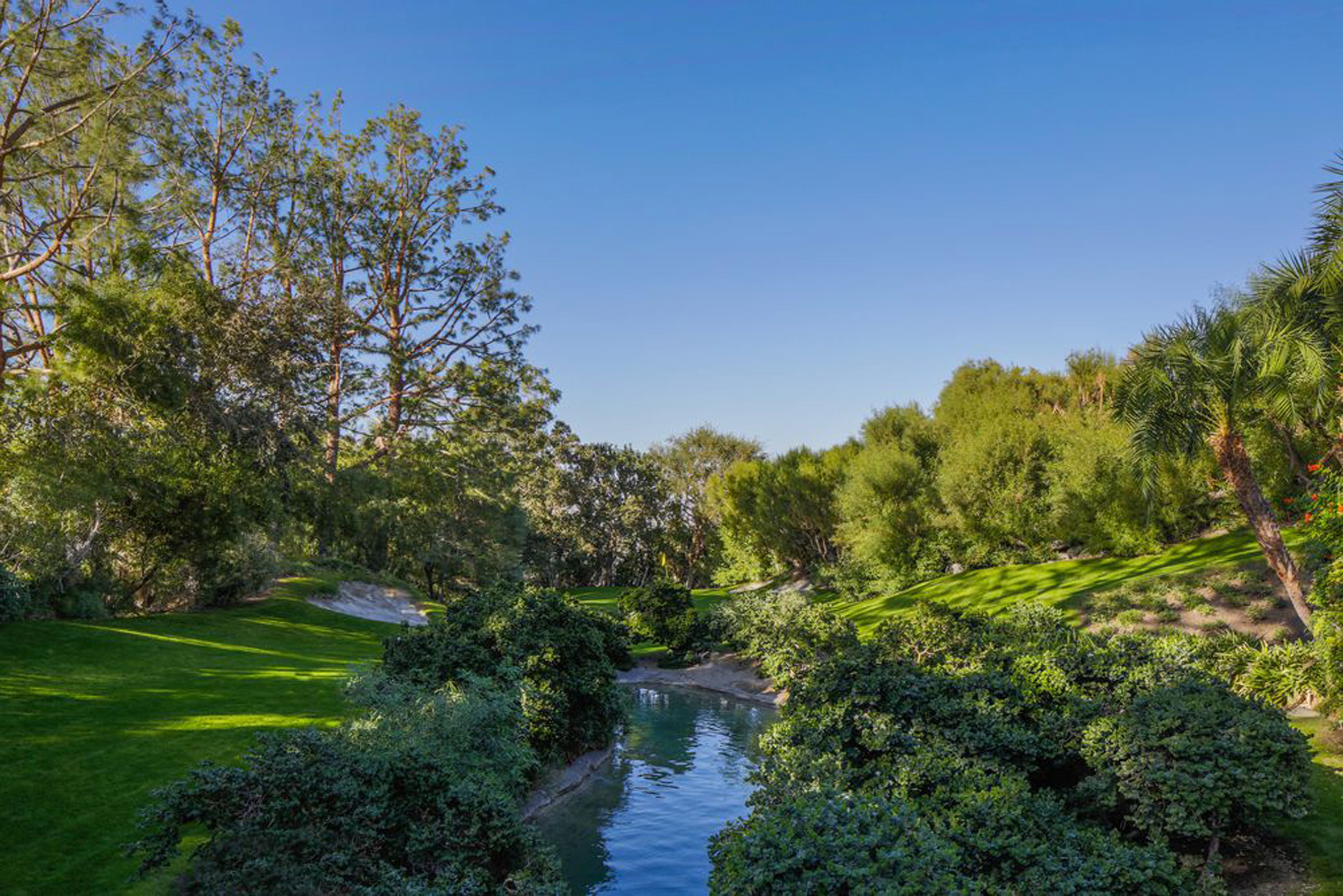 Palm Springs hosts the Modernism Week annually in recognition of its status as a modernist mecca, with this year’s event running from 15 to 25 February 2018.

Dezeen is publishing the most important examples of its mid-century buildings every day to coincide with the event, highlighting works like the Tramway Gas Station – now the Palm Springs Visitors Center – by Albert Frey and Robson Chambers – and Richard Neutra’s Kaufmann House.