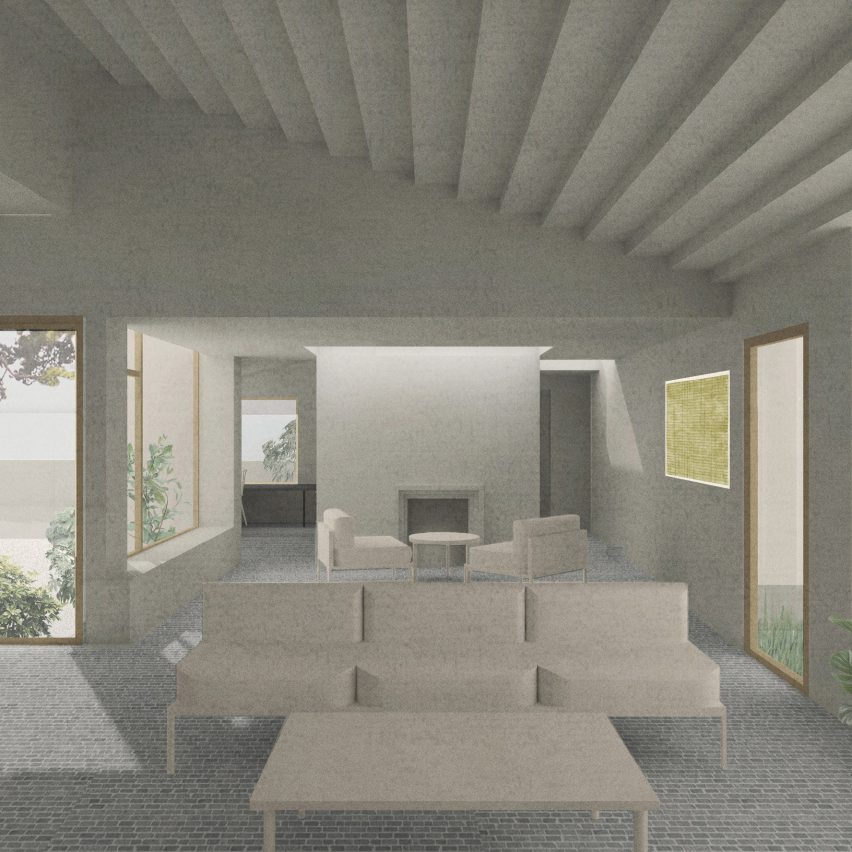 London architecture studio Jonathan Tuckey Design is set to add a hempcrete extension to a house in a conservation area in Cambridge, UK.

Named Hempcrete House, the structure will be built as an extensive contemporary extension to a Victorian villa.

Situated in the De Freville Conservation Area, Jonathan Tuckey Design chose to build the extension with hempcrete walls for their aesthetic and environmental credentials.

“The new hempcrete walls compliment the tone and texture of the historic stone whilst pursuing a sustainable material and method of construction,” said Jonathan Tuckey Design founder Jonathan Tuckey.

“The hempcrete itself is beautiful with a raw, natural, and granular quality,” he told Dezeen.

“Whilst tonally and texturally similar to the historic fabric of the Victorian stone, the poured and singular mass recognises itself as a contemporary structure and new addition to the existing Victorian villa.”

The extension will be made of three volumes, each with mono-pitched roofs, that contain a living space, bedroom and study.

Within these spaces, the ceilings will be stepped “to reference the historic detailing on the existing house”. Below ground, a basement floor containing a pool will be built.

On the exterior of the building, the hempcrete walls will be left unfinished while internally they will be finished with clay plaster.

“The new Hempcrete walls are expressed externally as a way of sensitively extending the existing property,” explained Tuckey.

“Being formed from completely natural materials, the softness and honesty of the hemp and lime finish speaks to the existing stone detailing seen around the house, but also sits comfortably within the extensive garden and landscaping.”

Alongside its appearance, the studio chose hempcrete as it is a carbon-negative building material.

More carbon is captured from the growth of the hemp plant, which is combined with lime to make hempcrete, than is emitted in the production of the material.

According to the studio, a further benefit is the fact that the material can be used as both structure and insulation, reducing the complexity of construction.

“The other advantage of hempcrete is the simplicity of its construction,” explained Tuckey.

“It forms both the wall and the insulation at once, as opposed to conventional insulation materials which are typically installed in a cavity between blocks,” he continued.

“Furthermore, when mixed with lime, the material hardens to also form the external finish of the building, further reducing the need for additional materials.”