Kaan Architecten has extended a 19th century school to create the Utopia building in Aalst, Belgium, which contains a music school and library.

Utopia, the Library and Academy for Performing Arts, is named after the book by Thomas Moore, which was first printed in Aalst.

Kaan Architecten won a competition to overhaul an existing block in the city, including a 19th century brick building that was originally a Pupilenschool – a school for the children of soldiers to be taught until they were old enough to join the army themselves.

The architects demolished two sides of the existing block on the triangular site, retaining the old school building and integrating it into a new rectangular plan to create three public spaces around the building. 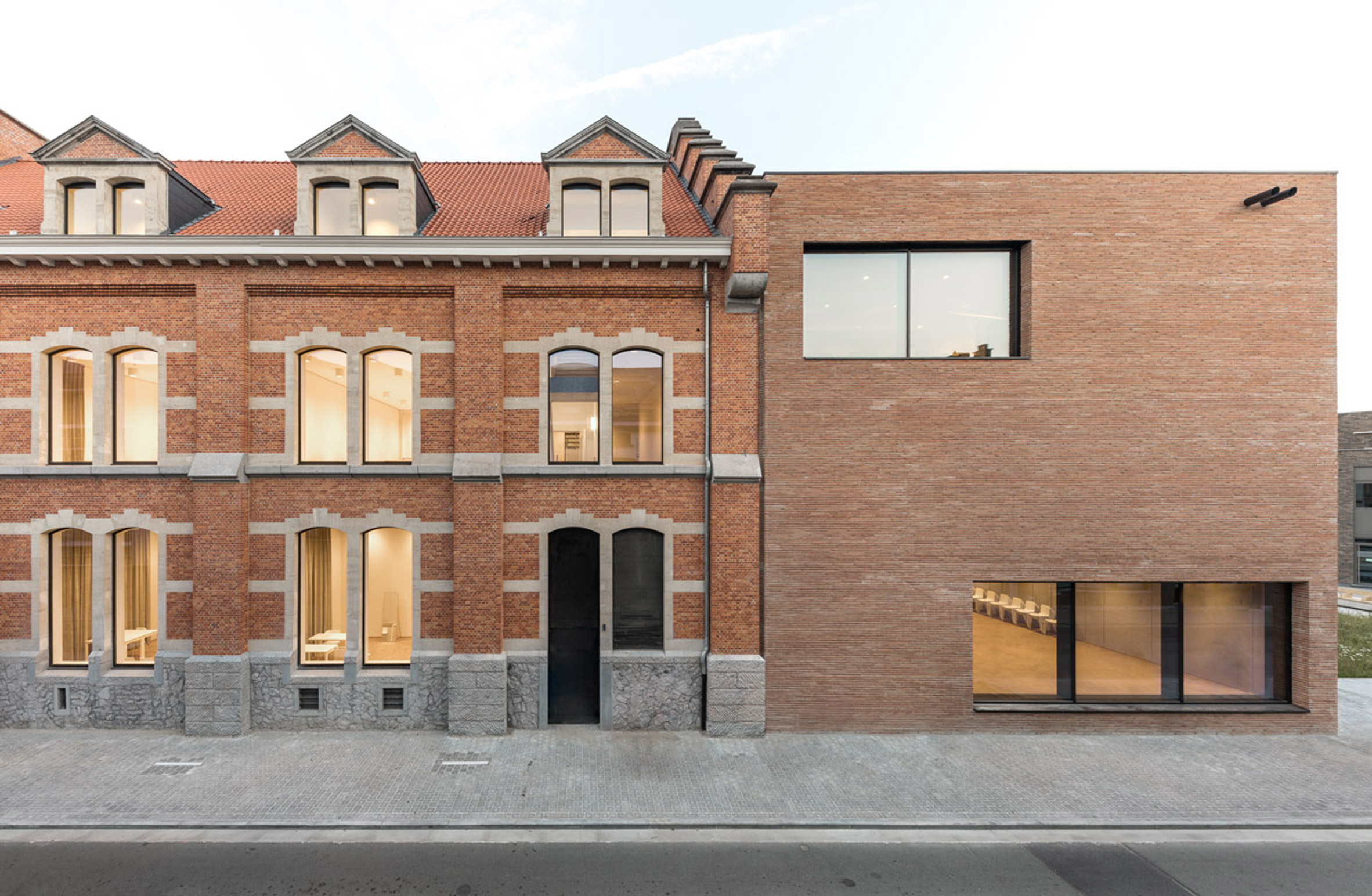 “It’s a city from the middle ages with lots of small streets and squares so we wanted to add a new place in that network, to really give a cultural public space to the city, and that’s what the whole project is about,” explained Vincent Panhuysen, partner at Kaan Architecten.

“It’s an urban project and an architectural project.” 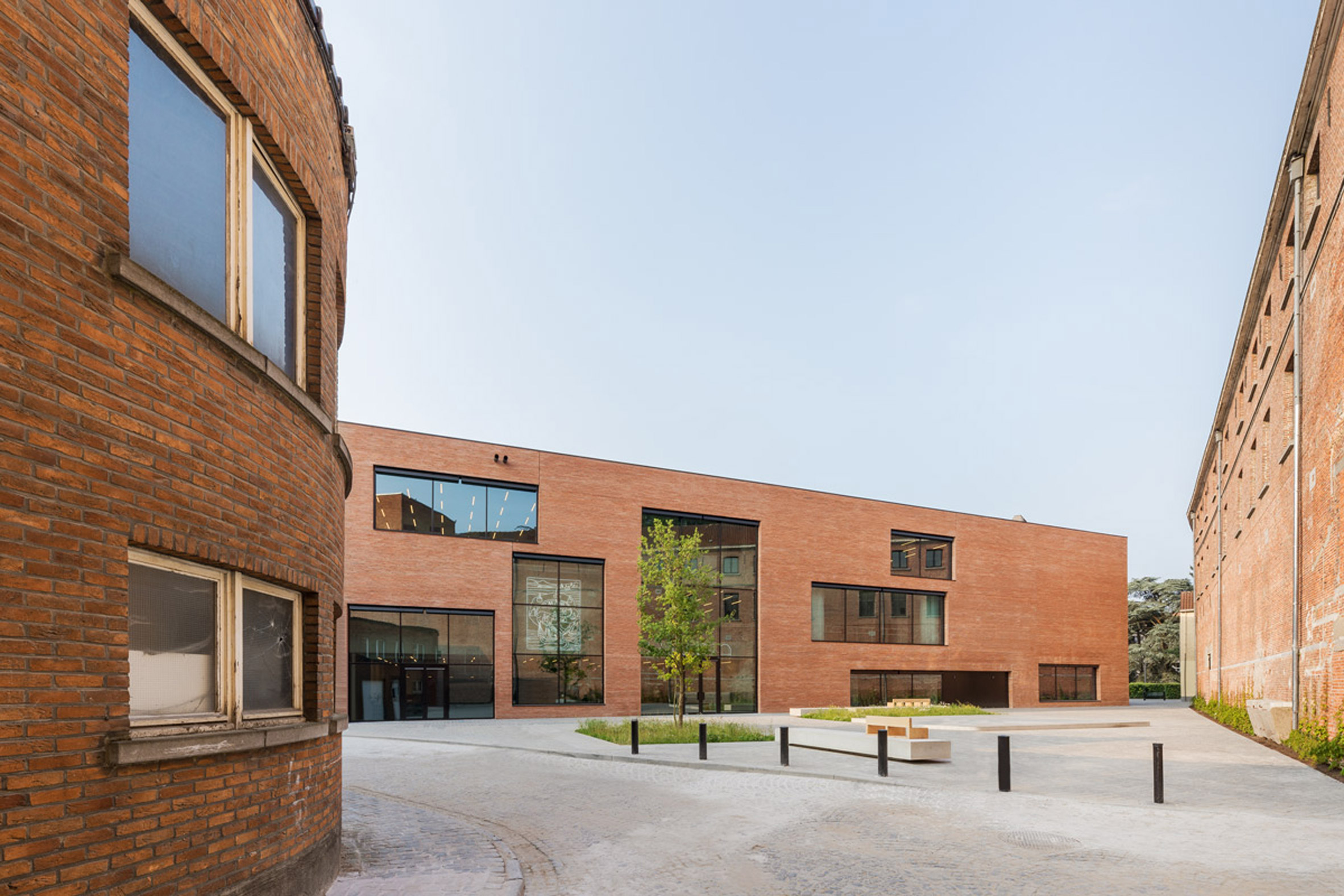 The interior of the three-storey building is a mix of public and private, with the facilities of the school arranged around a central, columnless, concrete void that is used as the library.

The Oak book cases are almost full height to make it seem like they are supporting the building. Thick, cantilevered floors project into the space at various heights and exposed concrete staircases at the edges. 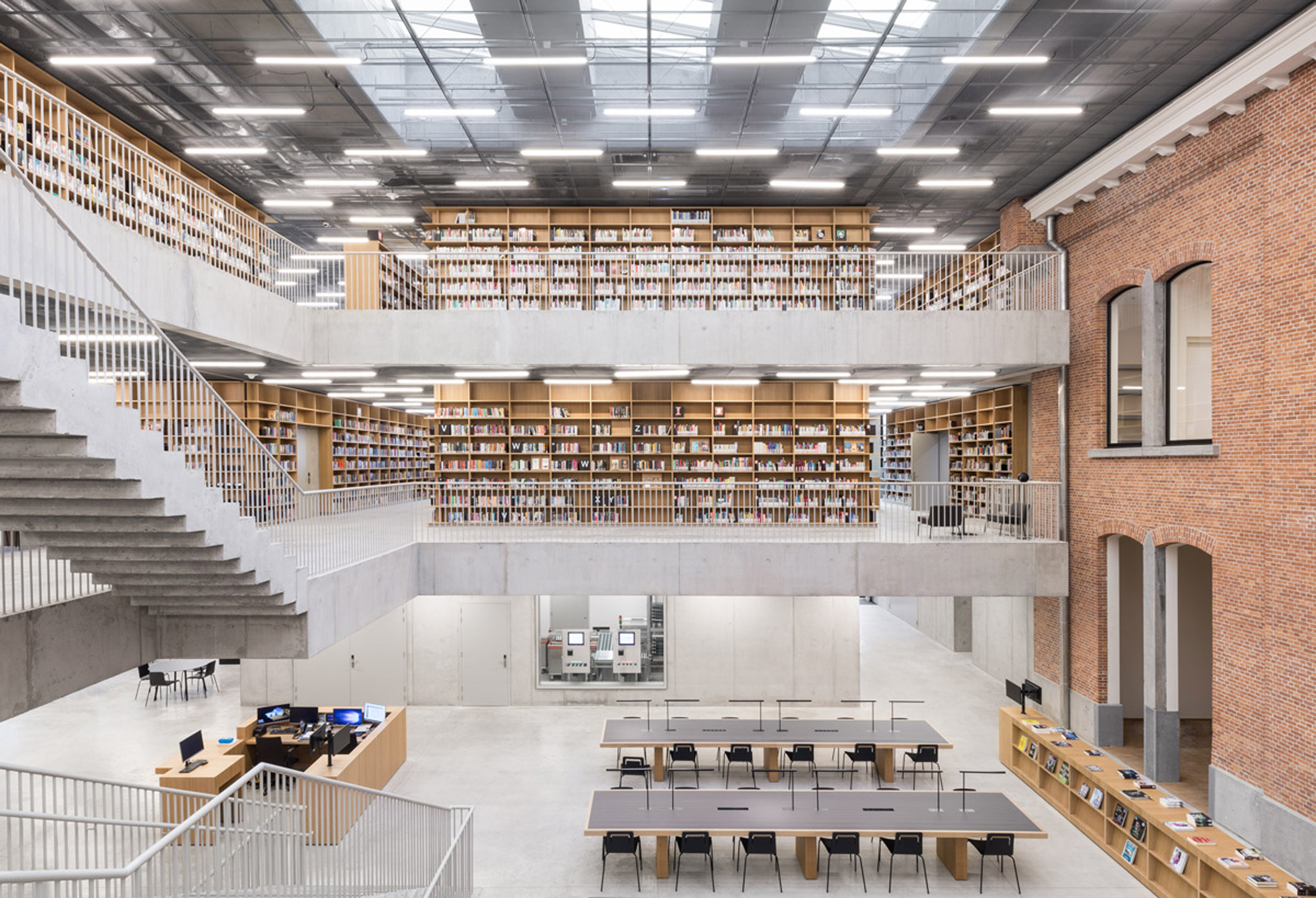 “We just made a sculpture out of shutter-moulded concrete,” Panhuysen told Dezeen. “You don’t need columns. It’s all very low tech, easy, and also quite cheap, because we didn’t have a big budget.”

“But the atmosphere is really good. It’s quite calm and a good way to expose both the books and the programme,” he continued.

The music and theatre rooms are isolated within acoustic boxes, created using suspended concrete floors, double-glazing and sound-proof doors. This allowed the architects to mix the quite space of a library with the very noisy spaces of the school. 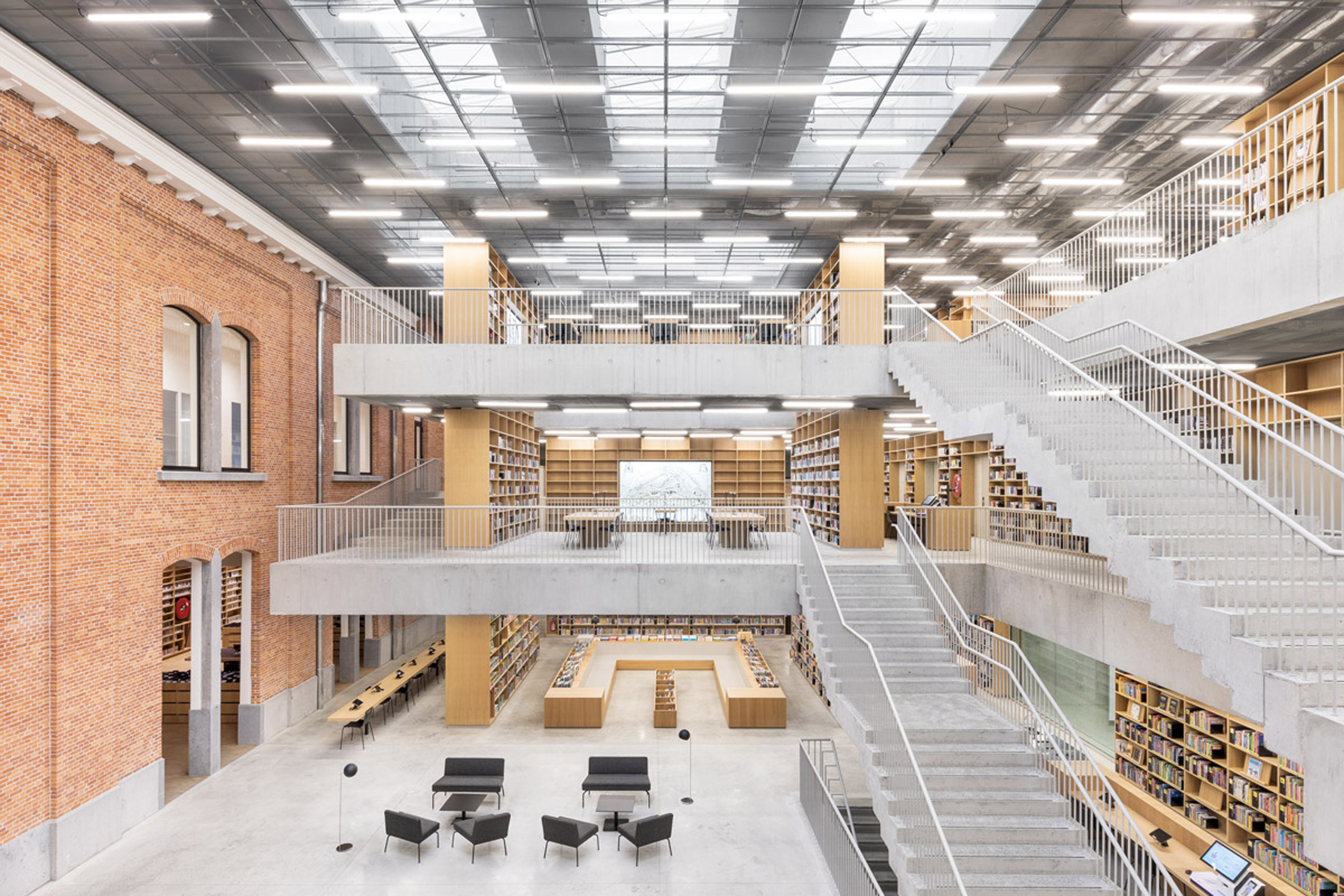 Glazed, internal openings – including the windows of the former school that have been revamped with new sills – connect the classrooms to the library, while huge windows as wide and as tall as the classrooms are inset into the facade of the new building to connect it to the city.

“It’s not the most obvious combination, one is for sound and the other is for silent, but it gives you the possibility to create a place where people meet from different generations,” said Panhuysen.

“It’s like the living room of the city, that’s also how they use it right now.” 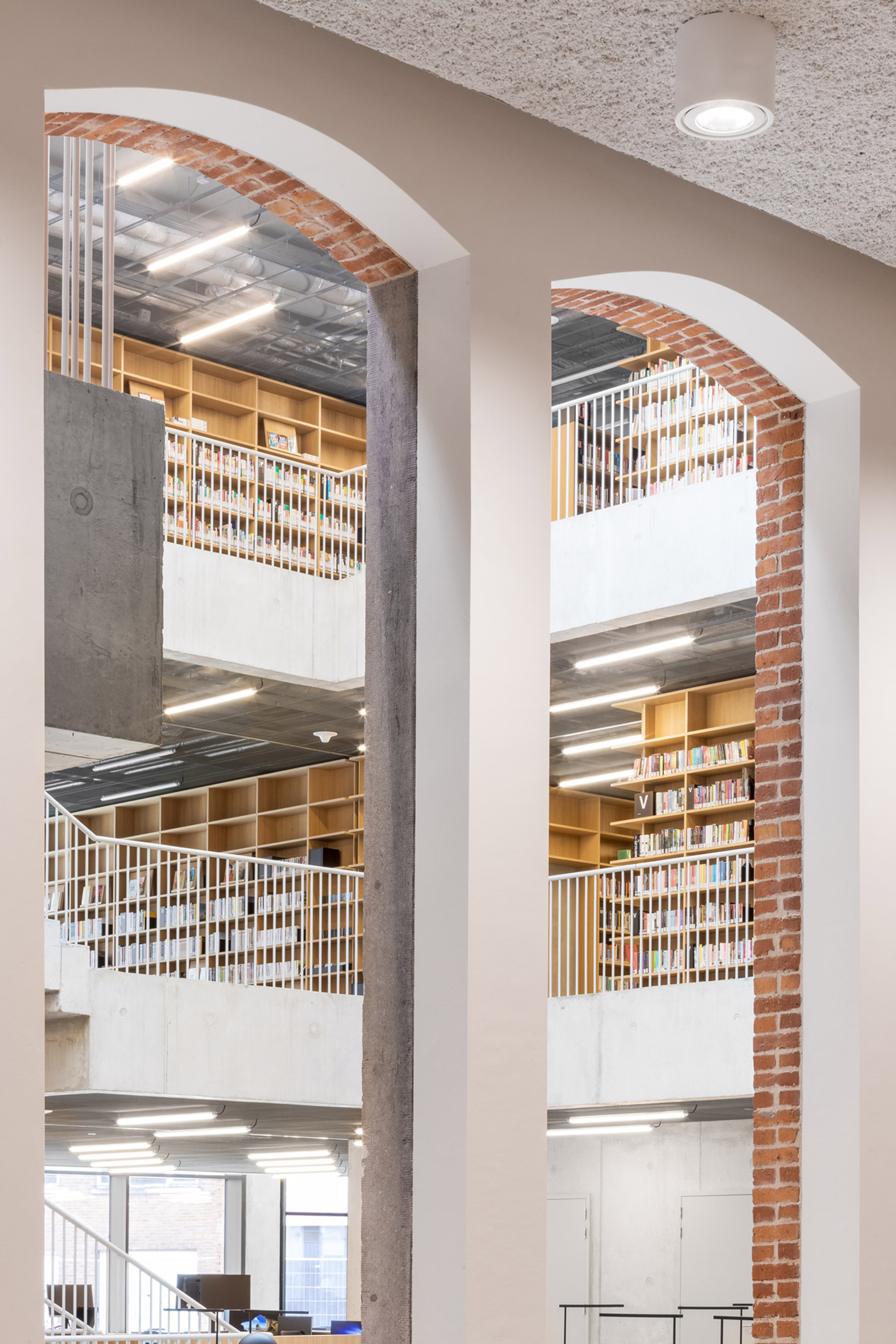 “The acoustics were hell to design – a box in a box was the only way we could manage it, but it really makes an interior in which people can discover each other by listening, making music, reading or just observing,” he added.

The old brick school building acts as a cornerstone for the project, containing the performing arts school’s music and theatre classrooms and offices, as well as the art literature collection.

The new addition is clad in long, flat bricks made using an orange-red, local clay to create a connection to the existing building and the medieval heritage of Aalst. 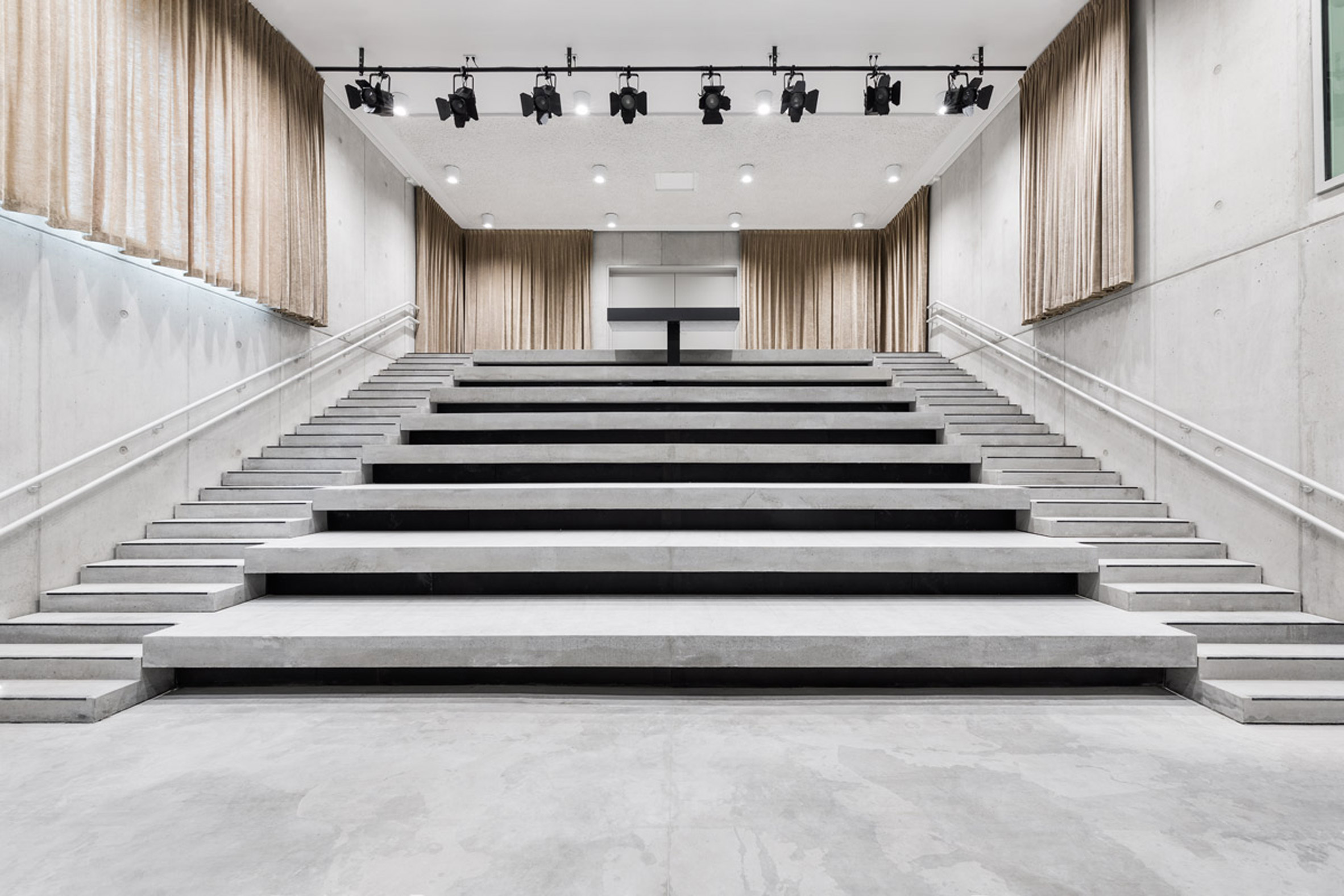 The ground floor contains most of the public spaces, with a main reading area, the music and video collection, children’s reading room, an auditorium, restaurant, a youth workshop, a small theatre for reading with children, and a music classroom big enough for performances. 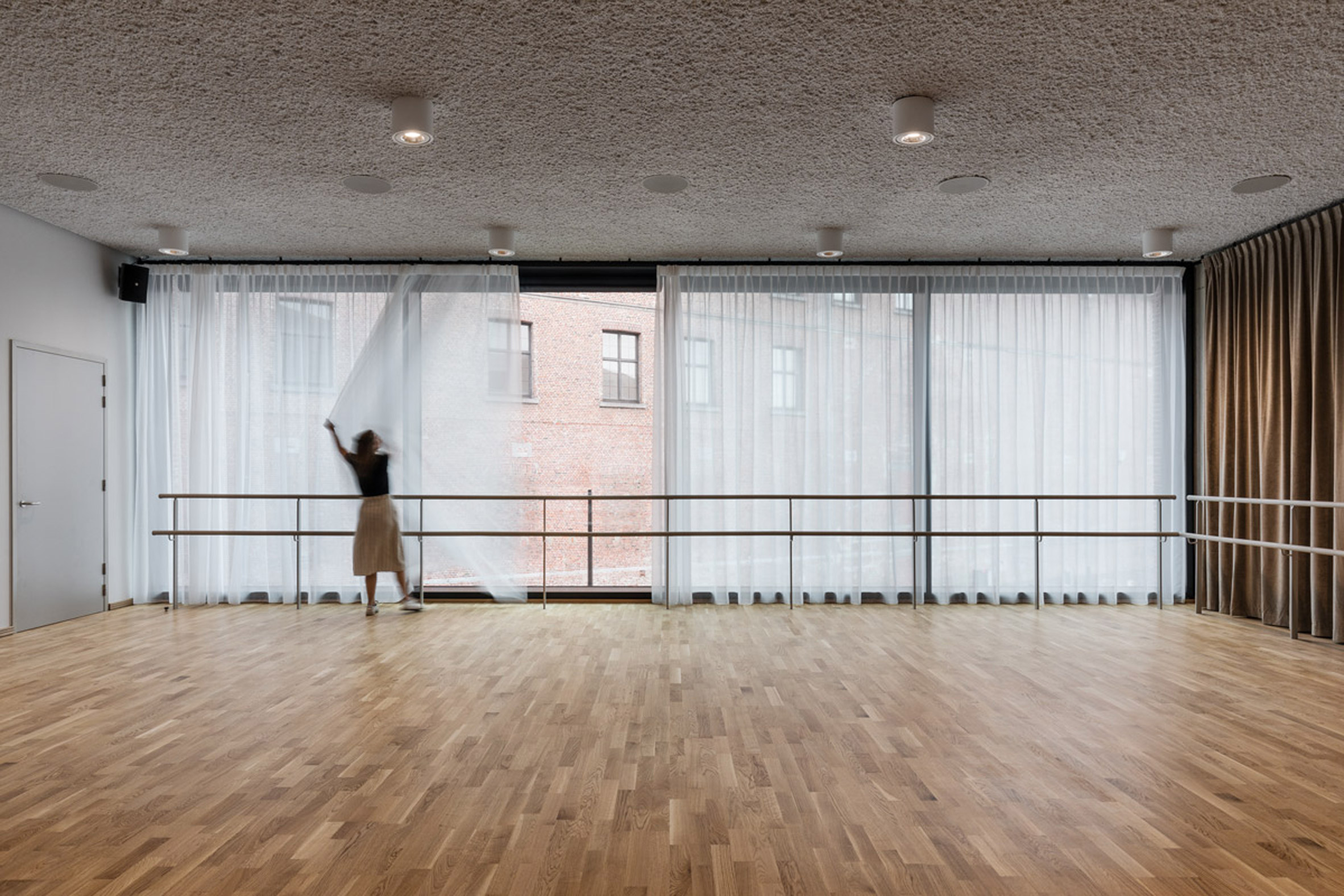 The second floor is predominantly classrooms, and a large computer area and meeting room, but also has more public reading areas.

Based in Rotterdam, Kaan Architecten is behind some of the most significant public projects in the region, including the new Supreme Court of The Netherlands and a new terminal building at Amsterdam Schiphol Airport.

Other recent Belgian architecture projects that combine historic bricks and contemporary concrete include Klaarchitectuur’s studio inside an old channel in Limburg and WAW Architects; concrete extension to a former orphanage in Brussels.

Photography is by Delfino Sisto Legnani and Marco Cappelletti.