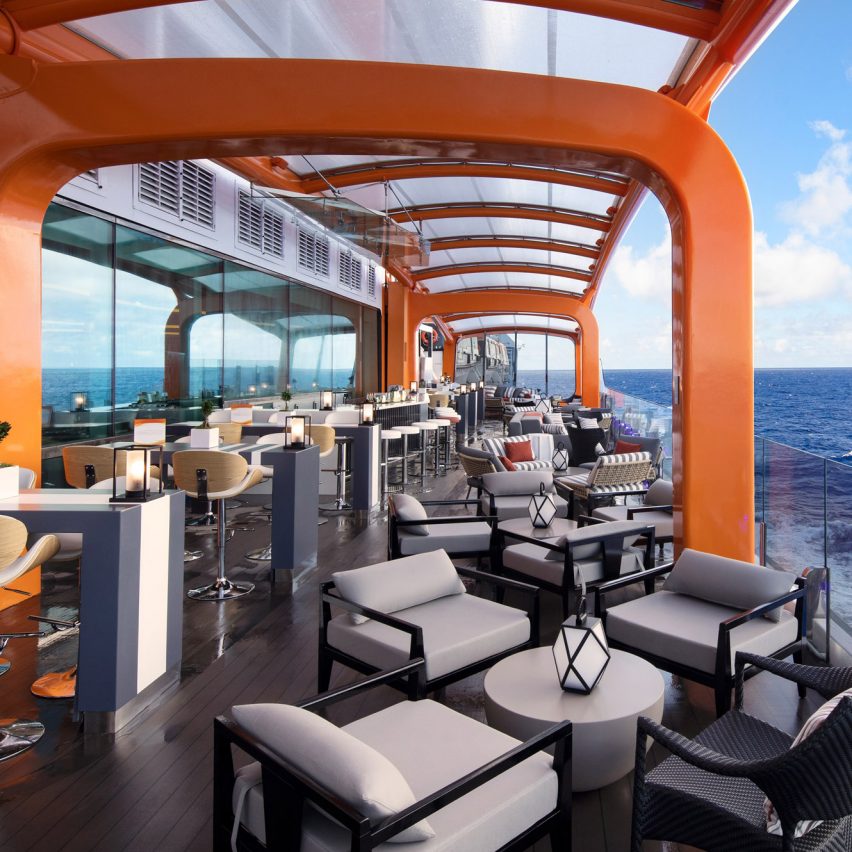 The cruise ship, called Celebrity Edge, has 1,500 suites designed by British interior designer Kelly Hoppen, who also fitted out the world’s first cantilevered deck that can move up and down the ship’s exterior.

The moving deck, or Magic Carpet, is the size of a tennis court and travels 16 storeys up and down the side of the ship through an orange structured hoop system, with the ability to dock at four separate locations.

Its design was masterminded by architect Tom Wright, who designed the Burj Al Arab hotel in Dubai, with the interior decoration completed by Hoppen.

Hoppen’s interiors are often pared back and neutral in tone. She was initially unnerved by the bright colour of the Magic Carpet’s structural elements, but integrated this into the design.

“Of course, for me, the bright orange wasn’t an ideal base colour to work with,” she told Dezeen. “However, this inspired the idea of nautical design somehow, and of using greys and blacks alongside burnt oranges with stripes, textures and different materials to create an inviting space.”

The Magic Carpet can be attached at four levels including deck two where it forms an extension to the embarkation station where guests join the ship.

It can also be attached at deck five where it completes the footprint of a seafood restaurant, deck 14 where it extends the pool deck and deck 16 at the top of the ship where it creates a large dining area.

The interior of the Magic Carpet can be reconfigured depending on where the exterior deck is docked, in order to blend with the existing space.

“Everything is totally moveable and the neutrals mean that accessories can be added in to create a changeable design also,” explained Hoppen.

“When I designed the space originally I designed it as motionless space and then worked backwards to ensure anything that was chosen such as furniture and accessories was 100 per cent moveable,” she continued.

As well as the Magic Carpet, Hoppen designed 1,500 suites for the ship, a variety of state rooms and the on-board spa.

Other designers involved with the project include Patricia Urquiola, who designed Eden, a lounge area at the rear of the ship with a triple-height ceiling, and a huge glass wall that offers ocean views and required almost 650 square metres of glass.

For the design of this space, the Spanish architect and designer looked to the golden ratio, a mathematical formula that informs many of the curves found in nature. Urquiola also decorated the Cyprus restaurant and The Club.

French design duo Patrick Jouin and Sanjit Manku, who together run the design studio Jouin Manku were behind the Grand Plaza.

The space features a large chandelier composed of five levels of 765 blades with inlaid LED strips that change colour depending on the time of day.

Celebrity Edge, which is owned and operated by Royal Caribbean, starts each voyage at a cruise terminal in Florida’s Port Everglades. The boat is exactly as long as London’s Shard skyscraper is tall.

Lisbon’s cruise terminal, designed by João Luís Carrilho da Graça, occupies a former port site in the Portugese capital and has a distinctive folding roof, one area of which has been left flat to accommodate a viewing platform that is reached from the upper storey by stairs or a ramp.

Photography is by Steve Dunlop.