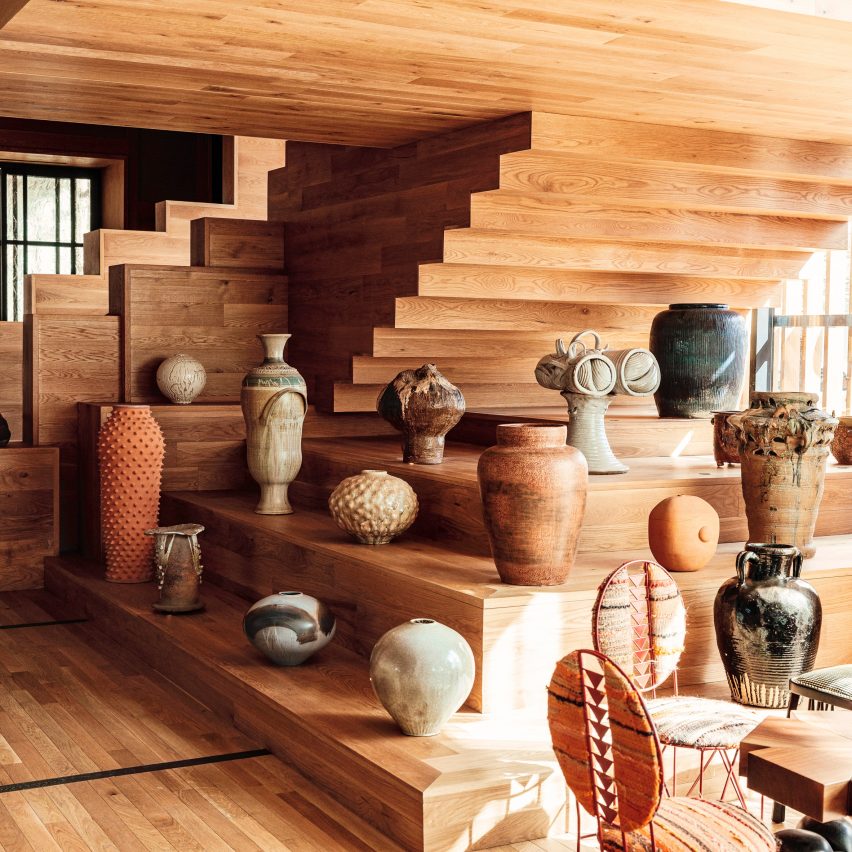 Interior designer Kelly Wearstler included eye-catching details such as vintage rugs and a white oak staircase that doubles as a ceramics display in her design for the Austin Proper Hotel and Residences.

Los Angeles-based Wearstler, who will be on the interiors panel as a Dezeen Awards 2021 judge, created the aesthetic for the 244 rooms and 99 “branded residences.”

Her interior design for the hotel revolves around local art and textiles, with some eclectic vintage elements thrown in.

A focal point is a sculptural staircase made of white oak wood with stepped balustrades.

An interesting backdrop has been created by showcasing the underside of the staircase steps, while a ziggurat of plinths below is used to display a range of glazed earthenware pots and vases.

Custom panelling along the walls of the hotel is made from cypress wood, charred using the traditional Japanese technique of Shou Sugi Ban to create a tiger-striped effect.

Mismatched vintage rugs run up the stairs, and a mix of chairs and armchairs upholstered in patterned fabric are scattered around the lobby.

Tiles by Austin ceramicist Rick Van Dyke appear as inlays on furniture such as cabinets, and fibre artwork by local artist Magda Sayeg, known for her yarn bombing installations, are hung in the bedrooms alongside antique mirrors.

There are three other eateries in Austin Proper Hotel and Residences including Peacock, which serves Mediterranean food against a backdrop of parquet floors covered in more vintage rugs and walls covered in Portuguese-style tiles.

A private dining area, screened off by walls made of full wine racks, features botanical wallpaper.

The interior of The Mockingbird, a coffee shop that serves Greek frozen yoghurt, was decked out in more colourful tiles by Wreastler.

All over the hotel, walls are hug with art and niches are filled with ceramics. Pot plants filled with hardy desert species add splashes of greenery.

The 99 apartments attached to the hotel also have interiors designed by Kelly Wearstler. Their occupants have access to the hotel’s amenities as well as a private pool, along with dog grooming and concierge services.

Kelly Wearstler is an interior designer based on America’s west coast. Recent collaborations for the same hotel franchise include the San Francisco Proper and the Santa Monica Proper.

Photography is by The Ingalls.