Arched doorways, sculptural chimneys and a pyramid-shaped roof are among the quirky details that architecture studio Kennedy Nolan has used to add character to this east Melbourne home. 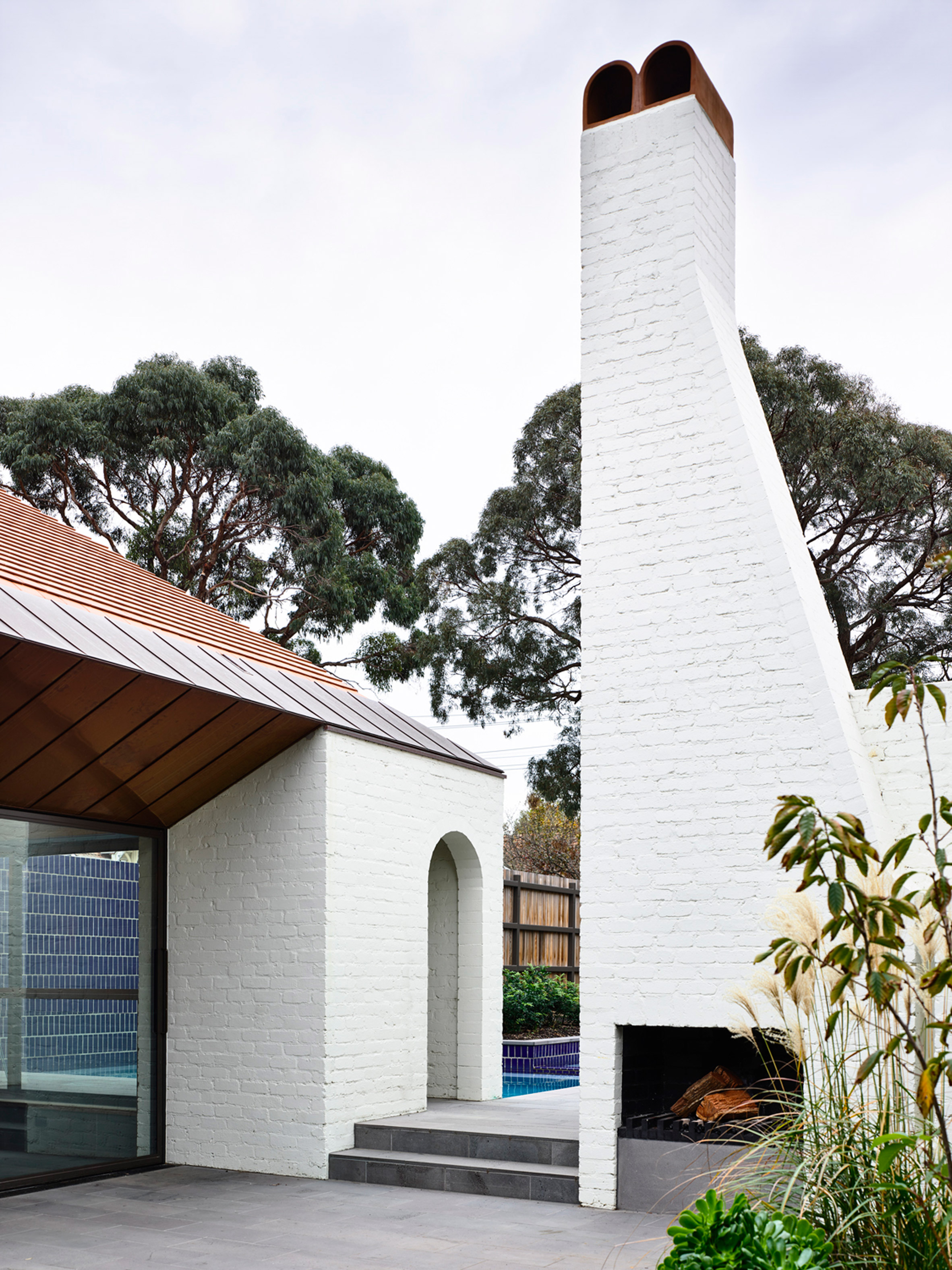 Deepdene House is located in a suburban neighbourhood filled with Edwardian properties and verdant gardens. Kennedy Nolan describes its appearance as “roofs and chimneys emerging from lush tree canopies”. 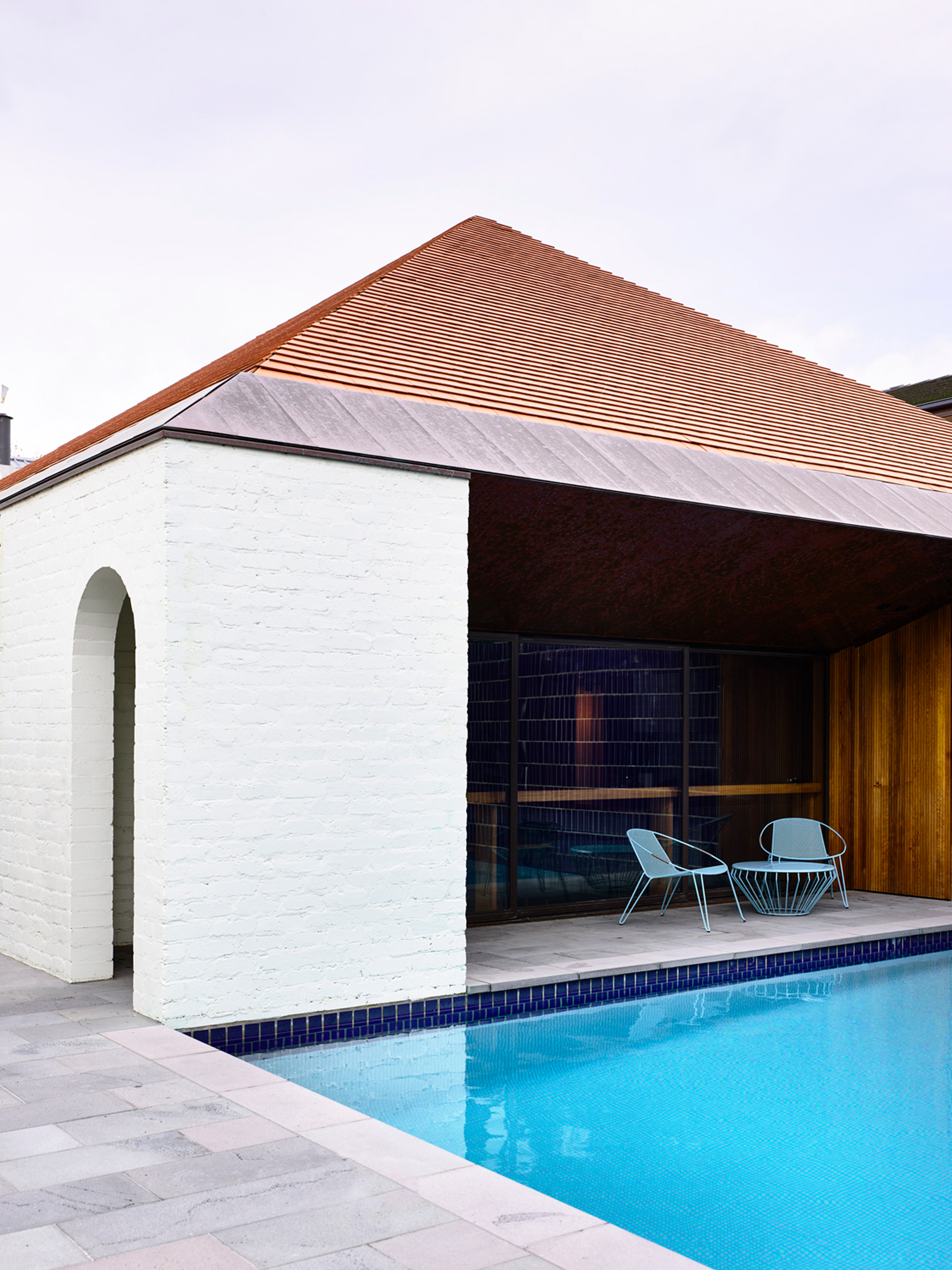 The Melbourne studio responded by designing a house that draws on Arts and Crafts architecture – a style that overlapped with the Edwardian era – through its combination of crafted materials and decorative forms.

Other details used to create this aesthetic include white-painted brickwork, a patterned semi-transparent wall and a swimming pool lined with vibrant blue tiles. 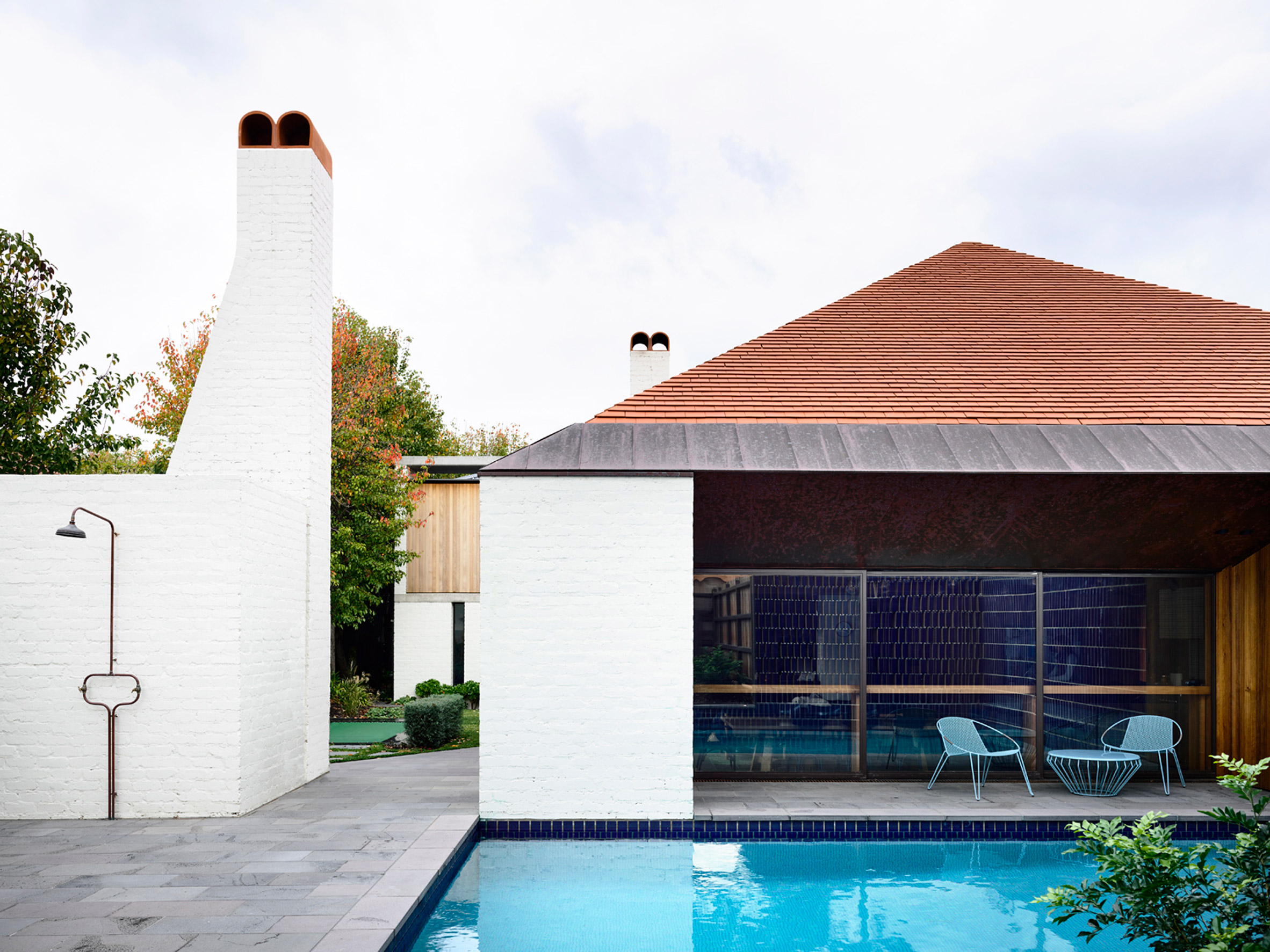 “We were asked to be considerate of the neighbours, who were very attached to the Edwardian character of the street,” explained the design team, which is led by architects Patrick Kennedy and Rachel Nolan. 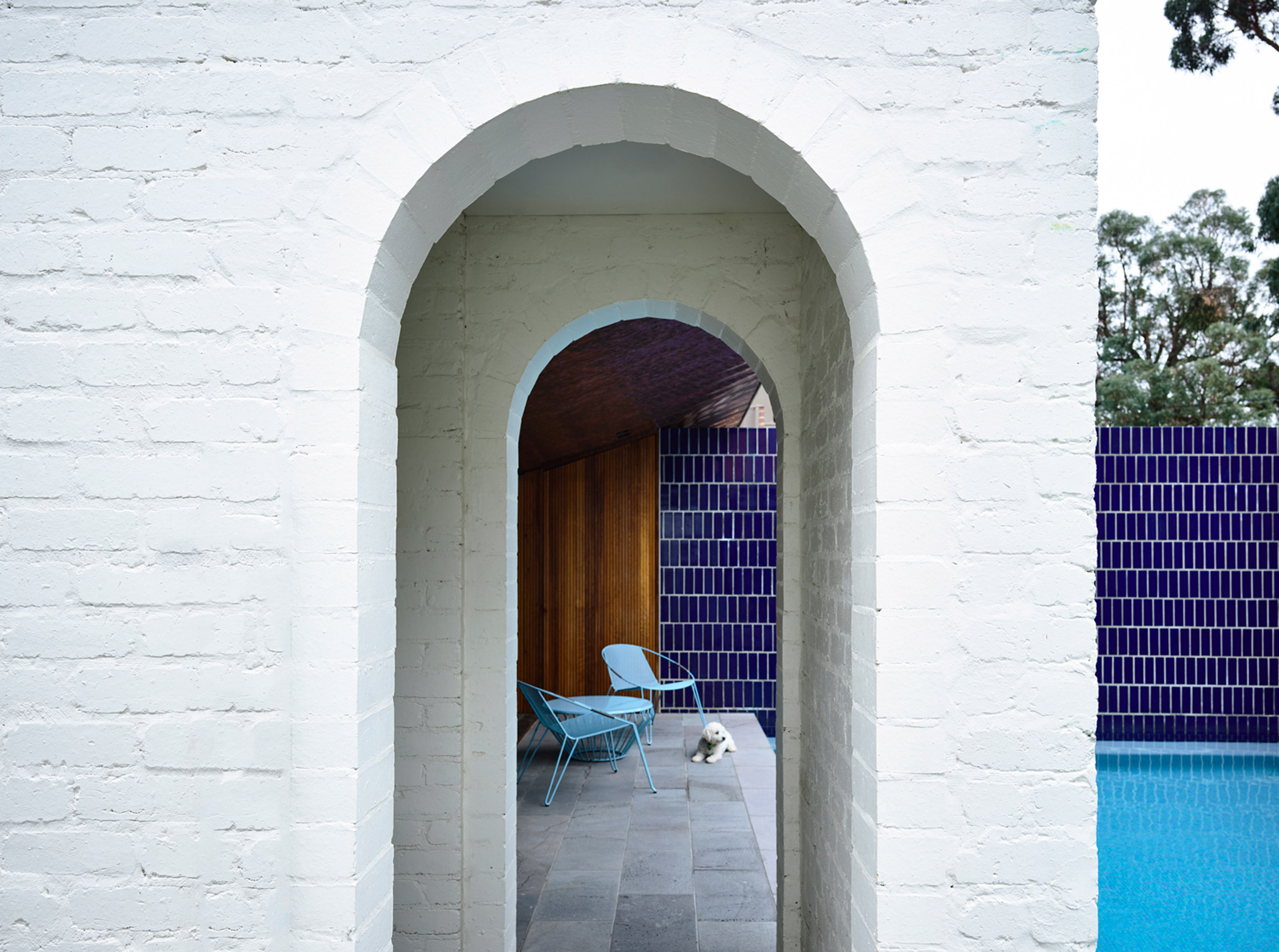 “In finding a workable model, we looked to the Arts and Crafts movement and its proto-modernist philosophies,” they continued.

“Many of our architectural interests aligned with the ideas and aesthetics of the movement: expressive function, picturesque planning, and the exposition of the crafts of building.” 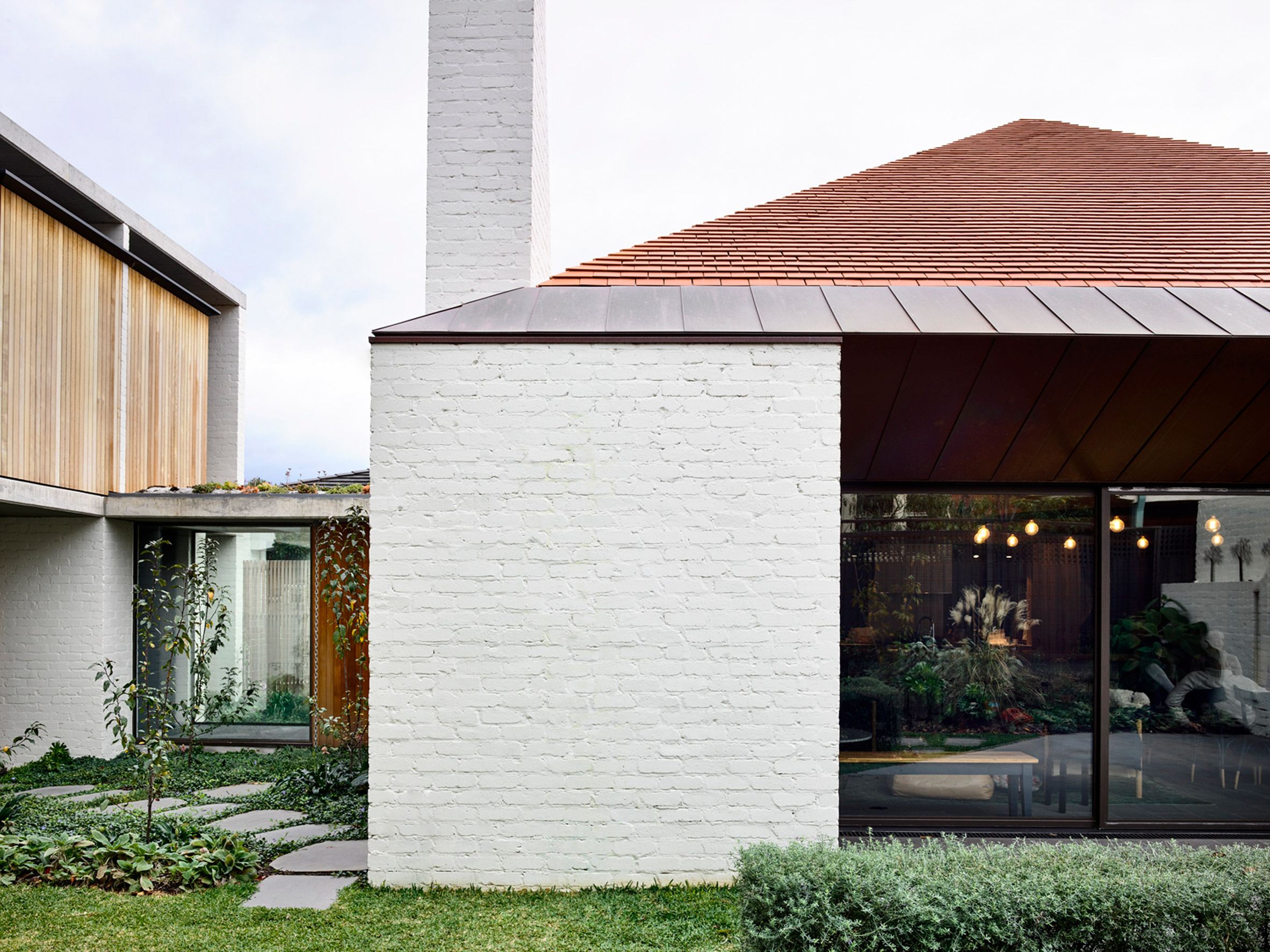 The house replaces another building that the clients had lived in previously, before briefly moving away. They found that their last home couldn’t cope with their large family – seven members in total. 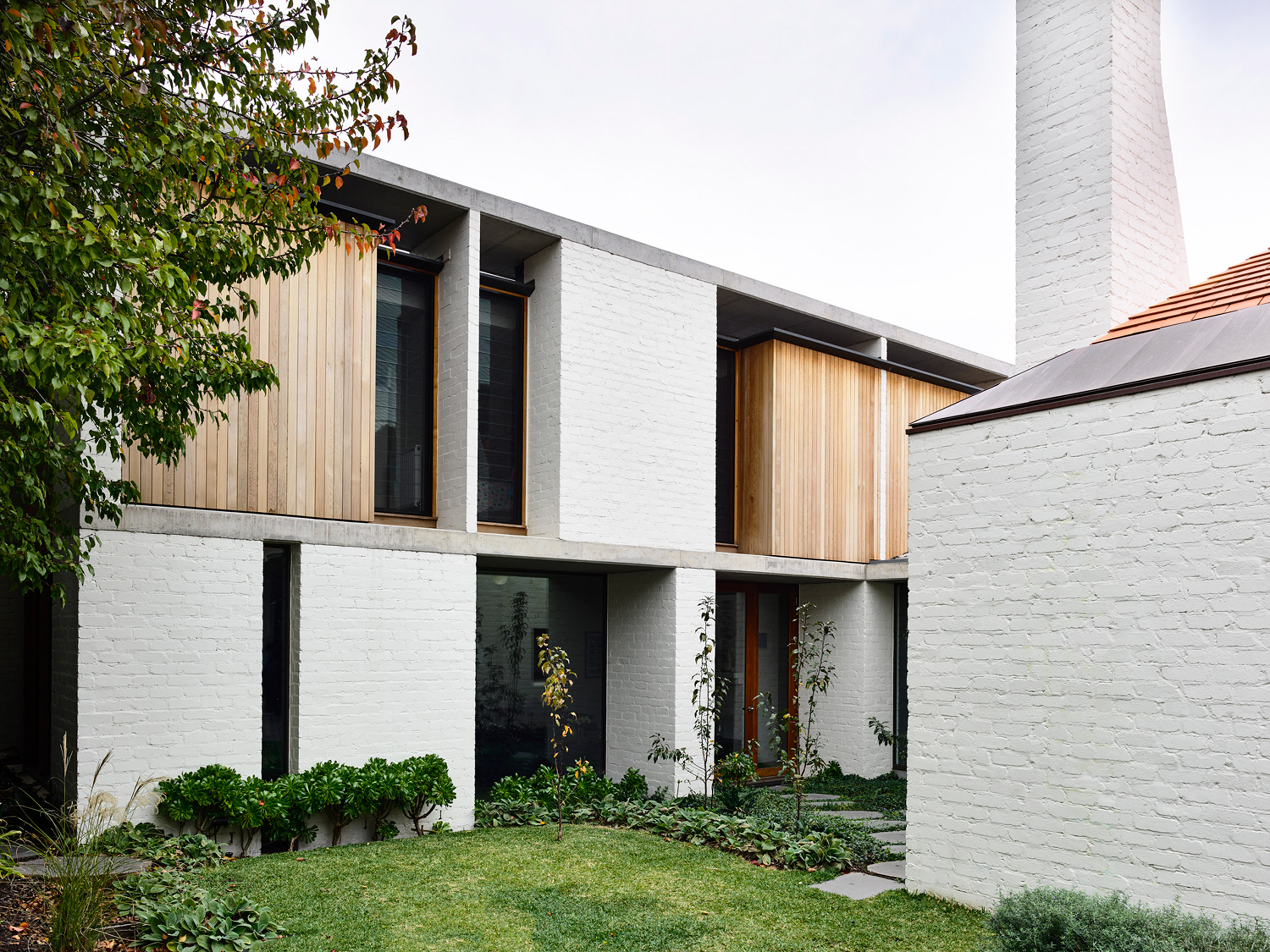 The new building deals with this by separating different areas. The family’s main living and dining spaces are located in a pavilion-like structure towards the front of the site, while bedrooms and quieter lounge areas are housed in a two-storey block behind. 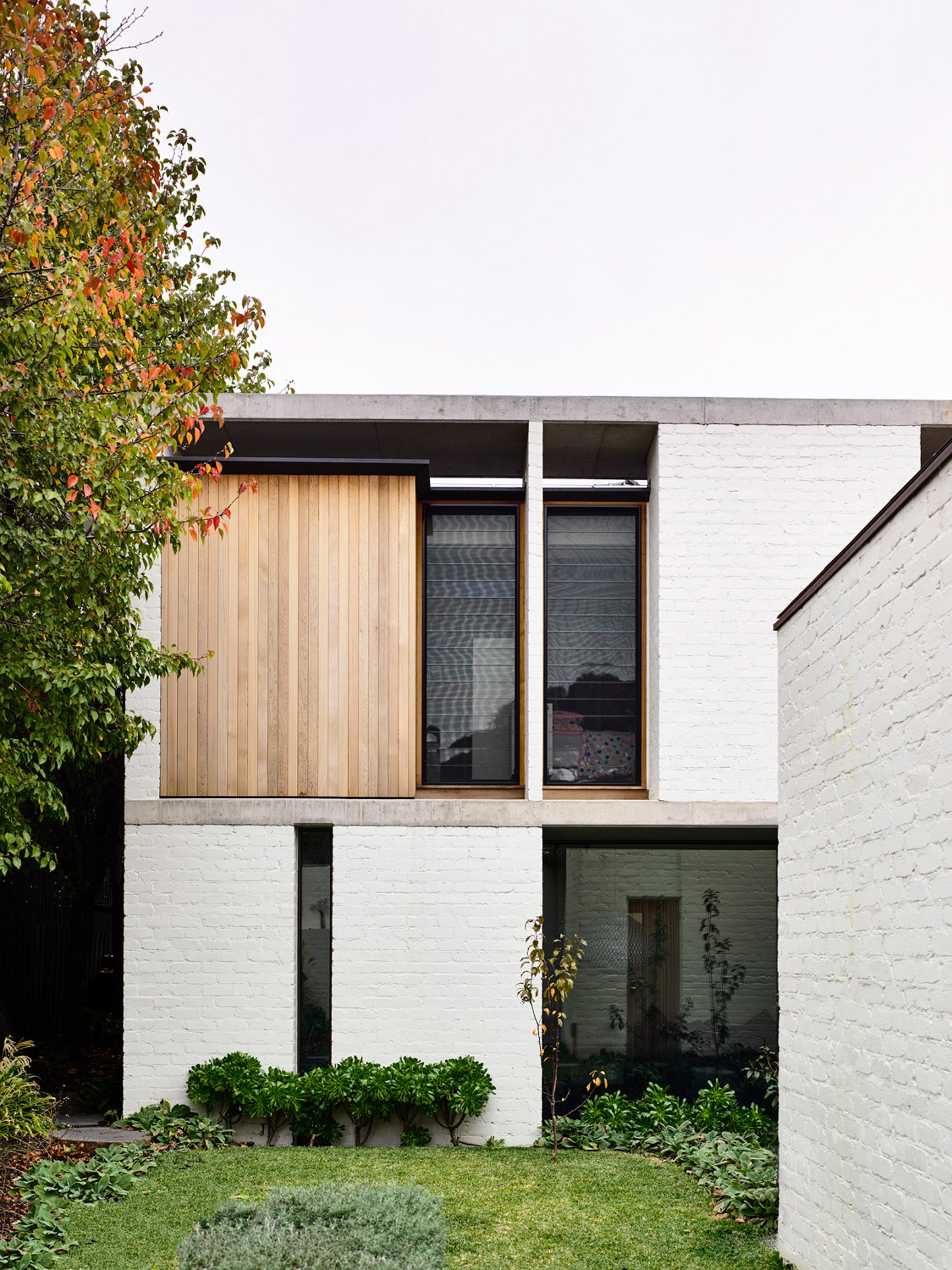 The living room block features the pyramid-shaped roof, which is clad externally with ceramic tiles and lined internally with cedar. Sliding glass doors allow the building to open out to both the swimming pool and a barbecue terrace, with the overhang of the roof creating a sheltered patio.

The barbecue itself is integrated into a sculptural chimney stack, featuring handmade Edwardian-inspired chimney flues, matching the one located above the fireplace in the main house. 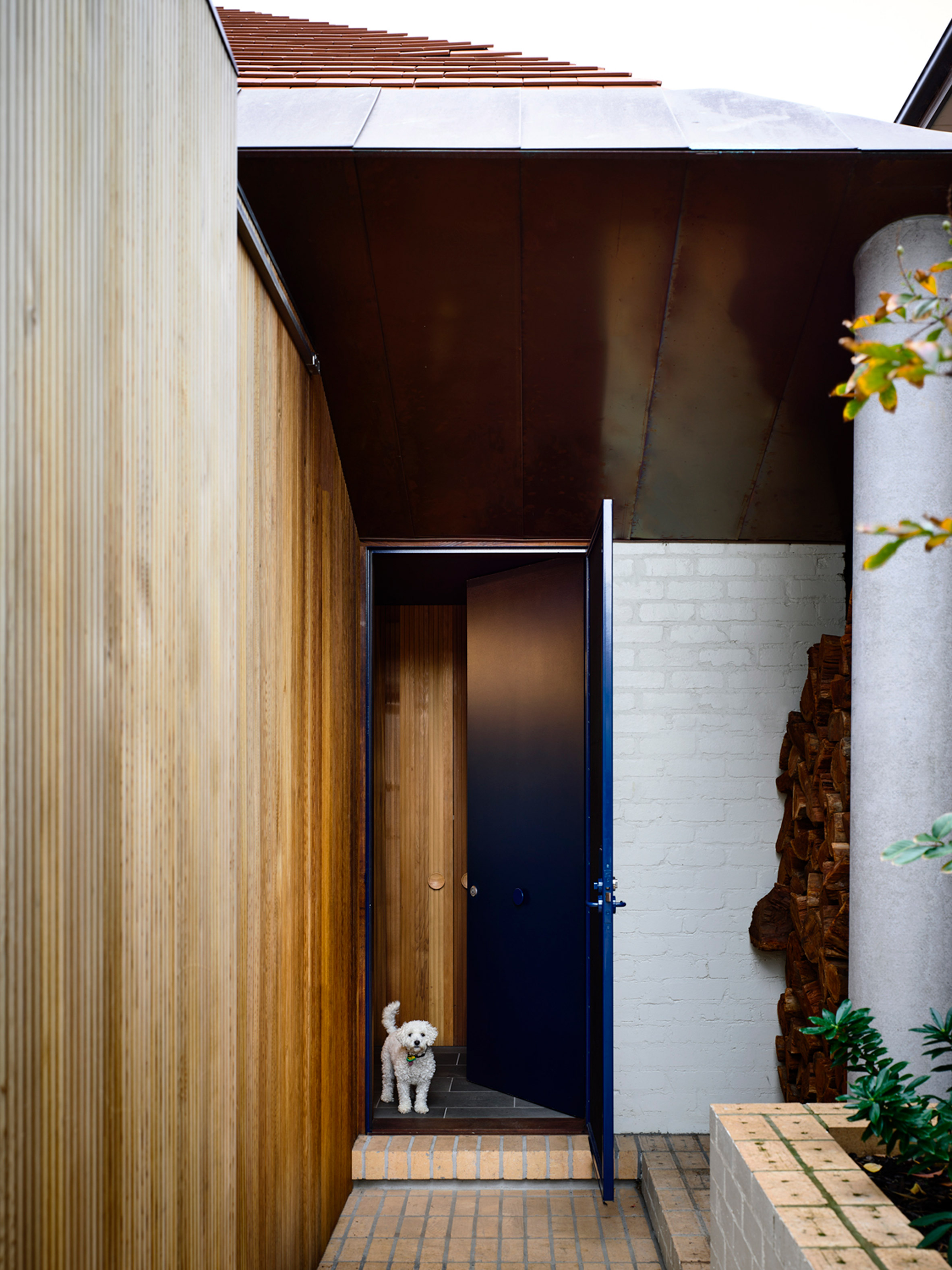 By contrast, the two-storey building at the rear of the site features a more contemporary mono-pitched roof. Apart from the master suite, all the bedrooms are located on the upper floor, leaving the ground free for other activities.

The facade of this block is divided up by different materials. Deep-set windows reveal the depth of the brickwork, while horizontal concrete stripes indicate floor slabs and vertical lengths of cedar frame built-in wardrobes. 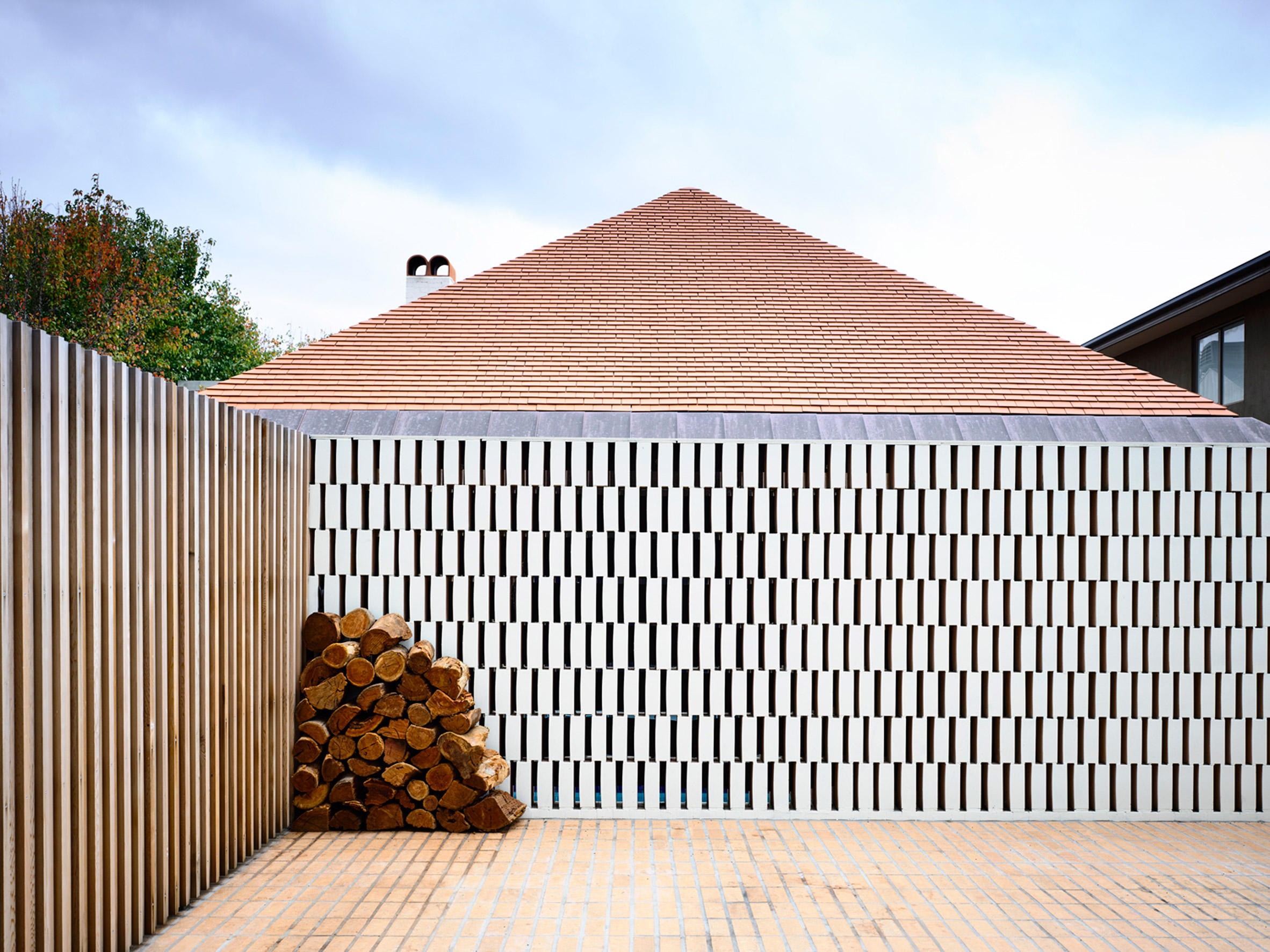 “Substantial, textural, durable, low maintenance materials and surfaces – all selected for their ability to age in place – will ensure that the house improves with age, that it celebrates patina and that the materials reach their aesthetic potential through wear and time,” said the architects. 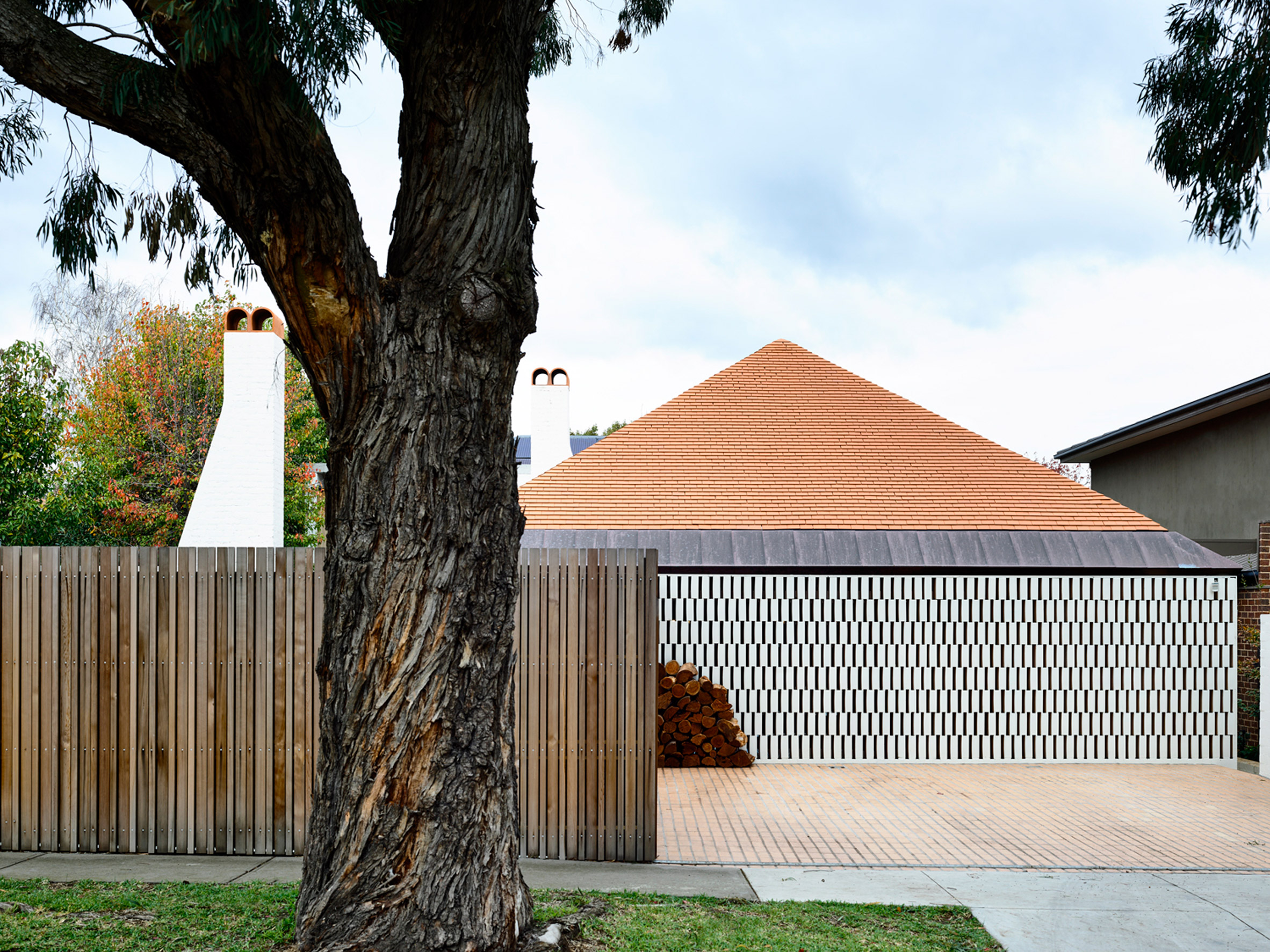 Patrick Kennedy and Rachel Nolan founded Kennedy Nolan in 1999, and their studio is based in Melbourne’s Fitzroy area.

Past projects include a house extension with a circular hole for children to climb through and a courtyard house built with recycled bricks, concrete and rough-sawn timber. 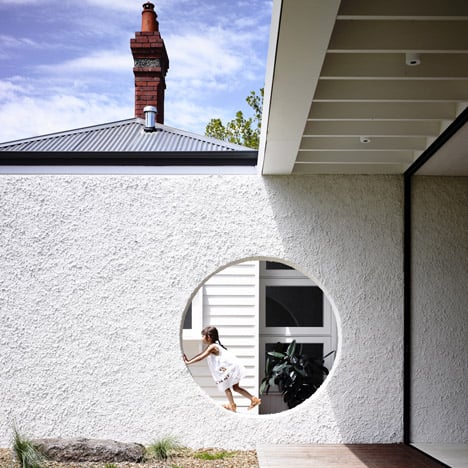