As one of India’s most influential 20th century architects, and an important collaborator of both Le Corbusier and Louis Kahn, Doshi has an impressive portfolio spanning over 70 years.

Through the work of his studio Vastu-Shilpa, he has established himself as a key figure in the development of low-cost housing and modern city planning in India, championing architecture that is true to modernist principles as well as local traditions.

The architect’s professional career began in Europe where, after graduating from his studies in Bombay, he eventually found himself an apprenticeship in Le Corbusier’s Paris office. Soon after, he was back in India to oversee construction of his mentor’s projects, first in Chandigarh, then in Ahmedabad. 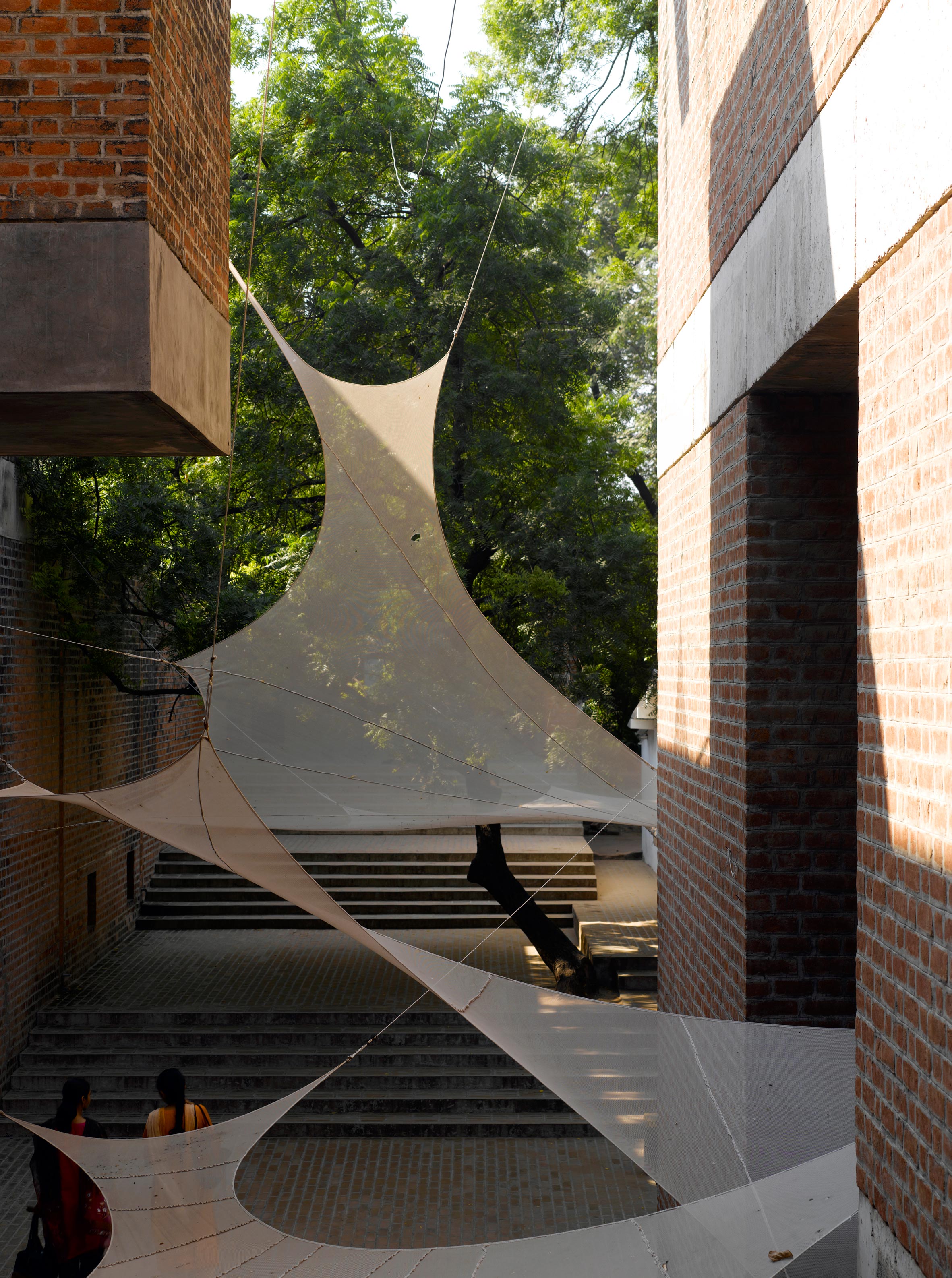 It was this second city that captured the architect’s attention – it not only became his home, but also the location for some of of his most important projects.

One of the first was the Ahmedabad School of Architecture, the design school that Doshi both founded and planned. With its simple brick and concrete buildings, shaded courtyards and staircases, and open layout, the project shows the influence of both Le Corbusier and Louis Kahn, who had worked with Doshi on a project just before, but it is also reminiscent of the traditional Indian townscape. 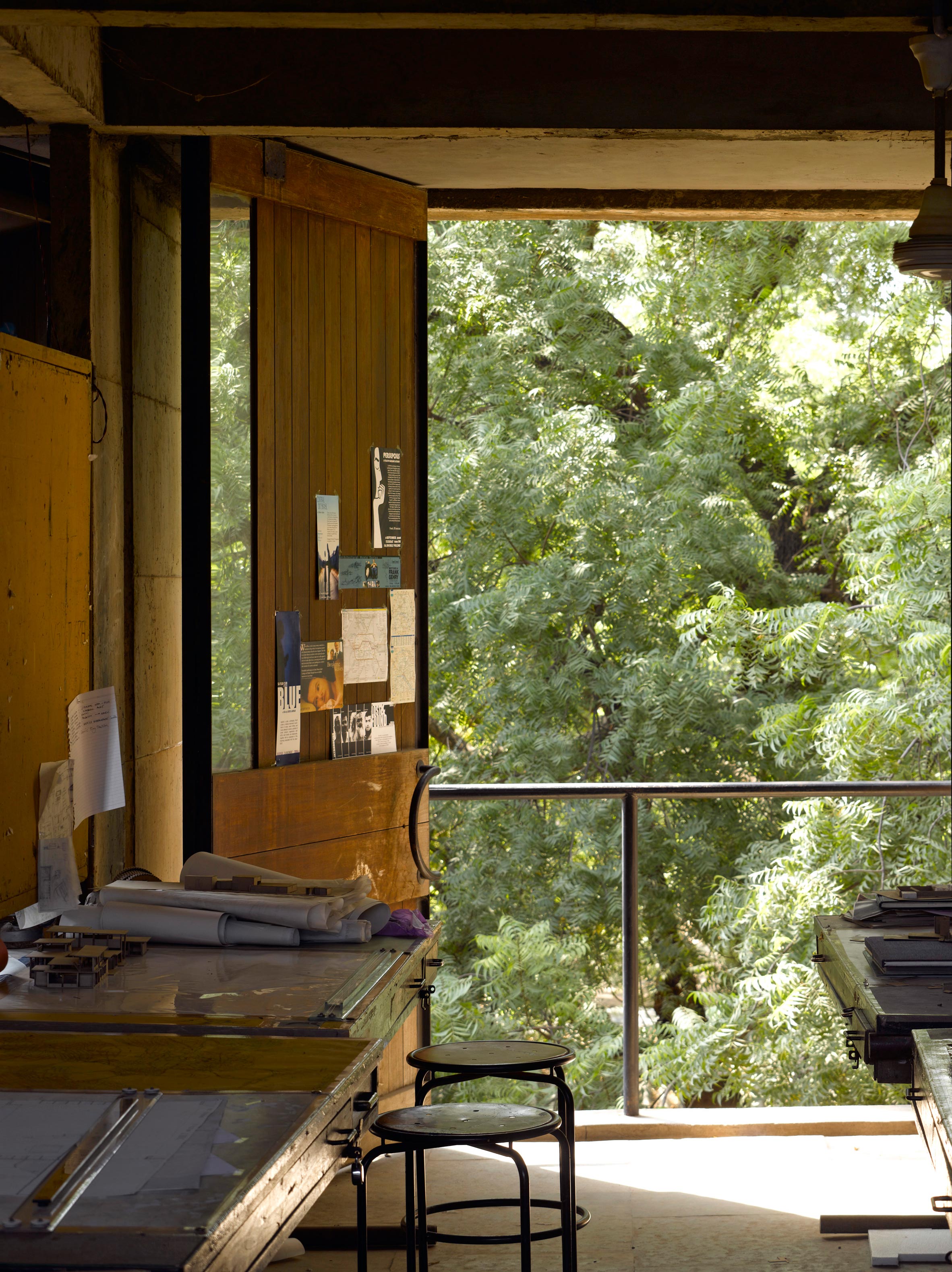 The school was completed in 1966, but continued to evolve and grow in the following decades, and was eventually renamed Cept University in 2002. Students were actively involved in designing new additions to the campus, but the focus remained the same – to create spaces that promote collaborative learning. 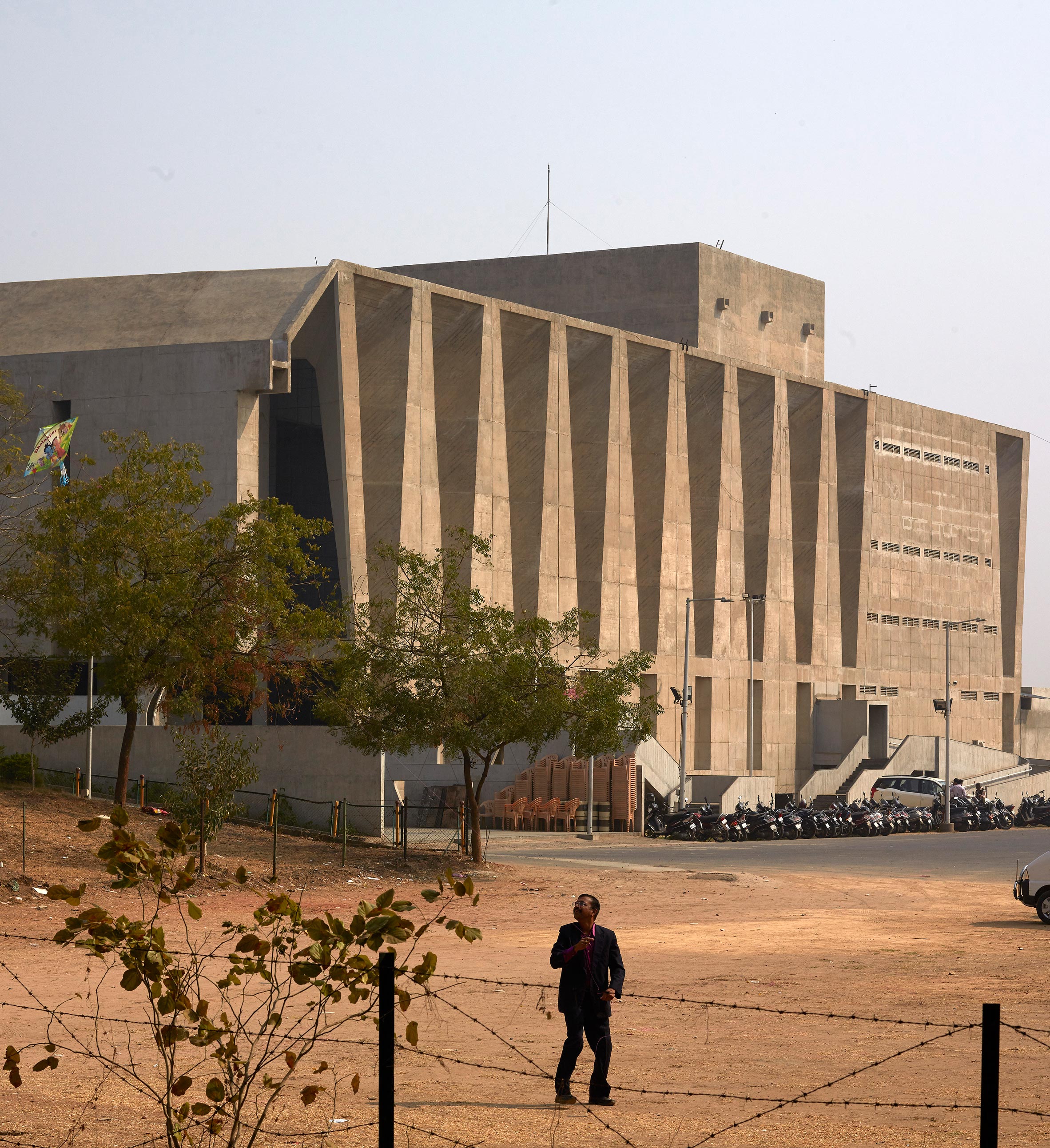 Doshi experimented with brutalism with some of his projects. One of the most notable examples is his Tagore Memorial Hall, completely in 1966.

Built in tribute to Indian writer and poet Rabindranath Tagore, this 700-seat auditorium is also located in Ahmedabad. It features reinforced concrete walls, broken up into wings that create contrasting planes of light and shadow. 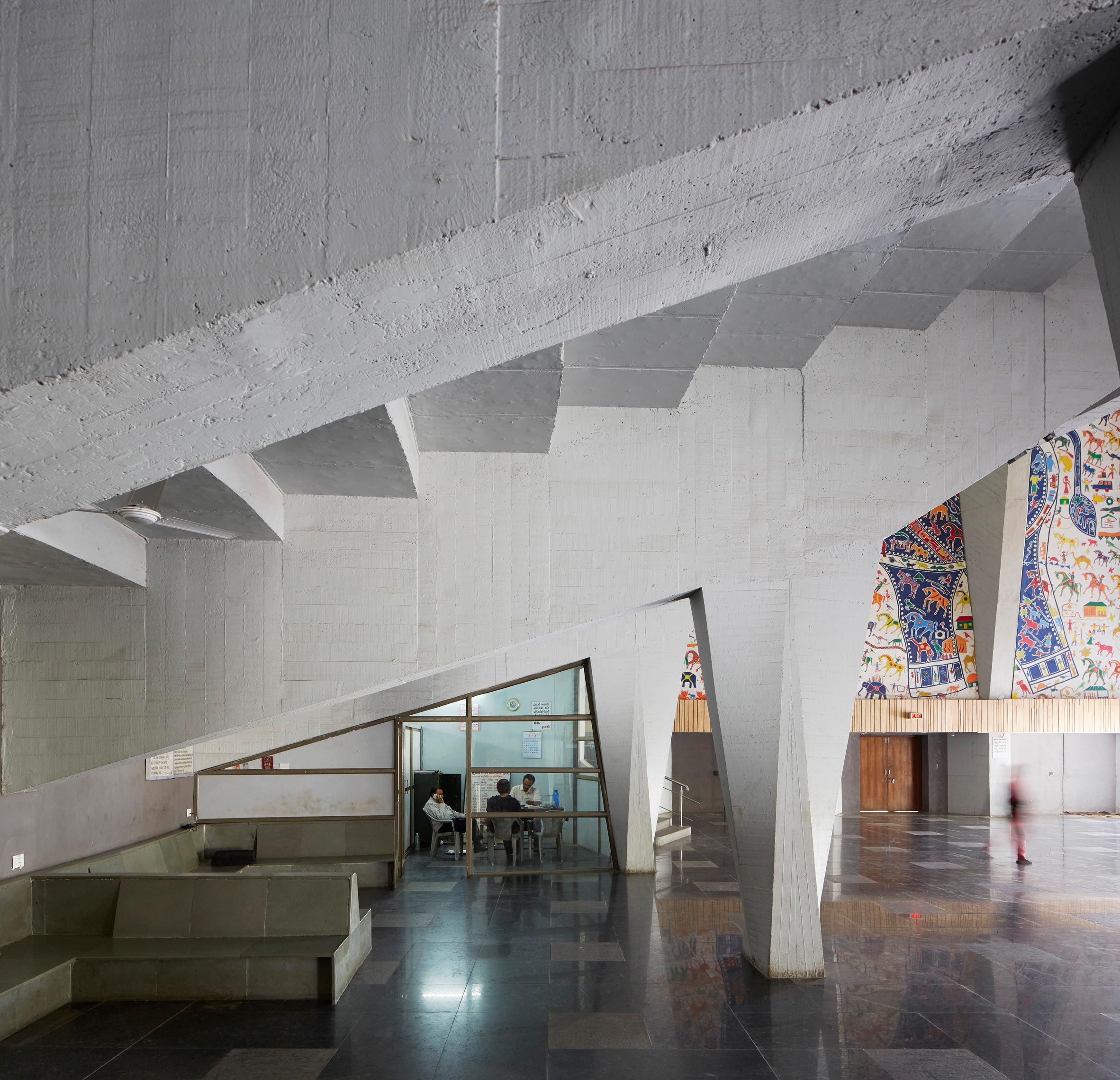 The tiered seating bowl is the most prominent feature in the building’s foyer, framed by sculptural columns and embellished by colourful artworks. Seating is built into its underside. 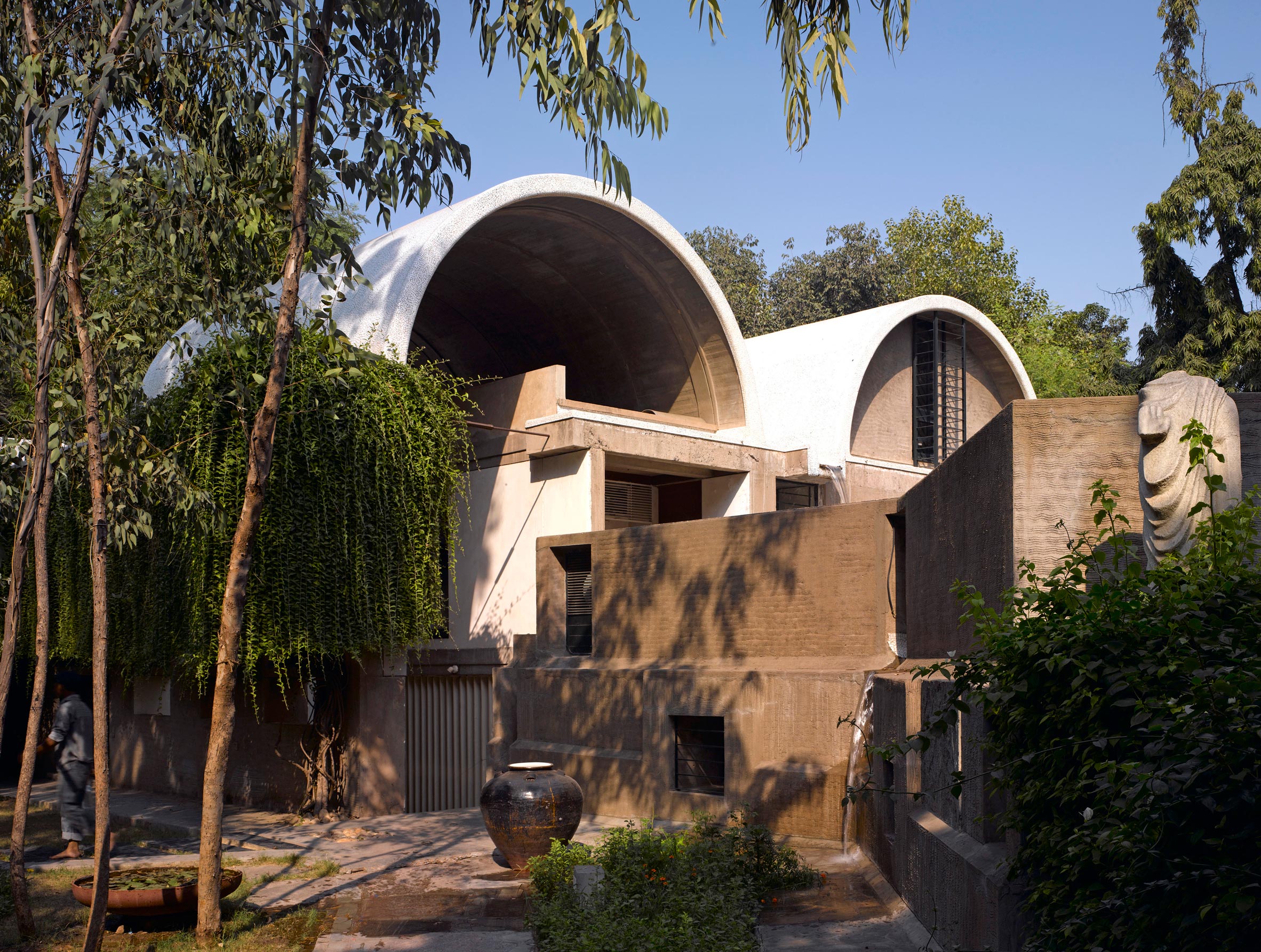 Vastu-Shilpa built its own studio in Ahmedabad in 1981. Called Sangath, this structure is defined by a pair of barrel-vaulted roofs covered in porcelain mosaic tiles. 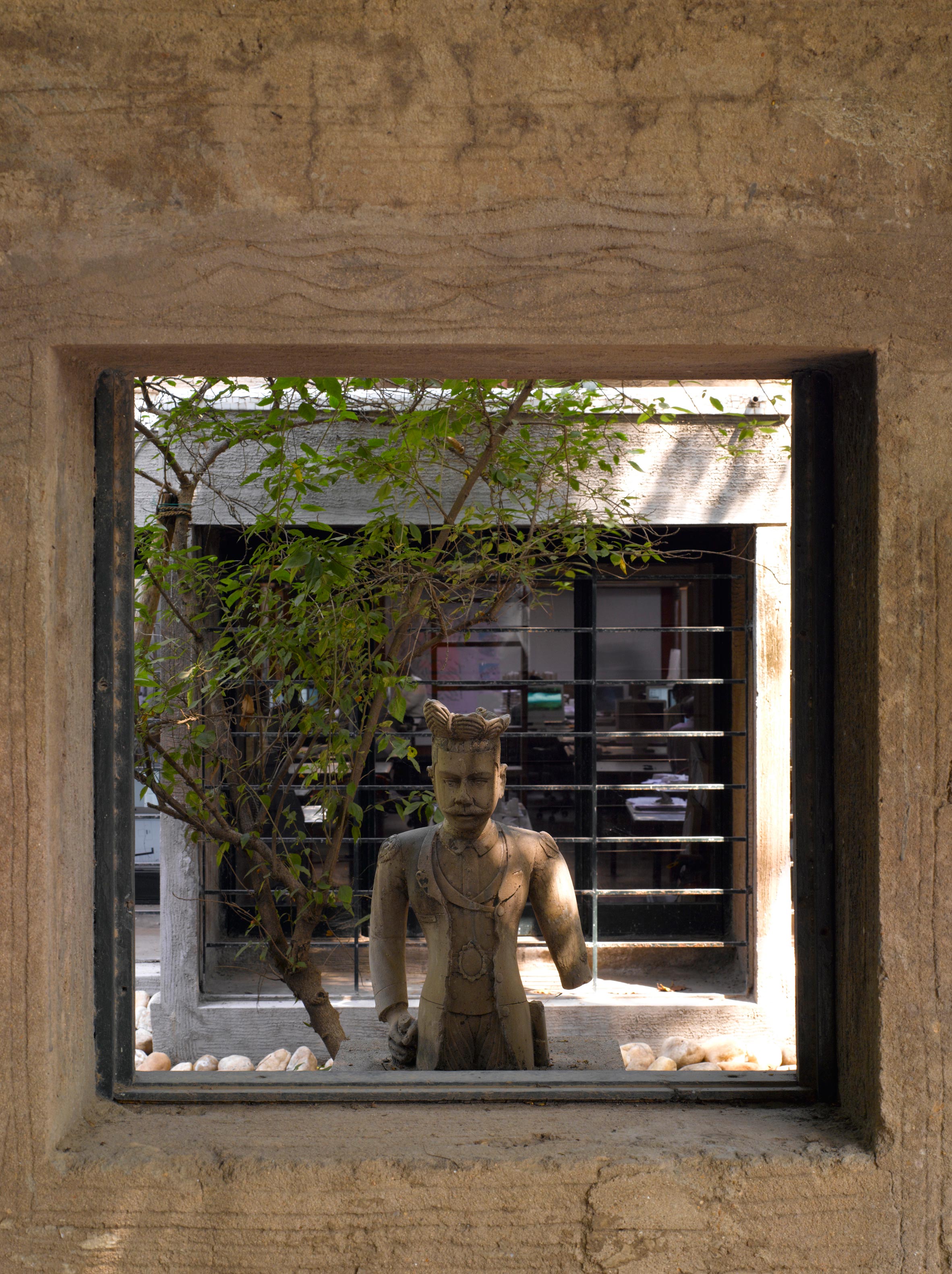 Described by Doshi’s team as “sunken vaults”, the building is partially subterranean. It is organised around a garden, and one if its features is an outdoor amphitheatre that is used for lectures and other activities.

Natural light filters gently into the building beneath the vaults, as well as through an assortment of skylights and windows. 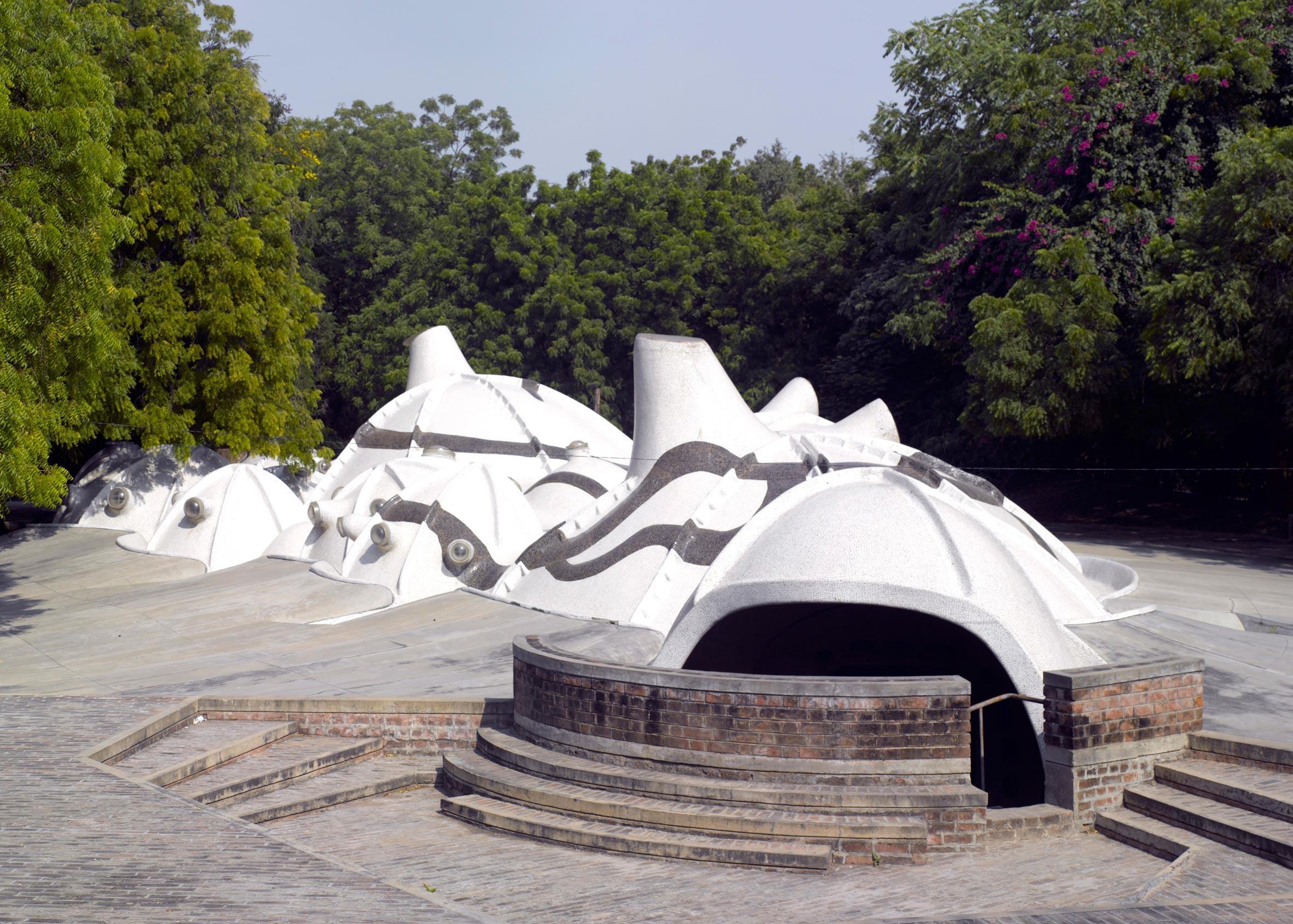 One of of Doshi’s most experimental projects is also located nearby. His Amdavad ni Gufa, built in 1995, is a cave-like art gallery that exhibits the work of artist Maqbool Fida Husain.

Tortoise shells and soap bubbles are cited as the inspirations for the domed structures that form this building. Like at Sangath, this structures are covered in mosaic tiles. 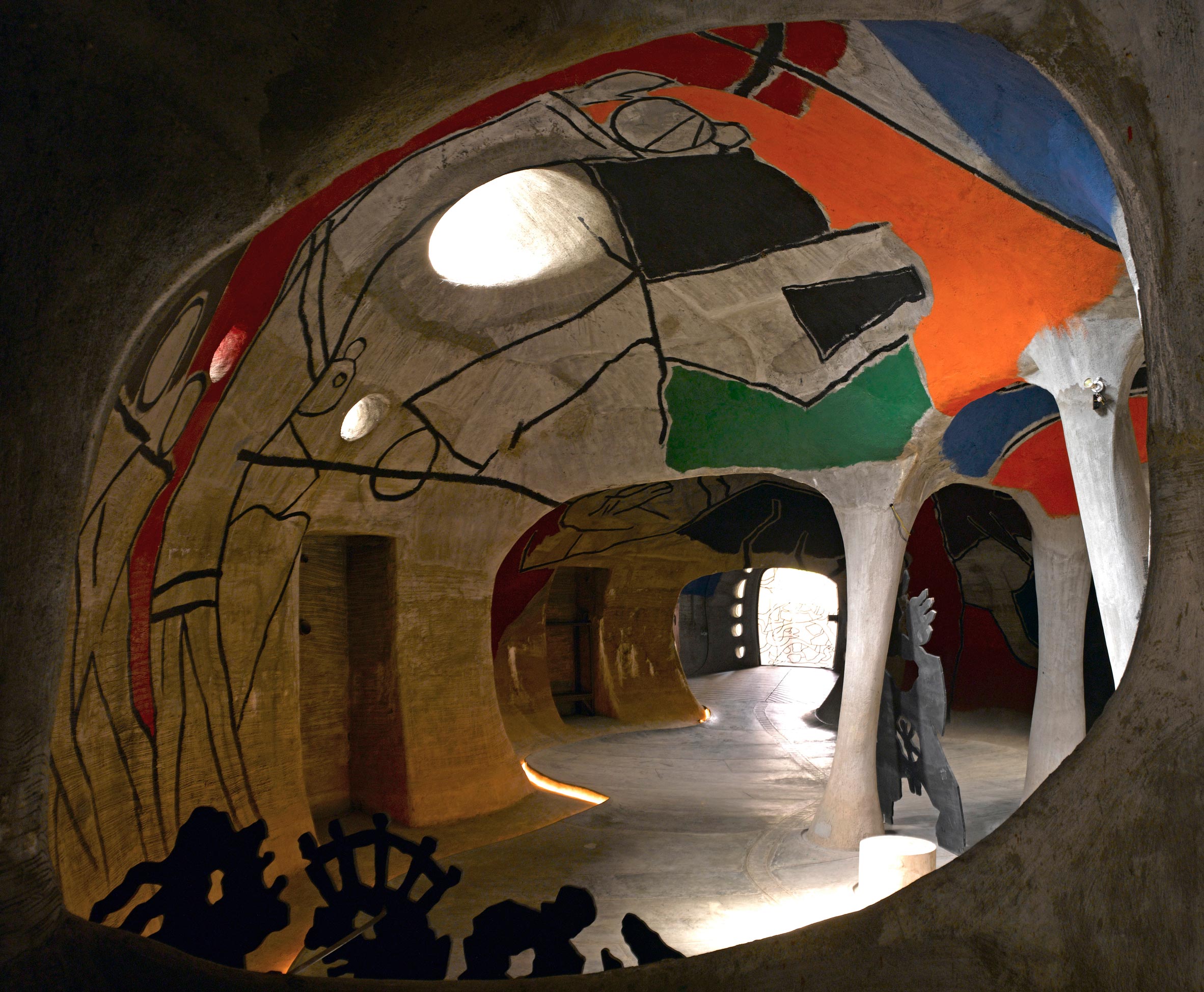 Inside, artworks have been applied directly onto the walls like hieroglyphics, while metal sculptures are propped up against the irregular columns.

Dezeen is media partner for the Royal Academy‘s annual architecture lecture 2017, which coincides both with Doshi’s 90th birthday and the 70th anniversary of Indian independence. 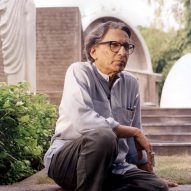 Doshi is the 27th speaker in the prestigious lecture series, which has previously featured architects including Alvaro Siza, Peter Zumthor, Rafael Moneo and most recently Wang Shu.

Dezeen will be live streaming via our Facebook page. Tune in from 6:30pm UK time to watch the talk in full.