Oke Hauser and Corinna Natter of MINI Living and architect David Freeland explain how the micro home they built on a Los Angeles rooftop responds to the city in our latest Dezeen x MINI Living movie.

MINI Living collaborated with local architecture firm FreelandBuck to create the tiny home, which was installed on the roof of a former industrial building in Downtown Los Angeles for LA Design Festival in June 2018.

It is the third iteration of the MINI Living Urban Cabin, following versions in London and New York. For each edition, MINI Living works with a local architecture firm to adapt a 15-square-metre base structure according to its location. 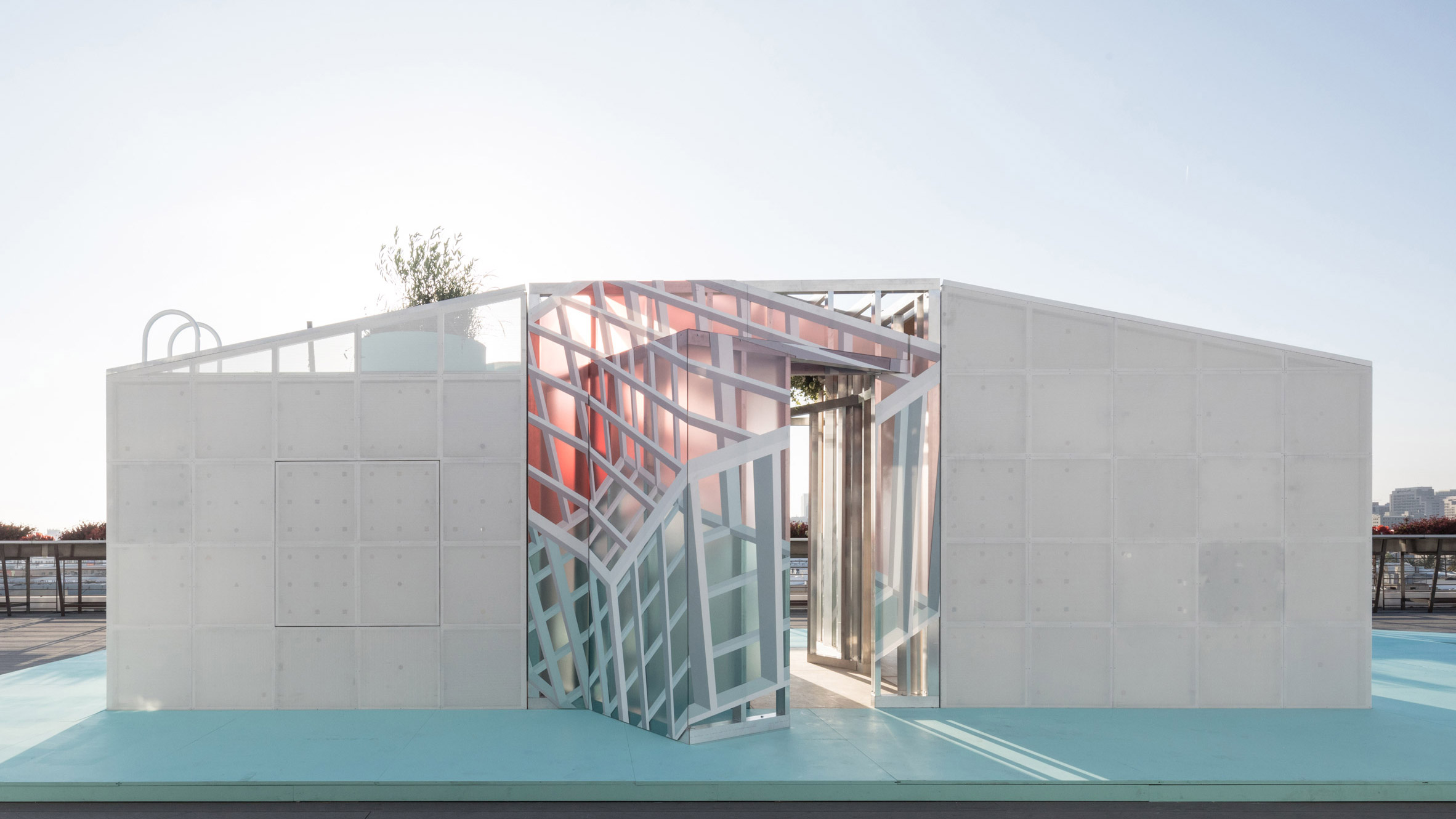 “We were asked to bring a kind of local quality to the cabin,” FreelandBuck principal David Freeland explains in the movie, which Dezeen filmed for MINI Living in Los Angeles.

FreelandBuck’s main contribution was to create a central atrium for the home, which was partially enclosed to take advantage of the LA weather.

“Homes here are very much connected to the outdoors,” Freeland explains. “The climate allows for this indoor, outdoor kind of free flow.” 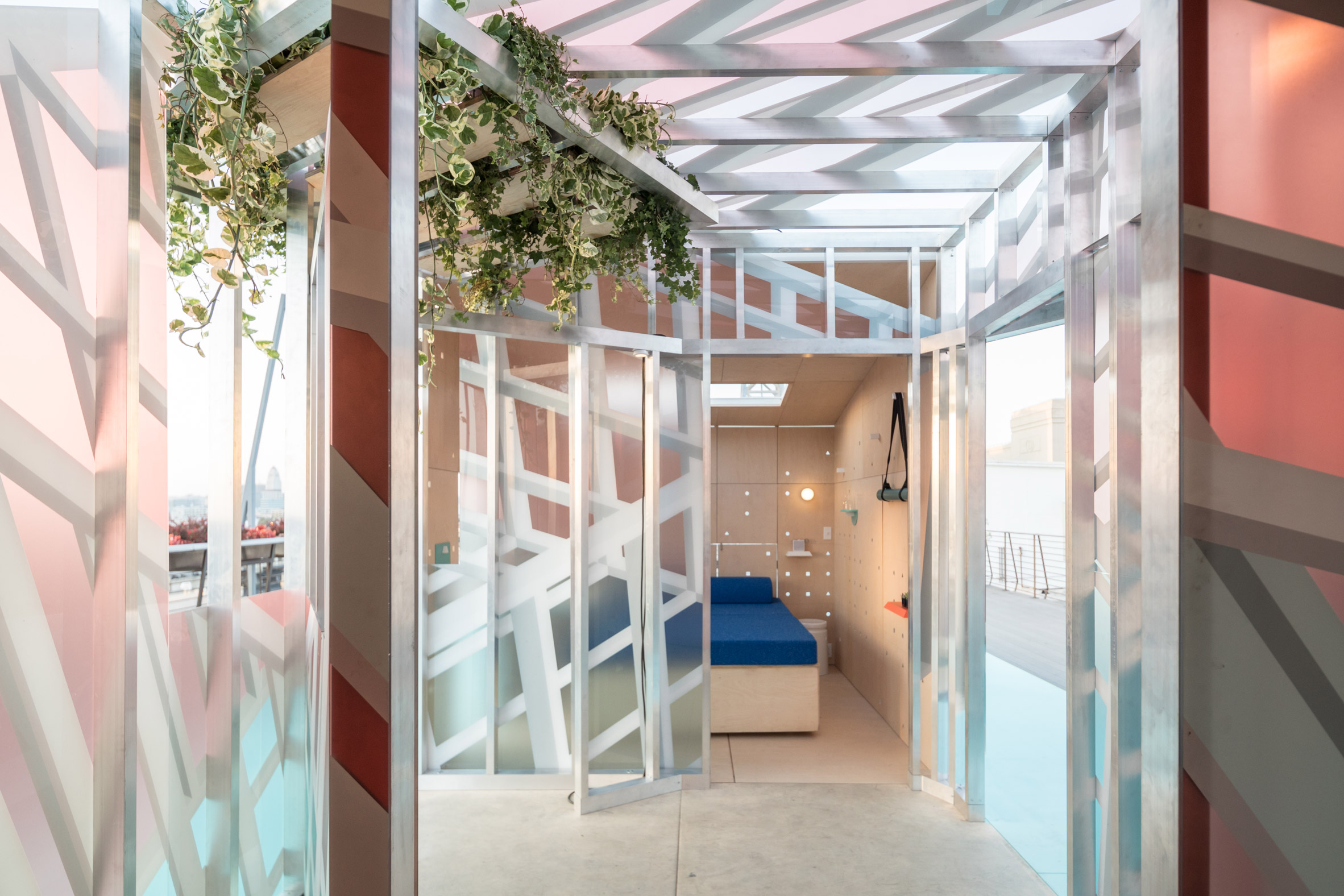 The atrium space, which MINI Living and FreelandBuck describe as an “experience room”, featured an exposed metal frame clad with translucent panels.

Blue and pink trompe-l’oeil graphics based on the frame structure were printed on the outside of the panels, which gave the illusion of a three-dimensional cube when viewed from a certain angle. 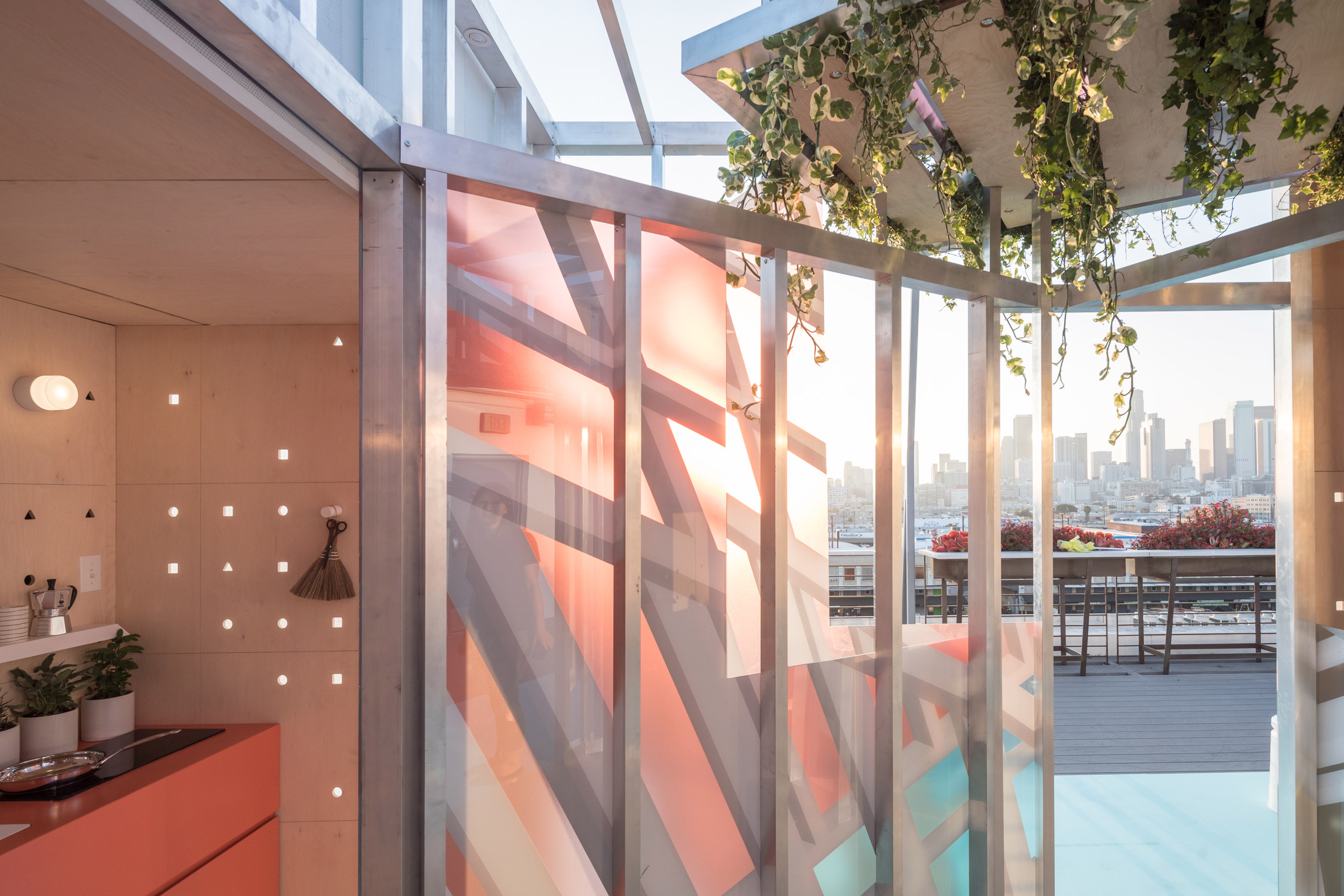 “This is a reference to the dynamic construction landscape of Los Aneles.” Freeland explains.

“Things are constantly being built, so you can see all the framing. And we repeated that language of the frame in the graphics.” 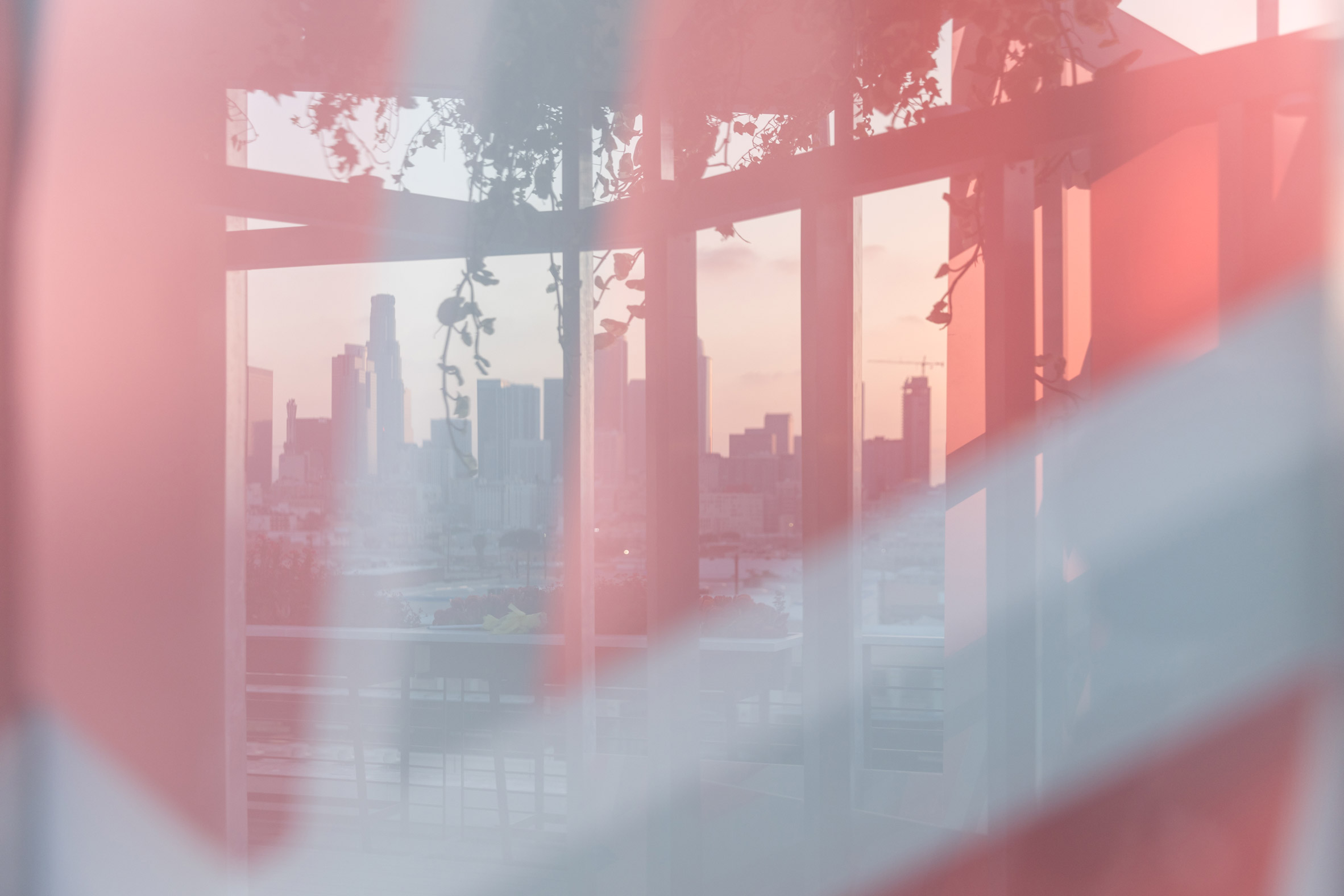 All the other rooms in the home were contained within two volumes either side of the central space.

“We created a kind of archetypal house this time and we split it in two halves” says MINI Living designer Corinna Natter.

“On one side of the cabin there is the bedroom and the living room and on the other side there is the kitchen and the bathroom.” 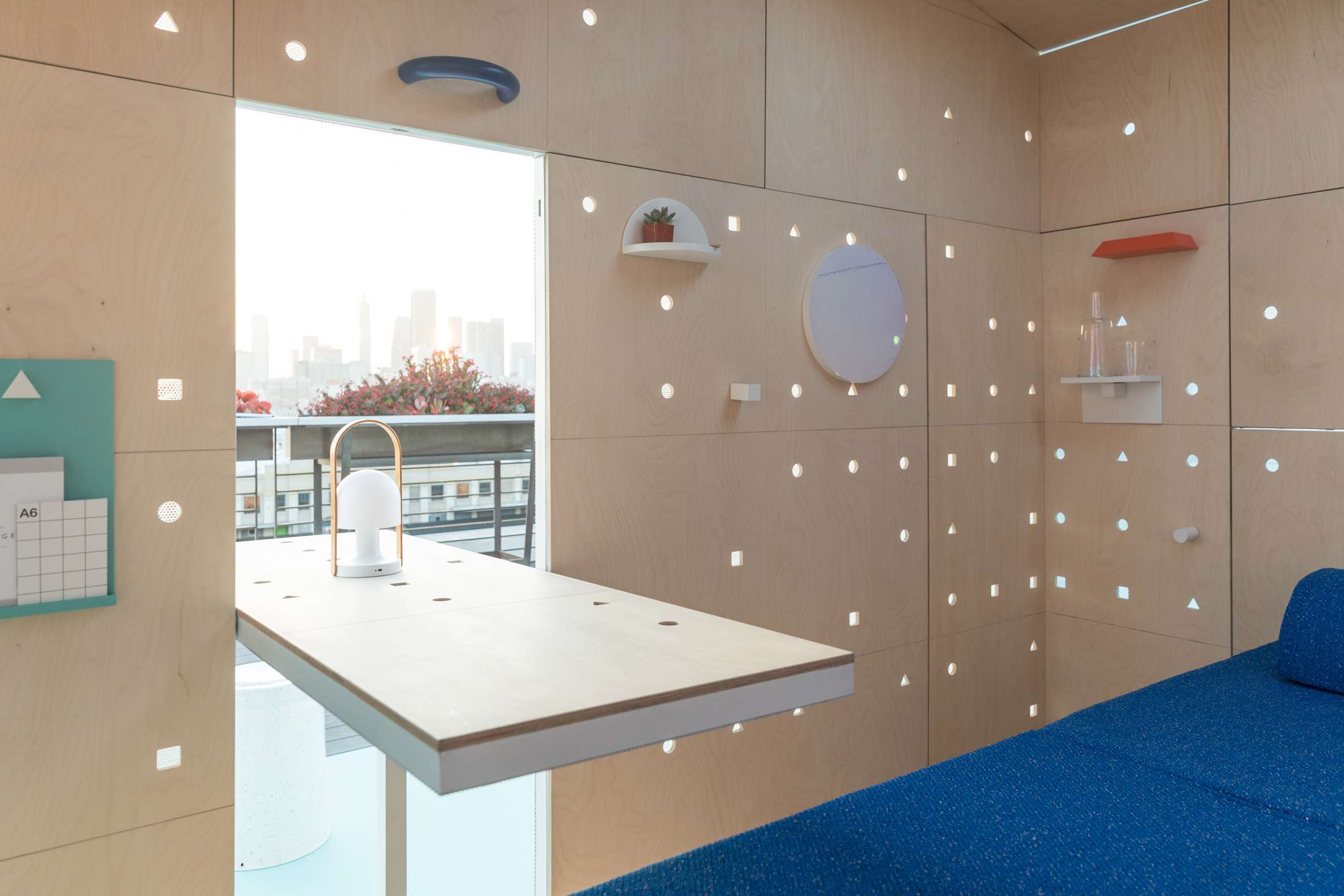 The cabin featured a number of revolving panels and hatches, which could be opened or closed depending on the occupant’s desire for privacy.

A wall panel in the living room could be flipped down to create an outdoor dining table, while a blue double bed on wheels could be rolled outside though a hatch.

“It is always a big topic for us to have these public and private areas,” Natter explains. “We have a bed you can push outside so you can share it with others.” 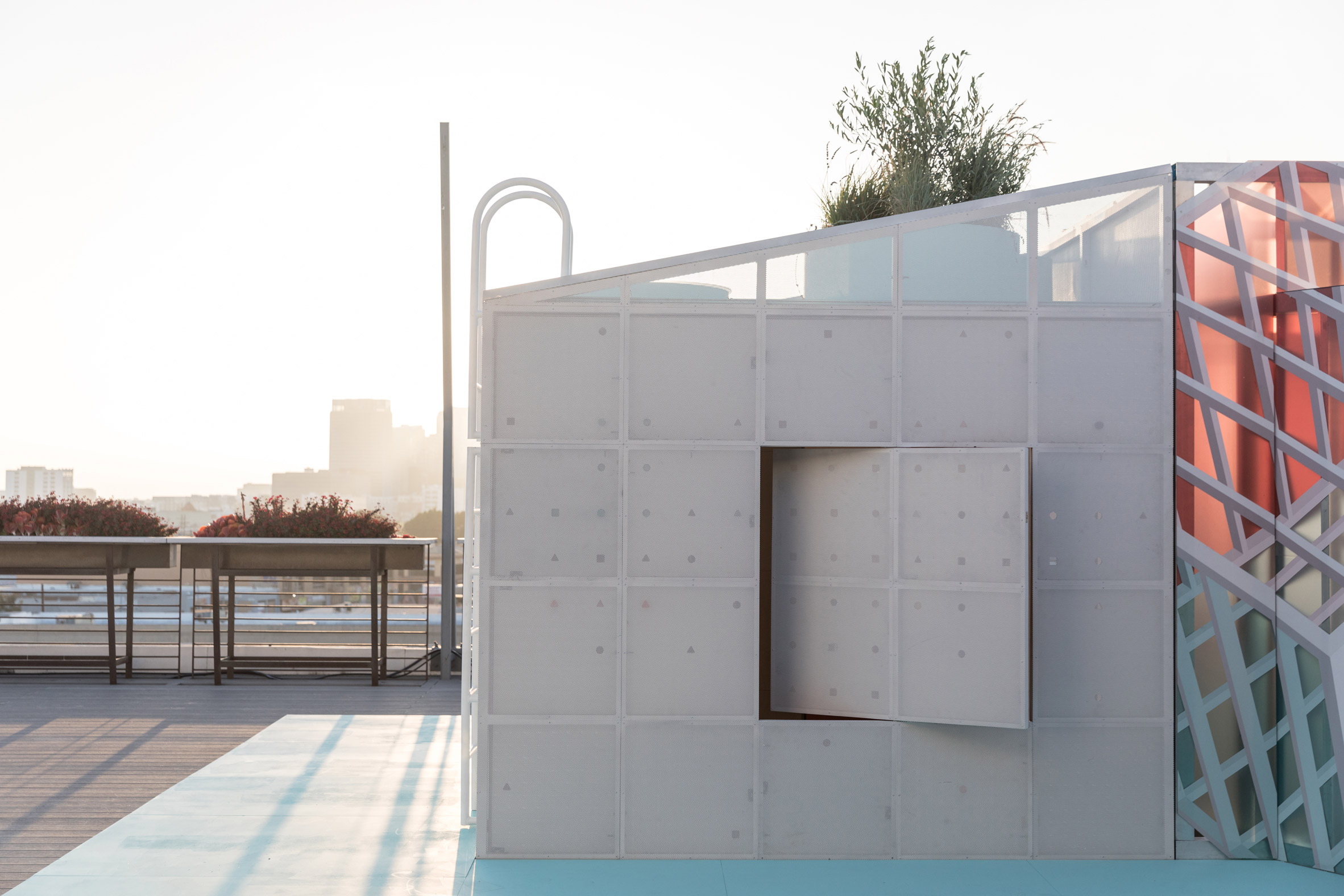 The cabin also featured a small roof garden accessible by a white ladder, styled as if it was for a swimming pool. The central portion of the ladder was mounted on a revolving panel, which could be flipped around to restrict access to the roof if necessary.

“We have a ladder you can turn, so it’s your decision if you want to share [the roof garden] with others or not,” Natter explains.

“You can simply turn it around 180 degrees and use it as a towel rack inside the cabin.” 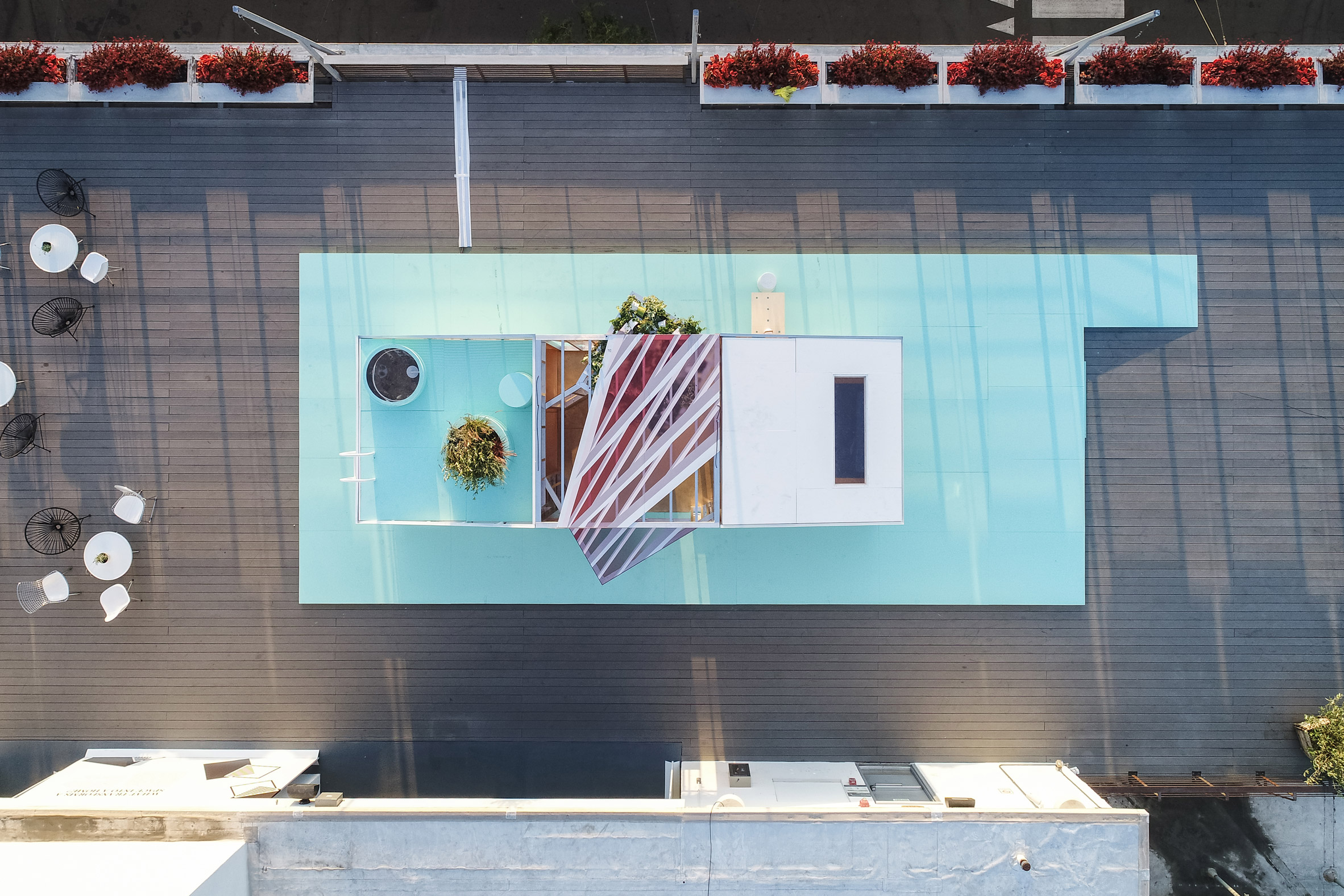 The MINI Living Urban Cabin was open between 7 and 10 June 2018. It follows previous versions of the cabin by London-based architect Sam Jacob and New York studio Bureau V.

MINI Living is planning to continue the series with further cabins in other cities later this year. 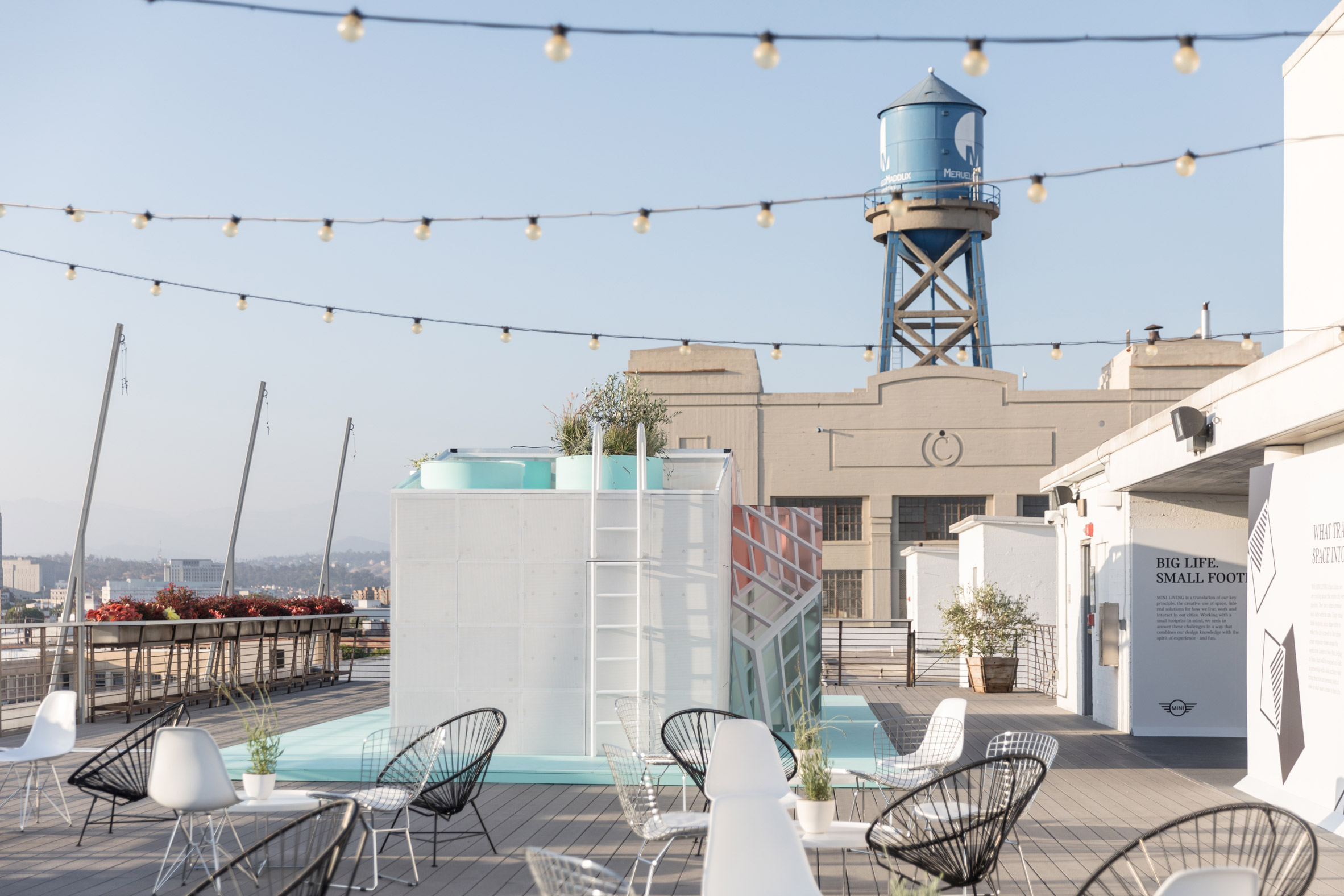 MINI Living creative lead Oke Hauser says the aim of the project is to explore how architecture can be used to make the most of unused spaces in cities.

“The MINI Living Urban Cabin concept is an ongoing series where we think about how to activate spatial potential and turn it into inhabitable places,” he says. 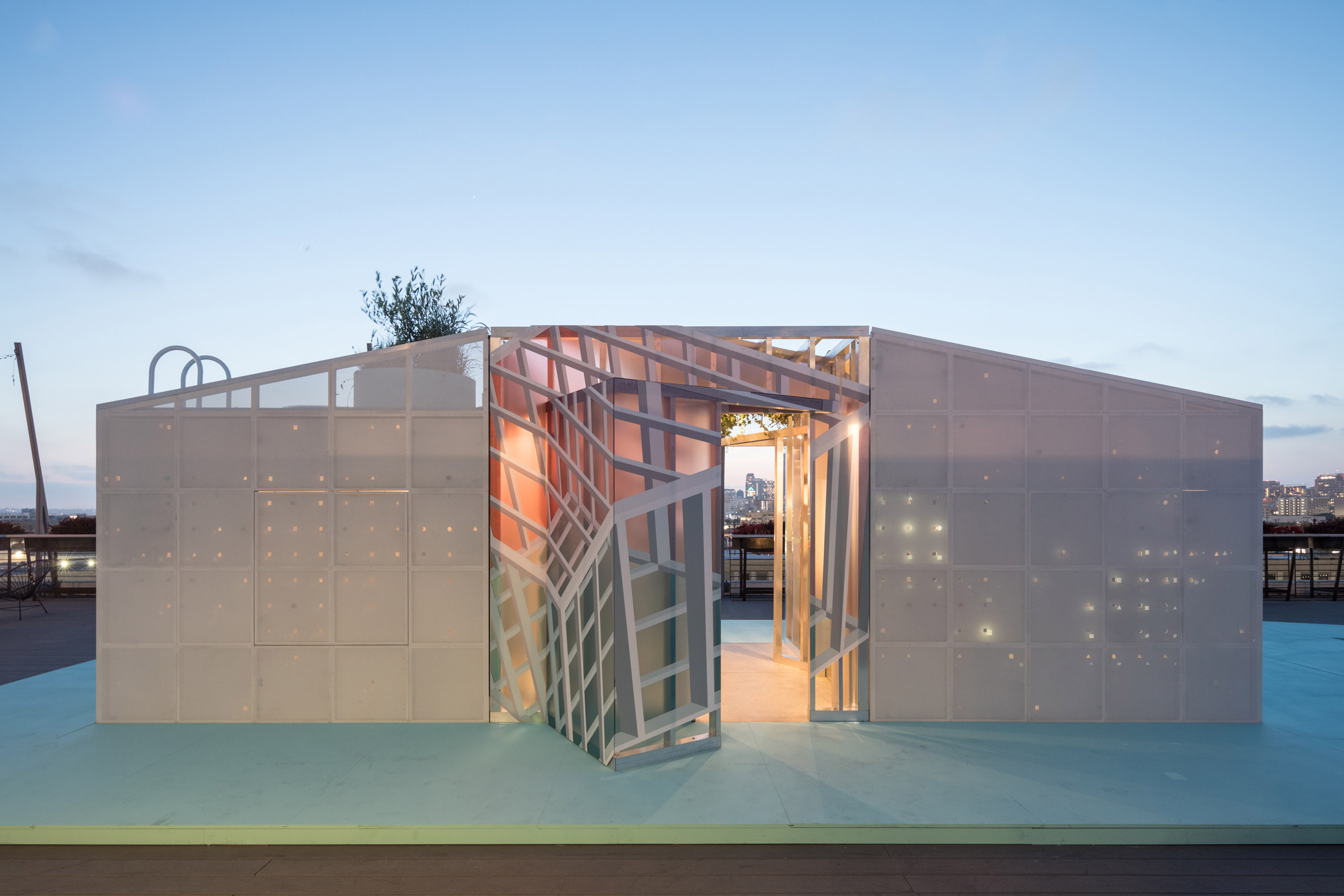 The Urban Cabin programme is part of the wider MINI Living project, which was launched by car company MINI in 2016 to develop architectural solutions for future urban living spaces.

“In 1959, MINI reinvented how we move inside of cities,” Hauser says.

“It was an approach based on three main ideas: the creative use of space, iconic design and, of course, a fun experience. With MINI Living we are translating those ideas to reinvent housing and rethink the way we live inside cities.” 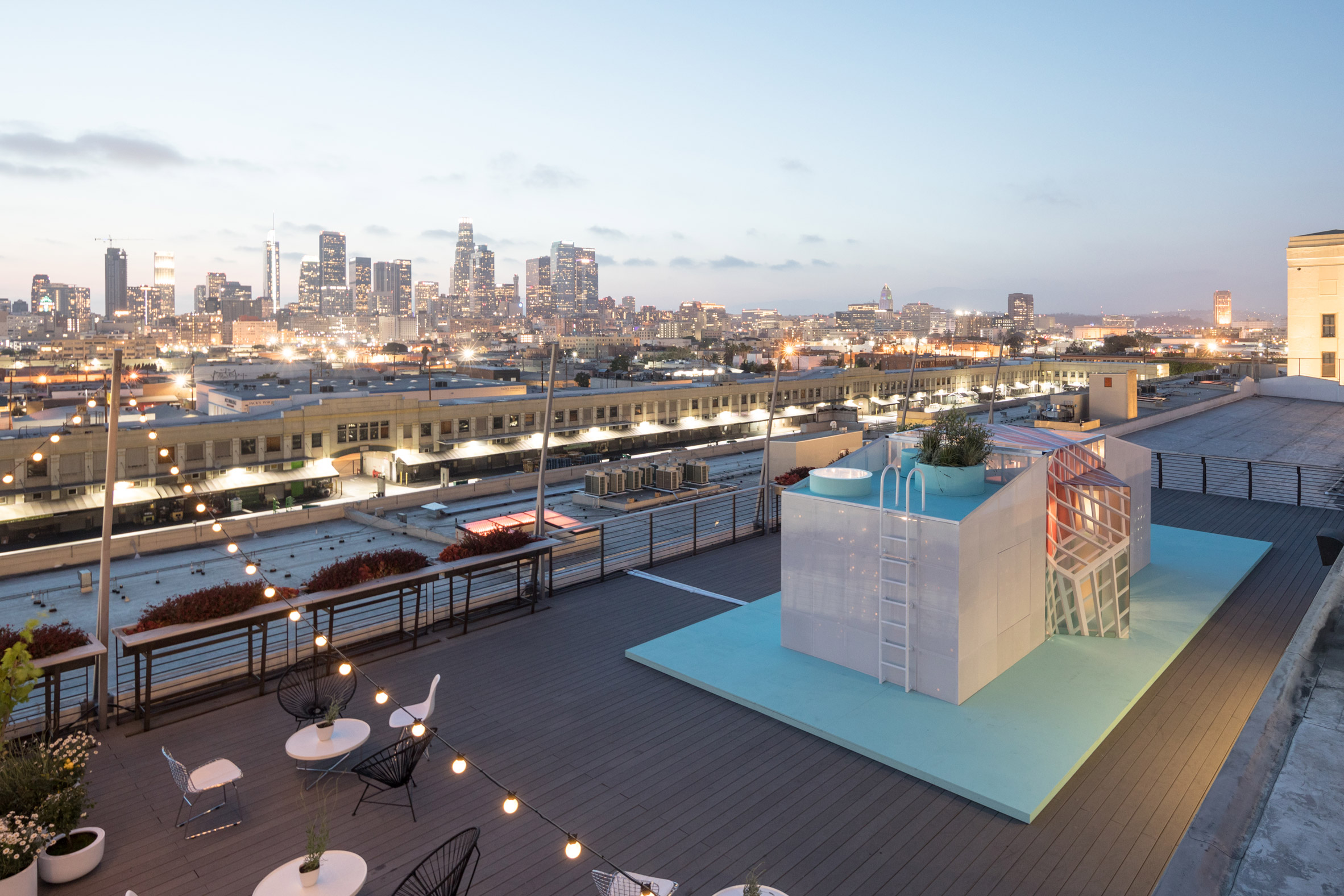 Dezeen is partnering with MINI Living to explore some of the most innovative ideas for housing and cities through the Dezeen x MINI Living series of movies and talks.

As part of the collaboration, Dezeen is running a £10,000 reader competition to design a home for 100 years in the future. Anyone aged 18 or over can enter until 10 September 2018 when the competition closes. The winners will be announced in October 2018.

This movie was filmed by Dezeen in Los Angeles for MINI Living. All photography used in the story is by Laurian Ghinitoiu and courtesy of MINI Living.