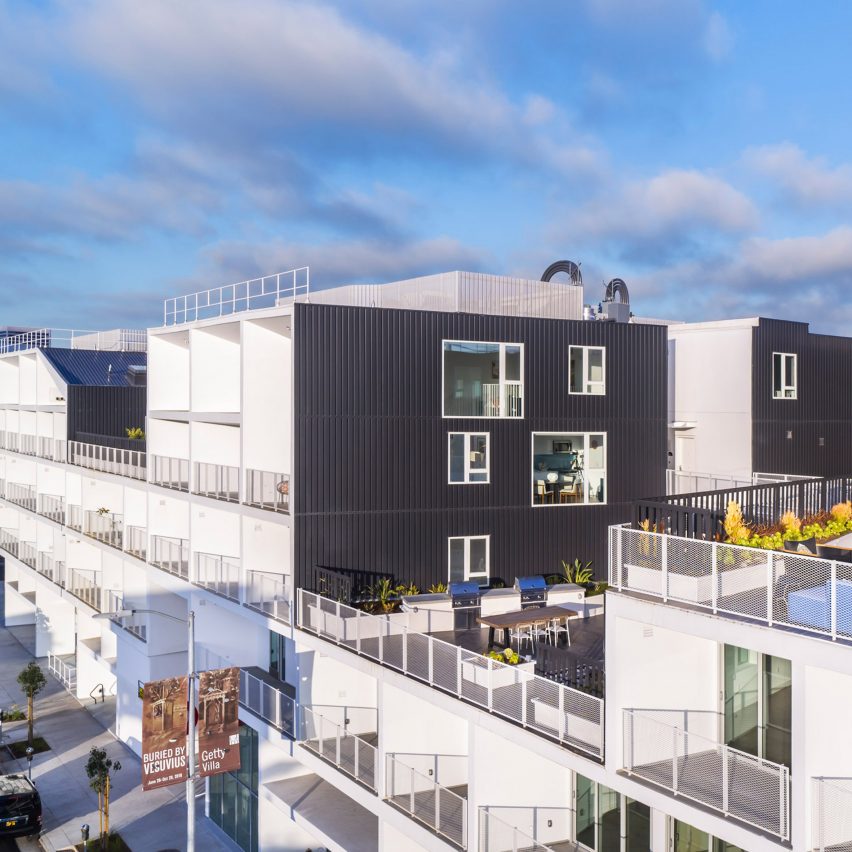 Built on the former site of an auto dealership, the Westgate1515 residential complex sits along Santa Monica Boulevard, a thoroughfare that connects various communities in the LA area.

The development serves as housing for students attending the University of California, Los Angeles (UCLA), which lies about three miles to the northeast. Students can get to the campus by foot, bike, bus or car.

“The project embraces the culture and ecology of its surroundings and provides students the opportunity to engage with the neighbourhood in a more holistic way,” said local firm LOHA, noting that college campuses are often closed off from the city.

For the 335,000-square-foot (31,123-square-metre) project, LOHA sought to break down the scale of a typical apartment block and demonstrate new approaches to multifamily housing in the area, where cars tend to dominate.

“The resulting ‘urban village’ strives to engage the public on a stretch of roadway better known for fast vehicular traffic than a lively pedestrian streetscape,” the team said. “This project aims to change the conversation of what this neighbourhood can be.”

The complex contains 147 residential units, along with 42,000 square feet (3,902 metres) of commercial space. Current tenants include a Target department store and a pet groomer.

The complex consists of multi-storey volumes positioned around open areas. The height of each volume varies, with the tallest rising five levels.

Voids were strategically placed within the development to create pedestrian zones and public space.

Facades consist of white stucco and black, corrugated metal – a colour scheme intended to provide contrast and exaggerate the cuts in the building.

The team carved away portions of exterior walls to form recessed balconies and inset windows. Metal mesh railings with a diamond pattern line the balconies.

“The building’s facade is designed to be porous and inviting, opening up and folding down to the bustle of Santa Monica Boulevard, while remaining private and enclosed along its residential corridors,” the team said.

Units feature basic finishes like white walls and wood or carpet flooring. Shared amenities at the complex include a swimming pool, a fitness centre, a clubhouse and a co-working space.

Others include the wedge-shaped SL11024 complex in Los Angeles, which was created for students and faculty members at UCLA, and a dormitory made of economical materials at the University of California, Santa Barbara.

Photography is by Paul Vu.