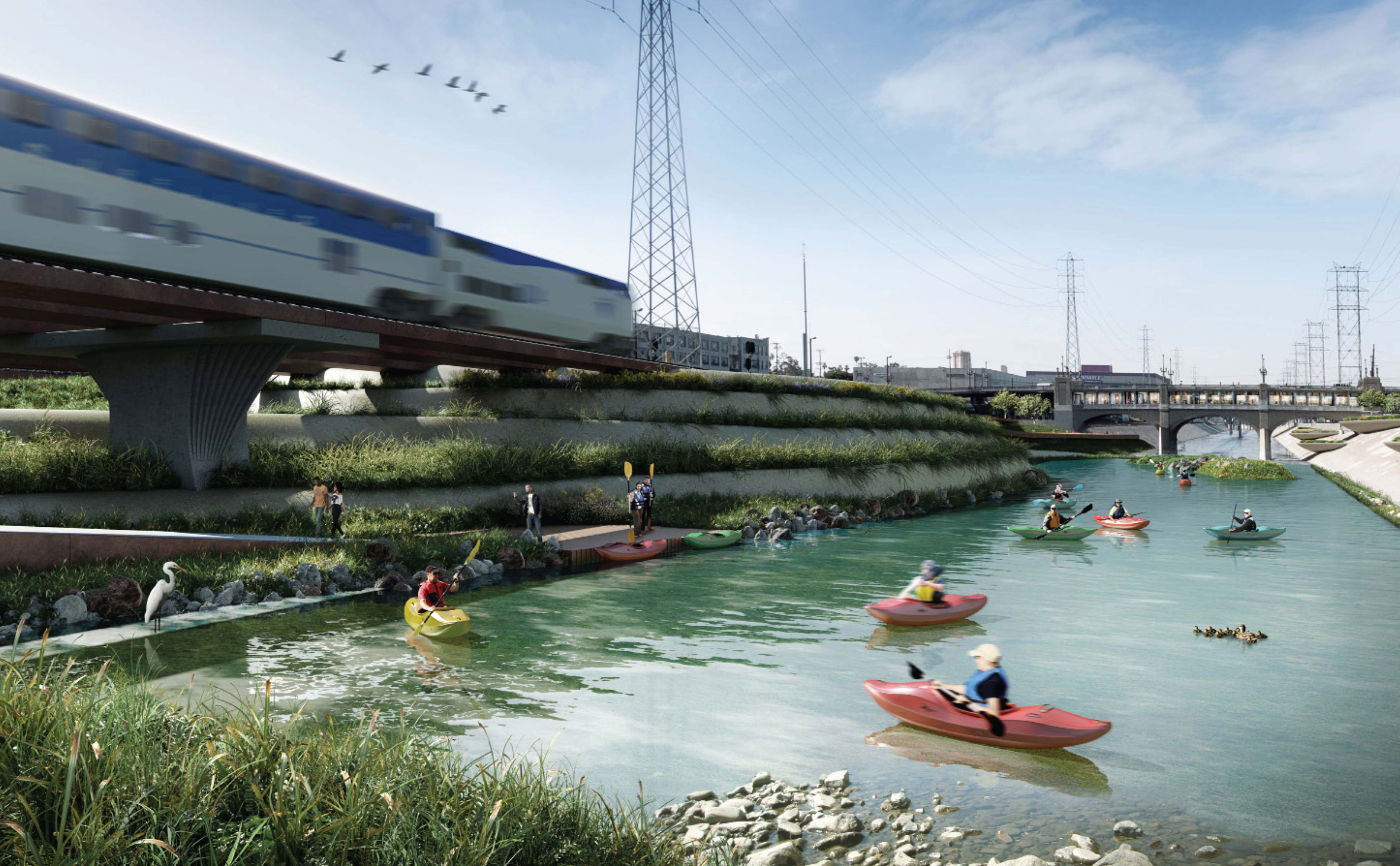 The City of Los Angeles allocated each firm a mile-long stretch of the Downtown area of the waterway to reinvigorate. Participating firms include Gruen Associates, WSP, CH2M, Chee Salette, Mia Lehrer + Associates, AECOM and Tetra Tech.

The architects were tasked with integrating regeneration projects currently underway as well those slated for the future. The proposals focus on improving connectivity and public access to the river.

Local firm Gruen Associates plans to reconfigure a stretch of river between Interstate 110 and the northern border of Chinatown by integrating meadows and elevated public pathways with an existing railway yard. 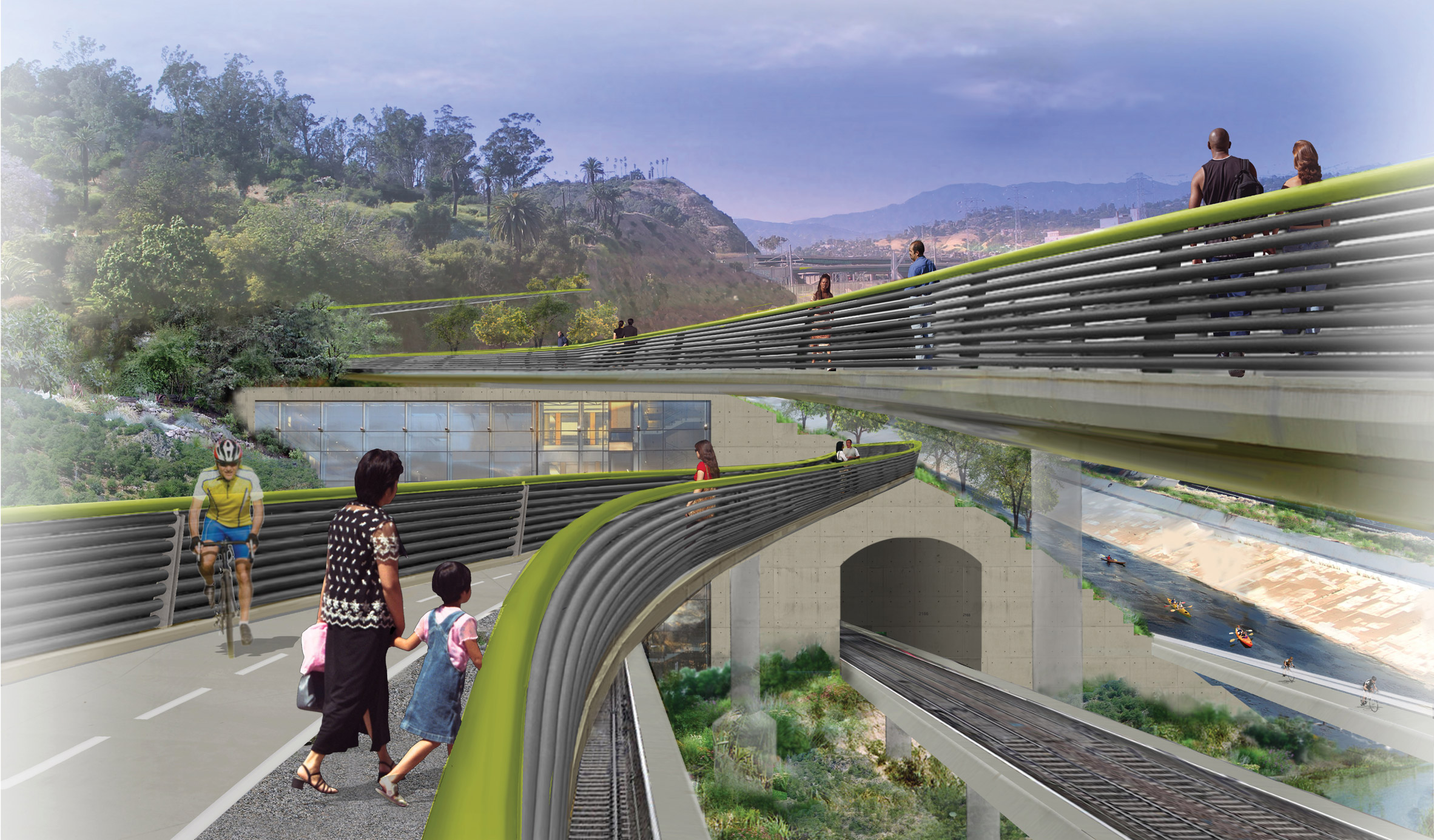 A scheme by WSP flanks the river with a walkway and stepped terraces, widening the waterway in some areas and traversing it with stepping stones in others. Further features include a bridge that will lead visitors from the roadside to a viewpoint that overlooks the river, while adjacent railway tracks will be separated by trees. 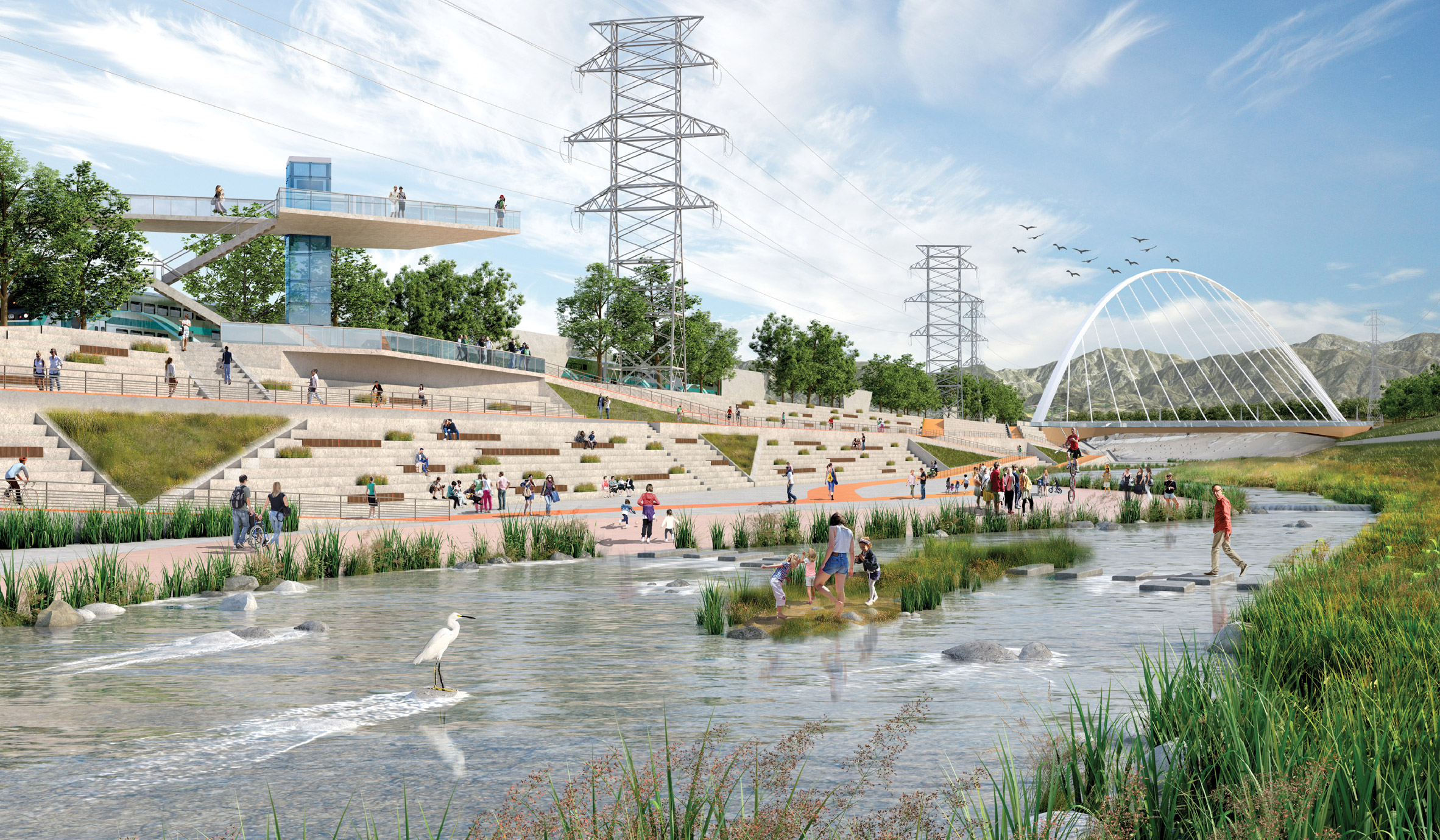 CH2M has reimagined the river as a creek that rises to meet the northern edge of LA’s Arts District, with a new bicycle path running alongside look-out points and cafes. 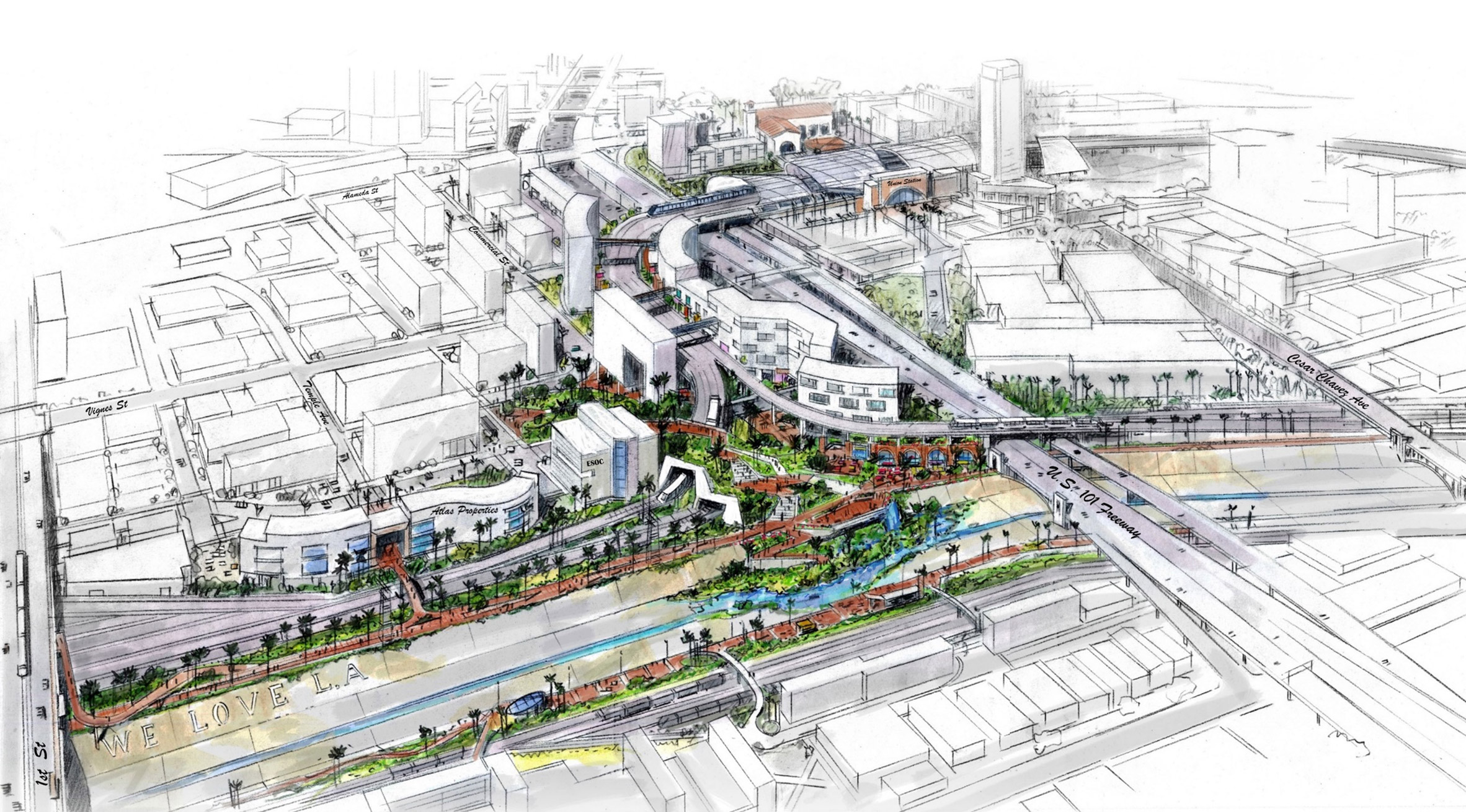 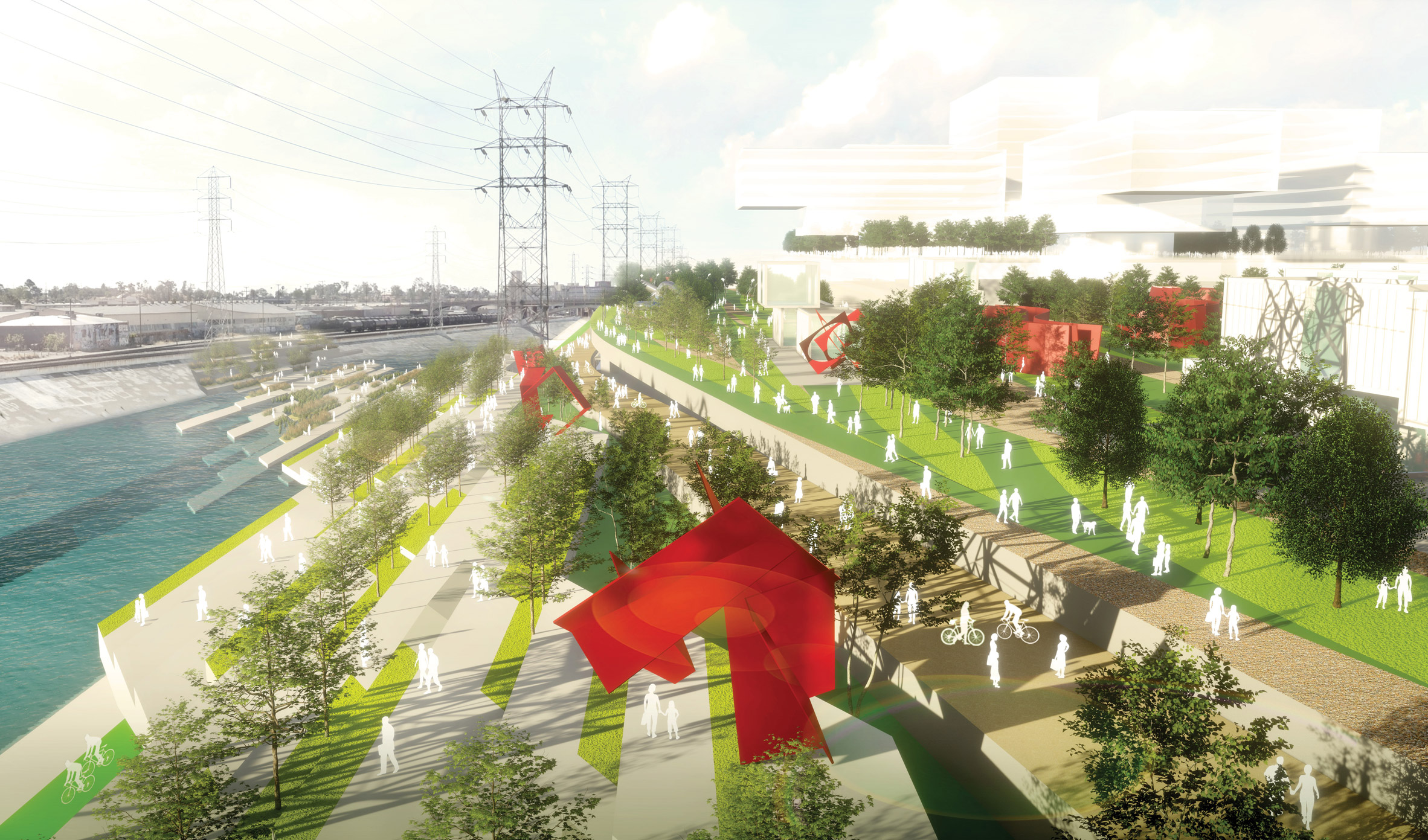 Undulating pathways lead to a launch pad for kayaks in Mia Lehrer + Associates’ section of the river, which will run parallel to BIG’s huge 670 Mesquit complex planned for an industrial site in the Arts District. 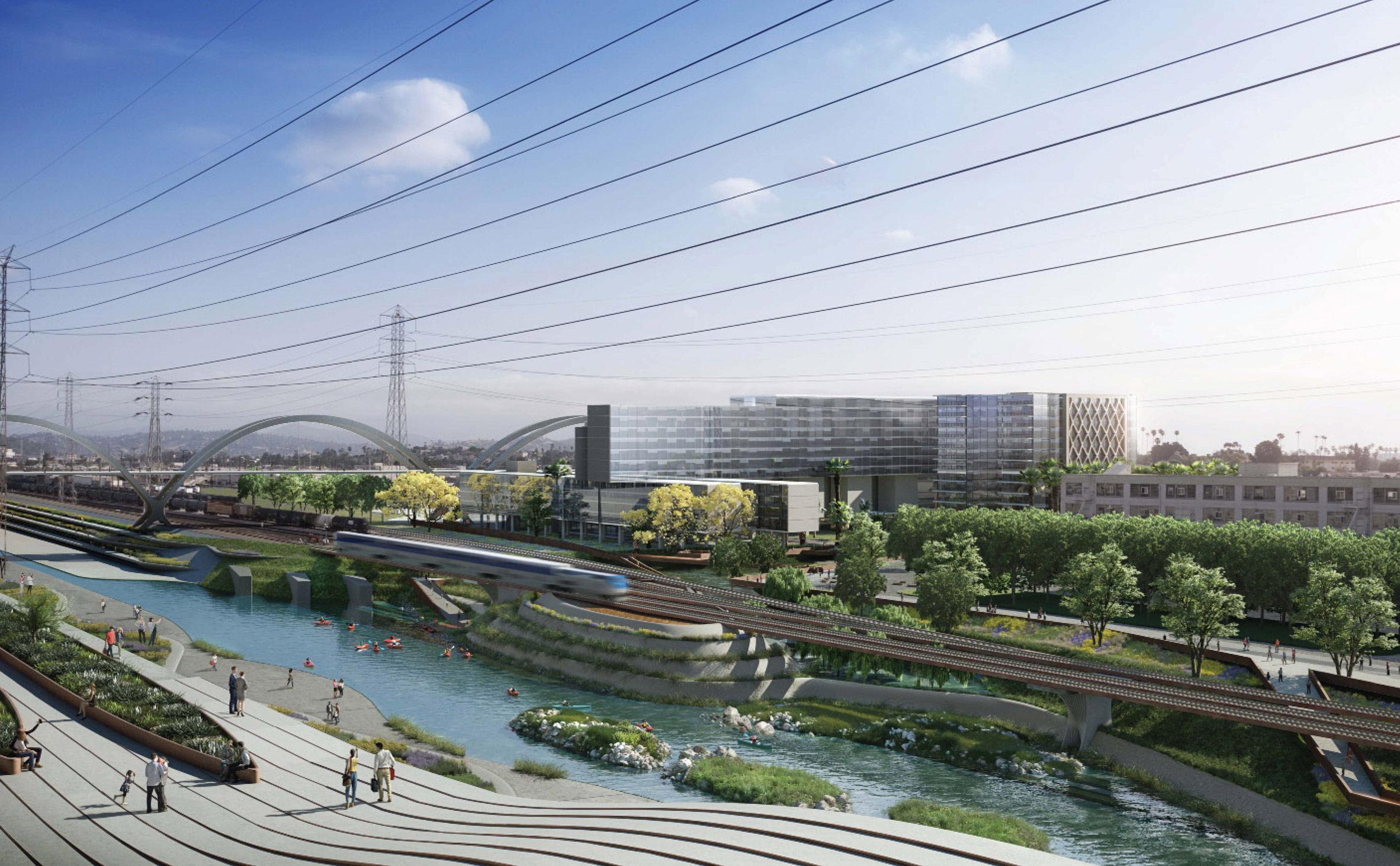 AECOM’s proposal features a network of pedestrian bridges that pass above play facilities including a climbing wall, a basketball court and a bike park, ringed by brightly hued pathways. 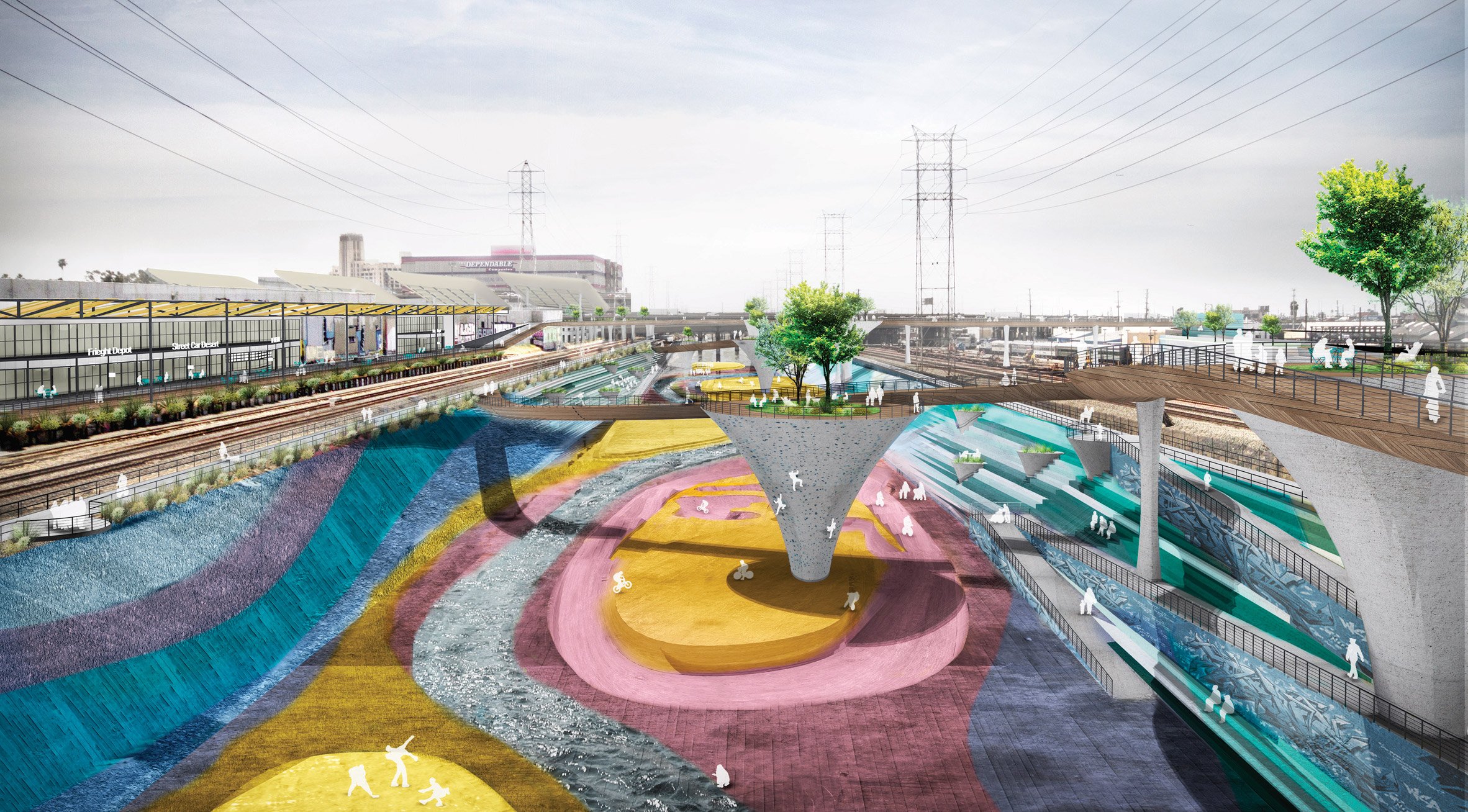 The Tetra Tech scheme envisions a new bridge at East Washington Boulevard over the river, a series of terraced gardens along the western banks of the river and a covered promenade along the eastern banks. 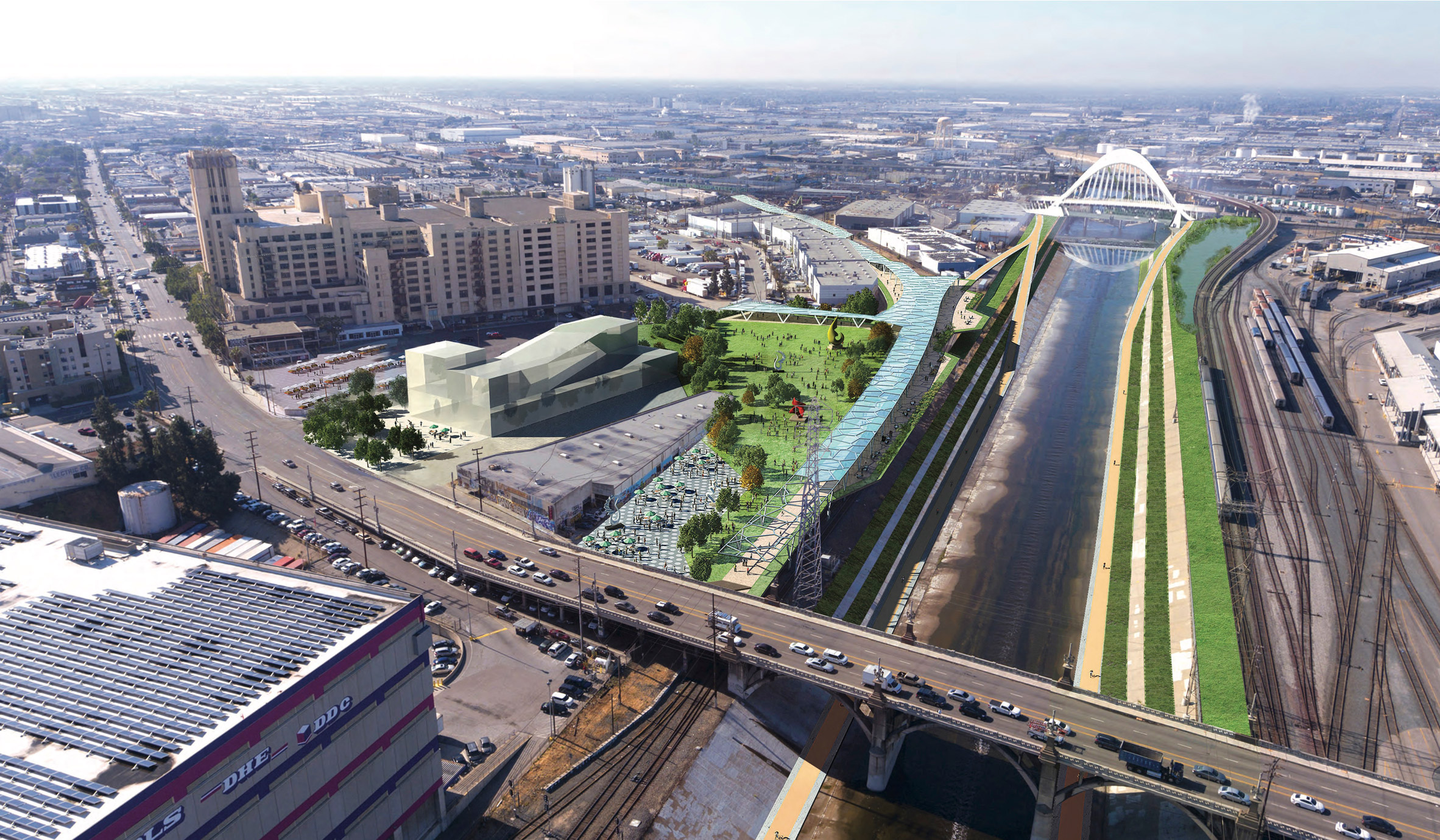 The last stage, designed by engineering firm Tetra Tech, includes a glazed walkway with a restaurant, and a new cycle pathway that meets with the riverside.

Before the urbanisation of Los Angeles, the river fed into a verdant coastal plain. But it was encased in a concrete ditch in 1934 after a series of devastating floods. In recent decades a campaign to revitalise the dry concrete channel has gained momentum, with mayor Eric Garcetti making it a focal point of his administration.

The Los Angeles River Revitalization Master Plan, approved by the city council in 2007, is intended to act as a blueprint for managing the development of the river.

Architect Frank Gehry has since been commissioned to update the masterplan in order to improve the river corridor and make it an “attractive outdoor destination”.

This movie is part of Dezeen x MINI Living Initiative, a year-long collaboration with MINI exploring how architecture and design can contribute to a brighter urban future through a series of videos and talks.

The post Los Angeles River could be revitalised with designs from seven architecture firms appeared first on Dezeen.