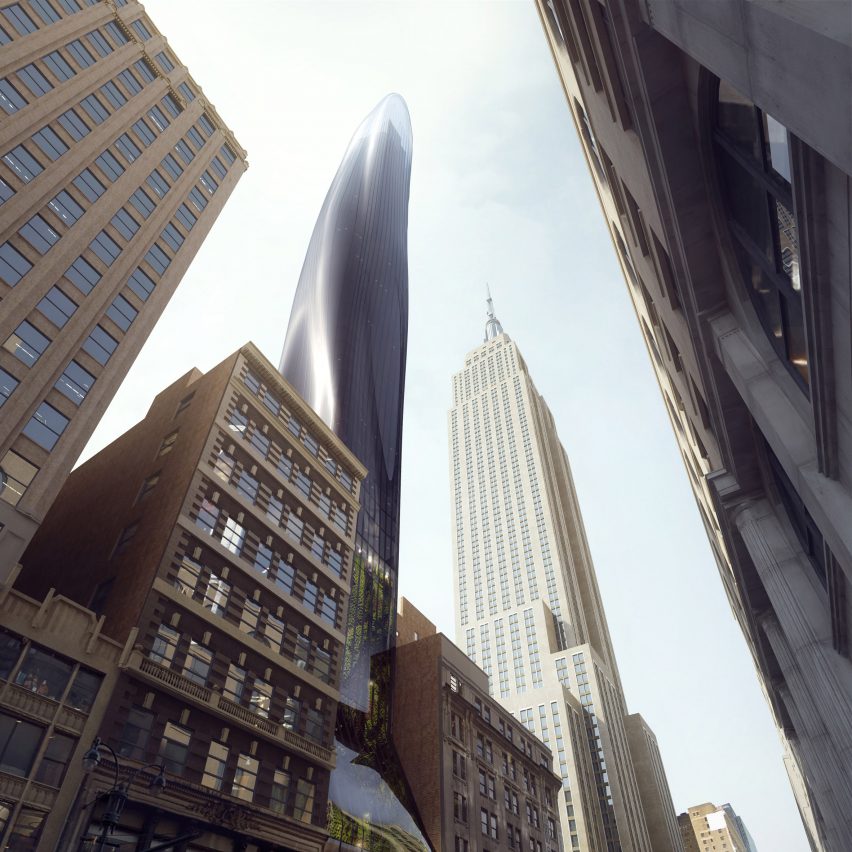 MAD has envisioned a slender, dark skyscraper twisting up beside New York‘s Empire State Building as a contrast to the harshness of the city’s supertall structures.

MAD Architects has imagined the conceptual East 34th to rise among a cluster of existing high-rises in Midtown Manhattan as an “alternative vision” for the city.

The proposal comprises a dark glass skyscraper rising 232 metres tall on a plot next to the Empire State Building, which reaches 381 metres. It features curves, tapers and bends that draw a distinct contrast to the stepped form of its Art Deco neighbour, as well as the other towers rising beside.

“Unlike the pinnacles of conventional towers that typically express very distinct, imposing outlines,” said MAD in a project description, “East 34th expresses a deep-coloured glass curtain-wall facade that slowly fades into a slender and fluid transparent cap, quietly dissolving into the atmosphere.”

“East 34th is planted like a seed, sprouting within the grid, rising with a soft, undulating surface that suggests a more organic, living architecture,” it continued.

MAD, which was founded by Chinese architect Ma Yansong in 2004, released renderings of its East 34th vision today to coincide with the opening of the year-long MAD X exhibition at Centre Pompidou in Paris.

East 34th is among models depicting 10 of the studio’s wildest designs that are completed, under construction or unbuilt, many of which take forms found in nature.

The New York skyscraper’s organic shape for example mirrors the rounded moments of MAD’s Chayong Park Plaza in Beijing, which the firm also designed to juxtapose a skyline dominated by boxy tower blocks.

MAD – which has offices in the city, as well as Beijing, China, Los Angeles and Rome – has envisioned a number of details about the East 34th tower.

It measures 11,148 square metres and is predominantly residential, with shops and public amenities on its lower level.

Inside, these facilities are arranged around a multi-storey atrium featuring a large green wall, designed to offer residents and visitors “a new type of ‘urban nature’ within the vertically dense city”.

New York’s high-rise history dates back to the early 20th century, with structures including the Empire State Building and 30 Rockefeller Plaza.

As the city continues to densify, it has experienced a boom of skyscrapers in recent years, including projects such as Rafael Viñoly’s 432 Park Avenue, SHoP Architects’ 111 West 57th Street and the major development at Hudson Yards.

MAD’s criticism of New York’s skyline chimes in with concerns held by a number of architects.

Elizabeth Diller – whose firm Diller Scofidio + Renfro is working on a number of projects in the city – described them as damaging the city’s fabric in 2016.