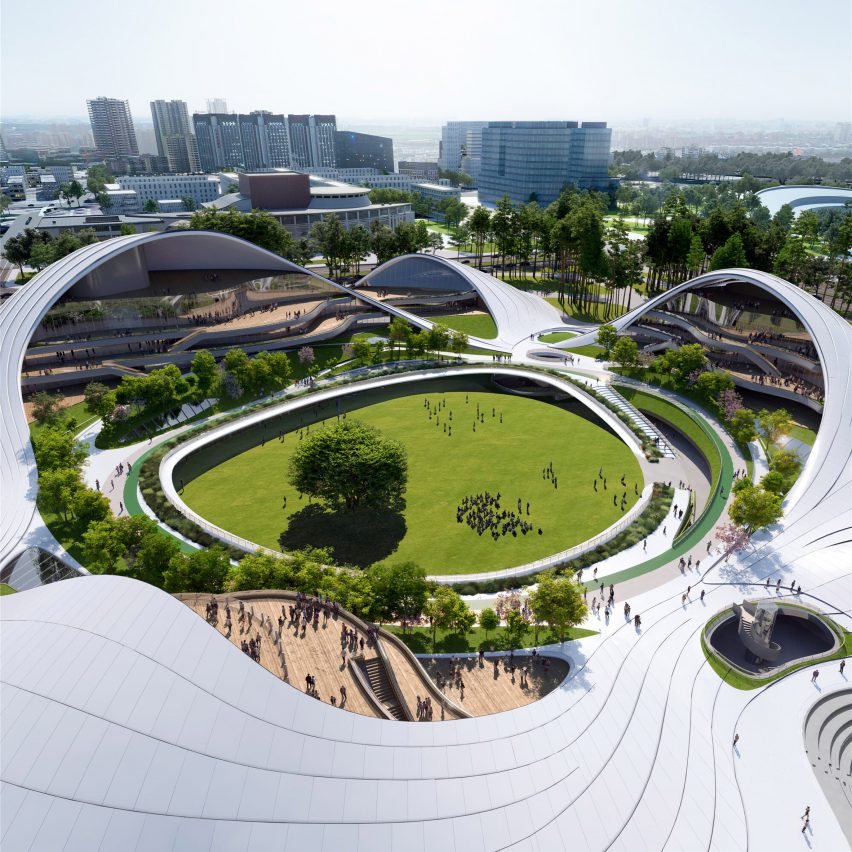 Architecture studio MAD has designed a three-venue civic centre in the city of Jiaxing, China, that will be topped with a continuous roof that has the form of a tarpaulin being blown in the wind according to the studio,

Located near the canals of the historic South Lake and alongside the city’s largest park, the Jiaxing Civic Center will contain three buildings organised around a 6,000-square-metre lawn.

“A civic centre, first and foremost, must be a place that attracts people; a place where children, youth, seniors, and families are willing to come together on a daily and weekly basis,” said MAD founder Ma Yansong.

“We have created an undulating ring to serve as a garden-like living room for the city: an embrace.”

Covered by an undulating, continuous roof the buildings will contain the Science and Technology Museum, the Women and Children Activity Center and the Youth Activity Center

By placing the buildings under a continuous roof, the studio hopes to create a sense of unity and coherence while also enhancing its energy efficiency and avoiding the duplication of spaces.

“The project’s floating roof forms a continuous skyline, like a tarp blown by the wind, bringing a soft sense of wrapping to the form,” the studio explained.

“The organic flow of the lines throughout the project echoes the softness and grace of the ancient canal towns lining the southern banks of the Yangtze River in eastern China.”

On the ground level, the three venues surround a large circular lawn that was designed to be a public park where people can gather, relax and socialise. It can also be used as an events venue.

A canopy roof will shelter entrances to the cultural buildings and their glazed exterior walls that will link the ground level with the central lawn.

This canopy roof around the lawn also forms a large landscaped terrace that circles the public green space.

The terrace extends and wraps around the perimeter of the cultural buildings forming a 350-metre-long raised walkway that leads to a sunken plaza and amphitheatre-style seating.

Floor-to-ceiling glazed walls will visually connect the interior of the cultural buildings with the exterior while a series of cascading terraces within the curved roof will form a collection of indoor-outdoor spaces.

Beijing-based architecture studio MAD was established by Yansong in 2004. The studio recently revealed its designs for the nearby Train Station in the Forest, which is nestled within a small forest.

It also recently completed a library in China that was cast in seamless concrete and a kindergarten in Beijing topped with red rooftop playground.

The post MAD tops Jiaxing Civic Center with roof shaped like a "tarp blown by the wind" appeared first on Dezeen.