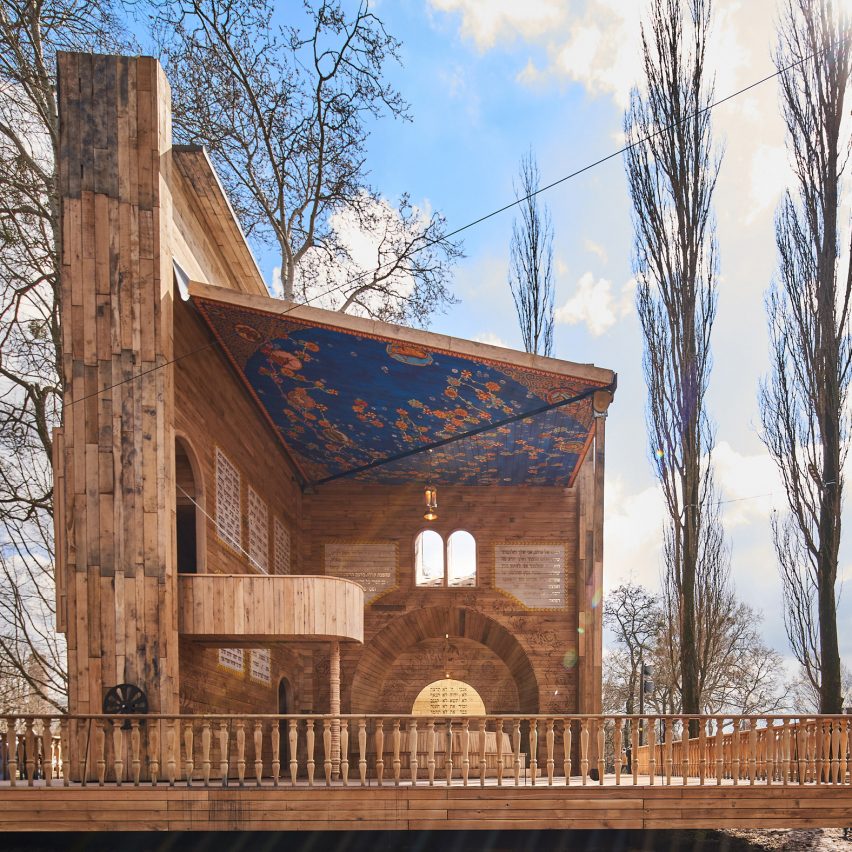 Swiss studio Manuel Herz Architects has created a pop-up synagogue at Babyn Yar in Ukraine to mark the 80th anniversary of a massacre that took place during the Holocaust.

Named the Babyn Yar Synagogue, the place of worship consists of two large walls that can be manually opened and closed like a pop-up book.

The synagogue was built near Kyiv at the site of the Babyn Yar massacre, where around 34,000 Jews from the city were killed by the Nazi party over two days in 1941 – one of the largest mass killings during the Holocaust.

Manuel Herz Architects founder Manuel Herz designed the building to mark the 80th anniversary of the massacre. However, he did not want to create a sombre memorial.

“One might think that the appropriate response to this almost unbelievably inhumane massacre should be an architecture that is sombre, minimalist, and monumental,” Herz told Dezeen.

“The architectural history of holocaust memorials is full of these. But I wanted to approach the project in a very different way.”

Instead of creating a monumental building, Herz designed a structure that has movement and was informed by both historic wooden churches in Ukraine and pop-up books.

“I strongly believe that a monumental, and static approach would be wrong,” said Herz. “We will never match the monumental suffering of the massacre, through monumental architecture.”

“The conclusive, definitive and absolute message that a monumental and static building would suggest, stands at odds with the tens of thousands of distinctive voices that perished in Babyn Yar,” he continued.

“Hence, the idea was borne to design an architecture that has a performative and transformative quality, that creates a new collective ritual, that is commemorative, just as it also creates a feeling of wonder and awe.”

The building consists of a pair of 11-metre-high and eight-metre wide walls that were constructed from steel and clad in oak.

One of the walls is set on a track so that it can be moved using a manual winch. When unfolded the two walls are positioned together, but when unfolded a three-dimensional synagogue is created with a roof that pops up and a balcony and seating that folds down.

“I believe no one can resist the temptation of opening up a pop-up book and seeing how a new world unfolds,” said Herz.

“We can get lost in this new world, which is exactly what happens, when we come together, to pray in a synagogue – we open a book together,” he continued.

“A world of stories, of histories, of morals, and of wisdom. The pop-up book, when transformed into a building, with its transformative quality, and the collective ritual of opening and closing it, seemed to be the perfect leitmotiv for the Babyn Yar Synagogue.”

The synagogue stands on a wooden platform and has walls decorated with prayers and blessings.

Its ceiling is painted with the star constellation that would have been visible over Kyiv, on the date of the massacre in 1941 along with symbols and iconography referencing interiors of the historic synagogues of Ukraine from the 17th and 18th century.

Led by Herz, Manuel Herz Architects is an architecture studio that has offices in Switzerland and Germany. It has previously completed a housing block in Zurich with dynamic facades that transform into balconies and is building a hospital in Senegal.