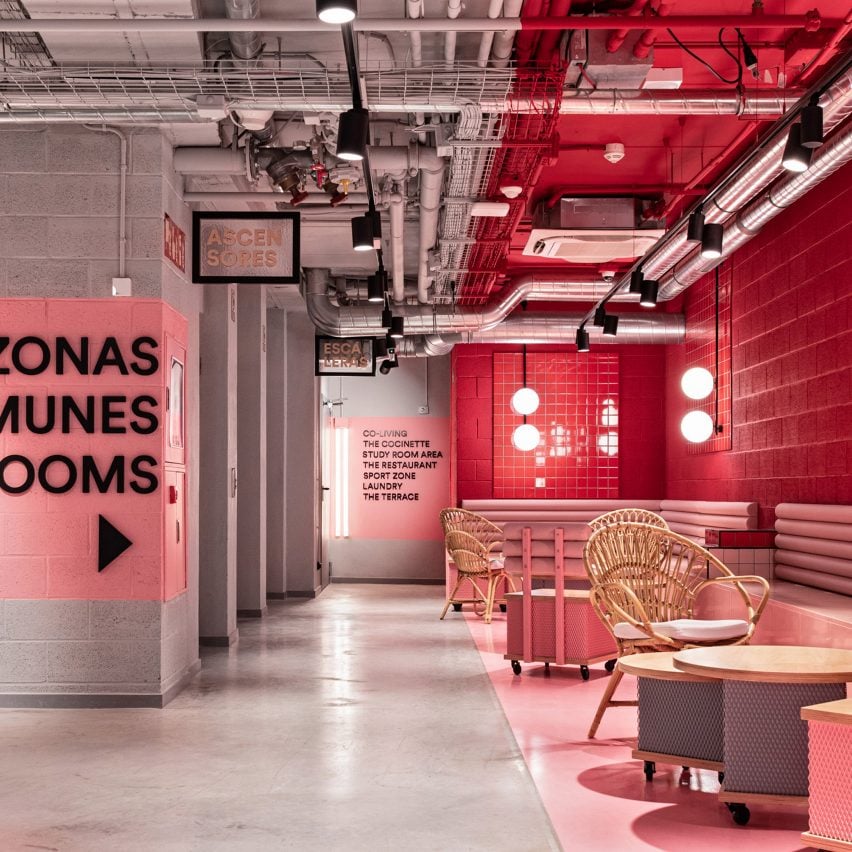 Valencia-based creative studio Masquespacio has completed an open-plan colour-blocked interior with a community feeling for the Resa San Mamés student accommodation in Spain.

The interior design for the Bilbao student residence was commissioned by student accommodation company Resa with the aim of letting its occupants “share experiences as a community”.

Masquespacio created an open-plan design for the 1,850 square-metre building, which has studios for 351 residents and provides spaces for studying, socialising, meeting and dining.

“The client highlighted that they wanted to create a community and strong connection point between the residents of the new Resa,” Masquespacio co-founder and marketing director Christophe Penasse told Dezeen.

The bold and colourful interior used vibrant greens paired with millennial pinks, lavender and hot pinks, while soft furnishings and partitions were used to define zones within the space.

“Using the technique of colour blocking we obtained a strong visual impact for the space and at the same time we could create a clear distinction between each zone in this open space,” explained the studio.

As well as accommodation, the building has a kitchen, a dining room, study rooms, leisure rooms, a gym and a terrace.

Muted yellow covers the ceiling above the open kitchen, while lavender tiles are used as a backsplash.

Wooden furniture with yellow accents surrounds the kitchen area, some of which is on wheels to allow users to reconfigure the space as they wish.

Millennial pink dining tables and chairs were placed against a green backdrop to define the dining space, which also features oversized steps that form amphitheatre-style seating to encourage group interaction.

“We liked the idea of working with an open space and making a space specially focused on university students,” Penasse explained.

“Offering them a lot of options to make their day at the residence a little bit more attractive, and at the same time help them to be more creative.”

The study areas of the residency employ acoustic glass walls to provide silence, but can be opened up to connect the study space with an adjacent lounge.

Walls and services pipes were left unrendered and exposed to give the interior an industrial look.

The studio explained that it envisioned the design for the Resa San Mamés as a free-flowing space that encourages the students themselves to determine how it is used.

“A space where you don’t need to be in the study room to read a book, but just can sit into the launch area,” Penasse said. “A space where people share ideas, experiences and connect together.”

The colour-blocking theme was continued through to the outdoor terrace, where green picnic tables sit within a green-zoned area while different shades of blue signal other areas of seating.

Masquespacio was founded in 2010 by Ana Milena Hernandez Palacios and Christophe Penasse who combined their disciplines in interior design and marketing to create a design agency that works across media, design, fashion and lifestyle.

Dezeen has previously featured the studio’s colourful design for this co-working space in Valencia and also this colour-clashing interior for a phone-repair shop.

Photography is by Masquespacio.