Canadian firms ACDF Architecture and Architecture49 have created a shiny hotel and entertainment complex for an irregularly shaped property that borders BC Place Stadium in Vancouver. 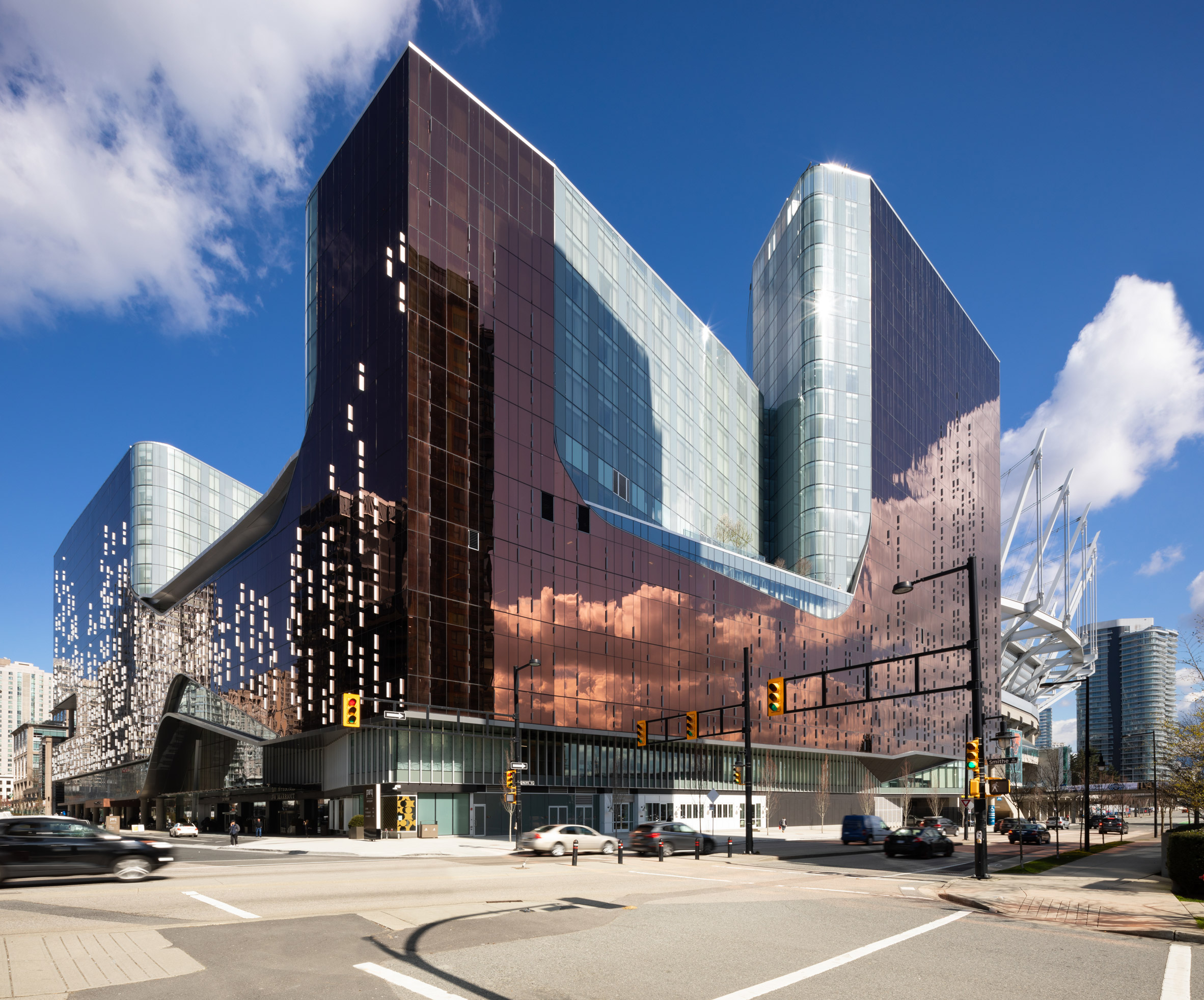 Encompassing 800,000 square feet (74,322 square metres), the Parq complex contains two hotels, eight restaurants, a casino, a large event space, and a fitness centre and spa. The project was designed by Quebec-based ACDF Architecture, and Architecture 49, which has multiple offices in Canada. The two studios also collaborated with IBI Group, a multidisciplinary firm with locations across the globe. 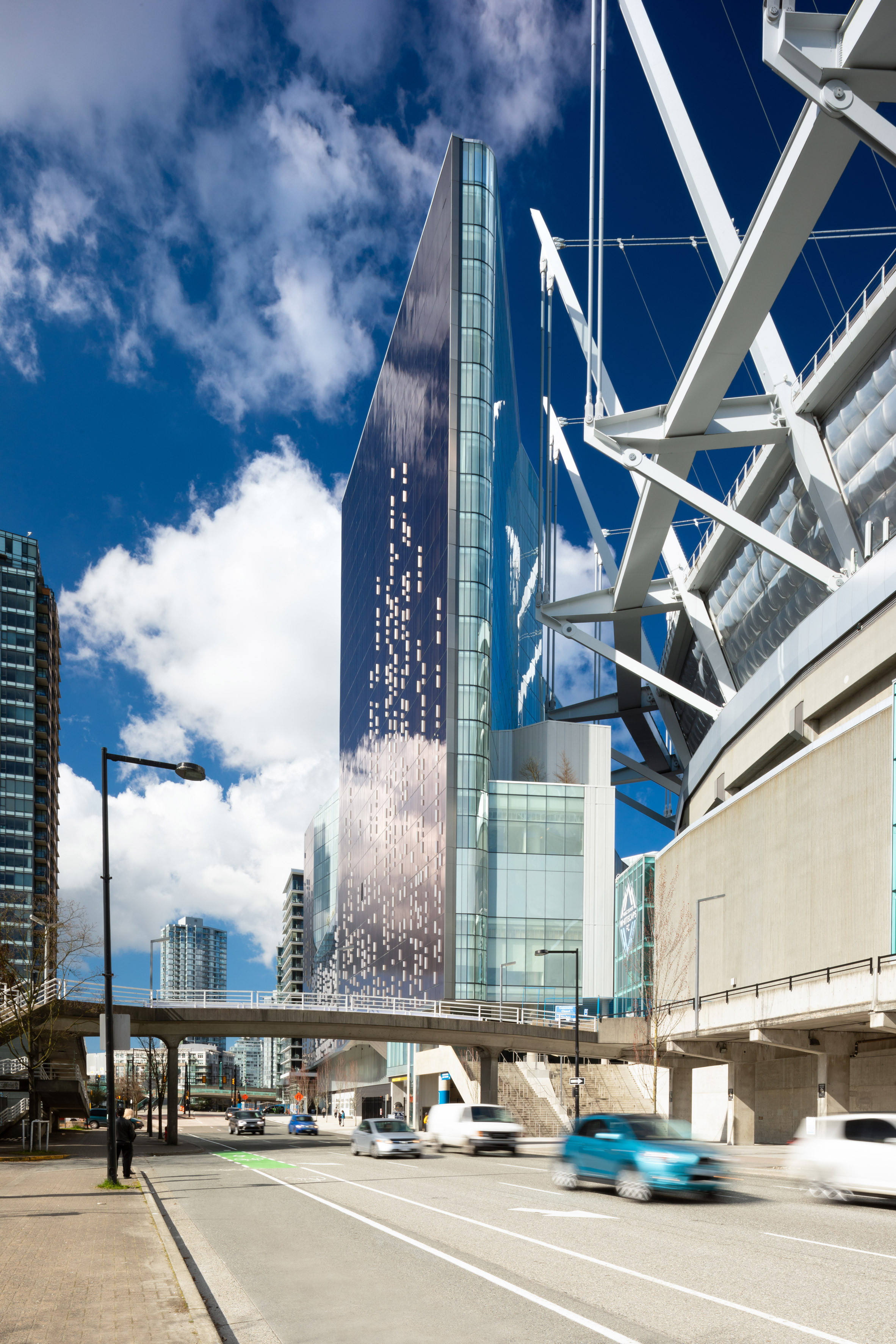 The complex is located between the trendy neighbourhoods of Yaletown and Gastown. It occupies an irregularly shaped lot that wraps the southwestern side of BC Place Stadium, the city’s primary venue for sporting events and concerts.

The arena, which opened in 1983, is home to the BC Lions football team and Vancouver Whitecaps FC soccer team. It also served as the main stadium for the 2010 Winter Olympics. The Parq team aimed to create a multipurpose facility that responded to its context. 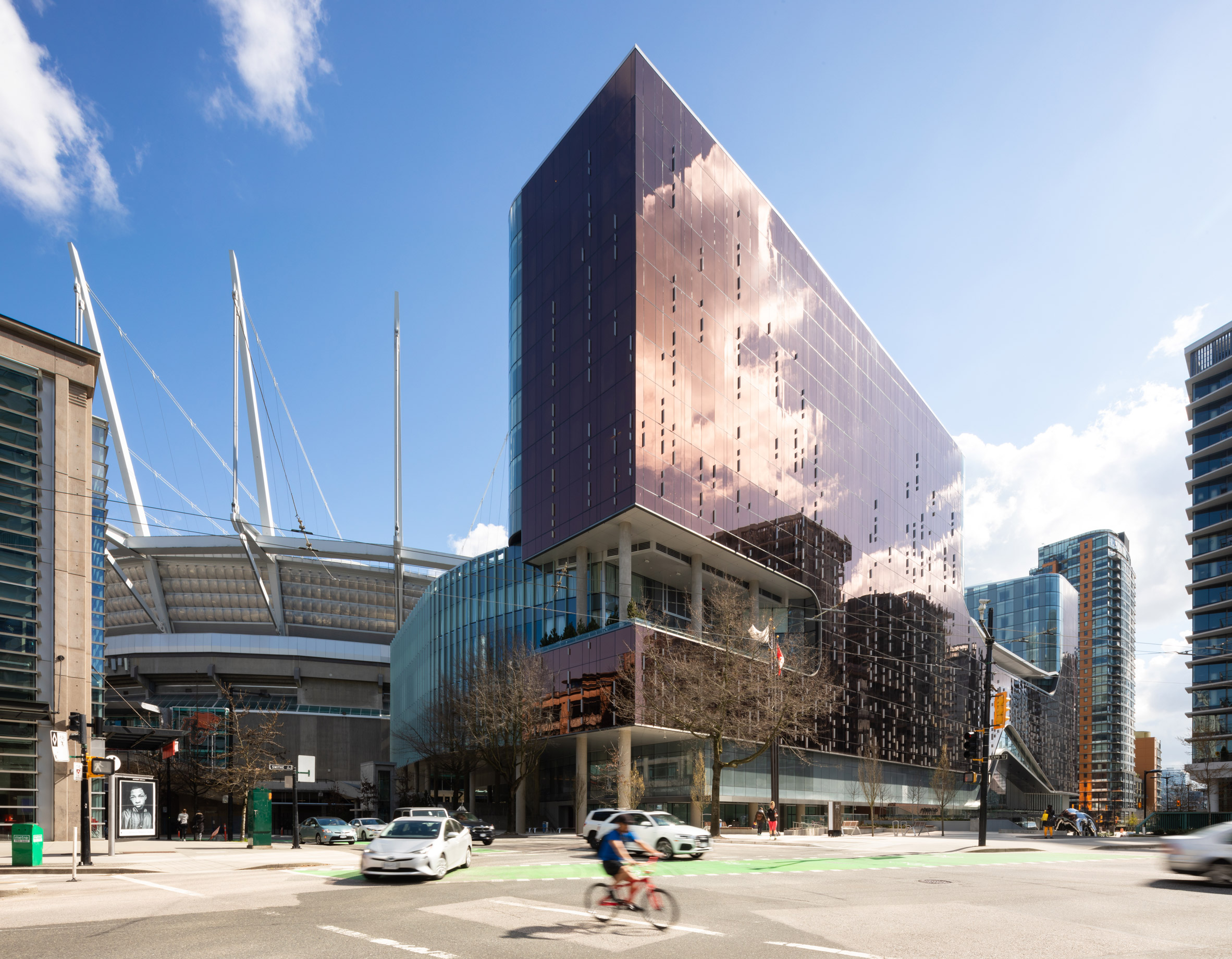 “PARQ was conceived as the missing link between the active environment of BC Place stadium and the downtown core’s thriving entertainment district,” said Maxime-Alexis Frappier of ACDF, who served as the project’s lead design architect. “We have put forward a design that not only fulfils that role, but which also captures the essence of the city and its breathtaking natural surroundings.” 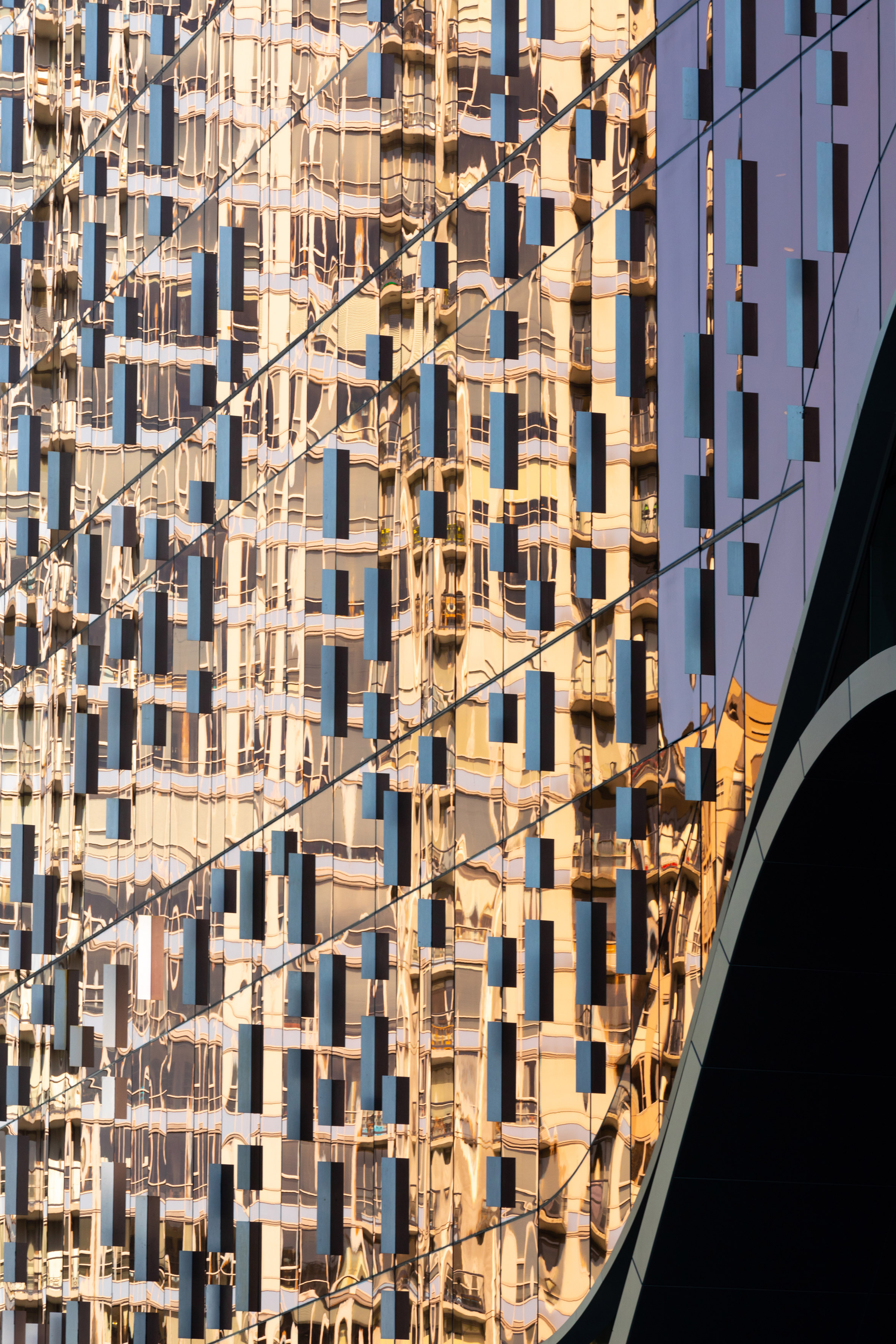 Roughly boomerang-shaped in plan, the complex consists of a multi-storey podium from which three towers emerge. The facility’s “fluid forms and dynamic composition” were influenced by the mountains, gorges and seascapes that surround Vancouver.

Varying facade treatments are meant to pay heed to the diversity in the surrounding neighbourhoods. The main, street-facing facades are wrapped in reflective, copper-tinted glass. Vertical fins are arranged in a way that evokes a pixelated image of a mountain range. 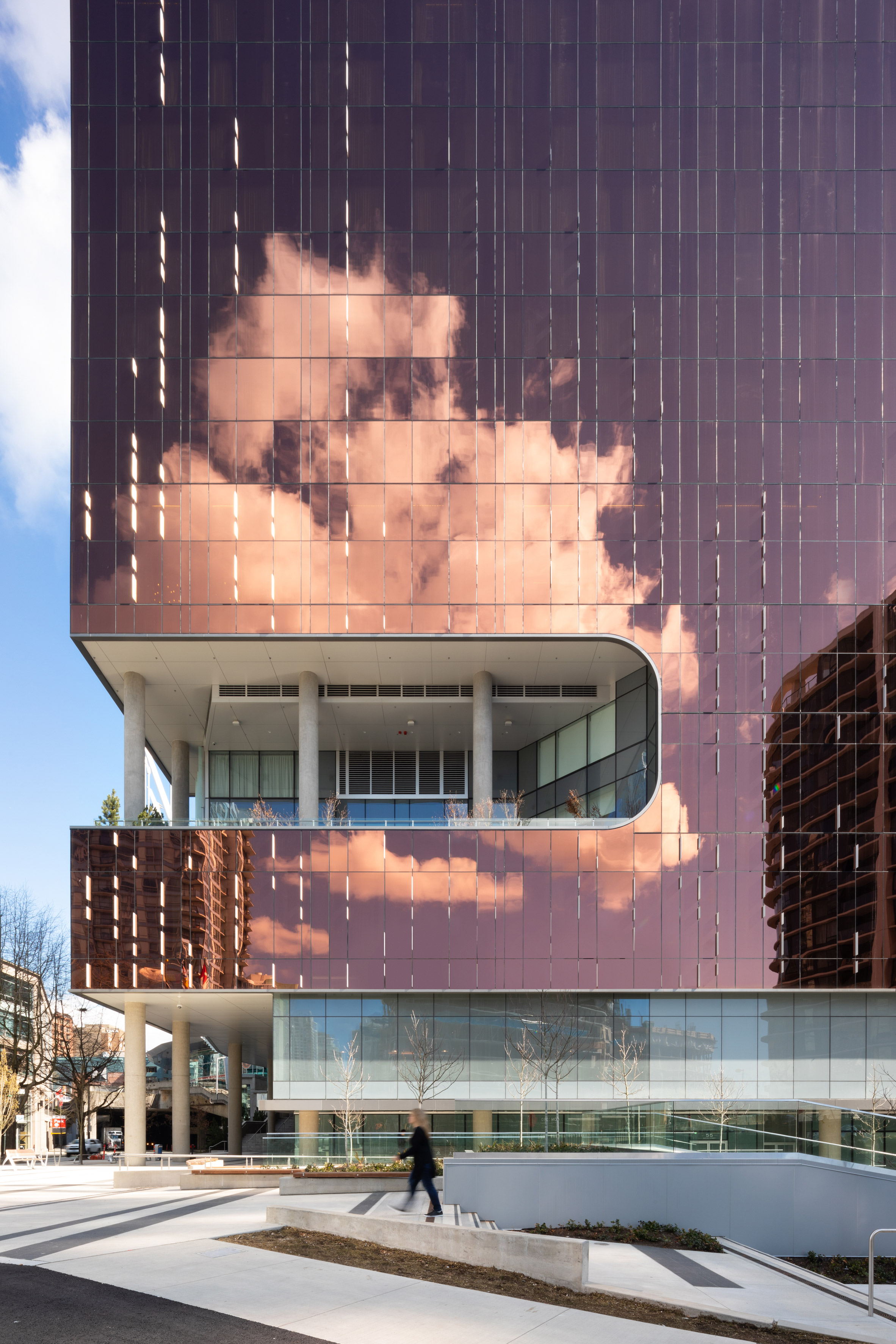 “As sunlight shines and repositions through the course of the day, the metallic louvres bring the building to life in animated ways, while their reflections ‘dance’ on the nearby waters of the Pacific Ocean,” the team said.

The other facades are sheathed in white-fritted glass. The building’s ample glazing is intended to connect visitors with the streetscape while also drawing in passers-by. 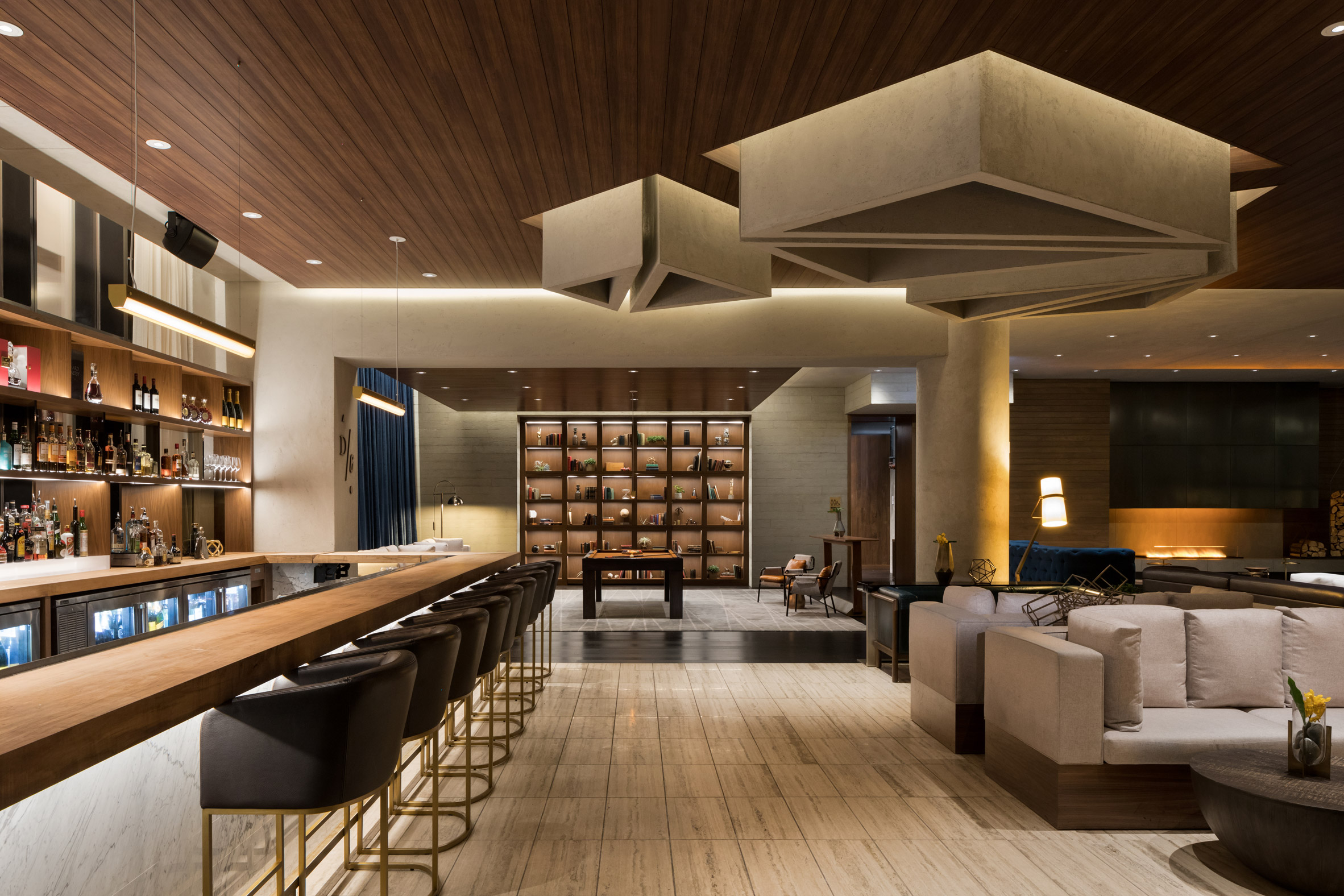 The ground level of the building contains lobbies and retail space. The casino, which totals 72,000 square feet (6,689 square metres), is spread across the second and third levels. It includes 11 private salons and four balconies offering views of the skyline. 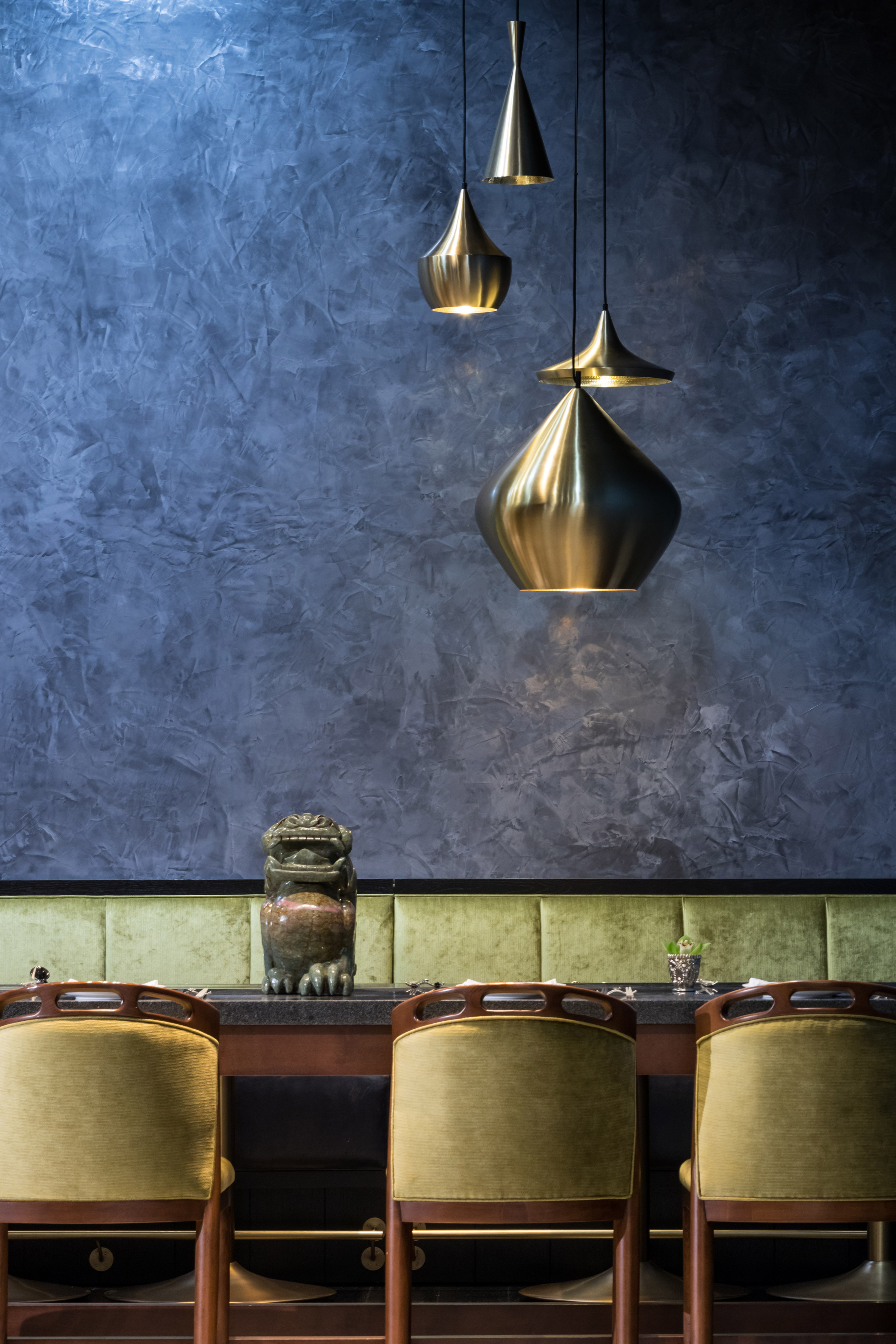 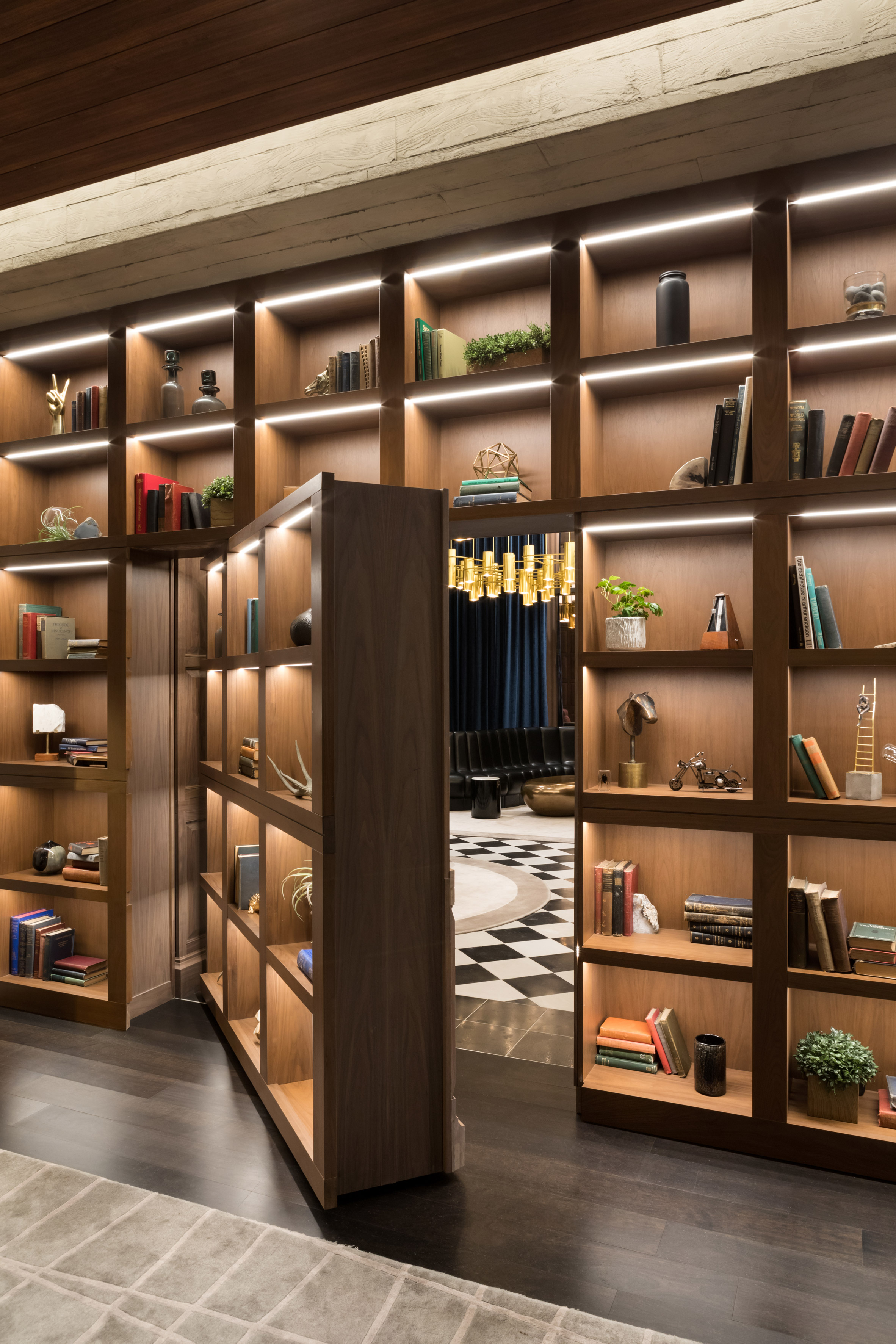 PARQ’s three towers contain the hotels. A JW Marriott Hotel occupies the twin towers on the eastern side of the complex, while the third houses The Douglas Hotel. Together, the hotels offer more than 470 guest rooms and 55 luxury suites.

The complex features an array of interior finishes. In one dining area, textured grey walls are paired with brass pendants and seating with chartreuse upholstery. 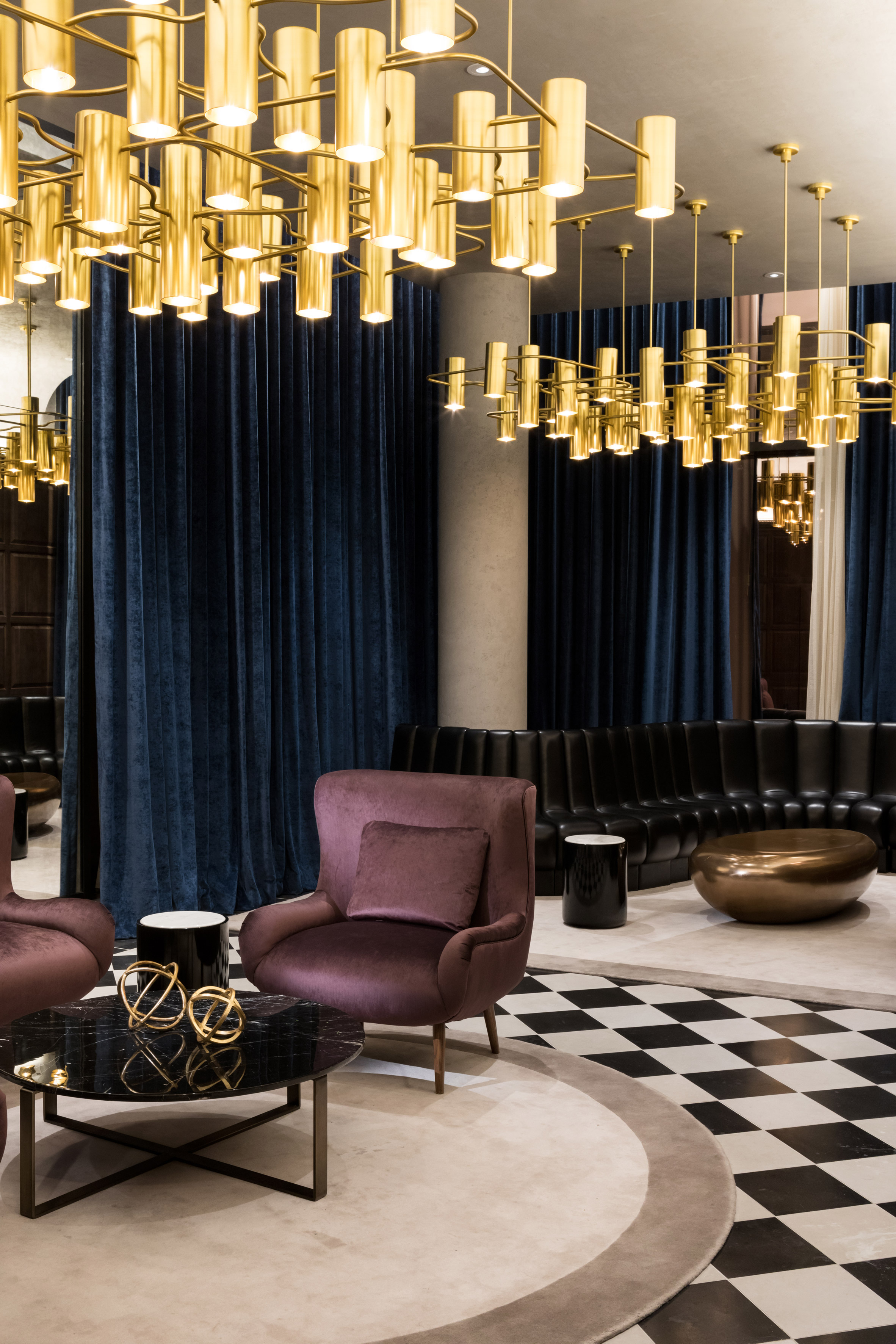 In another area, the team incorporated wooden ceiling panels, beige tiles and earth-toned decor. Part of a bookshelf acts as a secret door leading into a lounge with velvet drapery, checkered flooring and ornate lighting fixtures.

The complex also features a sizeable roof terrace with over 200 native pine trees and 15,000 local plants. 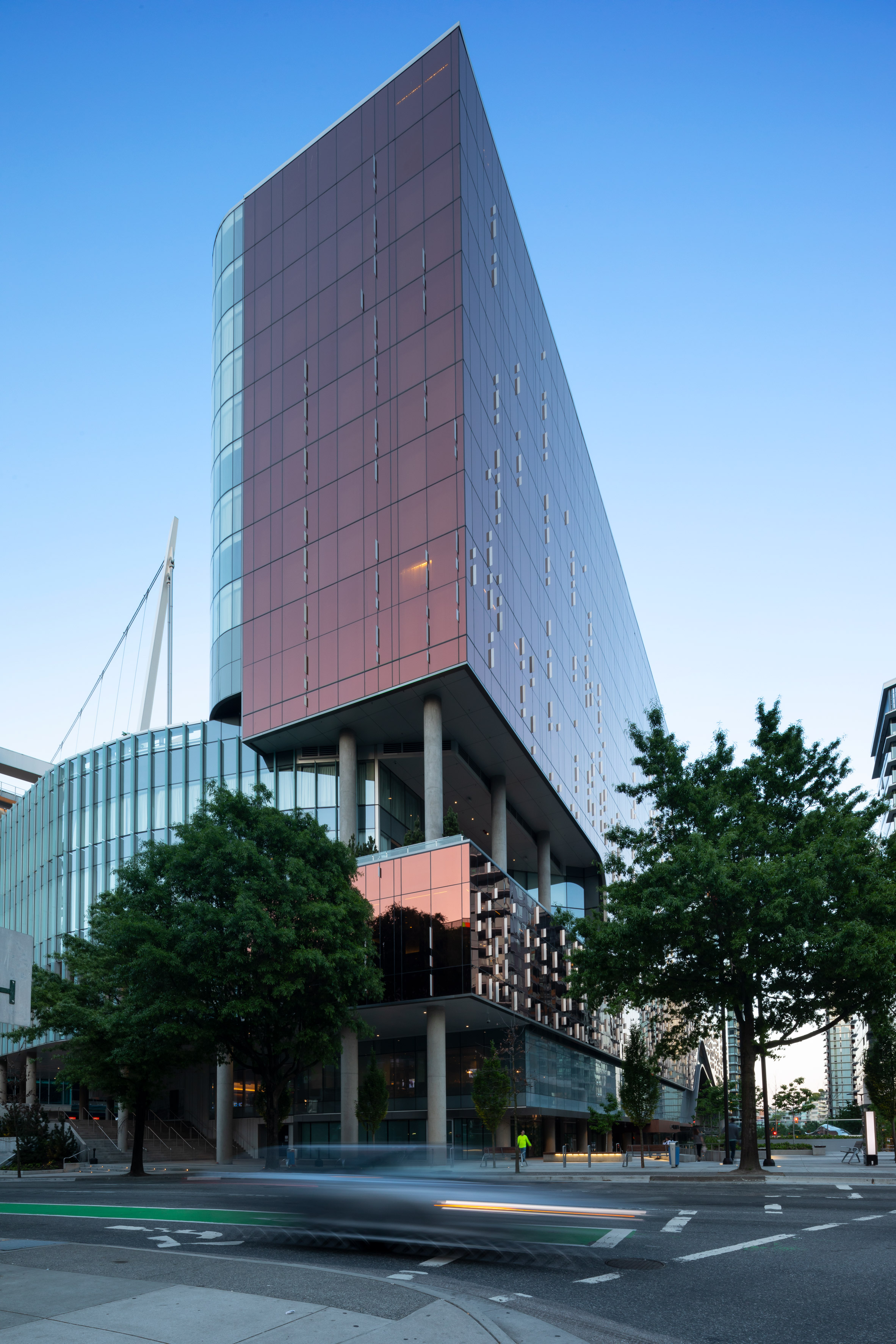 “The park adds a sustainable element to the project and is a model example of innovative use of green space,” said Frappier. “When you combine that atmosphere with the surrounding scenic views, it transports nature into the heart of an urban environment.” 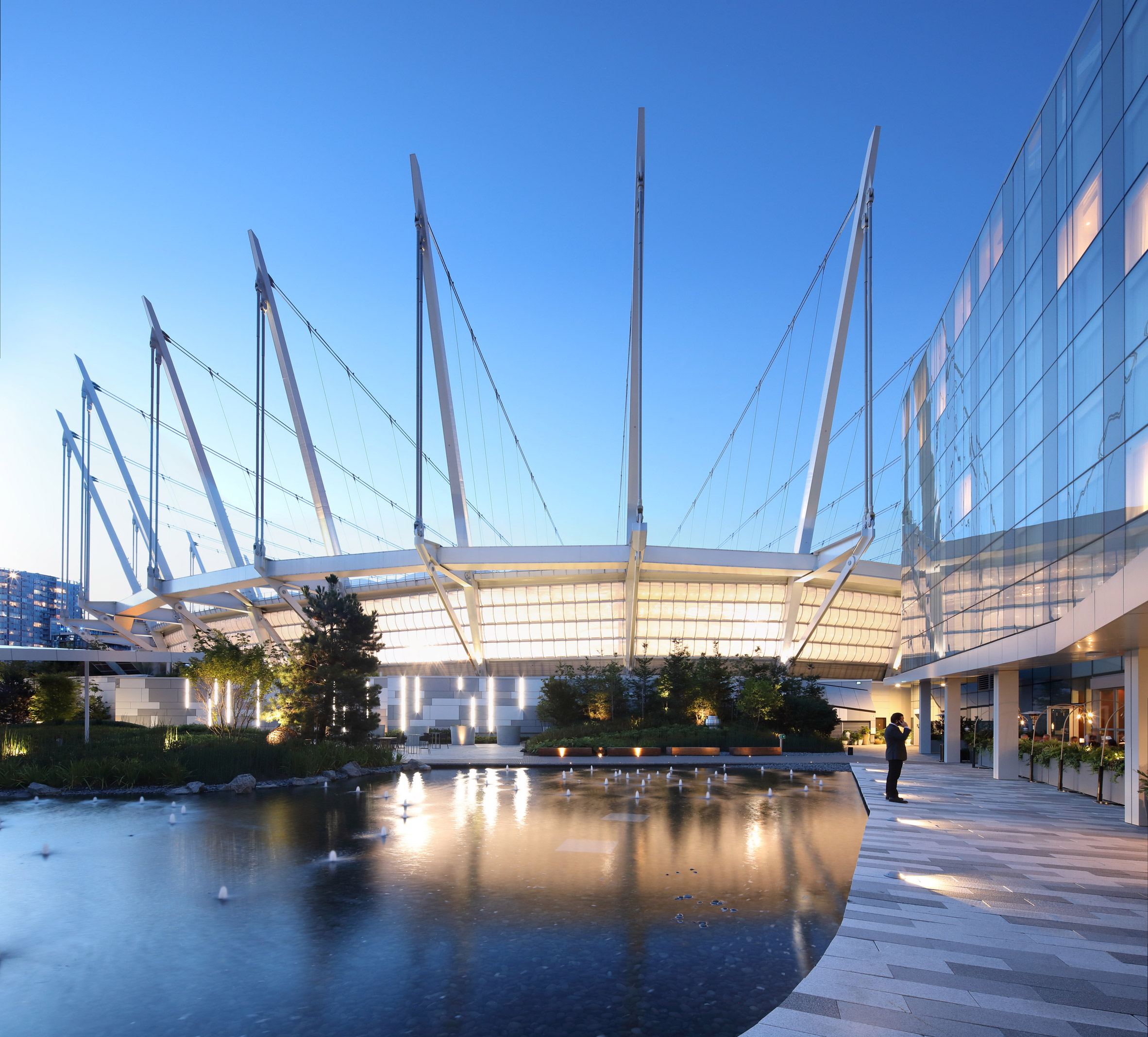 Other large projects planned for Vancouver include Barclay Village – a pair of skyscrapers by Büro Ole Scheeren that would be formed from irregularly stacked glass boxes interlaced with greenery. Japanese architect Shigeru Ban has also designed a tower for the Canadian city called Terrace House, set to become the tallest hybrid timber structure in the world once complete.